This particular integration is done with SAP CRM so that customers can raise concerns, issues etc. with company using twitter account which has a connection with SAP, so that any post posted by customer is fetched into system which then can be replied back from the CRM system with ease. This particular feature was not there earlier in CRM but from Software Component ‘BBPCRM’ From Rel. ‘713 and To Rel. ‘713’ it’s available. For ensuring the integration of social media with SAP CRM interaction center there are set of SAP notes which have manual activities that need to be done using the help of a technical expert.

So now I will be telling you in detail i.e. step by step on how to achieve the integration of SAP CRM with twitter. Below are the SAP notes that you need to download and their attachment files also.

Please do go through these notes before starting the integration.

Now I will be explaining you in detail (the required things) on how to achieve the same in layman language.

Hope this is helpful 🙂 .

First you have to activate the BC set that are specified in the note: 1859791 using the report ‘SCPR_ACTIVATE_SBCSETS’.

After the above step is done I will be explaining you different configuration that are required for social media integration and the required ones in detail for your better understanding.

So this is the area where social media configurations are done.

Now I will explain you the main part of configuration for social media integration. Here you need to maintain media name( channel code ) and the corresponding class( which I will be explaining you in detail ) that will have the code to process the tweets/post from social media.

And also you need to maintain social media user account details. This is used to distinguish the different API’s (application) ex. Like company account in Facebook. So you can maintain many API’s for integrating with SAP CRM.

You can schedule a background job to retrieve the following social media post data:

So here you need to define the agent inbox (inbox) profile that determines the following aspects of the inbox for the user role main categories.

Now the required configuration in SPRO is done for twitter integration.

Now you will have to create an API for twitter so as to access the tweets posted to this API before that you need to look into SSL and required steps for achieving twitter integration is successful.

From January 14th, 2014, connections to api.twitter.com are restricted to TLS/SSL connections only. So for this you need to provide a SSL certificate in SAP using STRUST t-code. Connecting to the API using the SSL protocol builds a safe communication channel between our servers and your application, meaning that no sensitive data can be accessed or tampered by unauthorized agents in the middle of this communication path. The certificate Verisign Class 3 Primary CA – G5 is used for the current Twitter SSL authentication which need to be upload in SAP. You can download the same using the below URL. 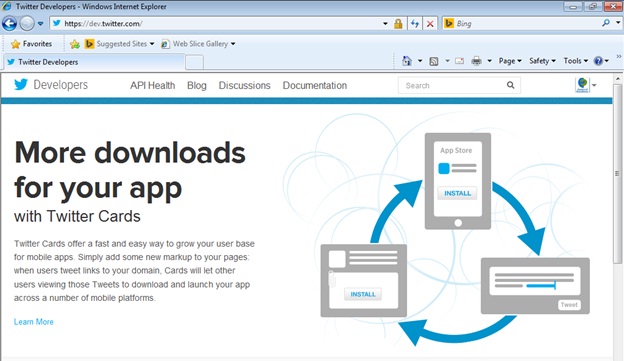 Now we need to create an application (API) for the twitter account that is being used for integration. Below is the navigation screenshot.

Here you need to create a new app as shown above.

Now you need to create the class which is mentioned in the snote: 1832480 – How to implement Twitter API for CRM Interaction Center.

After implementing the class you need to modify certain attributes and there values as show in the below screenshot.

After all this has been done you’re integration with twitter is finished 😎 😎 . Now you can run the WebUI(Interaction center) and check for the twitter tweets. Below are the screenshots for the same. 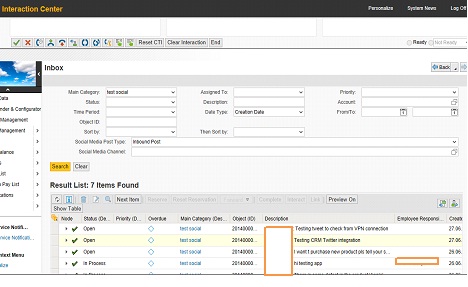 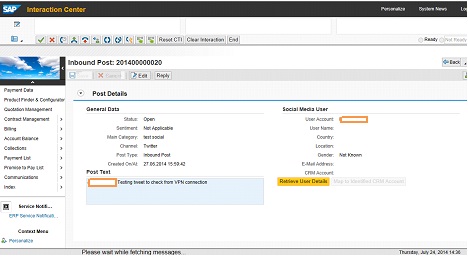 Cool stuff.. By the way, how can we bypass the proxy authentication ?

Actually proxy details are not required for twitter integration as there is SSL certificate that is available which helps in communicating with SAP & twitter app in a secured way.

Please check the SSL certificate that I have mentioned in my above blog.

Could you please discuss step by step scheduling background job.

refer to my discussion for detail: Schedule Get posts routine for Twitter posts fo... | SCN

Can someone please elaborate on the step where 'Main Category' is assigned to Agent Inbox Profile?

This is a custom main category created, but there has been no detail provided about its technical specification. I found the customizing view is 'CRMC_AUI_MAINCTT' where we need to maintain a new social profile related main category, but what would be its parameters? Any help would be appreciated.

Below is the SPRO navigation where you have to maintain "Main Category".

But my concern was in the Define Inbox Profile, you have assigned a custom main category (Z111) with the Newly created Inbox Profile.

Once it is defined at the above path, it shall be available to be assigned to the inbox profile.