SAP NetWeaver System Landscape Directory as of SAP NetWeaver AS Java 7.1 features the Full Automatic Sync feature, which is also used to retrieve data from SLD systems into the LMDB (see Demo: The Full Automatic Sync Feature in the SLD of SAP NetWeaver 7.1.
This function allows you to connect systems to automatically update data incrementally when changes occur and provides automatic conflict resolution. But what is a conflict? We see it as a conflict if data of one object – for example the meta data of a technical system – is available in different versions (temporarily), and when both versions “meet” in one repository. Without further information, it cannot be decided automatically, which version to use because there is no clear sequence of these versions. Or to put it this way: To safely replace one version with another, the new version should be a direct successor of the version to be replaced.
Figure 1 shows a conflict between two versions in a repository: 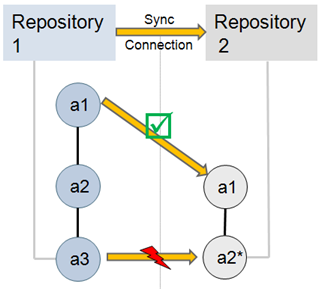 Figure 1: How do conflicts originate? Two repositories are connected to transport versions from repository 1 to repository 2:

How the conflict is handled depends on the repository.There are two different ways to solve such conflicts we should discuss here:

Sync connections can be unidirectional or bidirectional. Quite easily understandable in the first case one SLD updates the other, while in the second case both SLD systems mutually update each other incrementally once they are in sync.

The kind of connection and the way it is used influences the occurrence of conflicts. We find the following (main) use cases:

Luckily, both these scenarios have in common you would not tend to run into conflicts. In the unidirectional Content Sync scenario you would probably maintain data in the old SLD until the system switch and then work in the new SLD, while with the bidirectional setup, with synchronization running constantly, all intermediate versions would be available on both systems, so every new version is a direct successor of all others.

Nevertheless: In case you use a unidirectional Content Sync in a setup, where both SLDs are working in parallel, conflicts will become a topic to be aware of. In a bidirectional setup conflicts only occur for nearly parallel and conflicting changes of the same object in different SLD systems.

In case you use a unidirectional Content Sync, in scenarios other than migrating data once, you could run into the following situation (this in fact is the situation described generically in figure 1 in a life-like setup of landscape repositories in a landscape).

Figure 2 describes a scenario, where the best practices recommendation has not been followed: Instead of the source SLD the target SLD is ranking higher (Note: this was defined for means of discussion and should be avoided in the landscape if possible.)

Figure 2: Landscape repositories with unidirectional full automatic Content Sync. Conflict-free and conflicting update cases. Technical System “TS1” reports its data to the SLD 1; SLD 1 (low sync rank) updates the SLD 2 (higher sync rank) by Full Automatic Content Sync.
(Note that this is described for means of didcussion, and is not a recommended setup for SLD systems connected in your landscape)

Note that you can avoid conflicts, if you assign the higher rank to the source SLD.

So a system’s rank defines if it accepts changes of a different system in case of version discrepancies: Versions created in a higher ranked system will not be replaced with versions from lower ranked systems in case of conflicts.  They will be accepted if the ranks are interchanged, but switching ranks is not a valid procedure.

To avoid inconsistencies in SLD systems, follow the best practices:

Effects of changes can be identified in the LMDB change log:

See the following screenshot of a LMDB change log: For details on connections to exchange landscape data, refer to

For an overview, see Landscape Management Process section Get the Status of Your IT Landscape – Data in SLD, LMDB, and SAP Support Portal, and Its Verification

Thank your for your blog, these articles are tremendously helpful.  I am curious about setting up a central SLD on NetWeaver 7.3 AS Java.  Will we still be able to use the full automatic synchronization functionality?  All of the documentation refers to 7.1 and we are not quite ready to upgrade PI to 7.3.  Any thoughts or known issues?

thanks a lot for your kind words. As for your question: SAP NetWeaver 7.1 SLD was the first version to feature the full automatic synchronization. In the following releases it is also available. For the compatibility of SLD releases see Note 954820 - Compatibility of SLD in the system landscape. I hope that helps...