Why read this article

All of the SAP Intelligent Enterprises run their core business process using Electronic Data Interchange (EDI) with their business partners. SAP S/4HANA programs depending on the flavor (Brownfield, Greenfield or Selective Data Transition) would cause the need to retest all EDI relevant business processes.  What if you have 500 or 1000 B2B partners? Which ones to select for testing and how to make sure organizing the testing will not slow down the whole SAP S/4HANA program? Service virtualization and testing (SVT) solutions like Int4 IFTT (Certified ABAP addon for SAP Solution Manager – SAP Solman) provide the developers and functional consultants with ways to quickly simulate all B2B/EDI partners. It allows not only to quickly run test scenarios during the development (DEV) and integration (SIT) phases of the project but also run the regression testing on any non-productive environment. Not having to ask EDI partners each time for test messages or to validate the ones produced by the new SAP S/4HANA installation allows the SAP S/4HANA transformation projects to be more sustainable as projects use less resources and can be done much faster.

One of the most typical questions from SAP developers and SAP Functional Consultants is can I get a few test messages from my EDI partner to validate my development? Who can help me with my testing, who can coordinate it? With Int4 IFTT you can just open Int4 IFTT SAP transaction and simulate any any EDI partner in no time. It removes the delays caused by dependency on those your B2B partners from SAP applications and continue with your SAP S/4HANA projects to deliver it on time.

What does it mean to be EDI non-compliant?

Being compliant means your EDI business partners need to be able to understand you and you must be a reliable partner. Let’s work on a few examples of being non-compliant:

These are just a few examples of penalties from your EDI partner but what about the cost to reschedule the shipping, transport, delivery if the EDI business processes are not working?

How to save 500.000 $ for SAP S/4HANA transformation programs caused by non-compliant EDI?

According to the EDI customer survey from Figure 1 almost 20% of companies lose more than 500.000 USD per year due to poor EDI integrations and another 26% lose at least 100.000 USD. This is all without having a big impact project like SAP S/4HANA… 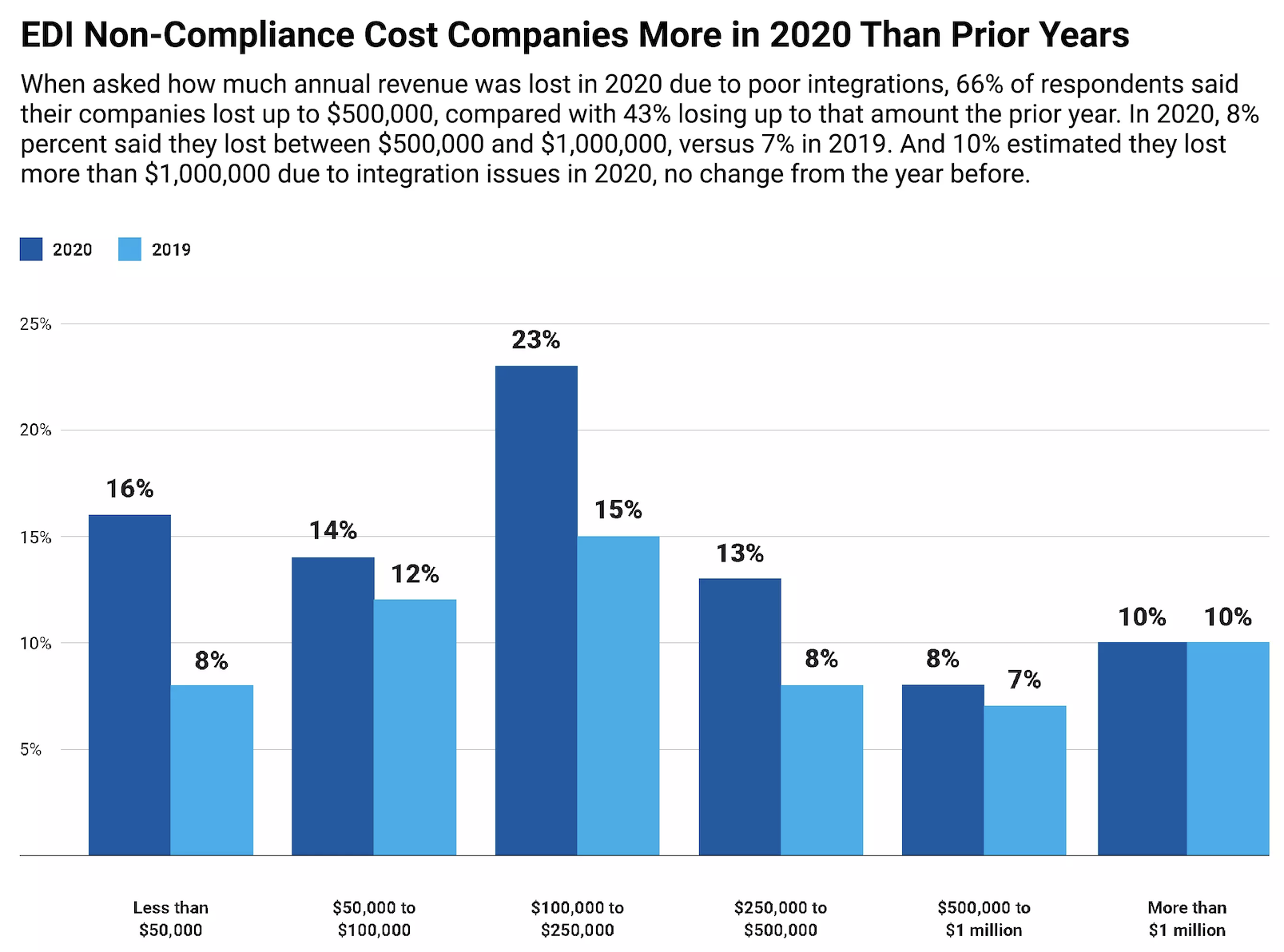 Imagine now that an SAP S/4HANA project introduces a few new business processes, the company is doing a consolidation or a carve-out or maybe even want to implement a clean core SAP S/4HANA systems. Does it mean the EDI related business processes like Order to Cash (OTC), Purchase to Pay (PTP), Logistics of any other need to be retested? No but only if you can make sure your SAP S/4HANA program budget can accommodate the EDI chargebacks and all financial penalties and basically the company does not need to sell or buy anything. In any other case testing EDI business processes will be a huge part of the program.

What does Int4 IFTT SVT do to simulate EDI partners?

Int4 IFTT being an SAP native Service Virtualization and Testing solution will simulate EDI partners to test the functional and not functional behaviour of those systems as shown in Figure 2. It will also allow capturing the electronic messages running on any kind of supported Enterprise Service Bus (SAP Process Orchestration, SAP Integration Suite, Boomi, Webmethods, Azure Integration Services) and those electronic messages can be reused for testing. 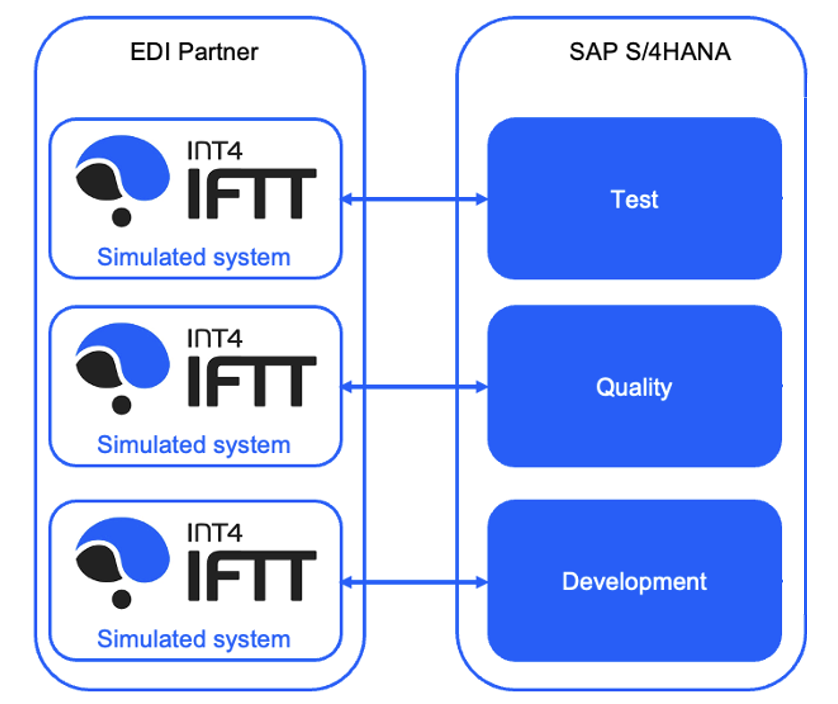 How does Int4 IFTT SVT work?

Int4 IFTT SVT was designed to support complex SAP S/4HANA transformation and technically it runs on SAP Solution Manager (SAP Solman) as a certified ABAP addon. Int4 IFTT SVT is the only enterprise level solution which can fetch messages directly from any EDI message processing engine /Enterprise Service Bus (SAP Process Orchestration, SAP Integration Suite, Boomi, Webmethods, Azure Integration Services) connected to SAP S/4HANA out of the box. Later on those messages can be reused by development and SAP functional teams to simulate the behaviour of any EDI partner as shown in Figure 3. We can take electronic messages from one landscape (production) and rerun them on any other landscape (DEV, TST).

Why an SAP EDI self-service testing is an option?

Imagine you’re a retail or an automotive company and have a huge purchasing organisation using EDI to send Purchase Orders to hundreds of your vendors. Each of your vendors has it’s own IT landscape where they do many IT projects so they ask you to send or validate EDI messages many times everyday. In order to help your vendors you need to maintain a large testing team whose only purpose is to communicate with your B2B partners to send them new EDI test messages and validate their own which are sent to your system. Why not make this an EDI self-service?

With different communicators like MS Teams, Slack, chatbots like SAP Conversational AI SAP project members or B2B partners can communicate much more easily and SAP EDI testing testing can be simply implemented as a BOT who will be executing the test cases as shown in Figure 4. Self-Service solutions give even more power to the people and can speed up any kind of SAP S/4HANA project.

Learn more in our webinar

To learn how to deliver SAP S/4HANA projects on time by simulating 3rd-party systems & EDI partners and removing the delays caused by dependency on those non-SAP applications – join our webinar on April 26.