Why read this article

Service virtualization and testing (SVT) solutions like Int4 IFTT (Certified ABAP addon for SAP Solution Manager – SAP Solman) provide the developers and functional consultants with ways to quickly simulate the interfaces of any 3rd party, non-SAP systems as well as B2B partners – EDI. This allows not only to quickly run test scenarios during the development (DEV) and integration (SIT) phases of the project but also run the regression testing on any non-productive environment. Not having to install and maintain many new test instances of non-SAP systems also allows the SAP S/4HANA transformation projects to be more sustainable as projects use less resources and can be done much faster, therefore reducing carbon footprint significantly.

How can I get a few test messages from my EDI partner or 3rd party logistic provider (3PL) to validate my development? Who can send me a few test messages from our company’s non-SAP warehouse management system? If you’re an SAP developer or SAP Functional Consultant (OTC, P2P, LE) you’ve most likely stumbled upon some of those questions quite often. Now with Int4 IFTT you can just open Int4 IFTT SAP transaction and simulate any 3rd party system and EDI partner in no time. You can finally remove the delays caused by dependency on those non-SAP applications and continue with your SAP S/4HANA projects to deliver it on time.

How many 3rd party systems does your SAP S/4HANA systems communicate with? Is that more than 20 or even 100 in many cases. Do you need to install, configure and maintain all of them for the SAP S/4HANA transformation program? Why not simulate all those systems to save all the costs and effort and at the same time speed up the SAP S/4HANA project – this is all possible with SVT like Int4 IFTT as shown in Figure 1 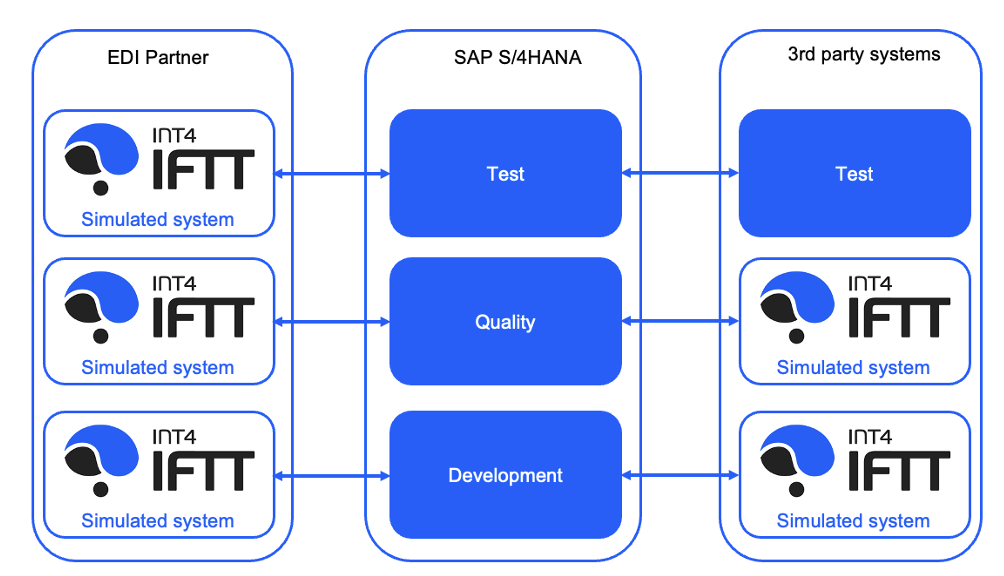 Why use Int4 IFTT SVT for SAP S/4HANA transformation programs?

Some of the problems of SAP S/4HANA transformation include: 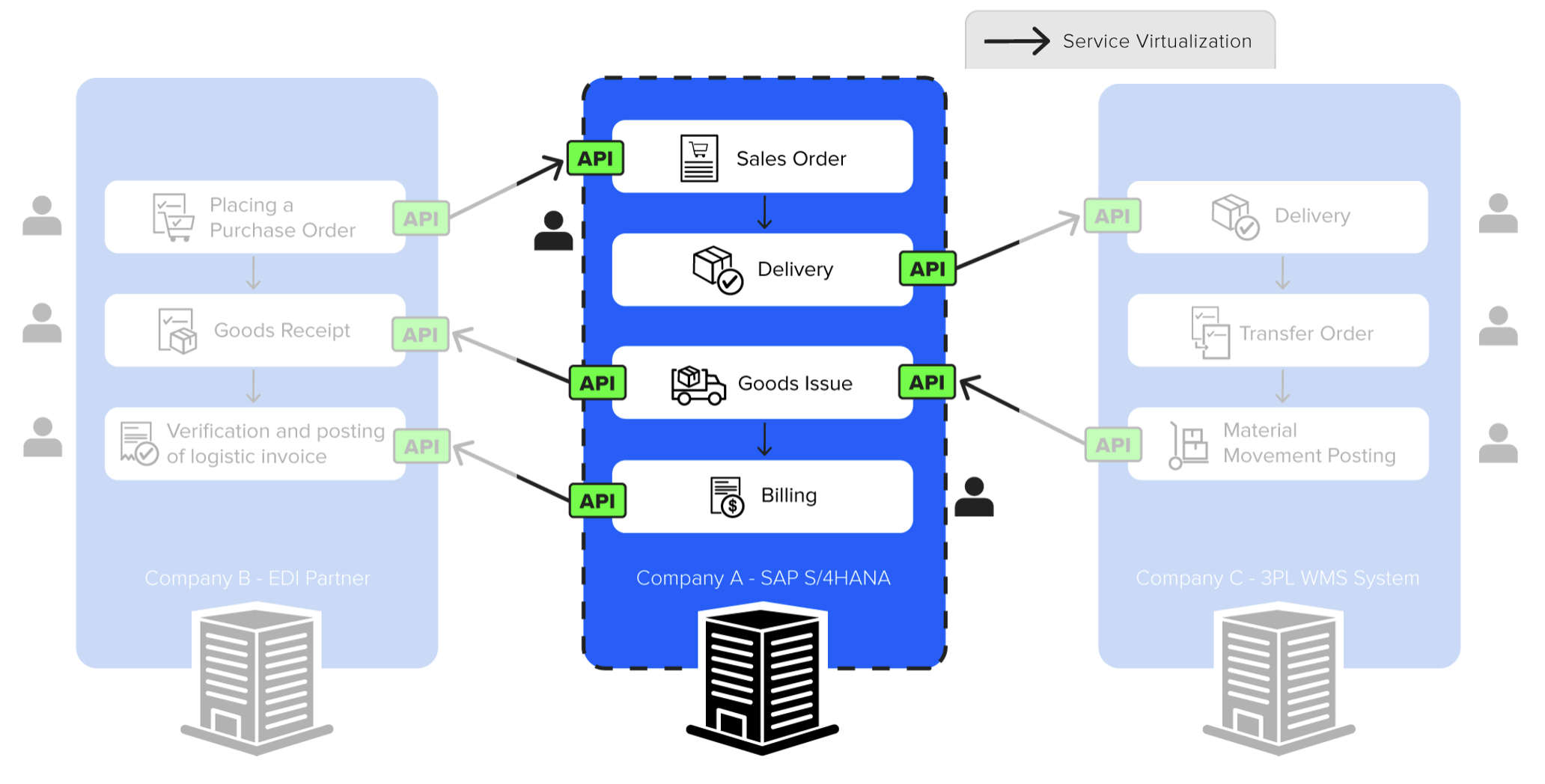 Int4 IFTT being an SAP native Service Virtualization and Testing solution will simulate 3party non-SAP applications and EDI partners to test the functional and not functional behaviour of those systems as shown in Figure 4. It will also allow capturing the electronic messages running on any kind of supported  Enterprise Service Bus (SAP Process Orchestration, SAP Integration Suite, Boomi, Webmethods, Azure Integration Services) and those electronic messages can be reused for testing. 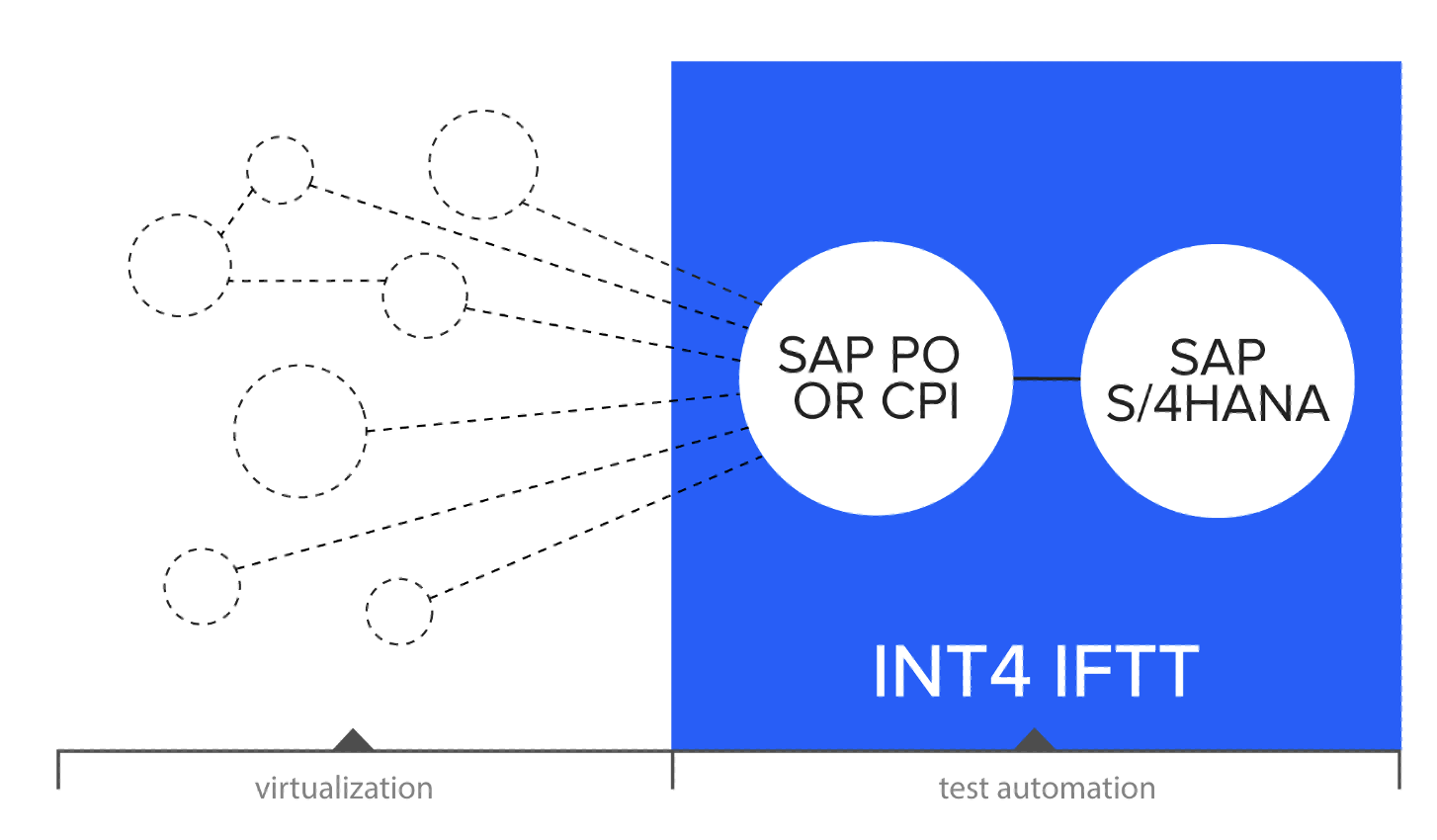 Who can use Int4 IFTT SVT for SAP S/4HANA transformation programs?

When to use use Int4 IFTT SVT for SAP S/4HANA transformation programs?

While it’s possible to use Int4 IFTT SVT for regression testing during the UAT phase of the project, some of the biggest benefits come when Int4 IFTT SVT is used much earlier in the SAP S/4HANA transformation programs – during development (DEV) and Integration (SIT) testing phases as shown in Figure 5. 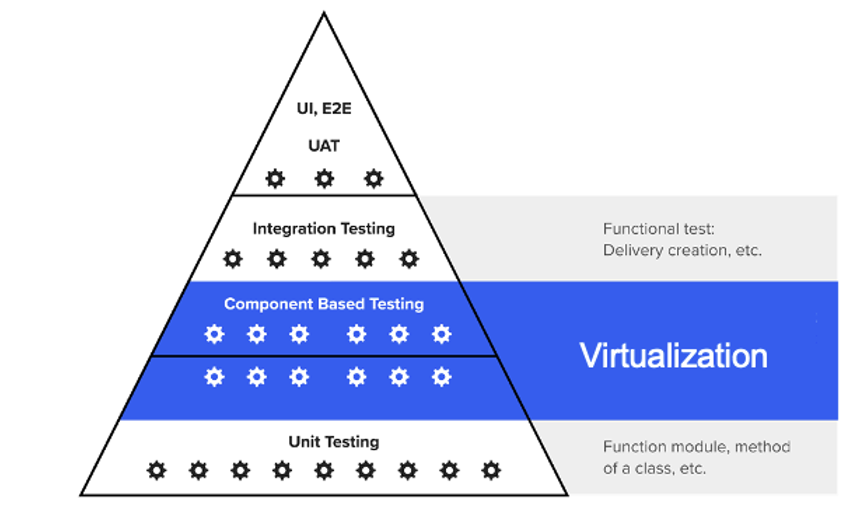 During those initial phases of the project 3rd party systems and EDI partners are not available so it’s amazingly difficult to test any real end to end scenarios. Int4 IFTT STV simulation mode will reverse it completely. Now any developer or SAP functional consultant can easily himself/herself simulate any 3rd party system and EDI partner in a matter of minutes. Quality testing of SAP S/4HANA is done earlier, more often and developers and functional consultants love it.

How does Int4 IFTT SVT work?

Technically it runs on SAP Solution Manager (SAP Solman) as a certified ABAP addon. Being able to do service virtualization (simulate other systems) was one thing but another one was to make sure everyone can create test cases very quickly. That’s why Int4 IFTT SVT is the only enterprise level solution which can fetch messages directly from any Enterprise Service Bus (SAP Process Orchestration, SAP Integration Suite, Boomi, Webmethods, Azure Integration Services) connected to SAP S/4HANA out of the box. Later on those messages can be reused by development and SAP functional teams to simulate the behavior of any 3rd party non-SAP application or EDI partner as shown in Figure 6. We can take electronic messages from one landscape (production) and rerun them on any other landscape (DEV, TST).

Creating thousands of test cases with Int4 IFTT SVT is as simple as selecting electronic messages and pressing a button to download them to the Int4 IFTT SVT repository.

Learn more in our webinar

To learn how to deliver SAP S/4HANA projects on time by simulating 3rd-party systems & EDI partners and removing the delays caused by dependency on those non-SAP applications – join our webinar on April 26.

Thank you @Michal Krawczyk very well articulated, SVT seems very interesting and looking forward to work on it, thanks