In your daily work as an SAP Transport Administrator working with ABAP systems, you might already have experienced one of the following situations during or after the import of transports into your production system:

If you have encountered these issues in the past, we strongly recommend you to utilize the proactive transport checks and integrate them into your software development/deployment process. They are included in the ST-PI software component for several years now, are free of charge, must not be configured and are ready to be used out of the box.

What checks are there?

In total there are 5 proactive transport checks available which will be explained in the upcoming paragraphs.

The check runs between the import target system and the closest system before (e.g., QAS<>PRD). For this check the closest system before the target system should be used as source system, because the check always compares the active object version in the system and not the historic object version in particular transport requests. In the development system there might already be newer object versions which are not relevant for the planned import.

If a correction transport is part of the import queue, then no error or warning is shown. For example, transport 1 and 2 are in the wrong sequence. But finally transport 3 is supposed to be imported with the final object version, the conflict between transport 1 and 2 is not shown.

The Import Time Check analyzes how long the import of the selected transports took in the reference system by summing up the import durations based on the logfiles and estimates the time it will take to import them into the target system. As a prerequisite the selected transports must already be imported into the reference system. Often transports are imported individually into the test systems and shall be imported via Import All into the production system. In that case the import time in production can be expected to be smaller than in the test system.

The check runs between the import target system and the closest system before (e.g., QAS<>PRD).

The Online Import Check analyzes the transported objects and estimates whether they can be safely imported into the production system during uptime when end users are working, background jobs are running and the remaining day-to-day activities are still ongoing. Then the Online Import Check identifies the dependent objects of the transported objects and checks the usage profile of all objects. For tables the number of table accesses per hour, table changes per hour and the table size in KB is shown. For reports the number of report execution steps per hour is shown. In addition, you can maintain a list of critical objects with regard to online import in table /SDF/OI_CRITOBJ in production system. In the end, suitable timeframes are displayed with low activity in which the transported objects can be imported. This way, the import process is less likely not be disturbed by uptime activities.

As a prerequisite you should collect the table call statistics and the report execution statistics in the production system for one week as described in the attachment of note 2475591. Without this information you will only get limited results.

The check runs between the development system and production system (DEV <> PRD).

How can the checks be executed?

The proactive transport checks can be executed in the Solution Manager or in the managed systems directly by using transaction /SDF/TRCHECK or report /SDF/CMO_TR_CHECK. As a prerequisite it must be ensured that the note(s) mentioned in SAP Note 2475591 are implemented in the system in which the check should run in and the two systems which are declared as the source and target system. If the checks are executed in SAP Solution Manager, the TMW or READ standard roles should be up to date according to SAP Note 2257213.

The screen to execute the proactive transport checks looks like the following: 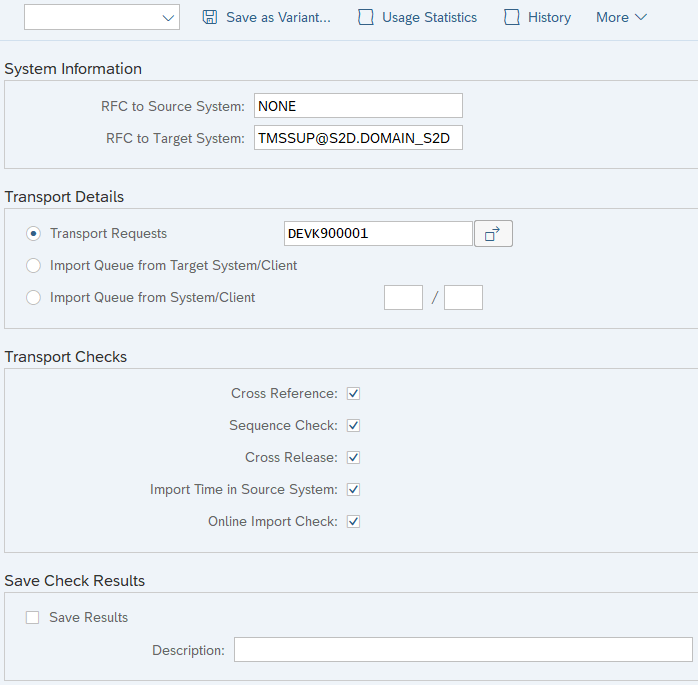 Transport Details
One or more transports can then be entered. The list of transports can also be retrieved from the import queue of the target system or any system in the transport domain, including a virtual system. It is important to also specify the client and the RFC connection used must also point to this client.

Transport Checks
Finally, the transport checks themselves must be selected, meaning you must specify which checks should be performed.

Save Check Results
Optionally, you can save the check results and later access them by pressing the “History” button at the top right corner of the screen.

An example output of the Cross Reference Check looks like the following:

Integration in the software deployment process

The following picture provides a good overview of how the proactive transport checks should be integrated into the transport landscape:

The proactive transport checks can also be executed with the Guided Self Service Transport Execution Analysis for Projects (TEAP).

To summarize, the proactive transport checks are described again in a brief manner:

If you have any questions or need assistance, you can contact us.