This blog is part of a series of tutorials explaining how to write serverless functions using the Functions-as-a-Service offering in SAP Cloud Platform Serverless Runtime
Nice.

In the previous tutorial we learned how to extract secret sensitive values from the code into some property files
We defined secret and config maps to store the sensitive values
Nice.
But when the time has come to move from silly prototypes to productive projects, then we want… no: YOU want (because I continue with silly examples) to upload your project to GIT (or similar) and you don’t want to upload files with passwords etc

FaaS has a solution for it: it supports values-files
Nice.

Now we only need to go through a silly example to learn how to do it
Nice.

Note that this tutorial is only possible for local development, such that it is a

to go through the 2 local tutorials, to learn about xfsrt-cli and faas-sdk

Another prerequisite is the usual blabla that you have to be familiar, etc, so please don’t ask me “What is FaaS”, and instead go through some of my tutorials

Although this tutorial is based on the previous one, you can skip that silly top-secret-blog and use your own project, as long as it has any secrets and configs

Sorry for the wrong wording:
we don’t create a project, we download the project which we created in previous blog, from Extension Center to our local file system
We go to Extension Center, open our project and press the “download” button Correct wording.
But not good.
In fact, we don’t create that file:
We let the faas-sdk generate it

On command line, we jump into the project folder, then execute the following command:

Note:
We can use abbreviation -y

The command will generate the .yaml file with the given name in the specified folder.
If you don’t specify a folder, then a folder with name “deploy” will be generated.

In our case, we get a warning.
Reason: for a config map, we used a file extension which is unknown to the parser.
It was skipped, but that doesn’t matter for us. it doesn’t contain sensitive information, so we don’t need to extract the content into the values-file

What has happened?
The init-values command parses the faas.json file and collects all secrets and configs which are declared there (also registered services).
In addition, all files which are found are listed as keys with the file-content as values
All is pulled out of the project and pushed into one values-file 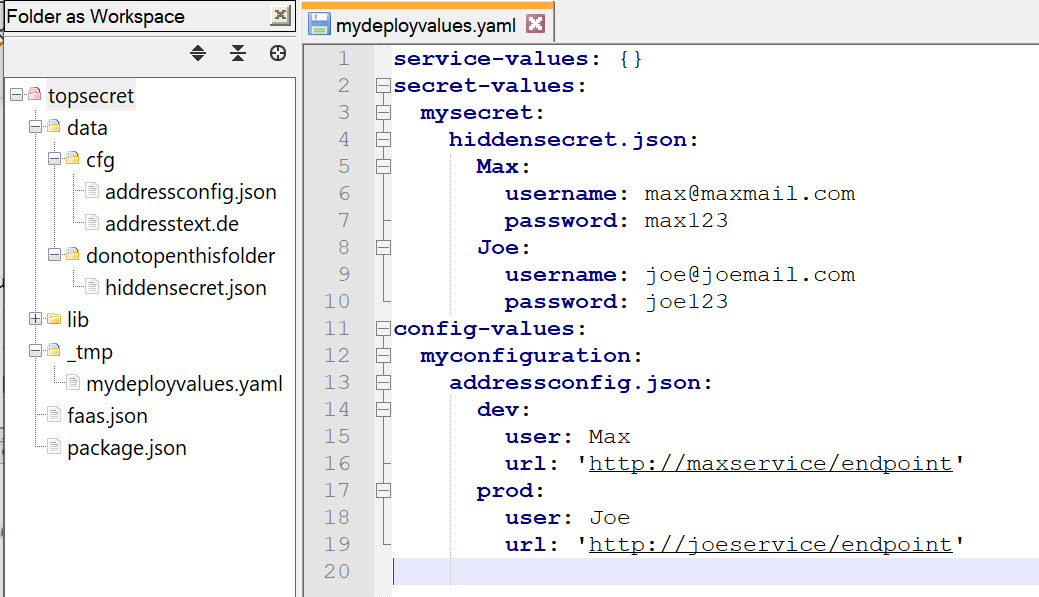 The title of this chapter could also be replaced by:
“Extract the values”
Or
“Move the sensitive content from all files of secrets and config maps to the new values-file”

Anyways, the next step is to fill the generated values-file with the sensitive information

In our case, it is already there.
But if you start a project from scratch – in future – you might create the secrets with placeholders instead of passwords

OK, in our example, we now have to delete all passwords etc from our secrets and configs

We open hiddensecret.json, delete the values for “username” and “password” and replace them with anything silly that comes into our mind 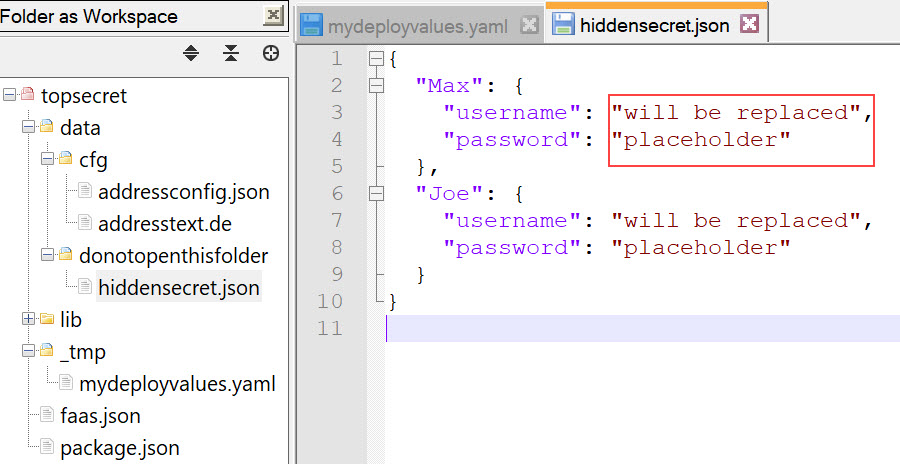 Looks as expected.
Isn’t it a nice feature? Our placeholders are replaced with the real values during deployment

We’ve learned how to move sensitive information out of the secrets into a values file
Reason: secrets are part of the dev project and need to be uploaded to GIT
The values-file mechanism helps to keep sensitive information out of GIT
The FaaS SDK supports with generation of the values-file
The XFRST-CLI allows to deploy with values-files parameter
The Extension Center does (currently) not offer any support here
Nice.