This blog series is meant to help you to plan and set up your landscape and life cycle management in SAP Business Technology Platform (BTP) ABAP Environment – formerly known as SAP Cloud Platform, ABAP Environment – since this differs from the setup you are used to in on premise ABAP systems.

It is based on the blog post Software Lifecycle Management for SAP Cloud Platform ABAP Environment by Thomas Schneider and on tests that we have performed in the integration team that is testing SAP BTP ABAP environment end-2-end.

You will learn which role software components do play here and which possibilities you have for transportation of your developments from your development system into your production system.

In a second blog post  SAP Cloud Platform, ABAP Environment – Lifecycle Management – sample scenarios for three different system landscapes it is discussed how these can address the needs in your development project in the ABAP environment of SAP Cloud Platform.

Some examples for the most common use cases and setups will be explained as well. 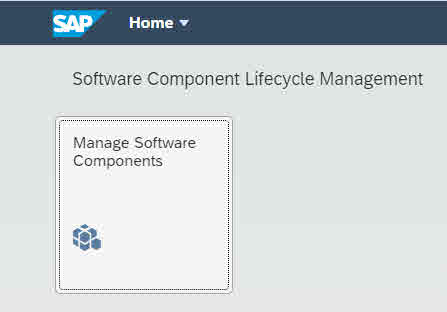 The Manage Software Component app lets me search for the software component using a search field.

When a software component is created using the Manage Software Component app this in turn creates a top-level package ZRAP_GENERATOR_SWC of type structure in your ABAP system.

Note that your development can also be loosely coupled in different software components.

You must not create objects in the structure package. You have to create a sub-package of type development first to start developing.

You should consider the following restrictions:

You create your software components in the development system:

There are two git-based transport mechanisms in the ABAP environment.

Git-based CTS (gCTS) is the evolution of the classical Change and Transport Management System (CTS). It is the recommended approach for transporting objects between ABAP systems in your global account. It offers built-in and easy to use functionalities provided by the Manage Software Components app in your SAP Fiori launchpad.

abapGit is an open-source Git client that allows you to import existing code into your ABAP system. You should use it for the following use cases:

For a quick start on transportation, see tutorial Transport a Software Component Between Two ABAP Systems.

To better understand how software lifecycle management with gCTS in the ABAP environment can be implemented, let’s start off with some basic concepts and terms.

Git is a distributed version-control system.

Distributed version control is a form in which development objects and all their versions and metadata are mirrored from a central place to every developer’s computer. The developer can switch locally and offline between different versions and change all of them before updating the central originals later.

A Repository is a collection of objects, their directory structure, and metadata, for example, a historical record of changes in the repository, a set of commit objects, and a set of references to commit objects.

Git repository branches can be used to control the flow of changes through the test and production landscape. They are used to separate changes from each other, which shall or might not be delivered together (i.e. development vs. correction, feature A vs. feature B). A branch is created on the current state of another branch, the parent branch, and reflected by a new copy of all included objects. Depending on which branch is supposed to be changed, the corresponding copy is worked on.

Pulling means getting the code that is currently in the remote repository into the local repository.

Pushing means getting the code that is currently in the local repository into the remote repository.

Contains the changed files that were pushed as well as a description and information about which user performed the commit and when.

Checking out means that, if several branches are available, the one that is selected is added to the working tree. The working tree consists of the objects of the branch you are currently working on. It contains the state of these objects since they were last pulled and the changes that were made locally but are not yet pushed to the central remote repository. This checked out branch/working tree is what is displayed in the application to edit the objects.

ABAP and ABAP with gCTS

SAP Cloud Platform offers a service called “ABAP System (abap)”. If you want to develop with ABAP in SAP Cloud Platform, you have to create an instance of that service, see Create an ABAP System. This service instance provides the ABAP system that you are developing in. The terms ABAP system and ABAP instance can and are often used synonymously, however, in this blog post, we stick to the term ABAP system. 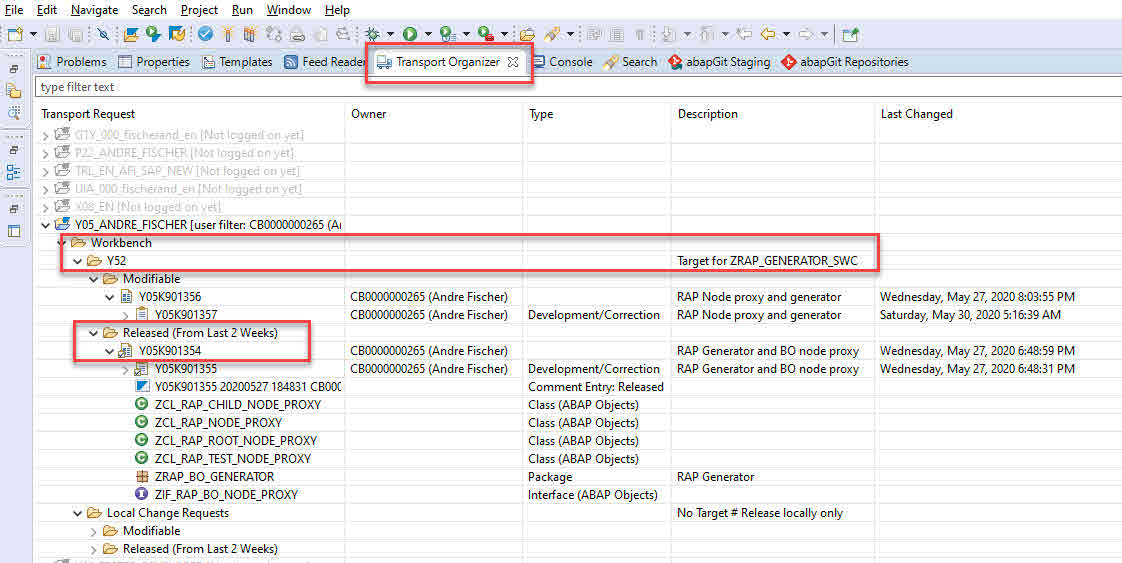 In the Manage Software Component app we can see the number Y05K901354 of the transport request in the Last Commit Message: [Y05K901354] RAP Generator and BO node proxy

Note that transport requests cannot be imported selectively into subsequent ABAP systems but as part of software component branches their changes were added to.

gCTS and the Manage Software Components app in the ABAP environment provide a simplified git, adapted to the possibilities of ABAP. This means:

Setting Up and Working with your Landscape

In general, the number of ABAP systems in your landscape is the result of the processes (development (DEV), quality assurance (QAS), and production (PRD)) that need to run in parallel and the number of branches of your biggest software component that is worked on or tested in parallel.

Note: Depending on your organization, the tasks of this role can be performed by automatic test tools, developers, or dedicated persons that are responsible for executing manual tests .

Since it sounds that gCTS is quite a restricted Git version, what are the advantage of gCTS over the "'classic" CTS?

Seems to me that git based workflows only offer significant advantages when one can freely jump from branch to branch.

This pretty much requires a different box per developer (kind of, multiple developers can share the same box as long as they work on different software components). I only see it working with (almost) fully automated provision of dev boxes, and really struggle to see it play with TMS.

What sort of workflow are you proposing?

You hit the nail on the head. We need fully automated provisioning of dev boxes, but it's not yet 100% clear how to achieve it 🙂 There are some experiments with delivering dev boxes as docker images carrying nightly snapshots of a consolidation system (a systems with all repos up to date with their remote masters). If you are going to ask about test data, I will reply that for most of the cases, developers should be happy with mocked data e.g. OpenSQL Test Doubles - which is delivered with the code in git repos. The dev boxes can be deployed on developer machines (pure ABAP on HANA works fine with 32GB, S4HANA works with 64GB but it's better to use 100GB) or in whatever IaaS (K8s, OpenStack, ...)

Thanks André, a very good intro to bring the Git and the ABAP terms together. Not an easy job!

This article applies to the ABAP Environment in SAP BTP (=cloud).

Do it doesn't apply to pn premise releases such as SAP S/4HANA 1909.

Congratulations on the blog. I have a question.

Where I can find the SAP Fiori app Manage Software Components?  I think it is in the cockpit ABAP in btp environment but I don´t find it.

When is the Badi implementation possible for gCTS on SteamPunk? I see that there is SCTS_GCTS_ENHANCEMENTS(Enhancement Spot for gCTS) but no released BAdI definitions yet.

We're using gCTS on our SteamPunk and would like to change some behaviors of pulling/pushing.