SAP Cloud Platform ABAP Environment is available for one year now, and users are running more and more productive apps in this environment. Due to the criticality of changes, customers maintain and verify changes of custom application in development and/or test/quality systems first, before they transfer the verified content in a controlled way to the production system. Thus, software lifecycle management is getting a critical aspect.
A tutorial Transport a Software Component Between Two ABAP Systems is available on the technical aspects of the software lifecycle management. In this blog post, I want to give some more background on the topic.

Before we start digging in the details of software lifecycle management, I must spend some words on abapGit and gCTS. Two independent solutions were started in parallel to address the usage of Git in ABAP, one coming from the open source community (abapGit) and the other from SAP itself (gCTS).

With this blog I do not want to discuss the pros and cons of the 2 solutions, but concentrate on clarifying the use cases. Due to the availability and architecture, abapGit and gCTS fulfill complementary use cases in the context of the SAP Cloud Platform ABAP Environment. (As we are concentrating on SAP Cloud Platform ABAP Environment here, I want to list the use cases that are related to this environment here only).

For abapGit, we see the use cases:

gCTS is used for transports between systems within an SAP Cloud Platform global account. The remainder of this blog posts concentrates on this scenario.

In the appendix of this blog post, I have added links for further reading on abapGit and gCTS.

Setting Up Your Software Lifecycle Management

Figure 1 shows the classical 3-system setup of a development system, test system and production system. Each system is located in a dedicated sub-account (or space) so that all resources/services that belong to the development, test, or production environment are separated from each other (e.g. additional services such as UIs, connectivity, etc.). The setup can be enhanced by pre-production systems, multiple test systems, etc. Test systems can be provisioned on demand (temporary) or permanently. 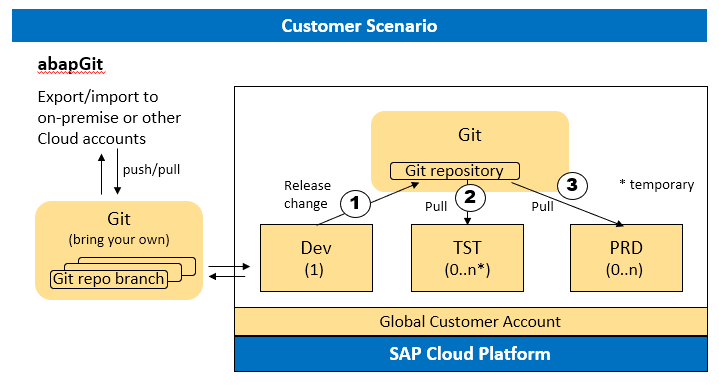 Figure 1: Export / import via Git repository between systems in an SAP Cloud Platform global account (gCTS) and beyond (abapGit)

During system setup, you can set the parameter is_development_allowed. If this parameter is set to false, the custom software components are set to not modifiable. Software changes can only be imported via transport management. See: documentation.

In the development system, you create your software components:

The steps are described in the tutorial Transport a Software Component Between Two ABAP Systems in detail.

You can use ABAP namespace in SAP Cloud Platform ABAP Environment. If you have registered a namespace at SAP, it will be provided automatically during provisioning. For customer projects, a namespace is optional.

For an SAP Cloud Platform ABAP Environment, a Git repository for gCTS is automatically configured, when you provision an ABAP instance. It is completely managed by the ABAP server (with the Fiori app “Manage Software Components” or with the communication scenario “Test Integration”, see below). This means, users of the ABAP Environment do not have direct access to the Git repository, but the access is tunneled through the ABAP server. This approach has the advantage for you, that the configuration and management of Git is completely invisible for you, and you as a developer can start immediately using the transport management without configuration. The visibility of the Git repository is restricted to SAP Cloud Platform ABAP Environment systems that belong to one global account. On the other hand, the approach restricts the Git functionality to the features that are exposed by the ABAP server. For abapGit, you bring your own Git, which is just the opposite approach, meaning that you have all its flexibility and configuration options.

Basic change logging using the “traditional” ABAP server capabilities is available in the development system such as:

Use the Fiori app “Manage Software Components” for import (pull) of the software component into test or production systems. In contrast to the “traditional” CTS, you cannot import single transports, but only the latest version of the Git repository.

Git repository branches can be used to control the flow of changes through the test and production landscape. Once tests are successfully completed, a new release branch is created, which can be pulled (imported) into the production system. This feature will allow better control of changes, which are applied to production systems (Figure 2). 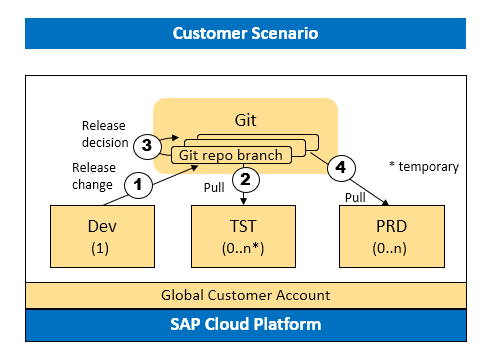 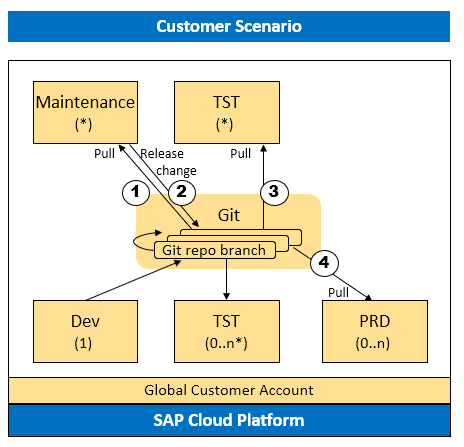 The use of Git as the single source of truth and the ability of providing und decommissioning ready-to-use ABAP systems opens the opportunity for modern continuous integration / continuous delivery (CI/CD) approaches. SAP will invest in this direction and – although it is not mandatory for customers to follow this approach – we recommend that customers should investigate in this approach.

The communication scenario “Test Integration” offers services, which can be used as part of a CI test pipeline. SAP deliveres service for creation/configuration/deletion of ABAP systems, triggering an import of objects of a software component from a Git repository, run ATC checks, etc. The blog post CI/CD Tools for SAP Cloud Platform ABAP Environment  describes the topic in detail. You can find also links in the appendix.

Two days ago i searched for „abapGIT vs. gCTS“. Thanks for going into detail on that topic.

Is it possible to use an custom git installation with the software component instead of the hidden one that is created automaticly?

no, not as of today

Thanks for the explanation. Together with the information you provided in the partner workshop I have a much clearer picture of the planned use-case differences between gCTS and abapGit.

One question, though: Are there any plans to extend the git support in SAP systems to a point where branched development becomes possible similar to how a developer works with git in other languages?
In theory that would be possible if the HANA DB includes a transparent "objects per user" layer (similar to the client in todays systems) that defaults to the main "Branch" if no user object exists, would it not?

This is an interesting idea (“objects per user” layer), but it would require fundamental changes in the ABAP system.

True, it would require fundamental changes.
But as long as you state “an interesting idea”, I won’t give up hope

Plus: If done right it would be almost transparent to existing systems.

Thanks for the great explanation!

Do you have an estimate when the following features will be available:

Also am I understanding the following, concerning the service released in 1911, correcty:

Thank you very much and I look forward to your reply.

Unfortunately I cannot comment on the product roadmap and the availability of features. But all 4 points are well known, and SAP must provide answer for them. Please refer to the official roadmap. The link to the last roadmap is https://blogs.sap.com/2019/06/19/the-abap-platform-strategy/ , but this is outdated. A new roadmap should be available within the next weeks. I will comment on the updates regarding gCTS and abapGit here.

Now your last question on an "bring your own Git" approach for gCTS and SAP Cloud Platform ABAP Environment. This is of course a valid requirement, but currently the error handling of gCTS is simply not not good enough for a Cloud product. Let me explain: gCTS in SAP Cloud Platform ABAP Environment supports a wide scope of dev/customizing objects, and it is supposed to be used for imports into dev/test and prod systems. If we open up Git for gCTS, developers will be able to manipulate the files (e.g. doing fixes, cherry picking, ... in Git). This introduces a complete new class of error situations for the ABAP transport system. Unfortunately it takes time to go over each and every dev/customizing object and improve the error handling so that it meets your and our quality requirements. This is why we start with an closed Git approach.

In contrast, for abapGit we have already an "bring your own Git" approach, which comes with 2 limitations: (1) a smaller number of dev objects is supported (2) Import into prod instances is not supported. (I hope that from my previous explanation, you get the reason why).

Does this explanation help?

thank you for the quick and helpful reply!

I am looking forward to the roadmap in this case!

Yes, the explanation clarifies a lot of things for me.

I removed the "Outlook" disclaimer from the section "Git Repository Branches and Maintenance (“Hot Fix”) Development". Branches are now available.

do you already have some Guide or Help

that describes how to create a new branch?

We can see the buttons etc. but everything is greyed out.

A "how-to" guide that provides a best practice is planned.

there is currently no branch visible that we could use as master although transports have been released recently. Maybe a bug ? should we create an OSS Message ?

For each SW component, there must be an entry "master" in section "Branching" on the details screen of the SW component. If this is not the case, you should open an incident.

I have a question, it is possible to have a similar architecture for on-premise sap landscape?

for onPremise Landscapes, we also offer pipeline steps in Project ' Piper' that you can use to set-up a pipeline.
There are five steps available - all staring with 'gcts'. Two are made more for the Set-up parts: gctsCreateRepository and gctsCloneRepository and . Three are made for the day-to-day work: gctsDeploy, gctsExecuteABAPUnitTests and gctsRollback.

You can make use of them to set up your pipelines. Please be aware that the gCTSRollback is made for going back to a previous commit only in a short test cycle or something alike. It will deploy the version of the objects that is available in that previous commit without any respect to data that might have been created using the newer version. E.g. if database table had been extended and is becoming smaller again after the rollback, the data that requires the extended version is lost.

Why would you need ABAPGit to get objects into your development system? If you already have your onPremise landscape in place and develop on the Dev system, then you don't need ABAPGit to migrate any content into that system.

ABAPGit is not directly connected to gCTS. You could use it to get development objects into your ABAP system - no restrictions on that. But you would need to set up gCTS and export the objects in Dev using a transport request that is designed to create a commit. Configuring gCTS is described on the SAP Help Portal.

Please also note that gCTS is available starting with SAP S/4HANA 1909 and if you would like to use it for customizing data, then SAP S/4HANA 2020 is required

Hope this helps a bit - let me know if not

Thank you very much for your detail explanation.

with respect to AbapGit, I am using it for triggering CI pipeline to do code checks and unit tests on DEV system before any code transport.

For CD purpose I was considering gCTS with SAP S/4 HANA 1909 system and Plan to use the its rest API and design a small CD pipeline but Piped piper is something which is already doing the same.

Yes in principle gCTS is released for on-premise also. Please refer to the links under "gCTS", "General". But I am not an expert in gCTS for on-premise. I will forward your question to my colleagues that work in this area.

Actually I asked this question in this thread

So there are two gCTS one for one premise and the other for ABAP environment  right ? .

I was having some confusion around it

Bring your own Git is also planned for SAP BTP ABAP, but not yet available.