How did you connect to XSA applications before?

Previously, you needed to code and implement a custom adapter or SDK application to output data to XSA applications. With the new improvements to the HTTP Client Output adapter and the introduction of two new adapters, you now have another, easier way to integrate your XSA applications into your streaming projects.

What are the new features and improvements?

In the HTTP Client Output adapter and the two new adapters, you can use a new parameter called contentType to send OData requests in the following content types:

How do I use the new improvements and adapters?

Suppose you want to connect to an XSA application. In the application, a HANA table is defined in an hdb module. The code that defines this is below:

To output data to the XSA application, we use a streaming project that receives data and outputs it to the HANA server through a HTTP Client JSON Output adapter. An input stream, MyInStream, receives data in two columns also named Col1 and Col2. Just like in the HANA table, the first receives string values, while the second receives integer values. The stream is attached to an HTTP Client JSON Output adapter, which sends the values from both columns to the HANA table.

The CCL for the project is below:

To test the project, we can manually input three rows of data for Col1 and Col2 in the Streaming Run-Test perspective (in HANA studio). The input window looks like this: 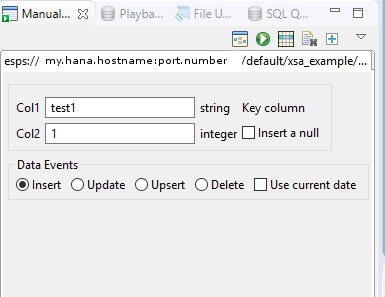 After manually inputting the rows, the stream view should look something like this: 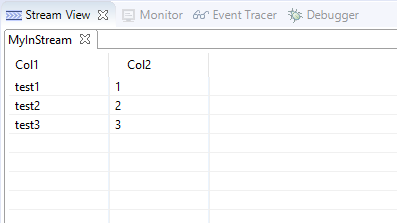 Finally, we can check the HANA table in the database and see that the three rows of data we gave to the input stream have been successfully received through the HTTP JSON Client Output adapter:

Also make sure to check out our What’s New video below!

For full details of all the new features and improvements we’ve added, take a look at What’s New in SAP HANA Smart Data Streaming, on the SAP Help Portal.

Your blog is very informative and explains clearly on how to connect to XSA using these new adapters.

I tried to create a similar SDS project using HTTP CLIENT JSON OUTPUT ADAPTER, But i am not able to post the reocrds to XS Odata.

Upon checking the logs i found below errors related to SSL and custom header protection. Please let me know where i am going wrong.

CCL for the project is as below

I've passed your question on to a couple of experts - hopefully they can help you out.

1) Did you specify the <host> and <port> values in your application?

2) Are you able to access that URL from a web browser?

3) Are you able to get the sample application in this blog post working?

4) One difference I notice between your URL and the URL in the sample in the above blog post is that the same specifies a URL that includes ".../basic.xsodata/..." whereas your URL specifies ".../xsodata.xsodata/..." At this point I'm entirely sure that this is relevant, but I believe it might be.