New toy: Infotypes 0008, 0014, or 0015: Including information pushbutton for the wage type documentation

The information that will be displayed by the pushbutton is linked to the wagetype information recorded under T512W. Yes, yes, that pushbutton squeezed between wagetype and description under V_512W_D maintance screen that most of us never bothered to edit 😉

Being honest, I think this is a great tool for big organization with many user and many new users where the consulting team has time enough to fill out documentation section under 512W_D, and I must say that I have not been the most careful with regards to filling this section each time I have created a wagetype .

So of course an absolute prerequisite here is to fully inform that “i” icon available under V_512W_D view in SM30.

Later corrections were released via the following notes:

According to above objects list, it seems this functionality does not reach yet HR-Renwal visualization. Anyway after SNOTEing everything, I had to manually change default setting in V_T588M for MP000800 screen 0300 from output only to optional because under standard setting output only the “information button would come out as inactive therefore not enabling access to the wagetyepe information.

I aslo had to repeat the same task for MP001400 and MP001500 respective screens changing standard behavior option to optional fill flag.

Under basic pay (0008) infotype, that wagetype table-control gets a new column with an “I”nformation icon enabling access to documentation. 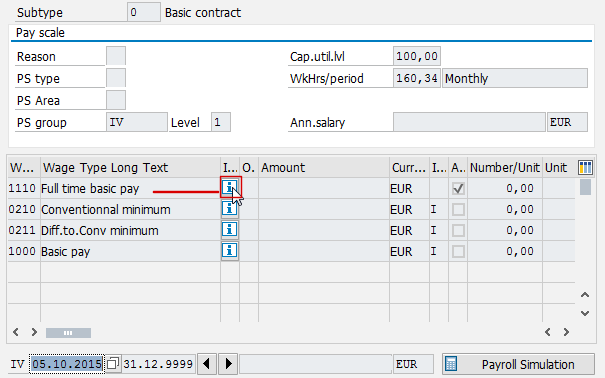 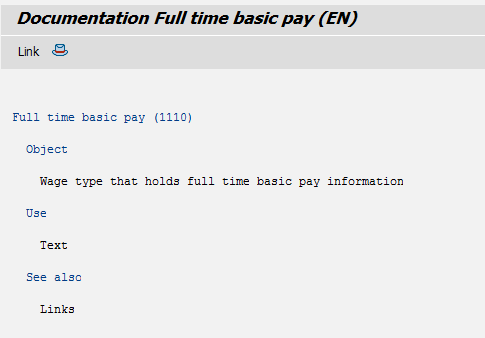 Under recurring payment, the new icon display in the following way:

Not really a tremendous new functionality nor will it ease in a staggering way our day to day but I think the whole point behind this is SAP is listening to customer ideas and actually put into motion few enhancement benefiting to the overall experience one SAP end-user has.

I have written an OSS message because it seems T588M dynpro control for screen 0300 of basic pay infotype (0008) does not consider the subtype value and will further update this post according the how this issue will be resolver.

After some long talks with fellow OSS people note 2242106 – Infotype 0008: Information pushbutton for wage type documentation is not displayed (Feature P0008 contains SUBTY) to address this issue which caused not to be able to display the pushbutton according to subtype.

Very nice! I must say that I am guilty of neglecting the documentation when creating wage types myself, but with this functionality I think many people would be more inclined to filling it out. Thanks for sharing!

Great reflexion! On this one, I think even SAP own product manager and in-house consultants will emphasize on wagetype documentation 😉

Nice job as I had missed this and I can see this (albeit small) being useful for some organizations.

Nice new "toy"....though I did cringe a bit that yet ANOTHER column has been added to the IT0008 wage type table. hahaha

Thanks for blogging this!

Thank you Christopher Solomon .... notice this one is idea D8794.....should leave me plenty of opportunities of new toy blogging 😉