Conflict has plagued the nation of Syria throughout most of its existance, going back to its independence from France in 1946. In the past two years, the strife has been particularly intense. With reports of chemical attacks in Damascus on Wednesday, August 21, the World’s attention has been directed to Syria. President Bashar al-Assad has been in the spotlight as the man responsible for fueling civil war and for being behind the chemical attacks. Military action by the United States has been the topic of the past few weeks. So what are people saying about Syria online? The social web is the first place many people go to express their opinions of what is going on in their lives and what is going on around the World. While many people post to Facebook or Tweet, there is a wealth of social sentiment in blogs, forums, and buried within the comments of news articles. SAP Social Media Analytics by NetBase allows you to dive deep into social sentiment to better understand emotions, attributes, demographics and much more around any topic you can think of. This could be a marketing campaign or brand, but in this case, you will see the sentiment around Syria. These opinions are those found using the SAP Social Media Analytics by NetBase and are not the opinion of SAP or myself. Click the graphics to enlarge view.

Tensions are high and people are expressing this online. Looking at the sentiment from the past month, you will see where people stand on Syria and the potential for US military involvement. There has been a huge surge in sentiment starting when the chemical attacks were first being reported on August 21st. The number of posts and mentions are in the millions and impressions are over 5 billion (estimated number of people that have seen the posts). Twitter and Facebook are the largest sources represented but blogs, forums and news are close behind.

Concerns around war and chemical weapons are among the most common terms in the past month. People are also keeping a watchful eye on Obama and how he is handling the situation. There are also dynamics that add concern around how decisions affect Israel and Russia. Negative attributes dominate the online conversation. People are responding to both the chemical attacks and the potential of US attacks and intervention in Syria.

Top likes and dislikes share many terms, demonstrating conflicting opinions. Syria has been dominating the headlines over the past month and this has been reflected in the sentiment as well as looking at the top authors by followers. With the exception of Yoko Ono, the top ten authors are news sources.

It is no surprise that 71.% of the sentiment is negative. However, males dominating the conversation with 70.9% of the sentiment and females with 29% is somewhat surprising. It is interesting how the sentiment is spread throughout the globe. This particular analysis is in the English language and this explains higher concentration in the US and UK. SAP Social Media Analytics by NetBase understands 45 languages. 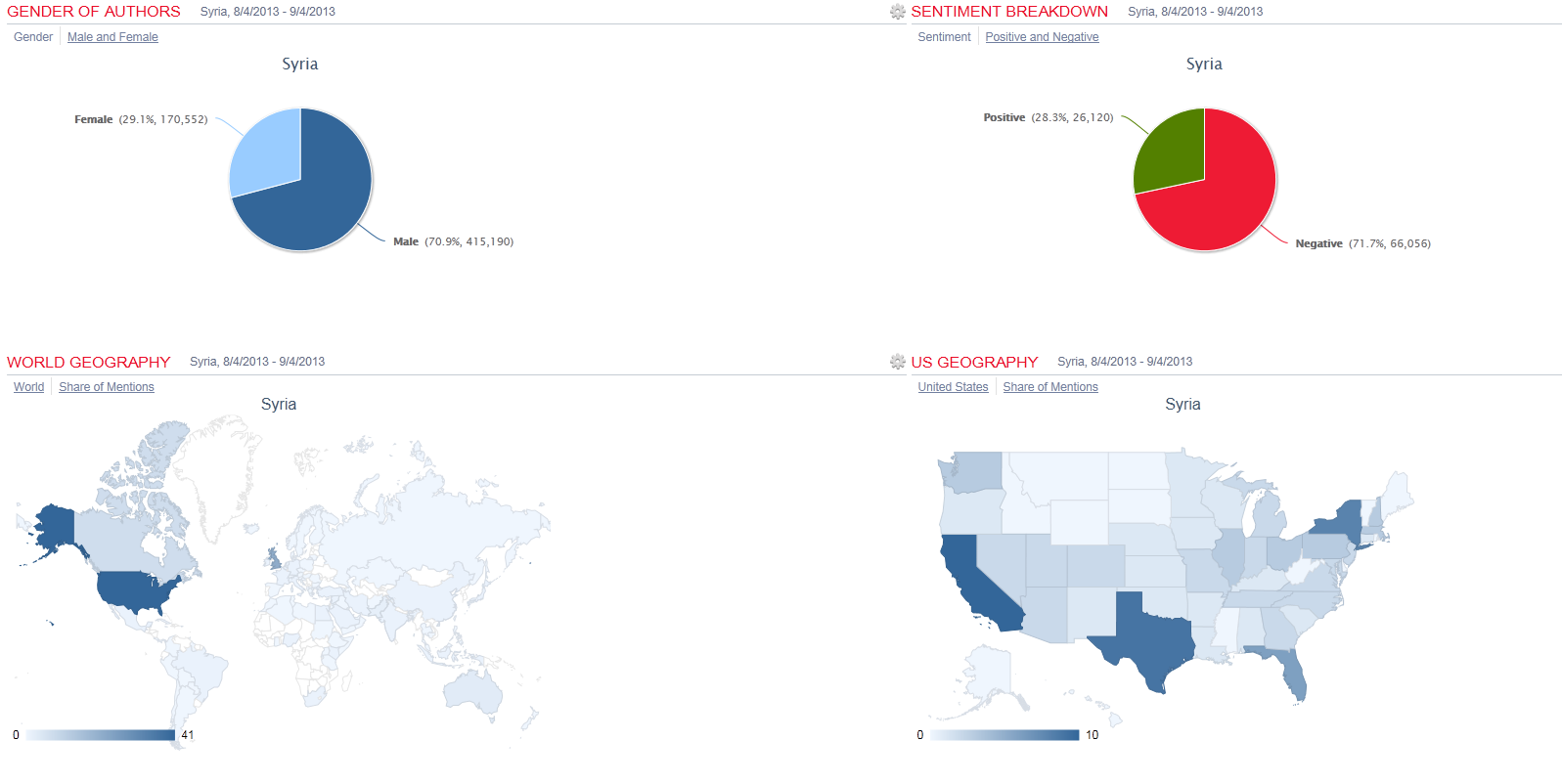 The situation in Syria is very complicated and people naturally have different opinions on what actions, if any, should be taken. This analysis is simply a reflection of the social sentiment and highlights where people’s thoughts are on the topic. With Syria on most people’s minds, it is worth doing some analysis on the topic. As mentioned before, SAP Social Media Analytics by NetBase can explore any topic online. Each of these graphics can be drilled-into and the stream of sentiment and individual sources are only a click away.

Hi Jake, another excellent analysis of social sentiments for a hot topic. I hear about Syria in the news a lot these days. If find it interesting how similar the proportions are in your chart showing a breakdown of authors by Gender, compared to the break down by positive/negative sentiments. 😕 I wonder if there is any correlation between male and negative sentiments (or female and positive sentiments) when it comes to "Syria?"

What I think is really interesting for companies is time-series data. For instance, how has sentiment changed over the last 3 months? Is it trending positive or negative? Are men more likely to feel negatively towards Syria?

Then let's correlate. Are those who trend negative more likely to feel positive towards military action? Can we tell this with NetBase?