As the temperature rises and summer goes into full swing we know this signals the start of a number of things- cookouts, pool and beach time, summer camps for the kids and of course football season. While that last one may seem like the odd man out here, true football fans know that it is never too early to be talking about next season. As a New England Patriots fan, one of the biggest stories of the off season was the replacement of our longtime wide receiver Wes Welker with a relatively newer player Danny Amendola. For those that aren’t familiar with the names or situation, basically it was a case of an older, aging player (Wes Welker) who wanted a lot of money and a team deciding they would rather spend less on a younger, but more unproven player (Danny Amendola).

The debate of which way the team should have gone was a rather polarizing one, leaving diehard fans on both sides of the fence. But while most people were talking about the stats and the player’s on field performance, they were neglecting maybe the most important piece: the money. To help settle this debate I decided to turn to the numbers and compare both the performance numbers as well as the less talked about salary figures, and what better way to do it than with the brand new SAP Lumira Suite!

The first step I took was collecting the data. While I already had the player performance data like yards and touchdowns, I needed to combine this with the player’s salary so that I could see the correlation. Once I collected the salary data (from spotrac.com) I used SAP Lumira Desktop to merge it with the player performance data that was already loaded. As you can see in the picture I get a 12% match with the player ID key which would be higher but I only pulled salary data for a select few players that I wanted to compare. Now that I merged my data together I was able to compare the player’s on the field numbers with how much they were being paid. In the first chart below I left the salary numbers out, using only the total touchdowns scored and how many yards each player gained as the two values (the two main factors players are measured on). I filtered on all of the Patriots running backs and receivers from last year as well as the new player, Danny Amendola, so that we could compare.  Because there are a good deal of injuries in football and players miss various amounts of games, I averaged the totals to see how many yards and touchdowns these players earned per game instead of comparing the season totals. 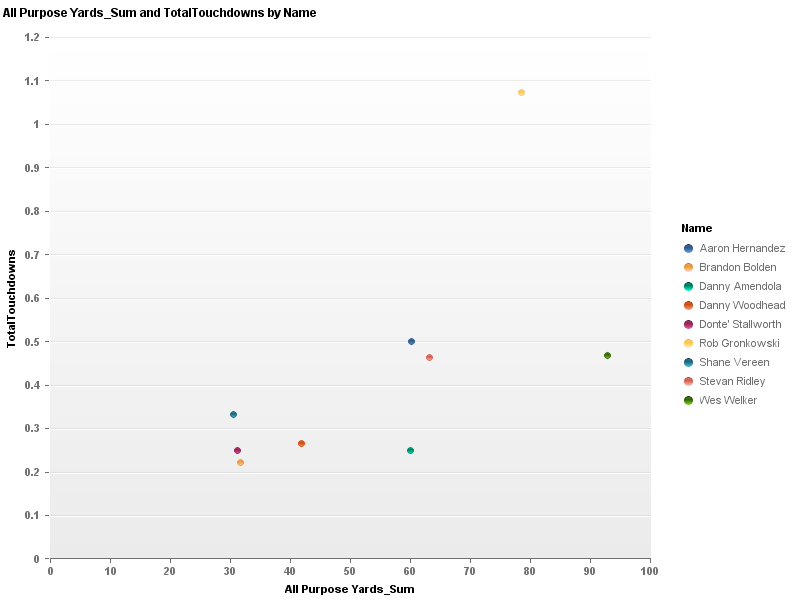 In the chart there are really two outliers: the yellow dot which represents the tight end Rob Gronkowski whose average of over one touchdown per game is pretty astounding. The other outlier is our topic of conversation Wes Welker who is fairly high on touchdowns but stands out even more for the yards gained per game at almost 100. Based on this chart we can see why people are upset that he’s leaving. Our new player Danny Amendola is represented by the light green dot that falls in the middle, not terrible but certainly not the caliber of the other two players mentioned.

Now let’s bring the salary numbers into the comparison. In the chart below we’ve added the players 2012 salaries, which are represented by the bubble size with the largest bubbles being the biggest salaries. 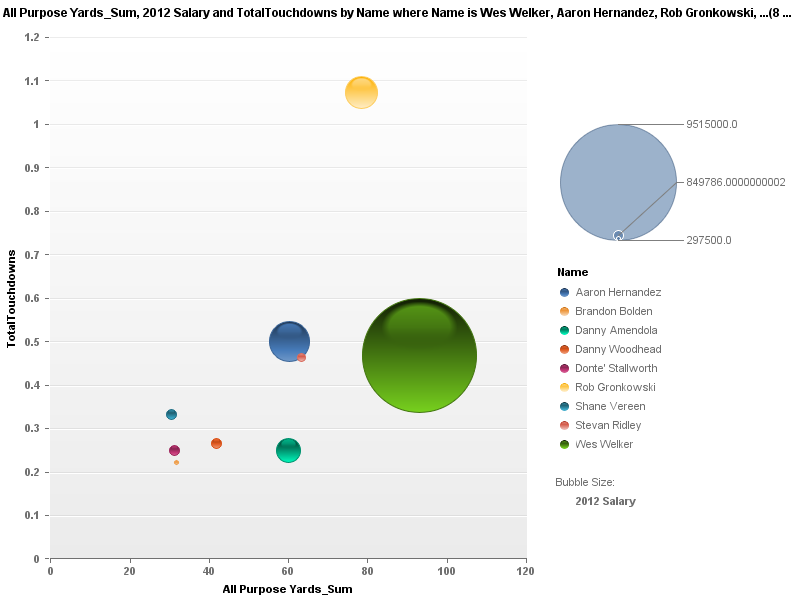 By adding the salaries in, it really changes the dynamic of how we look at each of these players. While in the previous chart we saw Wes Welker (represented as the dark green bubble above) as one of the best players in the grouping, it is obvious here that he is also by far the highest paid player in the group. In comparison, the next closest player Aaron Hernandez (dark blue bubble) has a salary three times less than Welker, even though his performance numbers are only incrementally smaller than Welker’s.  After looking at this chart, it starts to become clear that while Welker may have been the best player on the field, he certainly was not the best value of performance per dollar.

While this comparison alone was valuable, I wanted to compare multiple other measures at the same time as well as share my findings with the colleagues who I’ve so hotly debated the topic with, so the next step was publishing this to the Lumira Cloud. 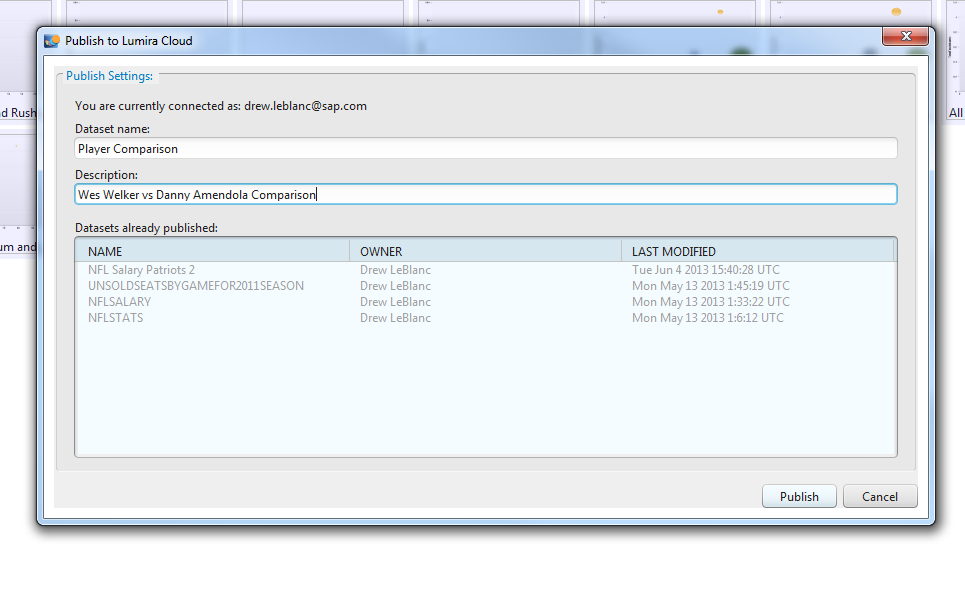 Once published into the cloud, I was now able to analyze the data even further, bringing in up to eight different measures and dimensions at the same time.

One of the other parts I wanted to analyze was that the Patriots only wanted young players and Welker was too old for them.  In the chart below I took all the players we saw before and grouped them by the year they entered the league. We then plotted it by their 2012 salary (y-axis) and 2013 salary (x-axis) along with the performance data points represented by color and size.  When we analyze this it becomes clear that the Patriots are in fact investing the majority of their money in young talent and getting a great return on it. You can see Welker represented by 2004 at the top right of the chart, but the bulk of the Patriot’s money is actually going to players 6+years younger with 2010 being further right along the salary axis. The size and dark color of 2010 and 2011 also denotes the fact that this is where the bulk of the Patriot’s stats are coming from as well.

Finally, I wanted to specifically compare Danny Amendola with Wes Welker in a week by week comparison from last year. Using the animation feature in Lumira Cloud I was able to roll through each week quickly comparing how both players performed throughout the season. While it doesn’t show up as great on paper, you can see in the example below how I can click play and stream through each week with the added animation feature and see that Amendola actually had several weeks where he out performed Welker.

In the end, the final judgment of what player the Patriots should have signed will be made on the field in this upcoming season. But through analytics we
were able to compare not only the often talked about on the field stats but the less talked about factors like salary and age which contributes just as much if not more than the on the field stats to the decision making process. After all, this is a business and just like any other business what it ultimately comes
down to is a return on investment, and what this showed us was that maybe it’s not as simple as just taking the best player on the field.

Jason - I think you have it wrong

Thanks for the response Jason and Tammy! As long as you keep it in the NFC I can get on board with both teams!  🙂

Drew, Great Job.  This is like a football version of the movie Moneyball.  Have you ever seen it?

Question for you Drew.  When looking at Welkers bang for the buck were you using his 2012 salary to compare with Amendolas? That would help in understanding your numbers.  I do like how you put your "unbiased" Patriots spin on thing when you state "Amendola actually had several weeks where he out performed Welker" but isn't it safe to say that Welker outperformed Amendola most of the time?  Whatever makes you as a Pats fan feel good that you lost such a valuable asset then good for you!

As my my stats professor stated to me in my college days "there are lies, damn lies and then there are statistics"! and, as Russell Wilson states "Go Hawks!"

Paul, you of all people should know the number one rule of story telling is to never let the facts get in the way of a good story.

With that said, you would be correct, I was comparing the 2012 numbers in those graphs. That same chart with the 2013 salaries somehow ended up on the cutting room floor (pure coincidence) but admittedly it was a bit closer, although Welker is still about double with a $6 million salary compared to Amendola's $3.5 million. I had a few other charts I also cut out though including a comparison of all WR's with a bottom 15 QB that Amendola showed favorably in.

My next project will be to figure out the ratio of what the Seahwaks paid Matt Flynn per regular season snap taken.... something tells me I won't need Lumira for that one 😉

Nice one Drew! I don't follow American football (hockey for me 🙂 ), though I can appreciate the analytics and insight you were able to get from Lumira! Cool!

Fantastic for a Data Geek Challenge entry! Details on how to enter: www.sap.com/datageek

Where did you pull this data from? Is there a website which has this info publicly available?

The salary data i pulled from spotrac.com which is a public site that provides a lot of player salary data for all different leagues. The actual in game data we have from a project we did with the NFL.

Thanks, Drew. Spotrac looks like a great resource. I'm sure I'll be referencing it for future posts.

nice example. Thank your for giving statistics such a nice and comprehensive Picture. 🙂

Interesting article. Honestly, I have never aspired to be a GM, because having to make decisions like these would wreck me. The movie, "Moneyball" put 'gut instinct' up against Stats for making personnel decisions. I still lean toward 'gut instinct'. I suppose that is because I am too much of a fan. When I see the cold hard stats it paints a different picture: analytics vs. emotions.

Hail to the Redskins!