With the US 2012 election campaign finally, thankfully, winding down, I wanted to share some interesting stories about the technology being used by the campaigns and super PACs to more effectively direct their field staff and target voters.  From the various news stories I’ve heard over the past few weeks on NPR, and read in articles, it seems that both the presidential campaigns and the big budget super PACs have been making heavy use of social media, mobile device applications, cloud platforms, and big data.

Here are five descriptions of applications that I was able to find. I will add to this list as I run across more.  Please feel free to add any links to interesting stories that you know about as well in the comments. Also, the application of this technology is strictly an American perspective. I suspect many of my European colleagues will have an entirely different view of the acceptability, and even legality, of some of these applications. Please share your perspectives on this issue as well.

Use of cloud computing to link sprawling, temporary field offices with a single system.

This article points out that both campaigns are making use of cloud computing to link together their many field offices to state and national offices. Another excellent point is that the campaigns are temporary, so purchasing extensive IT infrastructure makes no sense when these campaigns can just rent system capacity as needed.

Finally, one point I didn’t see in the article is that in the case of Romney, he had only a matter of weeks to set up field offices after wrapping up the Republican nomination whereas the Obama campaign had the luxury of planning his next election over four years. There is no way that Romney could roll out an effective organization without making liberal use of cloud computing to speed up the process.

The article specifically points out an application called Campaign Cloud by electionmall in association with Microsoft. In this application, campaigns can manage their staffs and fundraising activities. 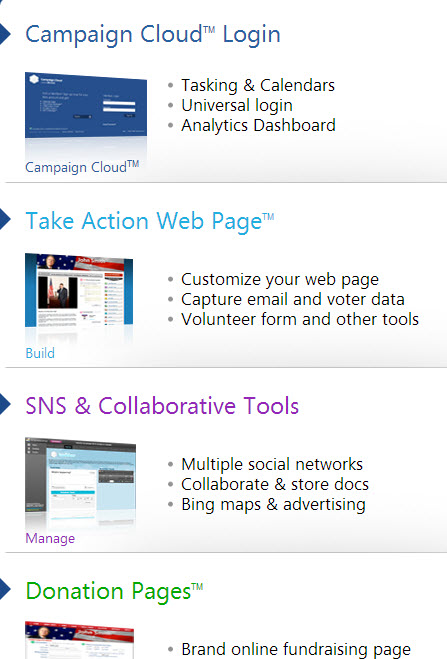 Features of the Campaign Cloud by electionmall [SOURCE]

This article by Kai Ryssdal from NPR’s Marketplace describes the job of a campaign tracker – people working for super PACs and opponents’ campaigns that follow a candidate to every event, document everything a candidate says, and try to capture video and audio of inconsistencies and gaffes. This information is then uploaded into a searchable database in the cloud along with a whole ton of other public information.  Back at the Super PAC, the staff spend hundreds of hours searching facts and video putting together a political history, trying to find contradictions or other bits that eventually end up in political advertising.

Big data profiles of voters for better targeting and motivation

Then there is this article that describes how there are at least seven companies that are combining multiple public and private data sources to create voter profiles including age, gender, voter registration, how often you actually voted, and your political donation history. This information currently profiles 180 million voters in the United States – 80% of registered voters. The key is applying the right psychological and social behavioral science criteria to this data. This article from The Slate, heavily slanted towards Obama, describes the difference between merely constructing a model of how you think voters look like, as opposed to considering actual behaviors.

Some of this information comes from search engines. Google apparently does not share political beliefs as it considers this to be sensitive personal information. However, this article does claim that Yahoo and Microsoft sell access to registration information for political targeting.

This data isn’t just for targeting ads. This transcript from an NPR  news article describes how this data is allowing campaign workers to target individual voters instead of merely grossly targeting precincts.  What’s even more interesting is how they’re motivating people to go vote. They send out postcards showing your previous voting history and those of your neighbors. No, this isn’t how you voted, just whether you actually cast a ballot or not. This results in a sort of self-inflicted peer pressure. Many people don’t want their neighbors to see that they are disaffected and not taking part in their patriotic duty to vote. If this seems invasive, records of who voted in an election have been displayed for years, and it was common practice for precinct watchers to pay attention as to whether their party members had come out to cast their ballot. 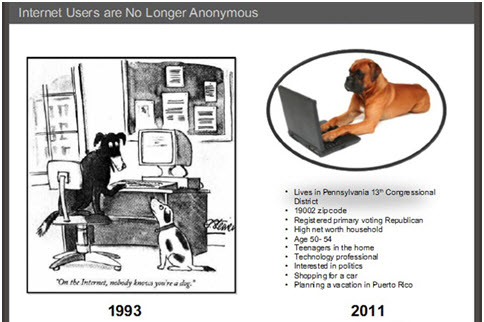 A slide taken from an online slideshow by a political targetingfirm. [SOURCE]

Certainly both campaigns and super PACs are making massive use of social media to get their message out, and to solicit donations. But what about using social media to both motivate people to actually cast their vote, and maybe even to influence how they vote. This article describes a research study that shows exactly how a social media site like Facebook can be used exactly to that effect. I don’t know whether this was actually deployed by any campaign, but don’t be surprised to see it in the next election cycle.

Startup company Votizen has taken these concepts to create as service that matches online social media profiles with registered voters.  You can sign in with your Twitter or Facebook account and see your friends party registration, where they are registered to vote, and how often they actually cast their ballot. You can then enter your favorite candidate, whether for President of the  United States, or the local school board, and find out which of your friends you need to motivate to vote for your candidate and cast their ballot. 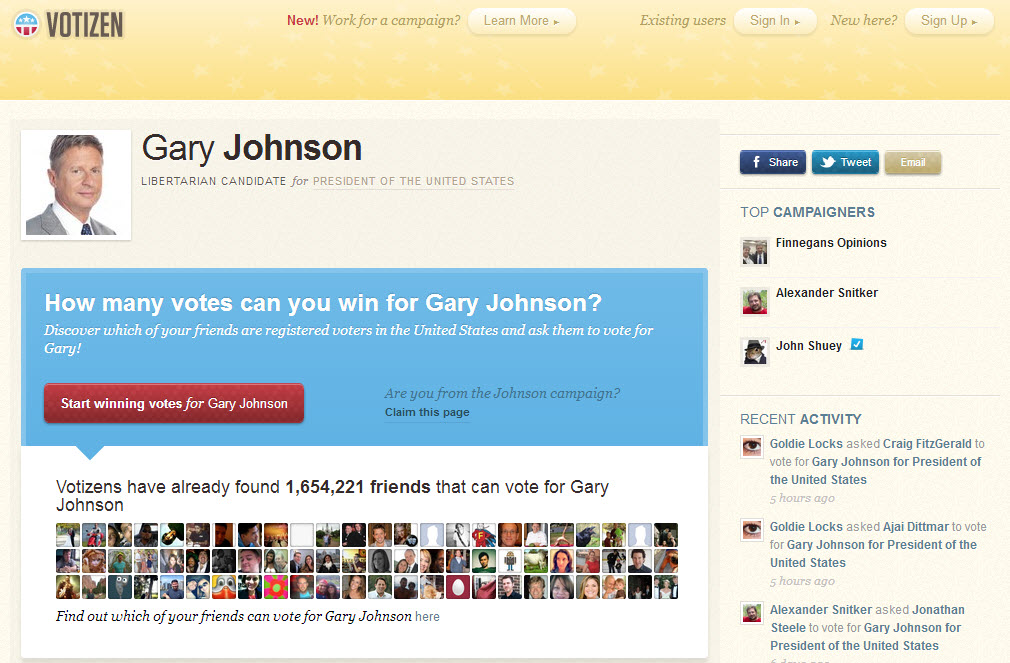 View candidate profile and friends you can influence to vote for a candidate through social media in Votizen. [SOURCE]

Based on the information they’ve gleaned from social media networks and registered voter lists, Votizen is able to project a real time voter sentiment page of tweets. 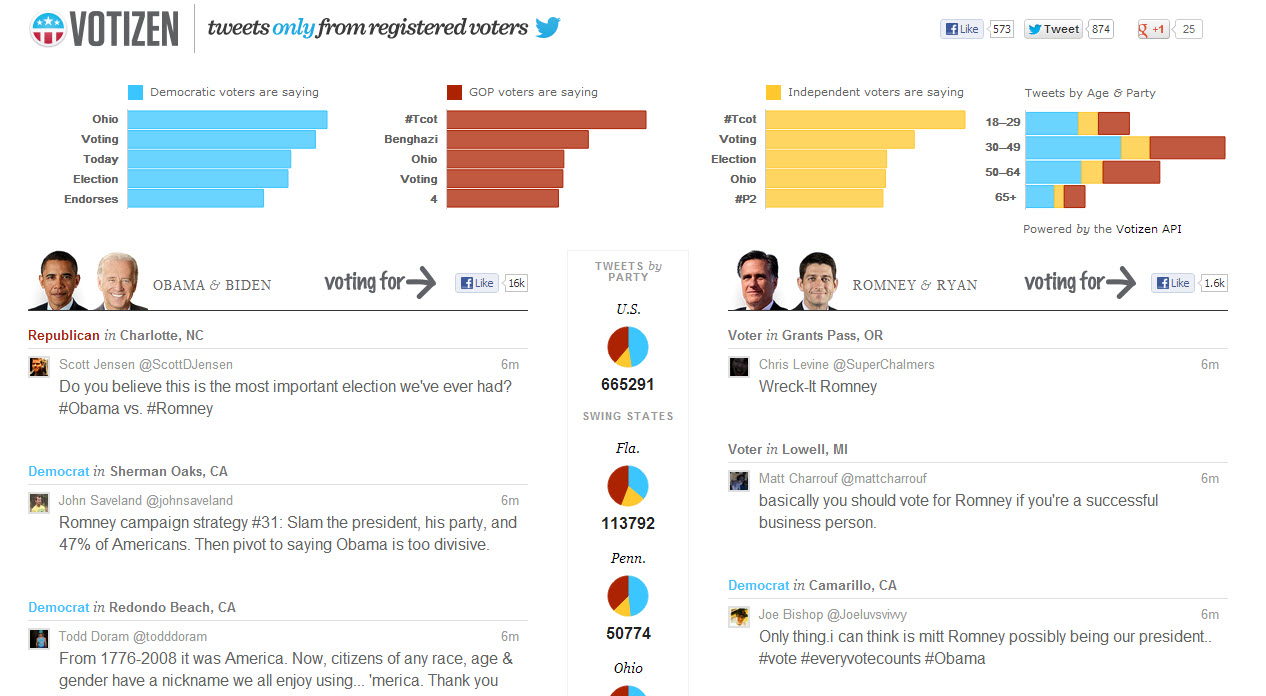 Tweets and real time statistics of registered voters sentiment in the US by Votizen. [SOURCE]

Lastly, this article and broadcast from Aarti Shahani from NPR’s All Things Considered describes the most impressive application I’ve heard about in this election cycle – The Door Knocking App, Electioneer from startup company Organizer. This application provides real time status updates to campaign coordinators of the voters being targeted by canvassers.  You can see the progress of their canvassers and also get real time information of the voter’s sentiment.

There’s a corresponding mobile device application that canvassers use to know which voters they are assigned to talk with, and to be able to update sentiment in real time via a multiple choice poll.

One quote from the NPR article suggests that this kind of real time sentiment gathering could even replace traditional polling since you’ll have actual data about how each voter is feeling rather than having to make statistical guesses.

I was able to find this demo of the application on YouTube from the Disrupt conference:

Innovating ideas for your company

None of the applications described above are for sale from SAP. If, however, one of these stories sparks a creative idea in your head, I encourage you to check out the SAP NetWeaver Cloud Developer Center. Here you can get a free developer license, and see what combining cloud computing with social, mobile, and big data functionality can do to create a competitive advantage for your company.

What are your thoughts? 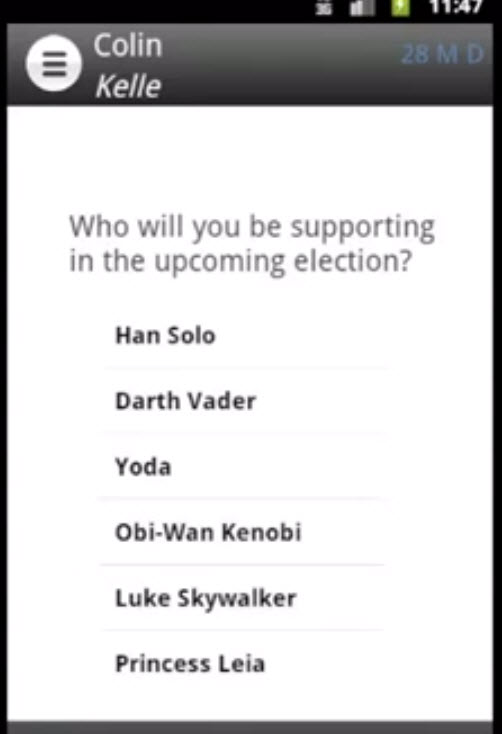 Thanks Greg. It is scary how much information there is about us on the web! Those Voter Profiles that pull together info from various locations can be very useful if analysed correctly. Thanks for putting this together, hopefully I'll see you in Madrid.

Thanks for your comments.  I was able to get some more details on the big data, social, and mobile applications used in the election cycle, so I did a big update to the blog.

Looking forward to seeing you in Madrid!