Ernie Els: A Great Victory and a Great Mission 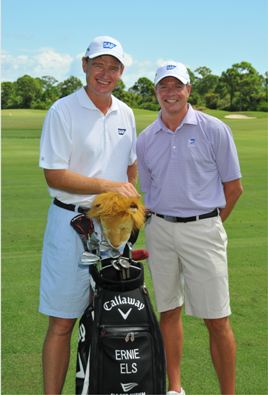 As an avid golfer and 8-year veteran of SAP, I could not have been more excited to wake up early last Sunday, coffee in hand, and tune into the telecast of the final round of the Open Championship (aka British Open).

The oldest golf championship in the world has always been a great viewing spectacle but the fact that my friend and SAP Ambassador Ernie Els was in the hunt made everything that much more thrilling.

I have been fortunate to spend time with Ernie on several occasions whether hosting customers or raising money for the Els for Autism (E4A) charity.

Ernie’s relationship with SAP started with a traditional corporate sponsorship.  However, in recent years and based on Ernie and his wife Liezl’s openness about their son’s struggles with autism, SAP has extended this partnership and is now a major supporter of the Els for Autism charity.  Ernie talks briefly about the relationship in this brief video.

I have always believed that SAP and Ernie Els were the perfect match.  What Ernie is to world golf, SAP is to businesses, employees and people – decades of dedication, relevance and humble success.

I couldn’t be happier for Ernie or more proud that SAP is affiliated with such a great Champion!  This is truly a Win-Win relationship.

Thanks for sharing this story.  It's a great example of how SAP is making a difference, beyond contributions related to software development. - Jeanne

I like the fact that this is a personal story, from your viewpoint, into something SAP related. Bonus: it comes with a photo of you and Ernie Els... Also: congratulations on your first blog in the SAP Community!

Thanks for posting this, Dave. We tend to think of sponsorships as just slapping a logo on something or someone, so it's great to learn more about Ernie's support of SAP and his personal passion around autism research. Since this is also a passion of mine it gives me a stronger connection to Ernie and by extension SAP. Thanks again for sharing.