We receive some really interesting articles for SDN and BPX.  After editing and publishing so many of these, I can see the challenge of trying to explain a complicated process or setup with mere words and screen shots.  I often wonder how many hours have been lost just trying to show an exception or a tricky work around that is just easier to narrate and demonstrate!

Well, that’s where eLearning comes in.  But how do you make it?  We’ll, it’s easier and freer than you think! I recently discovered a free utility called the Jing Project*.  It was created by the good people over at TechSmith (Snag-It, Camtasia).  Jing is a screen and voice capture application without any Ka-Ching (or “Ka-Jing”) – for now.  It’s really easy to use and it runs on both Windows and Mac.  The output file is a nifty little SWF file with a similar interface found on video sharing websites.

Before you get started, Jing has a couple of challenges that make using it a bit more interesting…

When you’re done, just ZIP the output SWF file and submit is to the SAP Community Network Content Submission System.  After your content is approved, we’ll upload it to the library and it will appear in the corresponding eLearning catalog.  You can also link your demos from an article or blog, just as I’ve done here: 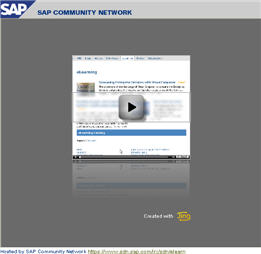 Screen Capture Made with Jing

* As in all my blogs, this one represents my own personal recommendation/opinion and not that of SAP.

Thanks for sharing this with the Community...Already downloading it -;)

Marilyn Pratt
June 26, 2008 at 8:19 am
This is one of the better tools I've seen as the clarity of the screen capture is excellent.
Thanks for sharing

Former Member
July 7, 2008 at 7:35 pm
During the migration process problems have been reported for this blog. The blog content may look corrupt due to not supported HTML code on this platform. Please adjust the blog content manually before moving it to an official community.

Thanks for the blog. Maybe you should take a look at http://www.debugmode.com
There you will find the program WINK. It doesn't have the limitation of 5 min. and you can adjust the recording region.

you may try camstudio

It is freeware and opensource and can record avi or Flash Videos of your Desktop.

Santosh V
July 10, 2008 at 9:26 pm
What is the advantage of using this tool? There are already lots of tools to do a screen capture. I use SnagIT and I find it very user friendly.

Jason Lax
Blog Post Author
July 12, 2008 at 9:51 pm
Snag-It is great but not free for everyone (it is for SAP employees via the software corner).  It's also made by TechSmith, creators of Jing and Camtasia.

Check with your IT dept. if it is available at your workplace.  Content recorded with Snag-It can be saved and submitted to SDN/BPX in AVI format.

Former Member
July 11, 2008 at 9:25 am
I agree that this is a very good tool and it shows alot of promise, but I can not recommend strongly enough that you read the FAQ page before downloading it - ESPECIALLY if you are using any of it for commercial use.  Read the excerpt below from their web page; if used incorrectly, you could be walking your self into a very uncomfortable licensing situation.

Yeah, didn’t think you’d let us slide with that last answer… so … here’s the deal; Jing isn’t a product right now—it’s a project. What we’re trying to do is give this to the world and figure out whether it fills a need or provides a useful service. We’re asking for both your participation and feedback on this concept, so the least we can do is provide the Jing Project complimentary during this period. As we learn what you want from this, we’ll have a better idea what the pricing and business model might look like in the future.

Jason Lax
Blog Post Author
July 12, 2008 at 9:46 pm
This is a very good and important point (and reason to always read the fine print).

Before writing this blog, I contacted the people at Jing Project to tell them I was going to suggest their tool and that I wanted to host content made with Jing on our site. They gave me an explicit approval to proceed.

How long this tool is free remains to be seen. Meanwhile, there are some other good free tools suggested below to consider.

Former Member
July 28, 2008 at 4:31 am
http://www.microsoft.com/windows/windowsmedia/forpros/encoder/default.mspx

Thanks for the insight.

Thanks also for all the coresponding feedbacks with the links to another usefull capturing program.

Former Member
August 5, 2008 at 8:04 am
Couldn't get the Jing tool to work after install. The WINK software is very useful though and very easy to use. I see many e-learning training lessons being on our company knowledge base shortly.