When you want to integrate SAP Sales Cloud or SAP Service Cloud (formerly known as SAP Cloud for Customer “C4C”, in the following referred to as “cloud”) with other systems like SAP S/4HANA or SAP ERP, etc. you have to take care about code list mapping.

There are already good blogs that describe code list mapping in general or the automatic code list mapping feature. In this blog I want to share my personal approach and point out some important facts, that I sometimes felt lost in the background noise. Small pitfalls that can drastically influence the result! In addition to that, I provide an Excel workbook (containing macros!) that can help you with the typical tasks.

My approach will lead to higher quality mapping entries (in comparison to the “automatic” approach with the code list mapping report), that makes maintenance and error resolving for failed messages easier later on.

To make sure everyone has the same view on the topic, let’s first clarify again what code list mapping actually is. The most important aspect to mention is, that when we talk about code list mapping, we should have the two different steps in mind: code list and mapping. Because this is exactly what I sometimes felt missing. It’s not only about mappings.

A code list is -from an end user perspective- a drop down somewhere on the UI where you can choose a value from a predefined list. This list can usually be translated in all relevant logon languages and can be context sensitive, i.e. the value you can choose actually depends on the value of another field. A good example for that is the RegionCode which depends on the selected CountryCode.

Code lists are maintained by key users (administrators) in finetuning (workcenter Business Configuration, view Overview or Implementation Projects -> Activity List) and consist of a technical code (language independent) and a description, that is usually language dependent. 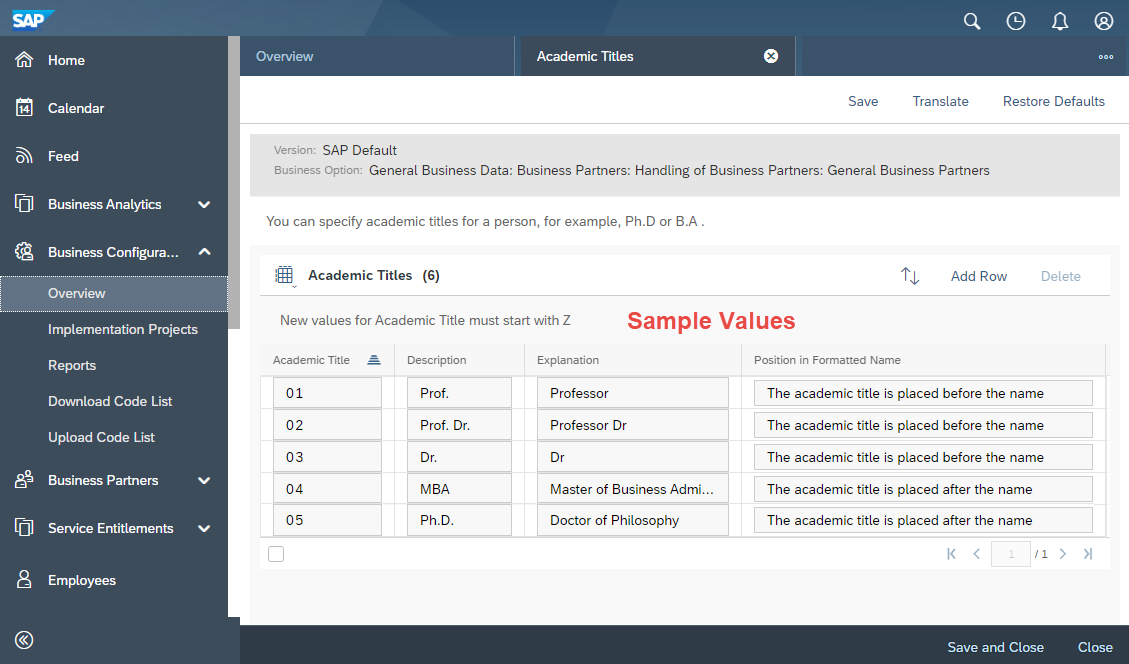 As long as you run a system standalone, you just need to brainstorm what values you need and you might find it handy that SAP Sales Cloud/SAP Service Cloud gets delivered with a nice set of default values for nearly everything and you could jump start right away.

This changes completely when you want to integrate SAP Sales Cloud/SAP Service Cloud with another system which is usually already in place. Then SAP Sales/Service Cloud needs to adapt to the existing system. Now you might say: “That’s the point where code list mapping comes into the game!” That’s not wrong, however, it’s only half the story… 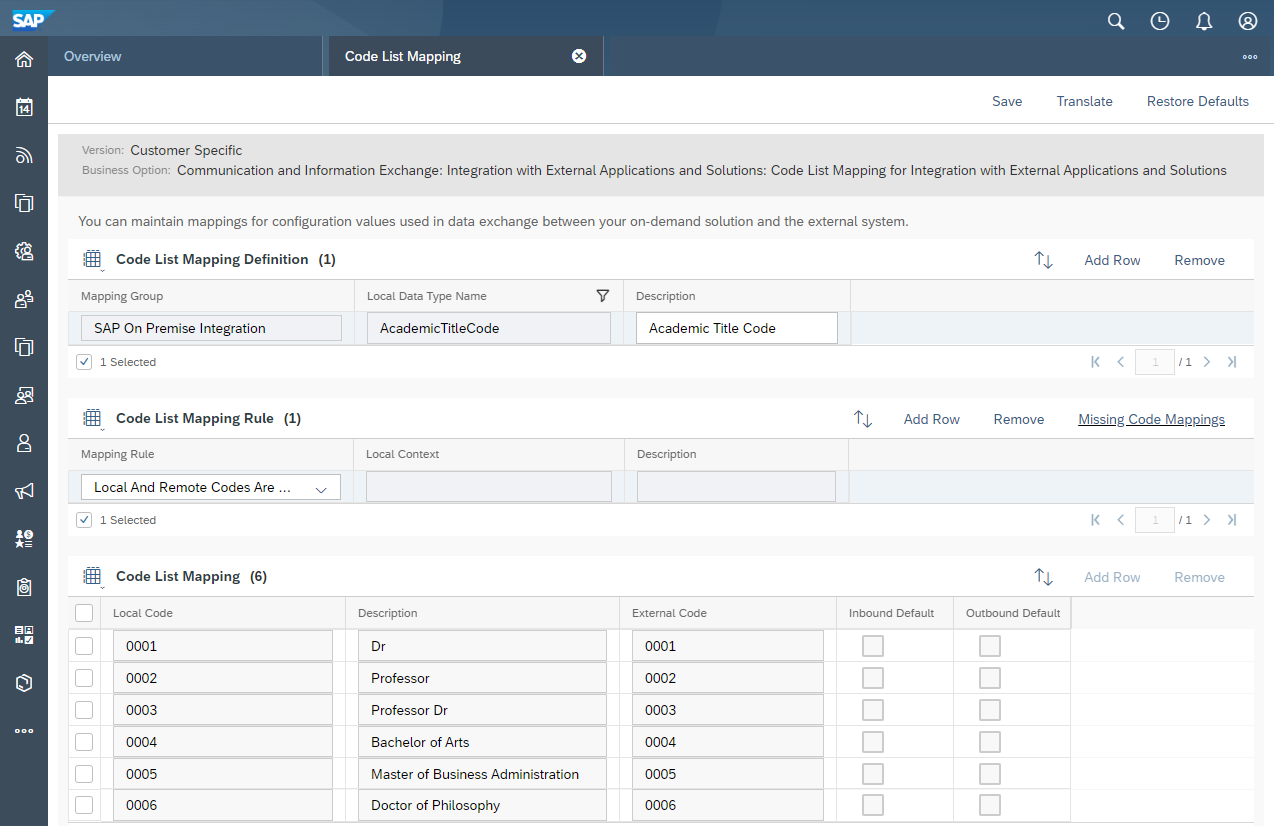 As mentioned earlier, it’s not just about the mapping. The most important question is:

What to do with codes, that are pre-delivered by SAP Sales/Service Cloud and have no equivalent in the external system?

The existing system will usually be the leading system. It has run for years and it’s configuration is usually fixed. SAP Sales/Service Cloud, as the new system, has to stick to it. That does not only mean, to map entries with the same meaning/description. That also means, that we need to get rid of default values, that are gratefully delivered, but in integration scenarios prevent us from creating parity with the existing system. This is the essential aspect, that I feel missing in most guides about code list mapping:

Remove default entries in SAP Sales/Service Cloud, that are not available in the leading system.

The green lines between them show the mappings that would be needed, the green arrow shows a value (B.A. – Bachelor of Arts), that only exists in S/4 and the short red lines show values (MBA – Master of Business Administration, do not mix with B.A.), that are pre-delivered by SAP Sales Cloud, but they are not available in S/4 and hence should be removed.

In order to solve this problem, let’s find out where the automatic and the manual approach lead us.

Let’s have a look at the produced result for our sample values of academic titles. Cloud on the left and on-prem on the right hand side.

Did you expect that?

Well, we can see three problems here. Four if we include the quality/complexity of the mapping.
What can we observe? Let’s start from good to bad:

Limitations of the Report

Let’s quickly recap the limitations of the automatic code list mapping feature (this spans across cloud upload and on-prem report). It’s not possible to:

The desired result covers, different aspects: First of all, cleaning up the pre-delivered codes on cloud side if they do not completely match the on-prem side. And furthermore, mapping entries with more intuitive code pairs.

All codes have the same relevant digit like in the on-prem solution. They only have a Z prefix, which is a technical prerequisite in SAP Sales/Service Cloud. (Prefix and max code length depends on the code list)

Procedure In General And In Short

As a preparation: Create a list of all relevant code lists for your scenarios and execute the following steps per code list or per subset of code lists. (The less code lists you “process” at once, the easier  you can keep the overview and do not run into danger of leaving a step out.)

In this chapter I’ll explain the procedure in more detail using the help of the Code List Mapping Helper.

First of all, say “Bye, bye!” to the idea, that everything is done with a single click. But don’t worry! After getting familiar with the procedure, it won’t take too much time. Furthermore, this approach will help you getting to know the involved systems better. 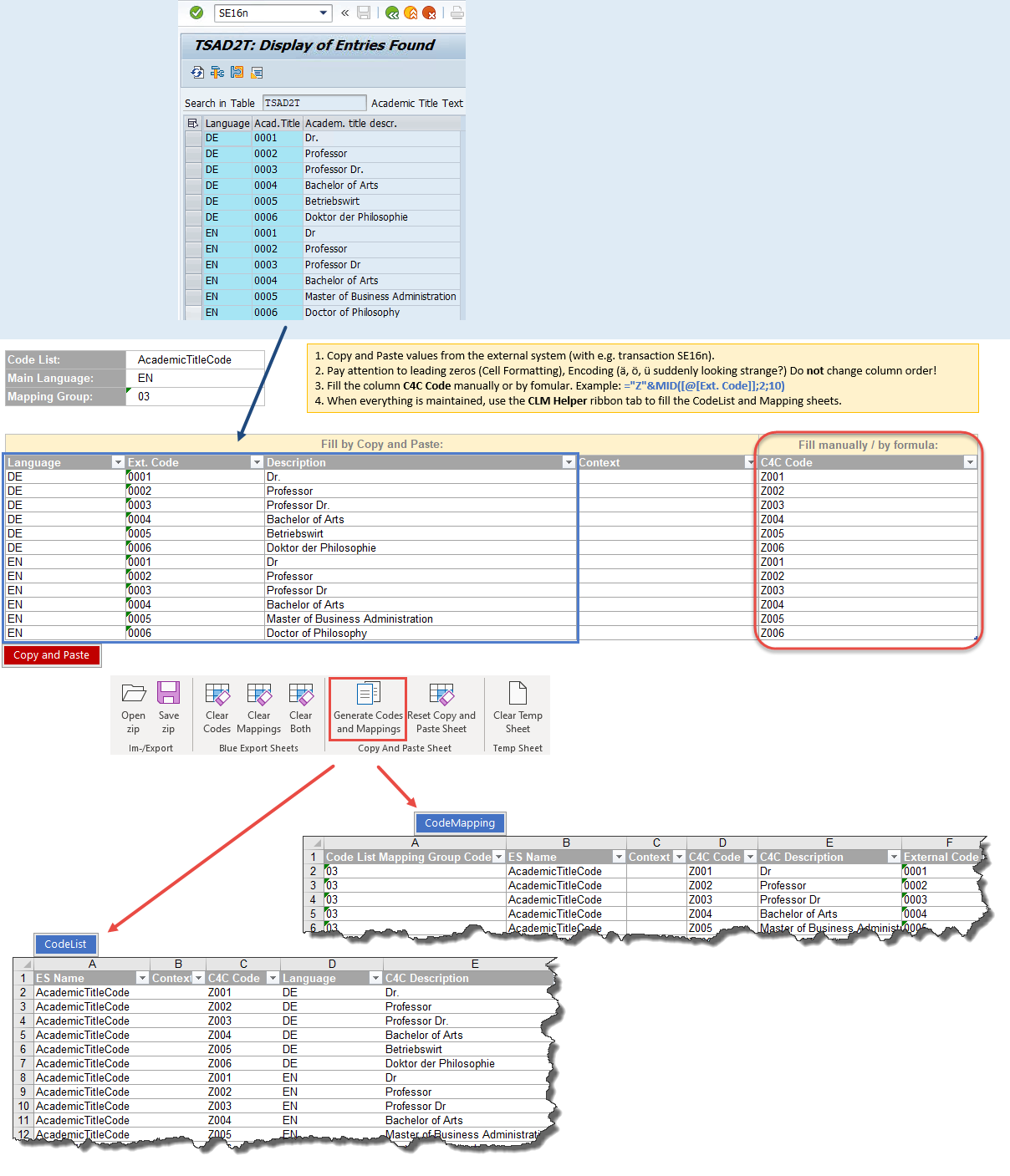 Procedure in Pictures: From Copy and Paste to Codelist and Mapping

Preparation: Download the Code List Mapping Helper Excel (containing macros, further details below) or prepare an excel file with the right structure for code lists and mappings on your own.
(If you use your own file, you have to download the file with the overview on code lists per scenario in addition.)
Having a list of relevant code lists where the according fine tuning activities, on-premise tables and IMG paths are listed is vital for the following steps.

Identify the relevant code lists for your integration scenarios and repeat the following procedure per code list (or for a small subset of code lists in each run). Processing multiple code lists at a time increases the possibility of losing overview, forgetting steps and it makes troubleshooting harder. So the clear recommendation is, that you go code list by code list.

Repeat those steps for each code list until you have maintained all relevant code lists. After running through the procedure once or twice, you will get familiar with the steps and will speed up. Finally this approach helps you getting to know the systems and the background of all the settings.

The Code List Mapping Helper Excel is an Excel workbook (with macros) that contains prepared worksheets for working with code lists and mappings and provides some automation for the most common todos in form of a new ribbon tab (“CLM Helper” – Code List Mapping Helper) to help you with steps like importing and exporting the zipped csv files in the proper format and generating the mappings.

Further details can be found on the Intro worksheet.

To conclude this topic, we can say that manual code list mapping has the following advantages:

Even when using the automatic code list mapping feature, you would still have to double-check and visit each codelist/finetuning activity. Why not taking a little more effort to reach a much better quality and control them? And with the help of such tools like the Code List Mapping Helper, the manual process can be run through much faster, so that it doesn’t take too much time.

Hope this article was helpful! Feedback is always welcome! 🙂