Do you need to report based on fiscal periods, and require KPI’s such as a rolling fiscal year, or fiscal Year to Date? Does your fiscal year deviate from a calendar year? If you are using SAP Data Warehouse Cloud with SAP Analytics Cloud or a 3rd party reporting tool, then this blog series will help you realise those requirements. Today, there is no out of the box feature to provide this, but this blog series provides you with generators for fiscal calendars, and several SQL templates to build your fiscal period based KPI’s. 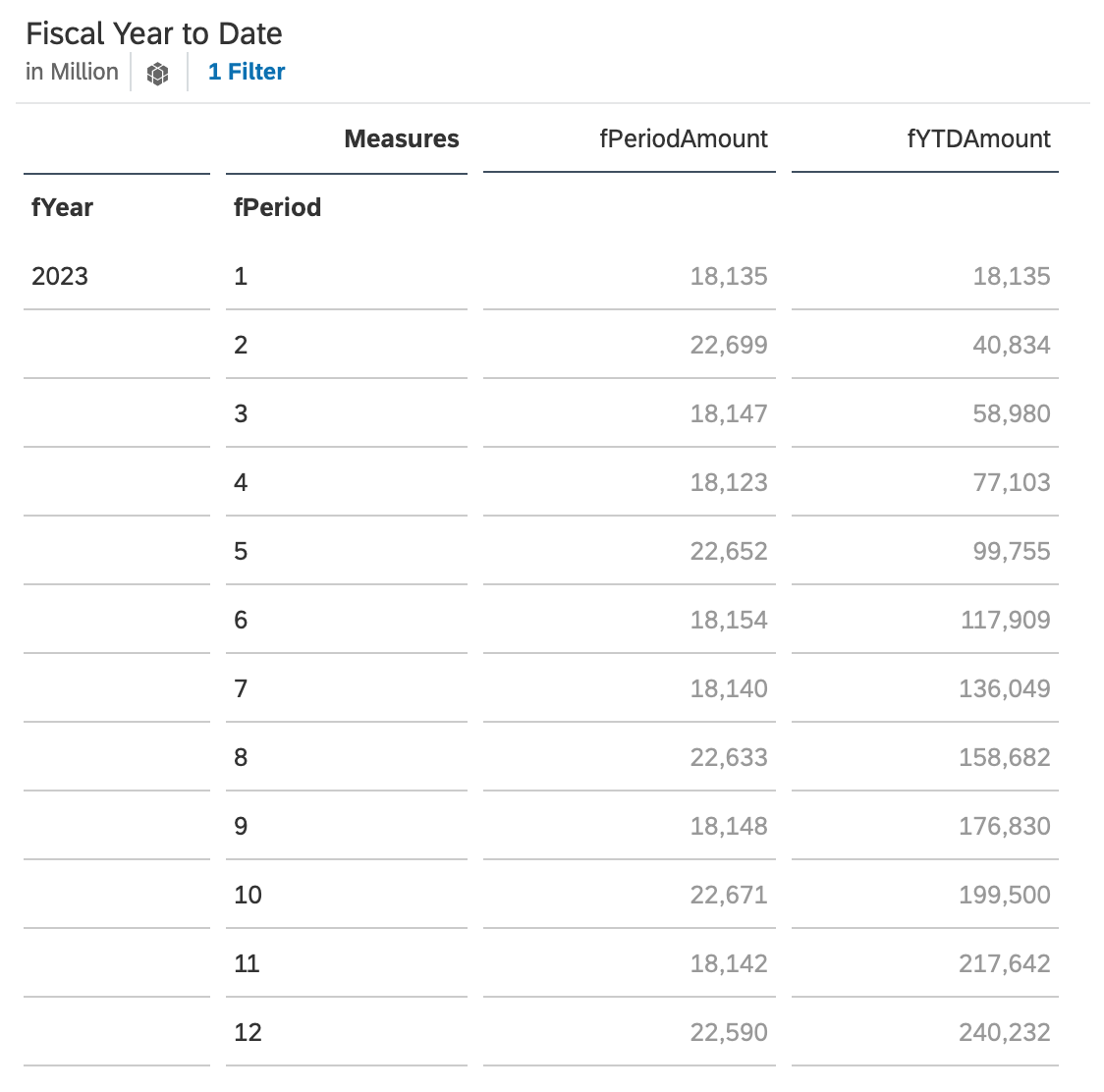 Figure 1: Fiscal Year to Date calculation based on this blog series

To report with KPI’s based on fiscal year, fiscal periods, or even fiscal weeks, you basically need two things:

To fulfil the requirements of KPIs such as rolling fiscal year or fiscal YTD, we first need a fiscal calendar in SAP Data Warehouse Cloud. That is what is handled in this blog post. The logic to calculate KPIs in handled in subsequent blog posts.

This blog post and the subsequent post will each outline a method to generate a fiscal calendar:

Just so that you know how this looks like, let’s look up a fiscal period configuration in an actual SAP ABAP-based source system. Below is an example of a fiscal period configuration in an SAP ABAP-based source system, which can be found under transaction OB29. It’s likely that in your case, the settings here have already been made and there’s no reason to make any changes. For this blog, I’d just like to show this screenshot so that you know what input I’m using for the result you will see later on. As you can see, we have a fiscal year that works with full calendar months, but which starts in April. 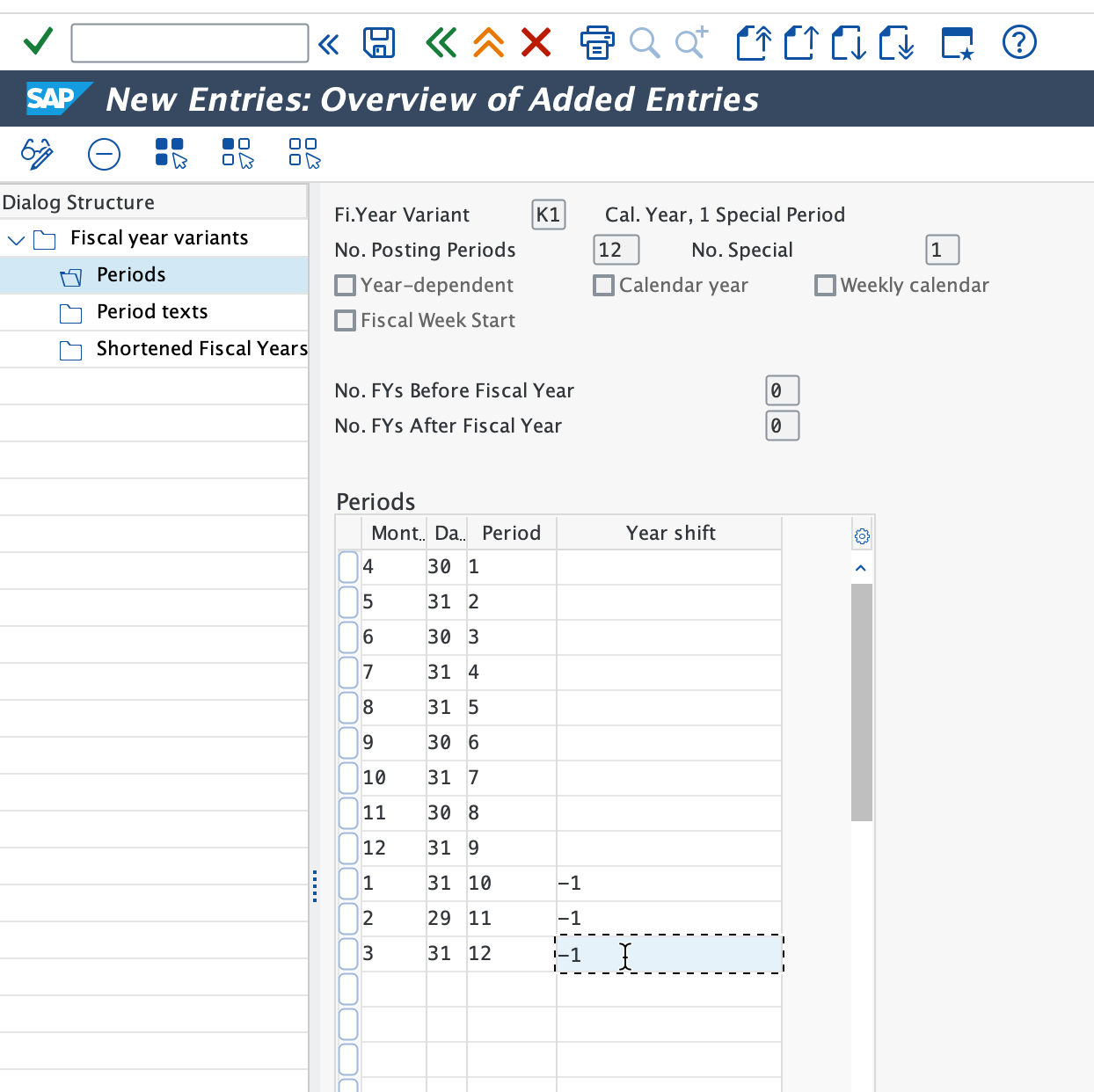 Tables T009 and T009B in an ABAP source system contain the metadata of the fiscal calendars in your source system. First, these tables need to be replicated to SAP Data Warehouse Cloud, before we can run a procedure to generate the full calendar. Below two screenshots of the content of these tables. 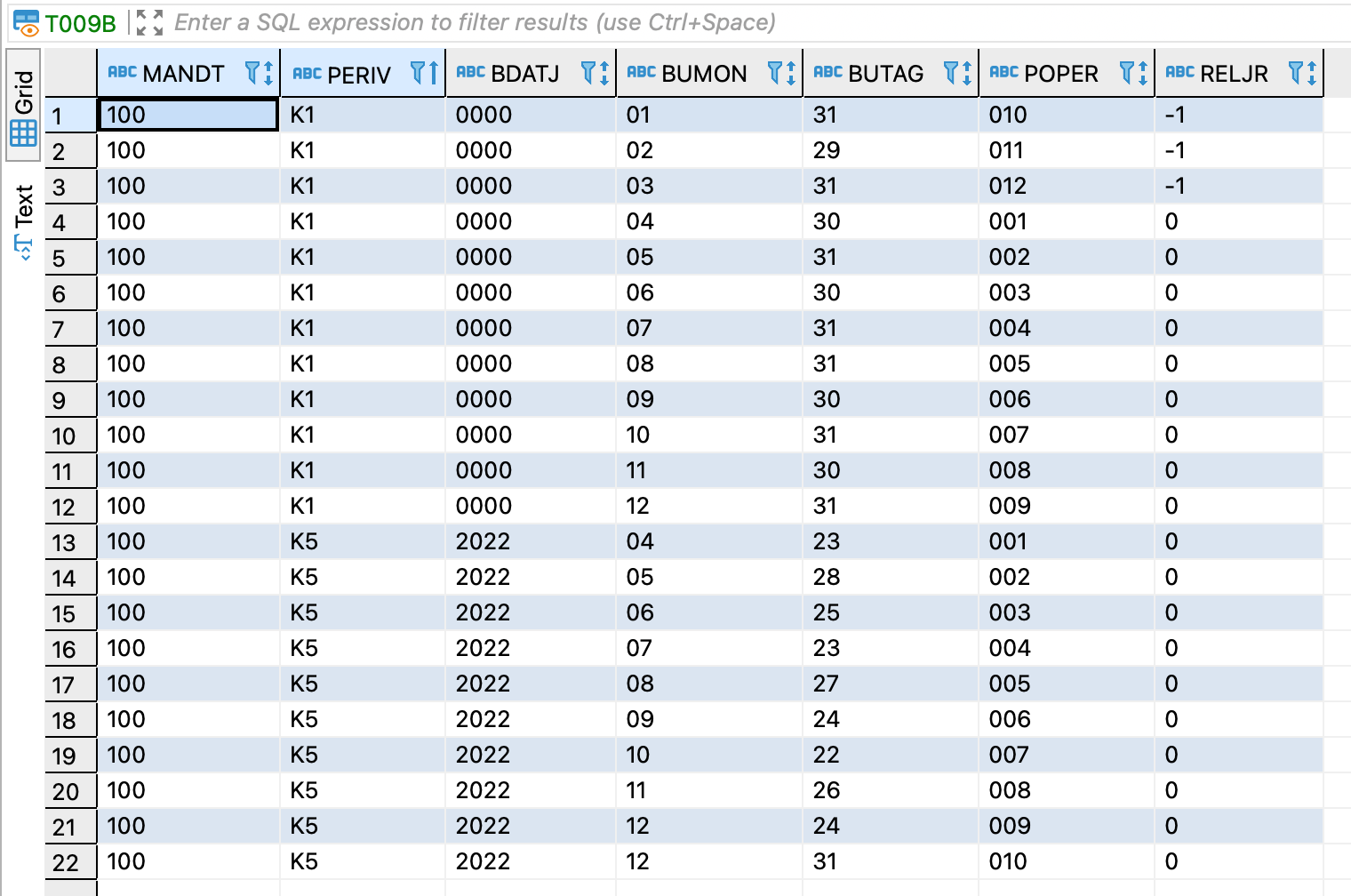 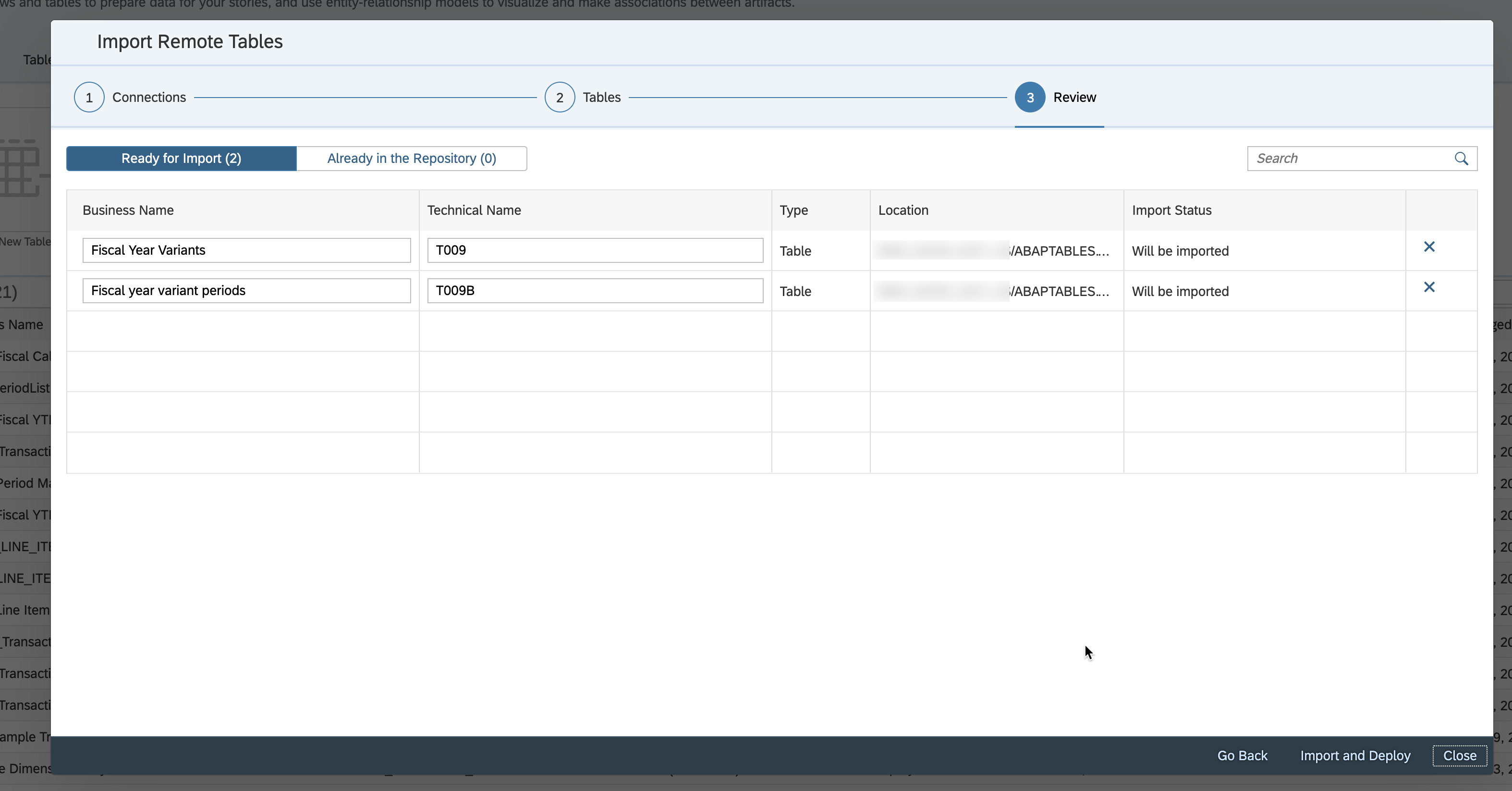 The generator procedure that creates the fiscal calendar data can only be called from the Open SQL schema. Therefore, to run the procedure using the T009 and T009B tables, these first need to be exposed to the Open SQL schema. At time of writing, tables cannot be exposed, only views. So we first need to create a wrapper view around each of the tables. In my case, I have called those LV_T009 and LV_T009B. 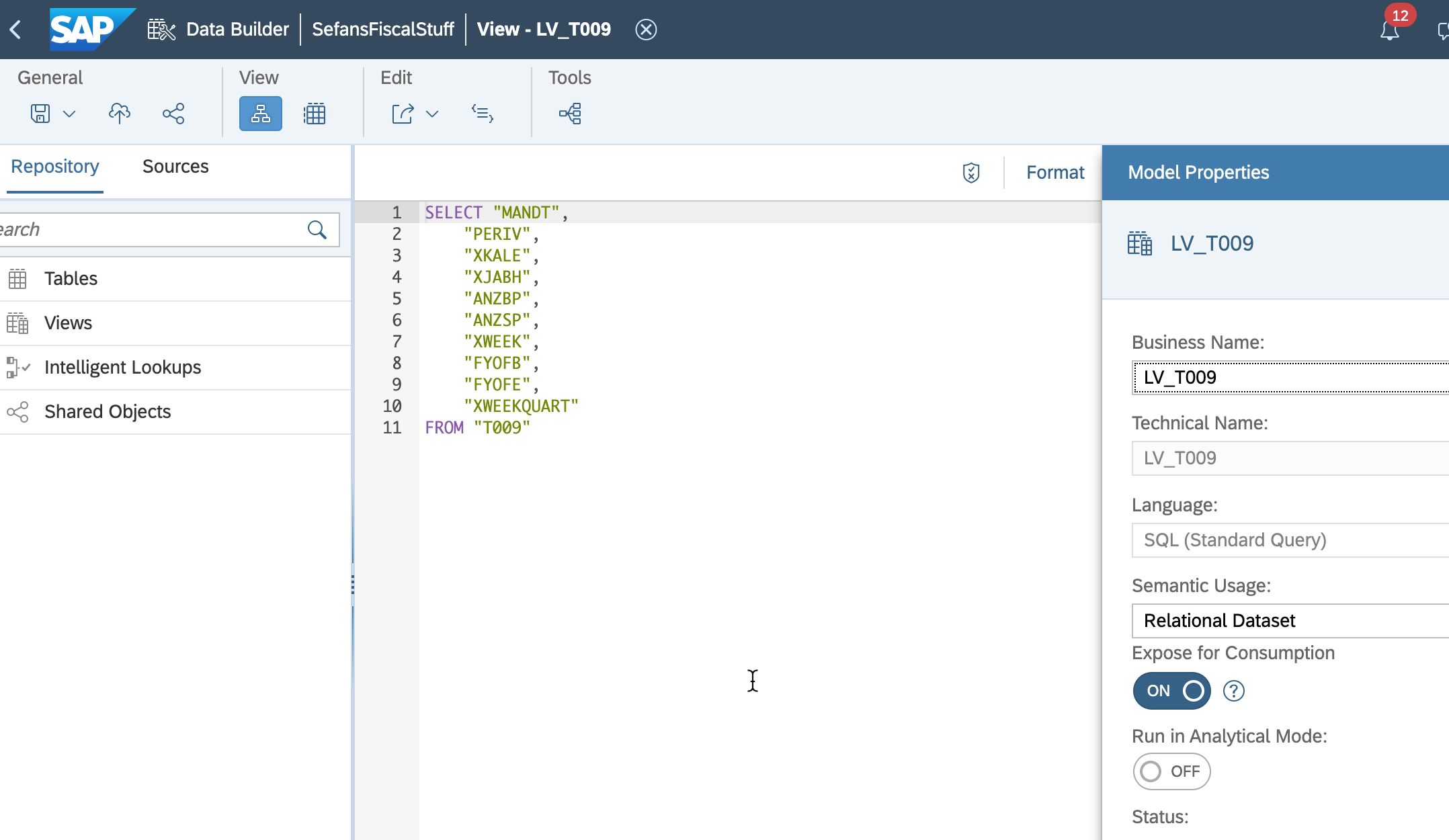 If you do not have an Open SQL schema created yet, create a database user in the space management. Enable Read Access (SQL) and Enable Write Access (SQL). 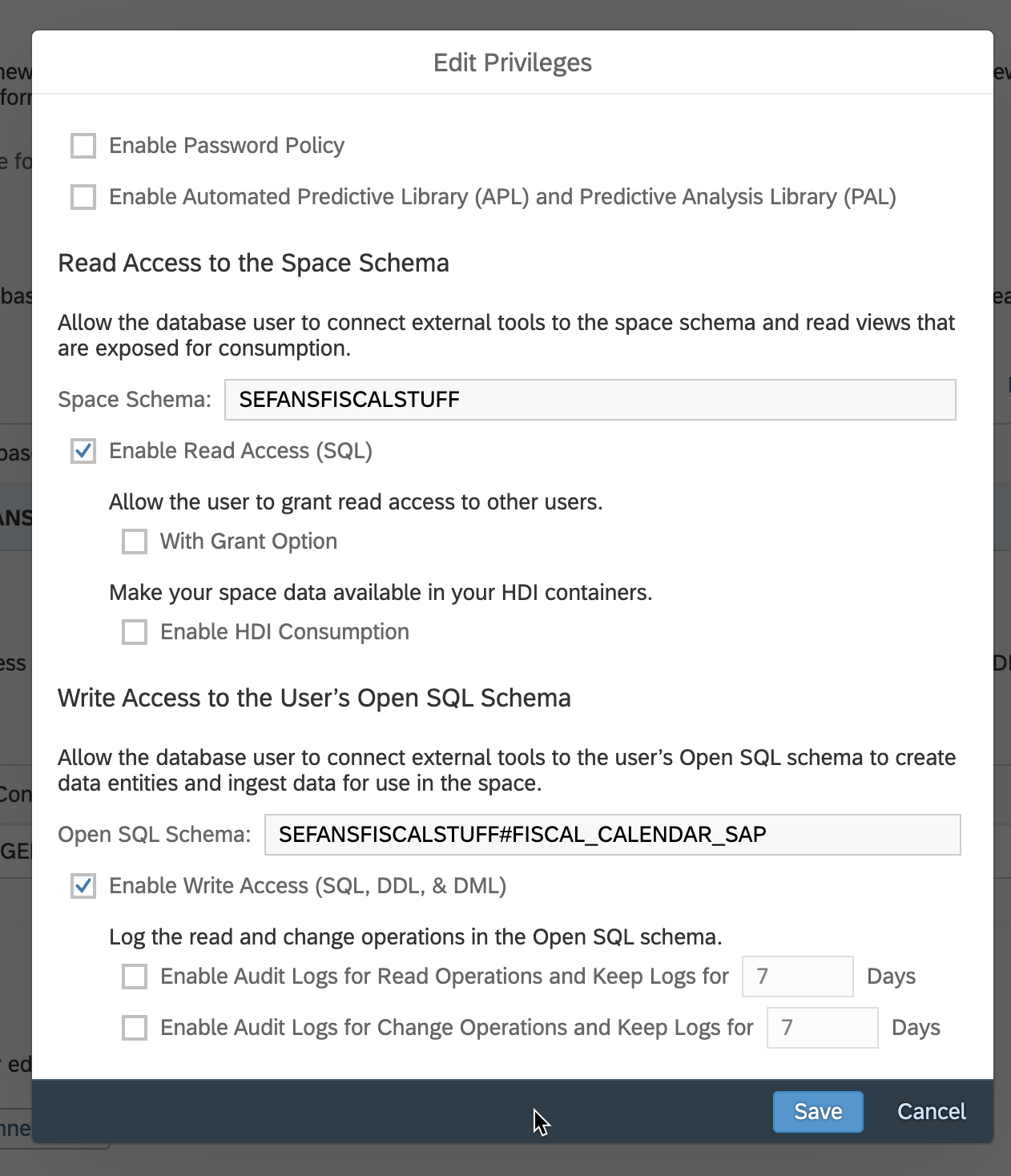 We need a target table for the procedure to write the data to. Below the code for such table. For your reference, the structure of this table is derived from table _SYS_BI.M_FISCAL_CALENDAR, which already exists in the HANA database underneath your SAP Data Warehouse Cloud instance. However, you will not have the rights to write to this table, hence we create the table ourselves.

Before you can run the procedure, you need to create copy tables with the data from the exposed views, and you need to create synonyms pointing to those tables. This seems kinda random, but the reason for this is that the procedure to generate the sample data is very specific with regards to its input requirements. Usually, this procedure is called from a UI, such as from SAP HANA Studio, or from SAP Business Application Studio, where these pre-requisites are already met and hidden from the end user.

Now the procedure can be run. The procedure UPDATE_FISCAL_CALENDAR is already residing in the HANA database underneath SAP Data Warehouse Cloud, and you should be able to execute it directly using your Open SQL schema user. Use the below code, and adjust the parameters where necessary.

Now, the fiscal period data should be generated in the target table in the Open SQL schema, and you should be able to consume this data back again in SAP Data Warehouse Cloud, as you can see in below screenshot. 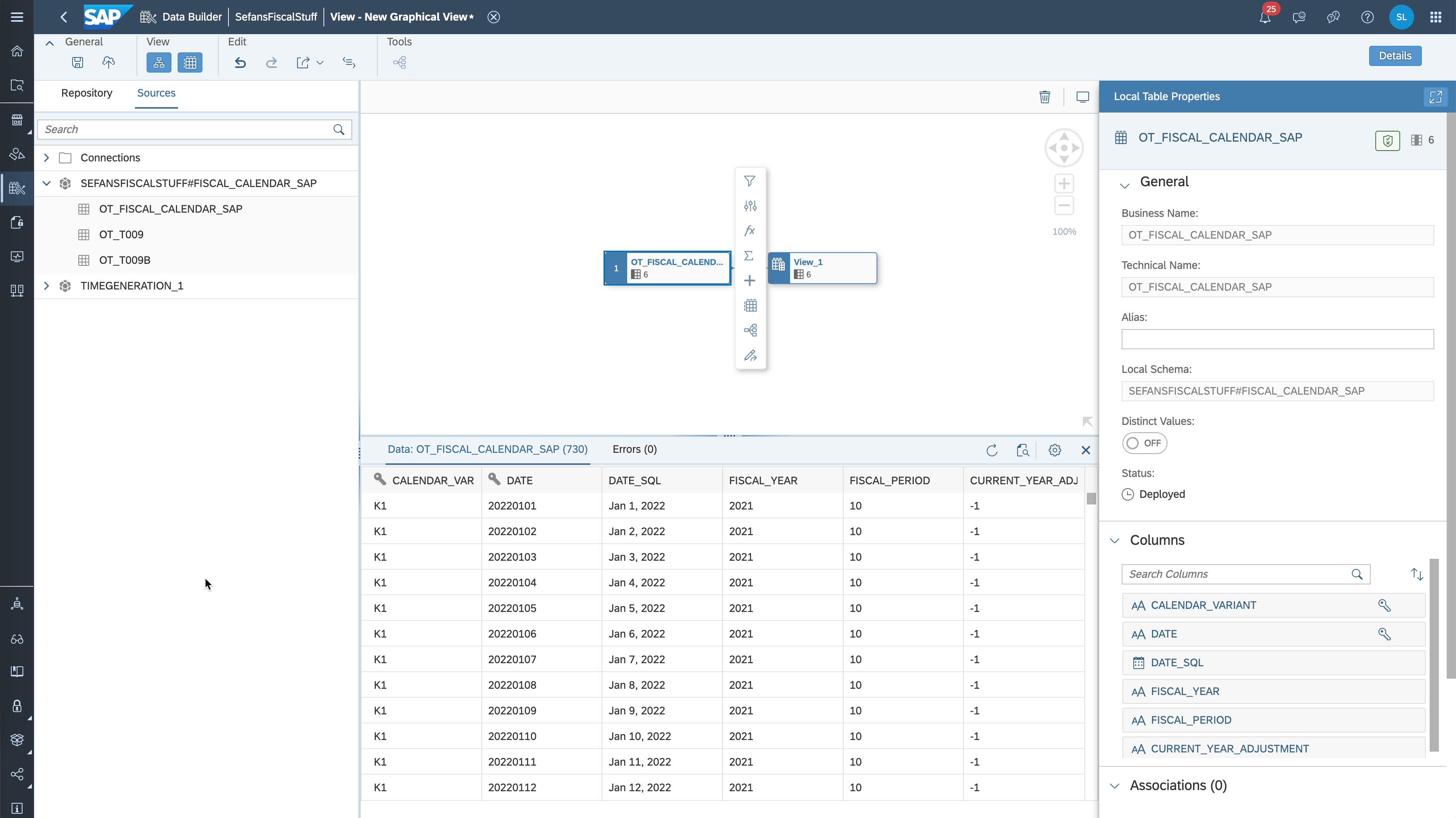 In case the procedure generation does not work as expected, you can run a trace for diagnosing so-called “built-in procedures”. The below two statements denote turning on and turning off such trace. The trace can then be found in the indexserver.trc file.

While writing this blog, I first ran the procedure without using synonyms to point to the source tables T009 and T009B. The below error was thrown, which pointed out the issue.

This blog explained how to generate fiscal period data, using a procedure that is delivered already with SAP Data Warehouse Cloud. This is the first step in working with fiscal reporting. In subsequent blog posts I will run through examples on how to build KPIs on this.