Depending on your configuration options (measures or account-type model, dimensions analysis, etc.) the retrieval of your data can dramatically change in the Waterfall Chart.

In some more complex cases, it might be worth considering leveraging a dedicated model.

If the waterfall retrieval of your data is key to your business user, then please include the waterfall requirements at the beginning of your project, if you didn’t, you can always try our alternatives😊

All our examples and workarounds are based on the new model.

This blog has been created with the great help and knowledge of my colleague Christian Schoenbein, from the Analytics Competence Center, T&I HANA Database and Analytics.

This example is based on a model with a generic measure (like Amount), comparing 2 different versions (like Actual and Budget) based on a generic dimension. The Waterfall Chart shows the variance between both versions broken down on the generic dimension’s hierarchy.
Please note that you need to activate the Variance Waterfall property.

Configuration of the Waterfall chart

This example is based on a model with only several measures and a calculation summing all measures.

Calculation based on Measures

The waterfall shows the impacts of the different measures of the calculated measure between two different versions (Actual and Budget ).

Configuration of the Waterfall Chart

Please note that the detail of the calculation formula cannot be expanded in the waterfall chart, this feature is only available for hierarchies of a dimension.

In this example, the Waterfall Chart displays the variances between both versions (Actual and Budget) broken down on the Account dimension hierarchy.
You can select and order the leaves or the nodes of the Account dimension you want to display in the waterfall chart including the Variance Waterfall option to show the difference between the versions.

In this configuration, you can also use formulas on the Account dimension.

The order in the chart depends on the configuration selection. 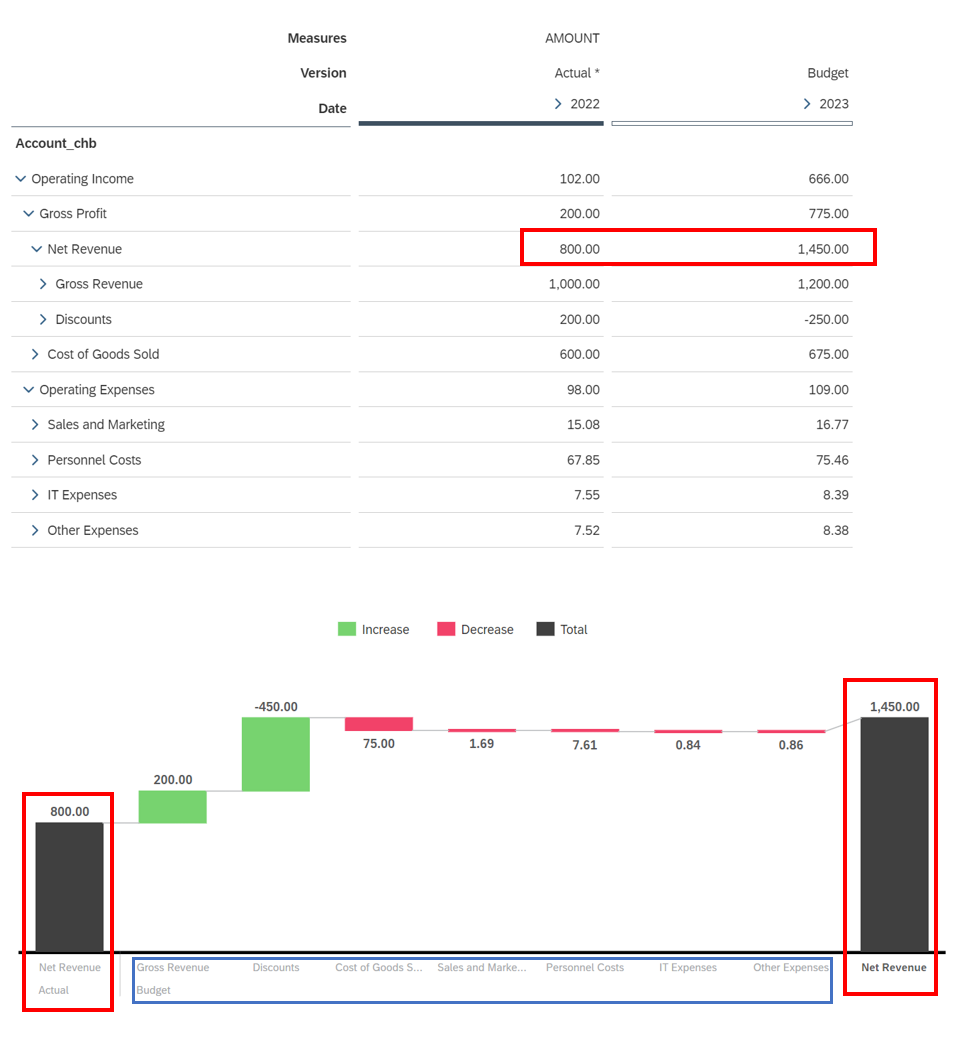 Configuration of the Waterfall Chart

Example 4 – Workaround for a Model with Account and several Measures

As mentioned above, you cannot create a Waterfall Chart based on multiple measures if you your model contains an Account-type dimension.

The solution follows these steps:

Creation of the technical dimension 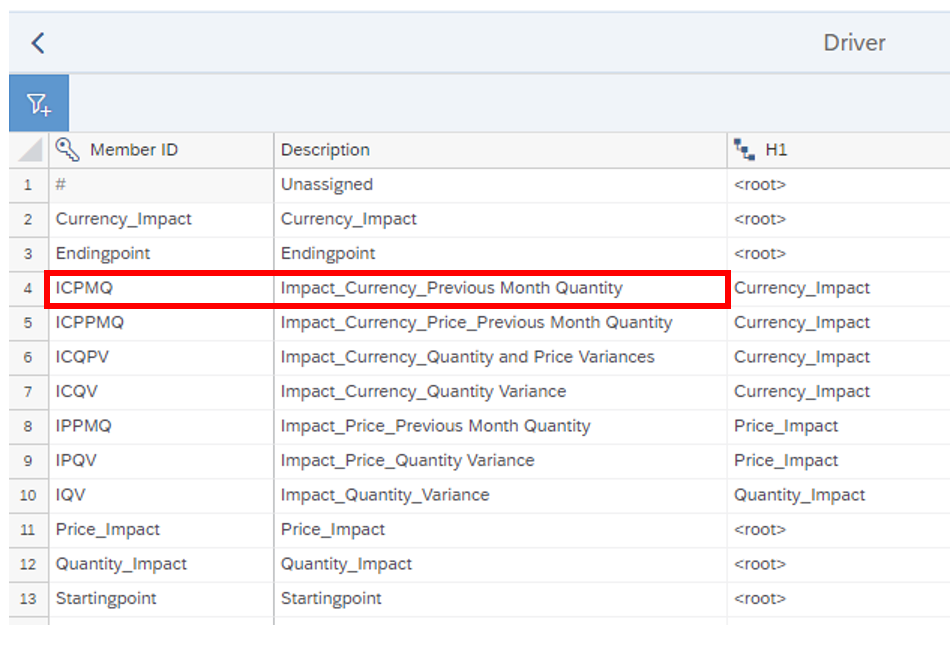 Creation of the measure 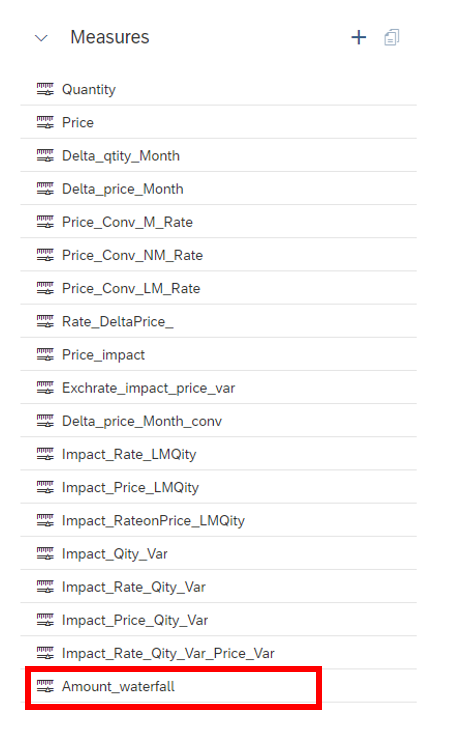 Data actions configuration
Example of the configuration of one allocation of the data measure to the technical dimension member. 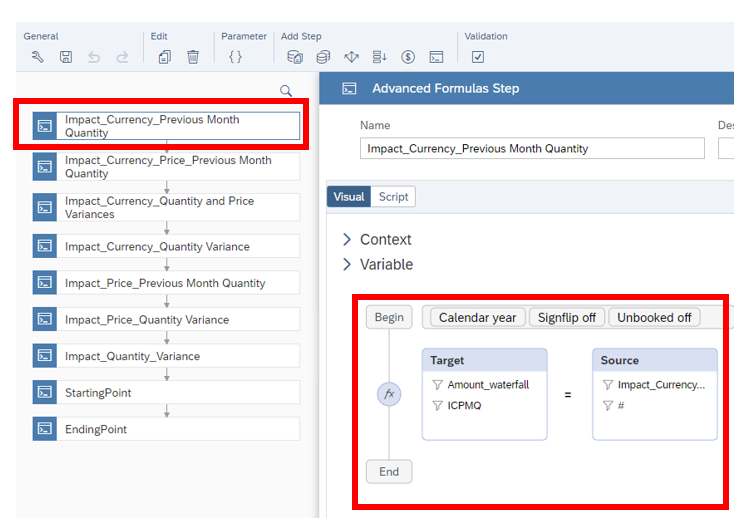 Send the data to the starting and ending points of the Waterfall Chart. 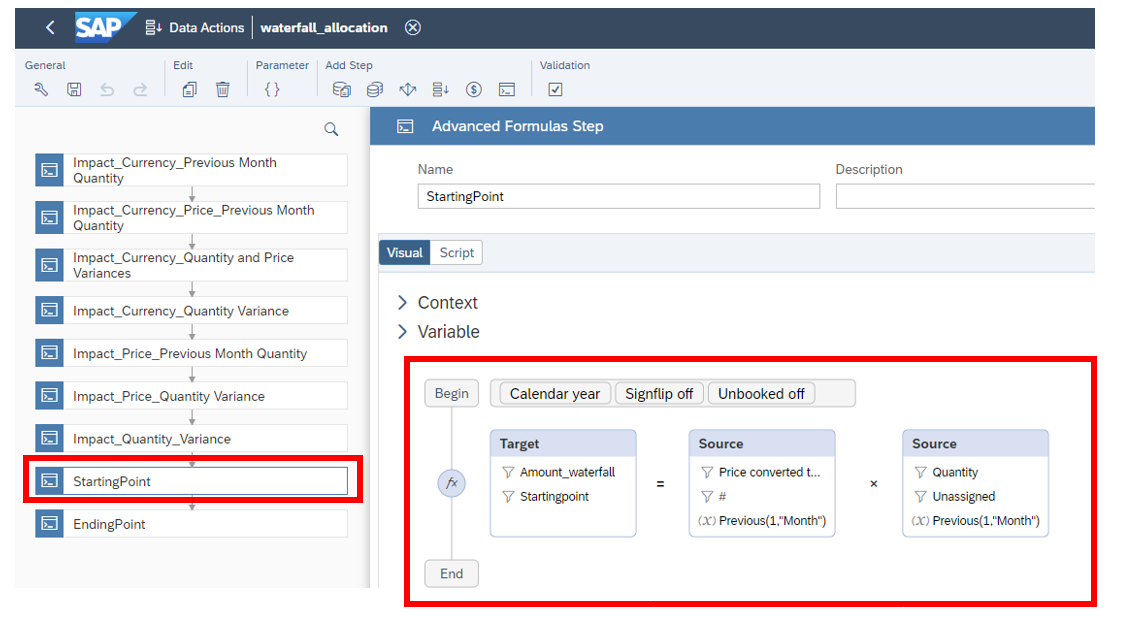 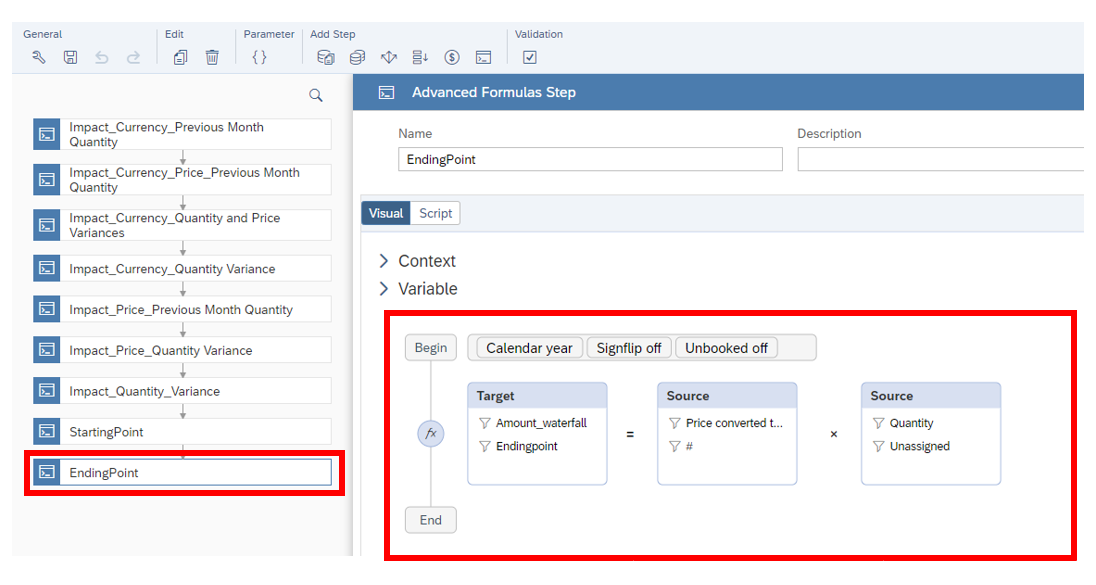 This latest data action could be enhanced with parameters to allow the end user to select the month of the “Ending point” when running the data action.

Great piece, really good article and only one comment... IBCS would normally advise to use Vertical orientation only for charts with a TIME based dimension, all other dimensionality should really use a horizontal orientation.