ABAP Cloud has been announced at SAP TechEd 2022 and was part of Juergen Mueller’s day 1 and Philipp Herzig’s day 2 keynote. After SAP TechEd, we provided more details regarding ABAP Cloud in an SAP developer community session and in the keynote of the ABAPConf (in German).

In this blog post, we summarize the basics of ABAP Cloud. At the end, you find links to all the information you need to become an ABAP Cloud developer. Stay tuned – early in 2023 we plan a comprehensive ABAP Cloud blog post revealing technical details about the main ABAP Cloud scenarios.

ABAP Cloud – What is it?

… is the ABAP development model to build cloud-ready business apps, services, and extensions.

… works with public or private cloud, and even on-premise.

The main ABAP Cloud elements are:

The transformation from classic ABAP to ABAP Cloud has been an evolution.

During the past decade, the ABAP Platform unit has been very innovative to support the development of the SAP S/4HANA product and to enable ABAP-based cloud solutions and extensions. The key ABAP Cloud elements CDS, RAP, and the ABAP Development Tools in Eclipse were introduced with or even before SAP S/4HANA and can be used since years.

With our ABAP PaaS offering SAP BTP ABAP Environment (Steampunk), we support customers and partners to build and run ABAP-based cloud apps on SAP BTP. Here, we added the cloud-optimized ABAP language and the first set of public local SAP APIs to the ABAP development model.

The next step was to reuse this cloud-ready ABAP development model in SAP S/4HANA.
In 2022 we launched the SAP S/4HANA Cloud ABAP Environment (Embedded Steampunk) allowing customers and partners to build custom ABAP code directly on the public cloud edition of SAP S/4HANA. This can be a game changer in the public cloud, considering the rich extensibility offering of the ABAP environment!

With the SAP S/4HANA 2022 release we added the new cloud-ready ABAP development model to the private cloud and to the on-prem edition of SAP S/4HANA. This enables customers to choose on ABAP object level whether to use classic ABAP or ABAP Cloud. Again, an evolution – no revolution!

The following picture illustrates the journey to ABAP Cloud. 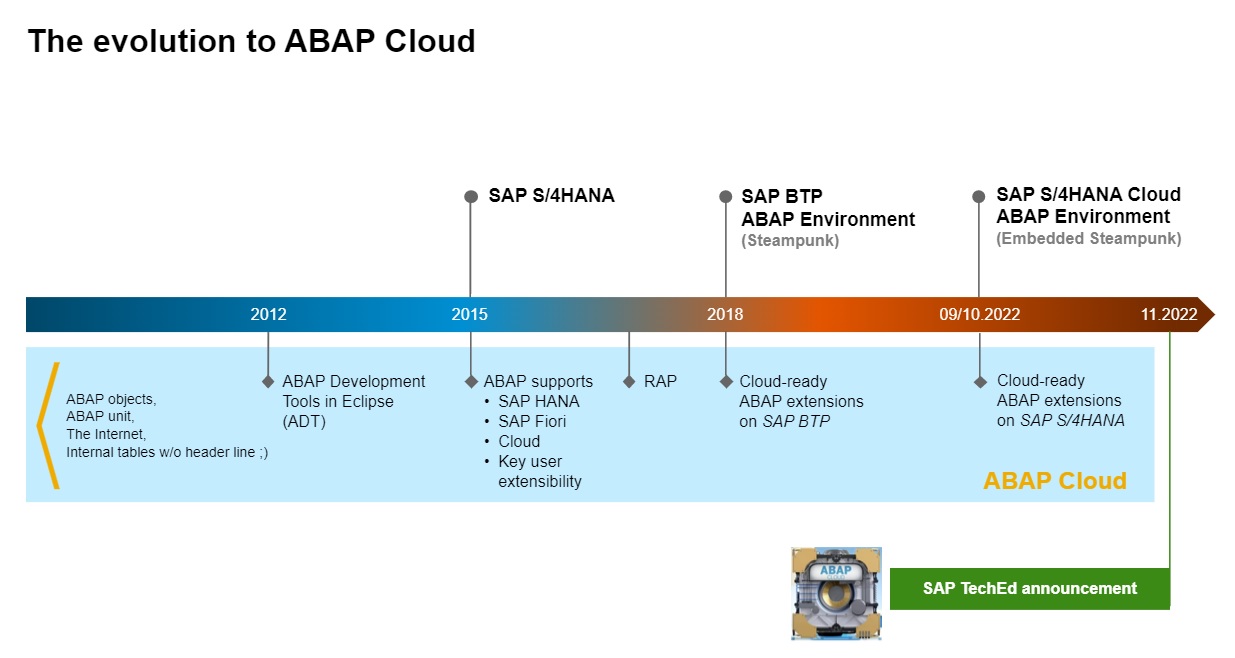 ABAP Cloud – How can I use it?

Already today, ABAP developers can start using ABAP Cloud elements like ADT, CDS, or RAP in their SAP S/4HANA systems. The complete ABAP Cloud development model, including the cloud-optimized ABAP language and public local SAP APIs and extension points, is available in SAP BTP ABAP Environment and in the 2208/2022 versions of the SAP S/4HANA editions.

The following picture shows the details. 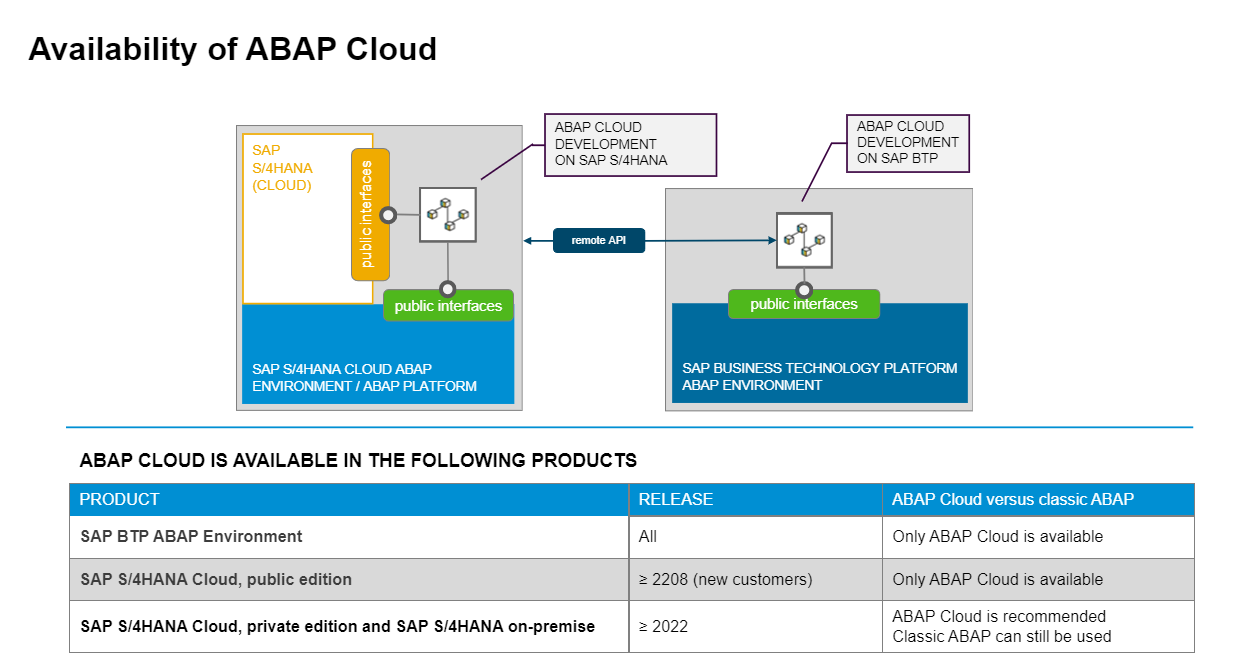 ABAP Cloud – What is in?

ABAP Cloud is a comprehensive development model covering all aspects to build business solutions. This includes integration scenarios, transactional or analytical apps, and the complete tool and lifecycle support – be it a rich IDE for professional developers or low-code/no-code tools for key users. 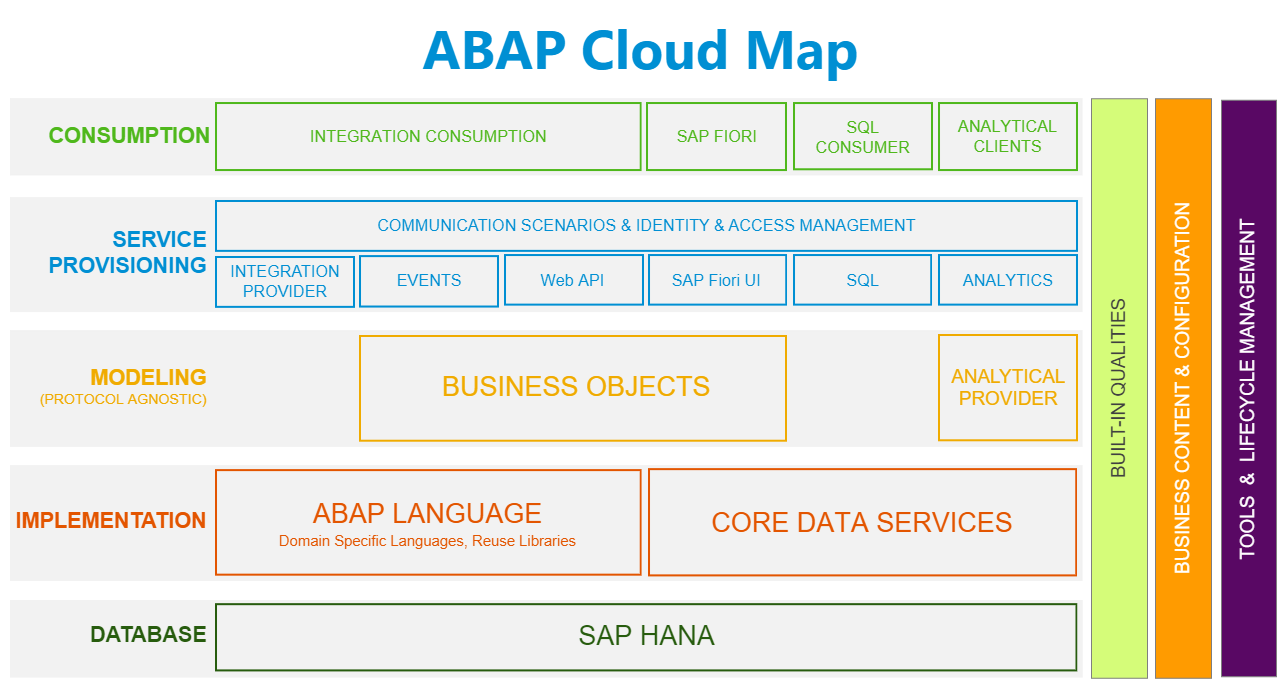 If you miss RAP in this picture stay tuned. In our next ABAP Cloud blog post we will explain all the elements of this ABAP Cloud map in detail, and you will see which boxes belong to RAP.

ABAP Cloud – Where can I find more information?

Glad to see that Analytics has a solid place in the ABAP Cloud Map. Looking forward to even deeper Analytics-integration into the programming model and even more flexible extensibility tools.

Thanks for the nice summary, Boris!

Is my understanding correct that ABAP Cloud comes with no additional cost/license for any S/4HANA Cloud and S/4HANA on-premise system?

In SAP S/4HANA Cloud, public edition the developer extensibility (Embedded Steampunk) is a new capability and you need a special development user to develop with ABAP Cloud.

Thanks for sharing this great news!

Seems like customers can keep more customized objects when migrating to Cloud private-edition.

Why does ABAP on Cloud needs to be introduced so many times? Did not the previous CTO announce it. Is it a campaign to hard sell a model not selling?

This seems to be a misconception.

The product SAP BTP, ABAP Environment has been launched some years ago.

Now we launched the new development model ABAP Cloud. (Perhaps we should have considered a name like ABAP 5 to make it harder to mix it up with Steampunk... 😉

This new cloud-ready ABAP development model was first introduced in Steampunk allowing customers to build custom ABAP apps and extensions in the cloud on SAP BTP.
In 2022 we achieved that this ABAP Cloud development model is also available in all SAP S/4HANA editions, allowing customers and partners to build cloud-ready and upgrade-stable custom ABAP Cloud code directly on the S/4HANA stack.

This “general availability” of the development model ABAP Cloud was the trigger for the ABAP Cloud announcement.

More details can be found in this ABAP Cloud blog post.

thanks for this Blog - very valuable information!

One question: Is it possible to develop an application with ABAP Cloud in a SAP S/4HANA on-premise system and then deploy it in a SAP S/4HANA Cloud public edition system (or vice versa)? If so, what mechanism could be used for that?

We use the same ABAP Cloud development model in the different environments (SAP S/4HANA editions, ABAP environment on SAP BTP). This includes the allowed ABAP statements and most of the supported ABAP frameworks. (There are e.g. differences concerning identity & access mgmt. and connectivity between on-premise and the public Cloud).

If you build an ABAP Cloud based app on SAP S/4HANA on-premise using only the available public SAP APIs then you have a good chance that this app will work in the public Cloud edition (Embedded Steampunk) as well.

To transfer the ABAP Cloud code please refer to this blog post: How to bring your ABAP custom code to SAP BTP ABAP Environment | SAP Blogs.

The same mechanism can be used to transfer you ABAP Cloud code from on-premise to SAP S/4HANA Cloud, public edition.