This blog post describes the Two-Tier scenario of MRP Visibility between headquarters and subsidiary which run on two different instances of SAP. Headquarters are expected to gain better visibility on the MRP results generated at Subsidiary end and vice versa. With this analytics scenario the much-required capability with Two-Tier integration to check the status of production planning and customer stock availability between headquarters and subsidiary is added which was not available in the earlier scenarios. This scenario supports organizations running on Two-Tier setup to have better coverage on the material demand and supply planning of replenishment elements between Tier 1 and Tier 2 systems.

Business Enterprises implemented with Two-Tier scenario involving sale and purchase of materials and setup wherein the subsidiary runs on SAP S/4HANA Cloud, public edition acting as Tier 2 and the headquarter running on any deployments such as SAP S/4HANA Cloud, private edition, SAP S/4HANA, or SAP ECC or any other ERP system acting as Tier 1 with business requirement to provide report on the product demand, planning and execution status to share between the systems.

SAP S/4HANA Cloud, public edition at subsidiary sends the demand for assembly to headquarter and in turn the headquarter receives the demand, plan, produce and deliver the same product back to subsidiary. Here, the subsidiary acts as a customer whereas the headquarter acts like a production unit and internal supplier. In this business use case, subsidiary and headquarters are not having the visibility on the material coverage between the Two-Tier companies. 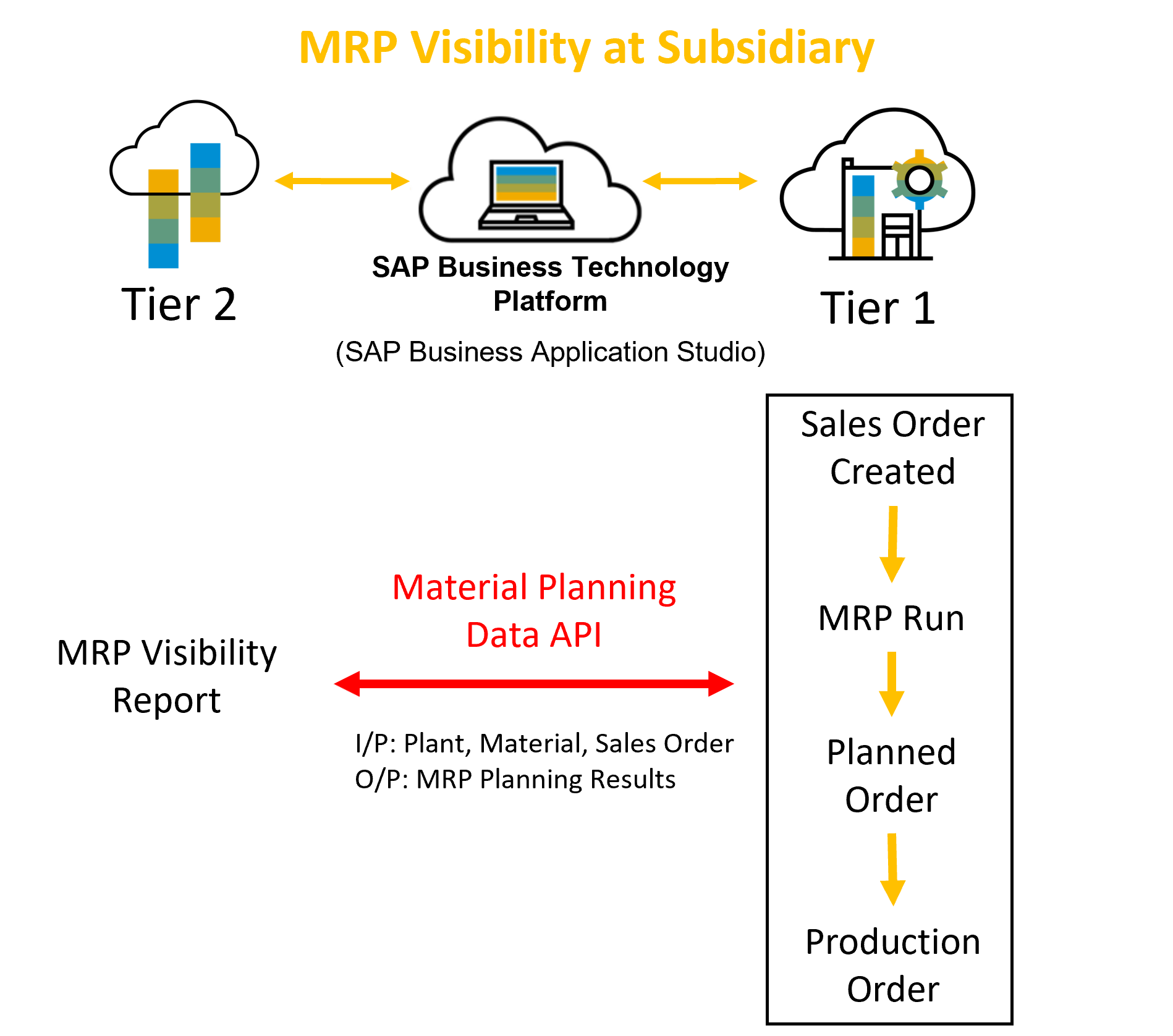 Let’s see here the activities at Tier 1 system which receives procurement request for the product as dependent demand from Tier 2 system where customer order is received. 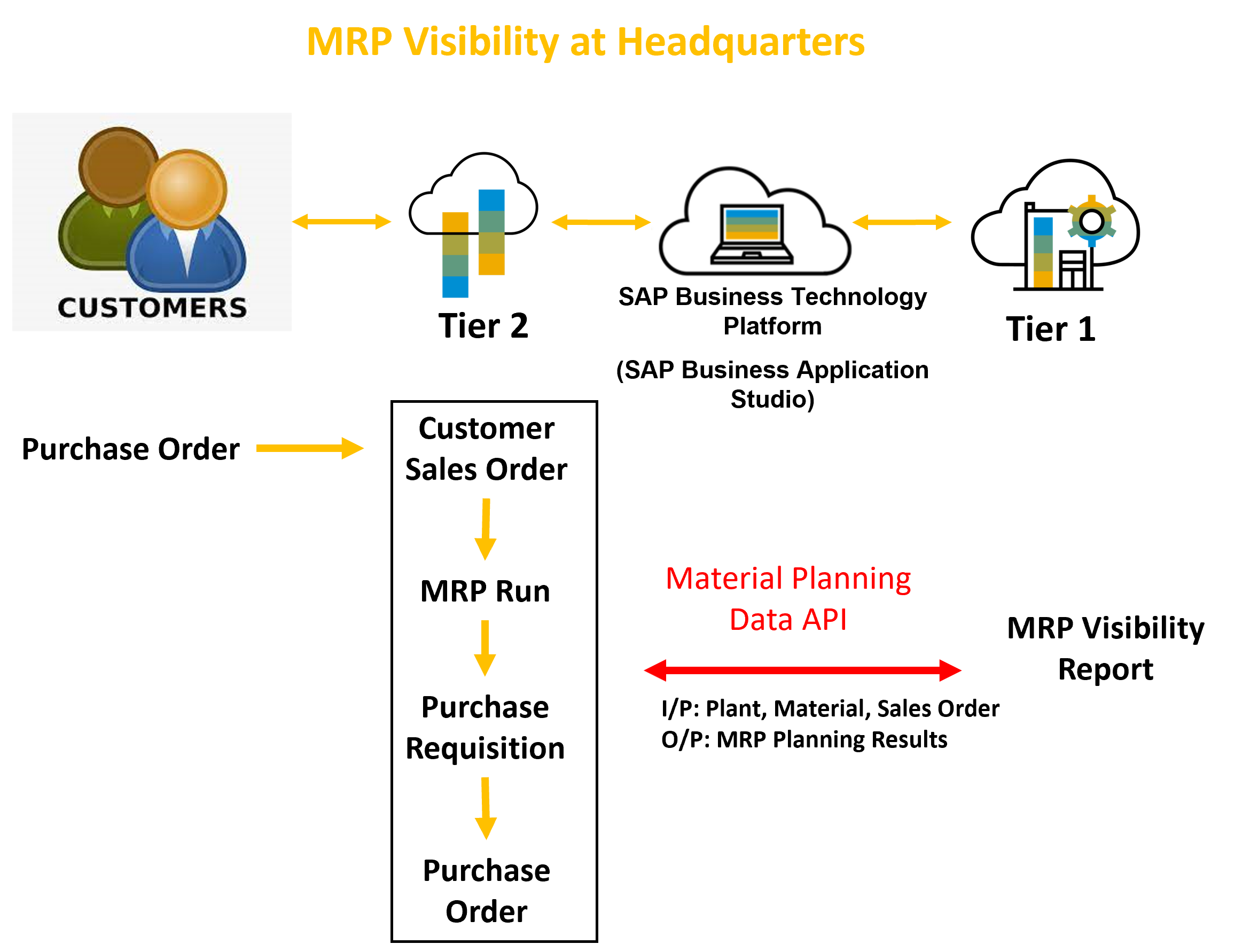 How to Build the MRP Planning Analytical app?

The below service in enabled at the Tier 1 system to read the MRP results from Tier 1 and display the same at the Tier 2 system.

For more details on how to connect to external source system with BAS, please refer to the blogpost

The above link explains on building Fiori app for sales order view and hence it uses sales order service while creating project.

To build MRP Visibility app, assign the API service ‘ZAPI_MRP_MATERIALS_SRV_01’ that was created as pre-requisite when creating project under Data Source and Service selection step. 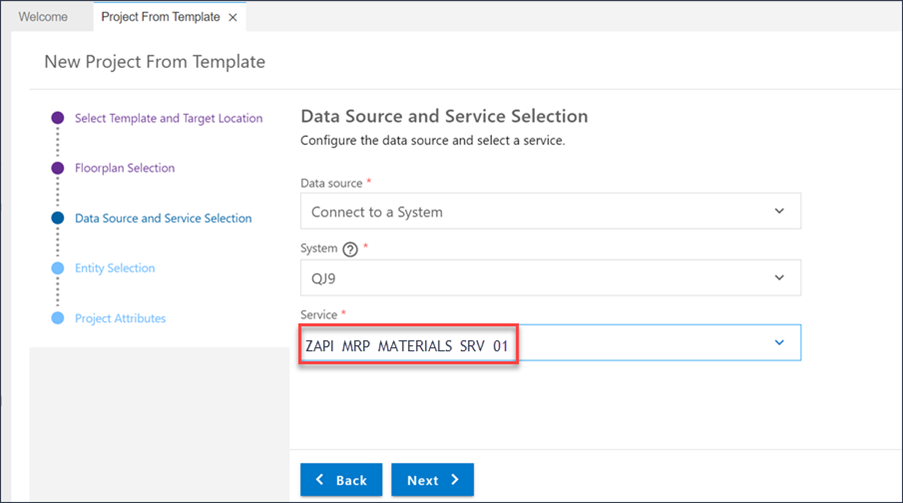 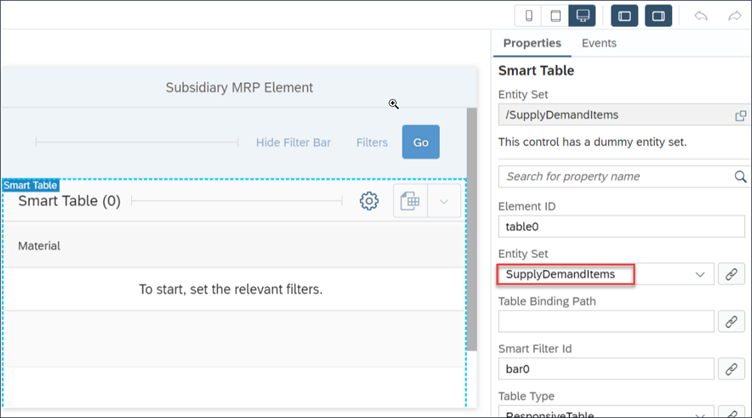 Binding Fields in the Smart Table

Once the Fiori application is deployed, same can be accessed from two-tier systems.

MRP results view – It displays the Production document created against the sales order (MRP Planning Segment) and the stock availability for the customer requirement.

Hence by using SAP Business Application Studio, Fiori application for the Material Requirement Planning Visibility in two-tier ERP can be built and deployed in two-tier systems.

Very well explained scenario with steps to set up this scenario Thanks!!