Clean code is a term used to describe software that is easy to read, understand, maintain and test. In this blog I want to summarize some important principles and provide an entry into the topic for beginners. Besides, the blog shall connect to the style guide repository, the books and current initiatives where experts can contribute. If you do not want to miss an update on clean code, test automation, code reviews, unit testing, decision making, testability and other engineering / craftsmanship / architecture topics, subscribe to the brand new newsletter.

Achieving clean code involves following a set of best practices and standards, such as using meaningful names, keeping functions small and focused, and using comments sparingly. Having a code base, which is readable and maintainable is essential for sustainable development. The books Clean Code from Robert C. Martin, Code Complete from Steve McConnell, The Pragmatic Programmer from David Thomas/Andy Hunt, and some other books contain many best practices and examples for clean code.

What is code that’s not clean?

Code that is not clean is code that is difficult to read, understand, and maintain. It may have poor organization, confusing or misleading names, inconsistent styling, and other issues that make it harder to work with.

Some examples of code that is not clean might include:

Overall, code that is not clean is often more prone to errors and bugs, and can be more time-consuming to work with, as it requires more effort to understand, test and maintain.

There are many benefits to writing clean code, including:

Overall, clean code can help ensure that your software is reliable, maintainable, and easy to work with, which can lead to increased efficiency, productivity, higher quality, and higher satisfaction of developers and users alike. The benefits of clean code extend beyond just the development process and can have a positive impact on the long-term success of the software and the team working on it.

First lets summarize some important principles for clean code and provide some simple examples. For every principle there is a lot more to learn in the style guide and the books.

Overall, clean code is an essential part of software development. It makes it easier to understand and maintain a system, and can help to prevent bugs and other issues.

Under the CC BY 3.0 license and open to contributions from inside and outside of SAP, we hope that this repository will help developers worldwide to make their code a little cleaner, day by day.

The long term goal of the style guide repository is to cover the most important programming languages in the SAP world. So far only ABAP is covered, but I am convinced that more is to come. Maybe we will also be able to cover Java, TypeScript, Kotlin, Go and more – rather a wish than close to reality.

There are several books, which cover the topic in detail, explain the reasoning and apply it to specific programming languages. 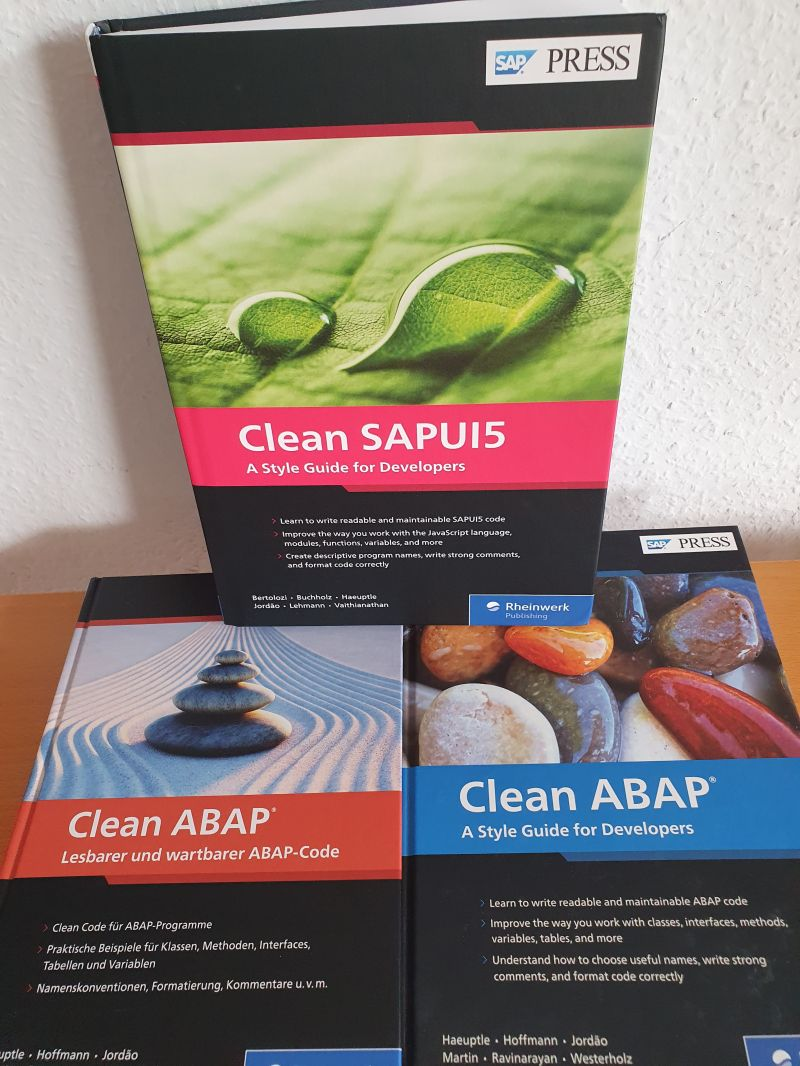 A Foundation for Improvement

This includes clarity on how those should be opened, are processed and the typical timeframe in which somehow can expect a decision. Besides, especially for changes with a larger impact (e.g. incompatible changes) we need a formal process for decision making, since those changes will also be reflected in static code checks and by that affect a large number of developers.

In the last months we have worked on documenting the whole process and written down our guiding principles for involving the community and making decisions. The process will soon be published.

If you do not want to miss an update on clean code, test automation, code reviews, unit testing, decision making, testability and other engineering / craftsmanship / architecture topics, subscribe to the brand new newsletter. The newsletter will not only be used for sharing knowledge, but also offer opportunities for collaboration, building communities and co-creation.

No one feels the value of clean code than some one like me in SAP operations especially at the hour of need. Not to forget the benefit in terms of reduced business impact and MTTR! Overall great blog and must be made mandatory for all coders ! Thanks for sharing your thought!

Coding is fun, but as enterprise business software developers we need to think in terms of configurable software systems. Coding will create software that require long run maintenance, whereas configurable systems are robust.