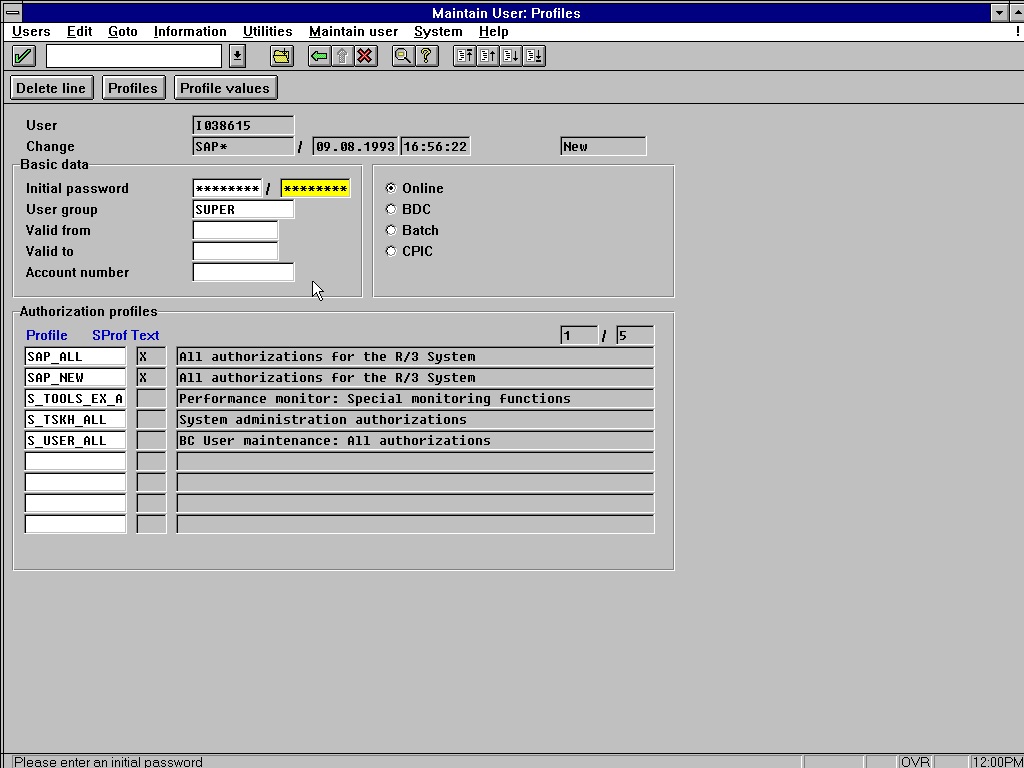 Usually I write about the latest tech trends, but this year is SAP’s 50th anniversary so to celebrate this significant milestone I wanted to do something special. I am a collector of old computers and software and have a passion for these vintage systems. It’s a mix of nostalgia and curiosity for me, since I didn’t have the chance to use these machines when I was younger. I have a collection of old servers and hardware from SUN, SGI, CRAY, Apple… and I like to tinker with them occasionally so why not? why not try to find the oldest SAP software still available and see if I could install it.

SAP R/2 was not an option, sadly, it seems that part of SAP’s history is lost and there is very little information (even internally) and nevertheless an IBM mainframe was out of my budget. So, I had to settle my expectations for SAP R/3. After some internal digging I found a copy of SAP R/3 2.1D released in 1994 in one of the old file servers at SAP.

Installing Windows NT 3.51 turned out to be more difficult than I initially anticipated, the maximum capacity for the HDD at that time were 4GB so I needed to find special SCSCI drivers to install the additional hard drives as the initial installation of SAP R/3 2.1D requires around 26GB of disk space. Even for this early SAP release the hardware requirements were quite high for the hardware available in 1994.

The installation media could not be more simple, only 2 CDs with several TAR files compressed:

The installation process was quite straight forward, first you need to install Oracle 7: 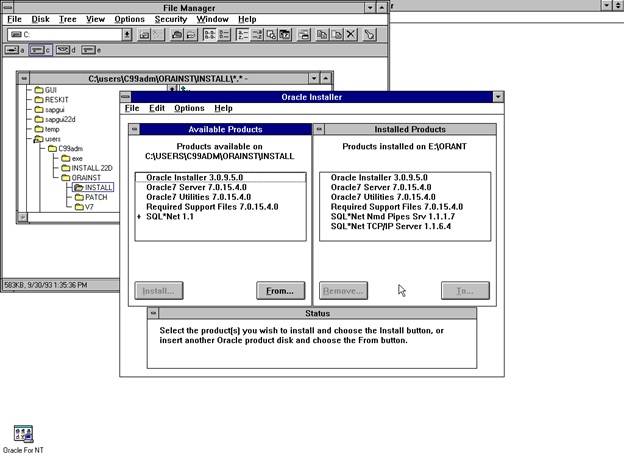 Before starting the SAP installation tool (R3inst) you need to perform some manual actions: Once you have completed this manual actions you can start the R3inst tool. This tool will create the SID database and import the oracle dump. If I am not mistaken R3inst was the original installation tool for the first SAP R/3 versions. Years later the R3inst tool was replaced by R3SETUP and later with the SWPM. The next step of the installation process was unexpected, as I had not encountered it in any other more recent SAP installations but it makes sense due to the technical limitations of the hardware available at that time. After importing the database you can use the tool abapload.bat to import the ABAP/4 load tables (D010L, D010Q, D010Y, D010LINF) and the Dynpro load tables (D020L and D020LINF). This was done to avoid having to regenerate the ABAP/4 loads with the program RSGENLDS which required 6-8 hours to regenerate all the ABAP/4 loads and had to be ran overnight when no users were working. Years later this program was replaced by the transaction SGEN.
The Dynpro loads from tables D020L and D020LINF were also included to be imported but as these tables are not hardware specific this was less problematic when installing on different hardware. 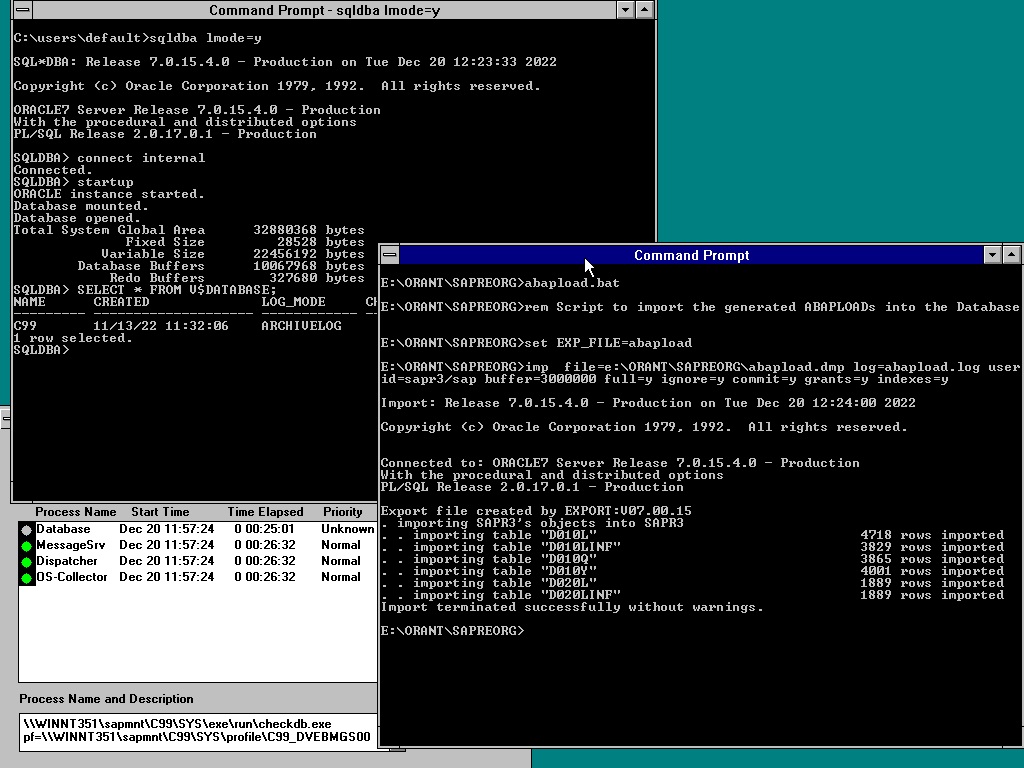 Upon completing the installation, you can use the SAP Service Manager to start the database and the SAP application server. Once they are running, you can use dpmon to verify that the dispatcher and work processes are functioning properly. It’s worth noting that in this version, the dispatcher process was referred to as ntpd.exe rather than disp+work.exe like in newer versions. However, all other aspects of the kernel are the same as in later versions. 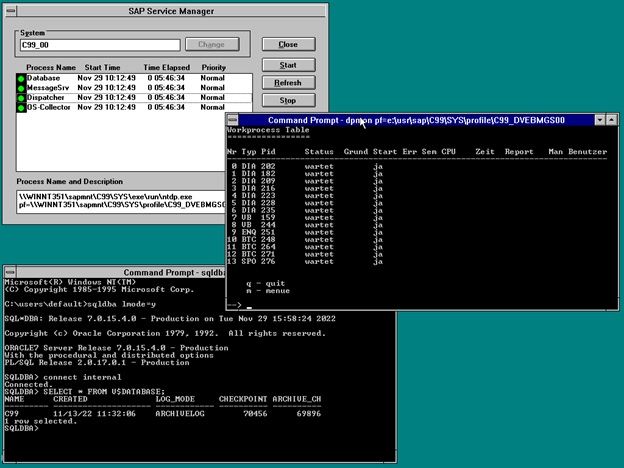 Logging in to SAP for the first time with the username SAP* and the default password 06071992 was an exciting moment!

It was surprising to find that there was no license check, as it appears that the licensing mechanism was not implemented until SAP R/3 3.0A as you can see below. This is likely because at the time this version of SAP was released, software licensing practices were not as developed and widespread as they are today.

After conducting an initial check, everything seemed to be in good order. The SICK transaction didn’t report any inconsistencies and the STATUS screen indicated that it was release 21D: 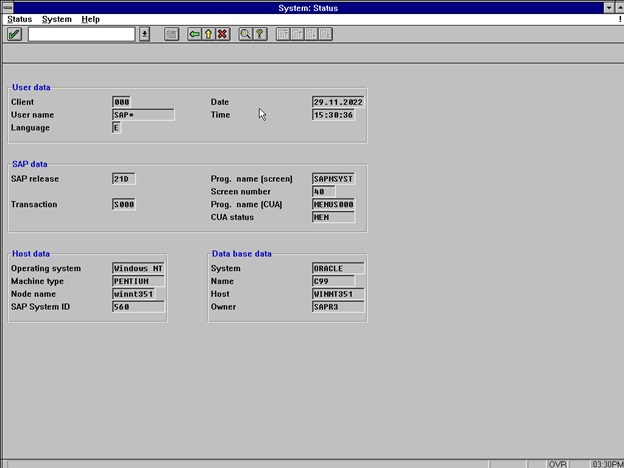 It is interesting to see the simplicity of this first version, with its initial menu containing only four main areas:

Later versions of SAP R/3 included more functionality and business processes, but it appears that this SAP R/3 2.1D version did not have support for Industry Solutions. At least, i have not been able to find any reference to this in the release notes.

As someone with a background in SAP basis, my initial interest was to test all the usual basis transactions, such as SM21, ST02, DB02, SM59, and ST06. It’s nice to see that all of these transactions were already available in this early version, and that the core functionality was already present.

Checking the transaction DB02, we can see that the initial installation of the SAP R/3 2.1D version requires around 12GB of data and contains only 1488 tables, it seems quite simple compared to modern versions like SAP ERP 6.0, which has more than 100,000 tables: 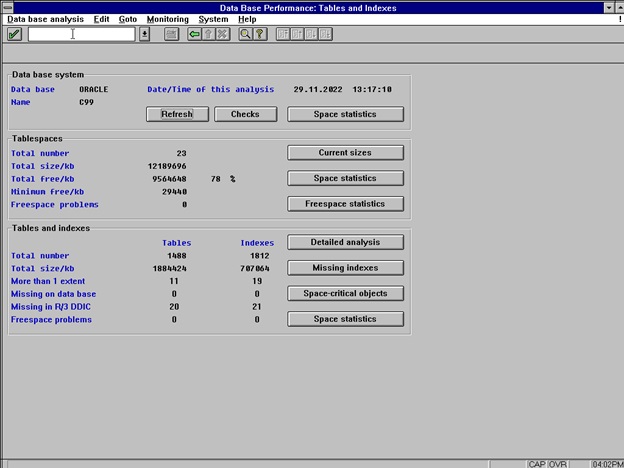 The ABAP/4 editor (transaction SE80), renamed later to ABAP Development Workbench in modern versions of SAP, was available from the first version of SAP R/3. While the ABAP/4 editor in these earlier versions was relatively simple compared to more recent versions, it was still able to be utilized for ABAP development. 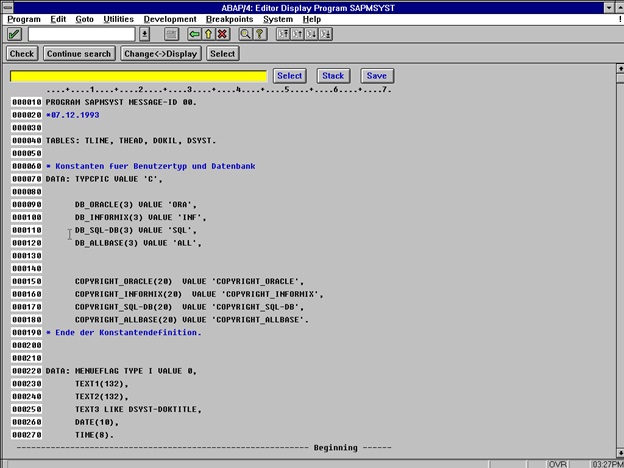 From a functional point of view, I didn’t explore too much but I was nice to see well known transactions like VA01 were already there in version 2.1D: 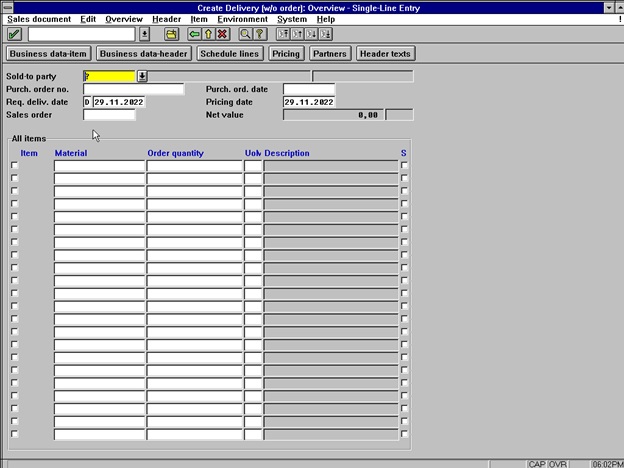 There are a few thoughts that come to mind when considering this early version of SAP R/3:

It is always interesting to look back at the history of a technology or software product and see how it has evolved over the years. It has been fun… but now it’s time to come back to 2022 and SAP S/4HANA.

It is nice to finally see the "face" of an R/3 version 2.1D. My journey at SAP started at the end of MySAP version and the beginning of NetWeaver. So, during my years of consulting I've never touched this particular version. All customers were already on version 4.7 or later.

One thing that passed through my mind is why companies like Microsoft and SAP never release such software versions for free. Nobody would ever use it commercially anyway. It is all about vintage software anyway.

BTW: Have you ever watched Adrian's Digital Basement on YouTube? https://www.youtube.com/@adriansdigitalbasement

Just watching him fix Apple II's and TRS-80 machines which ran MS-BASIC and CPM/M is overwhelming to me. It inspired me to get some modern electronics tools and try to fix some devices I had stored in a box for 30 years. It brings me back to High School where I had to build projects from scratch by dipping fresh copper boards onto acid after exposing it to ultra-violet light and stencils.

Unfortunately I don't have my Apple IIe computer clone anymore - I don't have the luxury of having space to store such things.

Anyway, this is a very nice blog. Congrats!

Totally agree with you, it’s a pity that SAP is not preserving this important part of his history (SAP R/1, SAP R/2, early versions of SAP R/3).

There are sites like bitsavers.org or web.archive.org where you can find vintage operating systems, software, manuals, games… for all the first IBM mainframes, DEC, SGI, Cray… even some companies provide their vintage software with a Hobbyist License to run it on emulators.

This blog post is really cool, very interesting to see how the system evolved over time (and in some places it might still look very similar). The oldest one I had logged into was 3.0F (it was still live in 2010 at a customer).

Talking about rarities and R/2, can you believe that SAP did a live demonstration of one R/2 system a couple of weeks ago for the SAP Alumni network? Unfortunately it was not recorded.

Yes, you're right, the SAP Alumni Network delivered a couple of SAP R/2 webinars and did some demos. I attended one of the sessions and it was amazing to see how programing was done in assembler before the ABAP/4 and how debugging was done on a real system.

Unfortunately, the sessions were not recorded.

👍 Good to look back and see SAP software evolved from R/3.

I started with SAP ECC 6 ❤️

Wow! Ancient Indeed huh? My original SAP contact was on 2.1 but I never installed it then. I moved into BASIS a little after the Jan/1996 Go-Live on 2.2D+ The + was simply an Company-specific customizing add-on back then. But I DO remember this little classic:

"Logging in to SAP for the first time with the username SAP* and the default password 06071992 was an exciting moment!"