Managing resources on SAP BTP – what tool do I choose?

There are myriad resources on the SAP Business Technology Platform, and different ways to manage them. In this post I outline a way to think about the different tools and when to use what.

The life and work of developers, Basis folks and operations specialists and those with similar roles are heavily intertwined, especially in this era of hybrid cloud, on-premises and DevOps-centric enterprise computing. One result of this is that it isn’t necessarily obvious which tools are for which roles, because the range of activities across those roles overlap quite a bit. This in turn means that folks might be scratching their head over what tools are available, relevant and appropriate in different circumstances.

In other words, with all these tools, when should I use what?

In no particular order, here are the tools that come to mind when thinking of managing resources on SAP BTP:

There are more tools of course; when you drill down from a subaccount and in particular into a runtime (such as a Kyma or Cloud Foundry environment instance) you’ll need environment specific tools such as the cf CLI or kubectl for Kyma (Kubernetes). There are also other peripheral CLIs such as the Service Manager Control CLI smctl, but the functions of this one in particular are also now available within the btp CLI. So given this, let’s focus on the “top level tools”, because it’s more obvious when you need cf and when you need kubectl, but less obvious at this top level.

What the tools are good for

I tend to think about these tools, from a use perspective, in a sort of inverted Y shape. Before drawing that shape, I’ll describe how I think of these tools and for what I think they’re ideally suited.

Ok, let’s get to that inverted Y shape.

Note that while I’m referring to this as a decision tree, it’s not a tree as such, it’s more of a map, because it’s perfectly valid (and recommended) to move around according to what you’re trying to do, and according to the context of your task, what you need to do, how often it needs to be done, and whether or not it needs to have humans or no humans involved.

The top half of the tree represents a potentially continuous movement between the SAP BTP Cockpit and the btp CLI. This of course will depend on how occasionally or how regularly your tasks bring you to the platform, and how comfortable you become with the command line (or how uncomfortable you eventually become being restricted to a graphical user interface, for that matter). It also depends on your skill level and confidence.

There’s absolutely nothing wrong with oscillating between the two boxes here; use the advantages of the excellent 10,000 metre view that the cockpit affords you, and then dig in for some real and more permanent work with the btp CLI. While at the btp CLI level, think about whether you want to automate some of what you do on a regular basis, with shell scripting.

At some point you’ll realise that you need to level up (or down in the case of this tree diagram).

It might be that you’ve come to the stage where you have a collection of related resources that you need to set up on a regular basis. For this, you’ll want to move to the more focused BTP Setup Automator. It’s great to be able to encode your requirements once and use that declaration going forward (and share it with others if needed too).

But is also might be that during your “main line” journey moving back and forth between the SAP BTP Cockpit and the btp CLI, you identify that there’s some specific activity that needs to be performed on a regular basis, perhaps as part of some sort of CI/CD pipeline. Or you might see that there’s a set of related activities that are very specific and that your organisation would benefit from a new custom program that makes that narrow set of operations available, either in a lights-out scenario or for use by others. For this, you can turn then to the APIs in the Core Services for SAP BTP API package.

For a platform as wide and diverse as SAP BTP, it’s clear that no one tool will be appropriate. For the various operations, administration and interactions with that platform, different tools with different approaches will be more or less suitable. And for the different levels of skills, regularity or interests, there are different tools that are appropriate.

Hopefully this post will make you aware of the different tools and facilities, and give you a better appreciation and understanding of what’s there for you.

Embrace them all, take some time to learn what works for you, and don’t be afraid to experiment. There are plenty of resources available, not least on the SAP Developers YouTube channel.

Let me know in the comments what your preferences are, what tools you use on a regular basis, and whether I’ve missed anything. 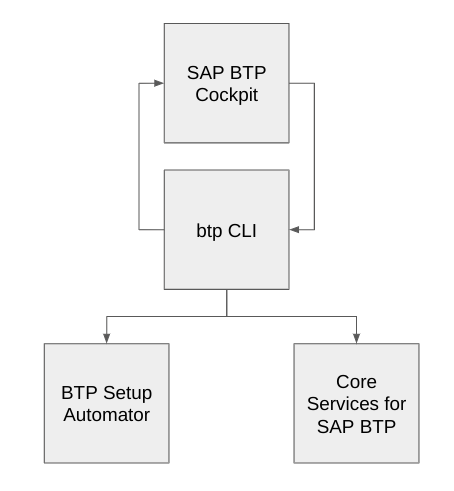