ABAP Platform 2022 is not shipped as a standalone product. ABAP Platform 2022 consists of the AS ABAP, the ABAP Development Tools (ADT) in Eclipse and several additional technology components which are required to run SAP S/4HANA.

One of the key investment areas in the ABAP Platform remains the ABAP RESTful application programming model (RAP). RAP is the recommended application programming model for efficiently building enterprise-grade, cloud-ready SAP Fiori apps and web APIs on the ABAP platform. Developers can use RAP whether they are starting from scratch or reusing existing business logic, both on-premise and in the cloud. Various new RAP features and capabilities have been delivered with ABAP Platform 2022. For instance, different options to develop lifecycle-stable and upgrade-safe extensions for a RAP business object (BO) on each layer of the RAP development stack are provided. Built-in extensibility options for data models, behaviors, and nodes of RAP BOs are provided. These options enable the development of full-fledged, upgrade-stable extensions on SAP S/4HANA and SAP S/4HANA Cloud, private and public editions. Developers can easily define and raise business events in RAP BO behaviors and RAP BO behavior extensions. This native business event integration enables lightweight, decoupled process integration based on standardized and stable APIs. The export and import of binary large objects (aka OData Streams) can now be easily enabled in in SAP Fiori elements-based apps built with RAP. The Read Access Logging (RAL) can now be used to monitor database read accesses performed in RAP services.

ABAP Development Tools in Eclipse in ABAP Platform 2022 deliver various enhancements for RAP, ABAP CDS and ABAP for SAP HANA developments. The Generate ABAP Repository Objects wizard makes it possible to generate RAP artifacts for an end-to-end transactional application based on a database table. The RAP Business Object test double framework enables you to isolate your code under test from the dependency on the EML statement call to the RAP Business Objects. The BO context of the Relation Explorer was enhanced by giving you more information about actions, their behavior characteristics, draft actions and associations. Enterprise event enablement and integration with SAP Event Mesh is now supported. The new RAP Business Event Bindings editor allows developers to define the mapping between RAP business events and the external representation of business events from SAP Event Mesh on SAP BTP. The additional improvements are offered in the source code tools, like new editors (for example for Number Range or Application Job objects) or support of restricted ABAP language syntax. Further developer productivity enhancements were implemented in the debugger like support of message breakpoints or download of ABAP value statements for internal table or structure for easy test data creation. Beyond this, various enhancements were done in working with transports, like moving objects between transport tasks and requests, and documentability capabilities, like KTD documents for ATC checks.

ABAP Platform 2022 also offers several enhancements in the code analysis tools. The Custom Code Migration App was reunited with SAP GUI based ABAP Test Cockpit (ATC) in the sense that now it is possible to create ATC run series in the app and schedule them in the ATC, further on Custom Code Migration app analysis results can be analyzed in the SAP GUI based ATC. The Custom Code Migration App in ABAP Platform 2022 now supports classic ATC custom code analysis projects. It has also become possible and is recommended to maintain ATC check variants and implement custom ATC checks directly in the ABAP Development Tools in Eclipse.

Connectivity, integration, and security areas were further optimized in the ABAP Platform 2022 like for example enablement of support of business event consumption, offering the capability for the quick activation and consumption of services (SOAP, OData V2, OData V4), support of OpenID Connect (OIDC) for logon to ABAP systems, traceability of changes in the secure by default settings, restriction of data access for financial auditors and support of IANA time zones in ABAP user settings.

This presentation provides the official slide deck, just click on it to view:

Happy 10th anniversary to the ABAP Development Tools in Eclipse!

Get started with the ABAP custom code migration process

How to enable clean code checks for ABAP

How to use Embedded Steampunk in SAP S/4HANA Cloud, private edition and in on premise

How to make your custom code cloud-ready and upgrade-stable

Finally a declaration of immutable variables with FINAL in ABAP

SAP NetWeaver AS for ABAP 7.52 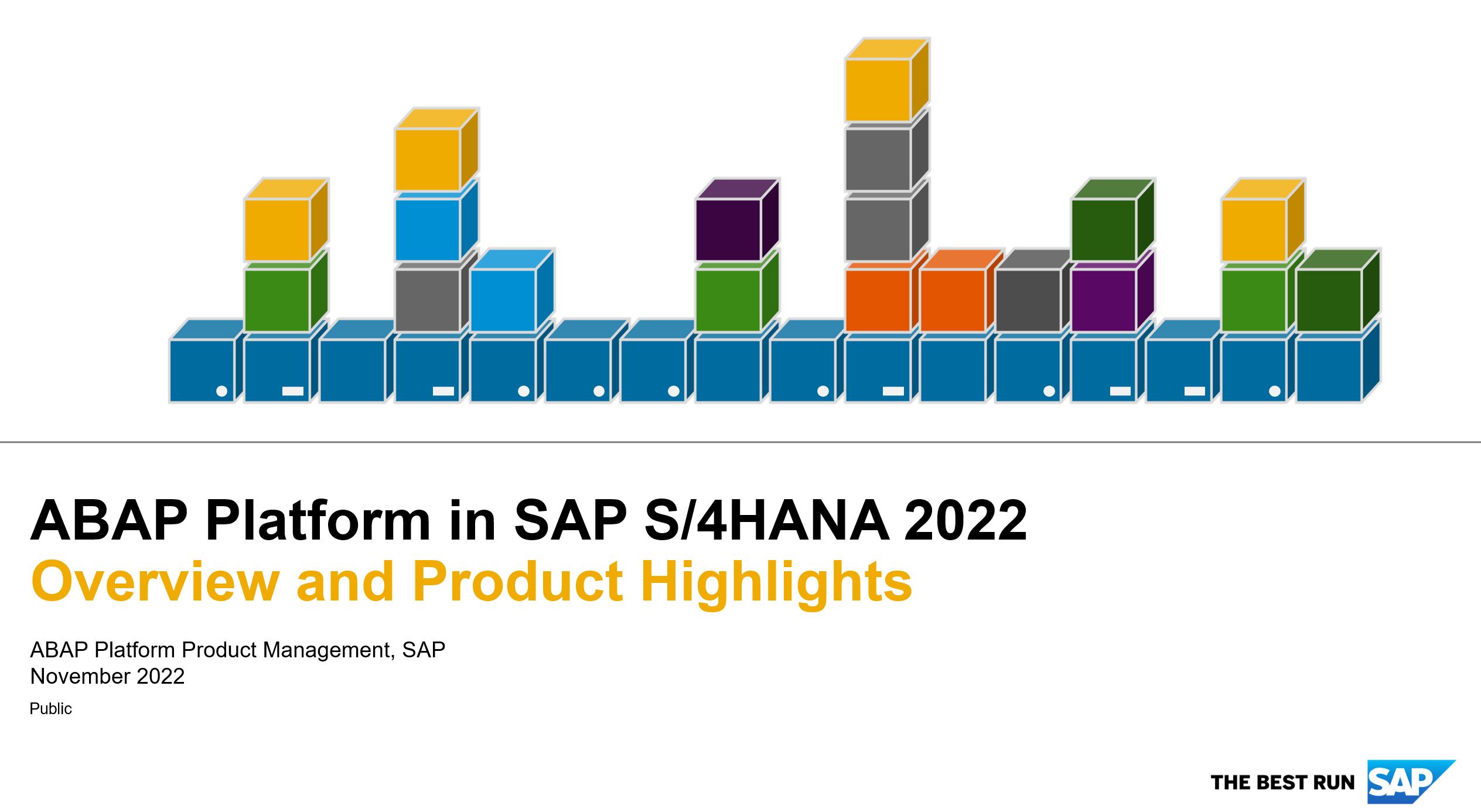 Thanks Olga for this informative blog.

Appreciate if you can share few blogs/content for ABAP platform on BTP.

I understand the approach is same but there would be some limitation compare to S/4HANA ABAP platform.

for each release of the SAP BTP ABAP Environment Florian Wahl publishes release blogs like this https://blogs.sap.com/2022/11/16/sap-btp-abap-environment-release-2211/. Just take a look. The features, which are delivered quarterly in the SAP BTP ABAP Environment releases are bundled in the yearly SAP S/4HANA on-premise release. The minor differences (for example a feature, which is only available in the cloud) are marked correspondingly in the SAP Help documentation.