My Mastodon Pack and Go Journey

Along with many others, I packed up my social media presence on the twitter sites, and unpacked in the Fediverse of Mastodon instances. The time to move was obvious for me but the path was not. Leaving behind may contacts and previous communications is like losing the text message history on your mobile device (the infamous “new phone who this?”).

I looked at a few ways to save/export contact lists and on a dive through a couple thousand I found the veritable beginning of that social media channel with seven luminaries of the SAP community space(s). Unsurprising as I started connecting there because of what James Governor shared to the TechEd communities. 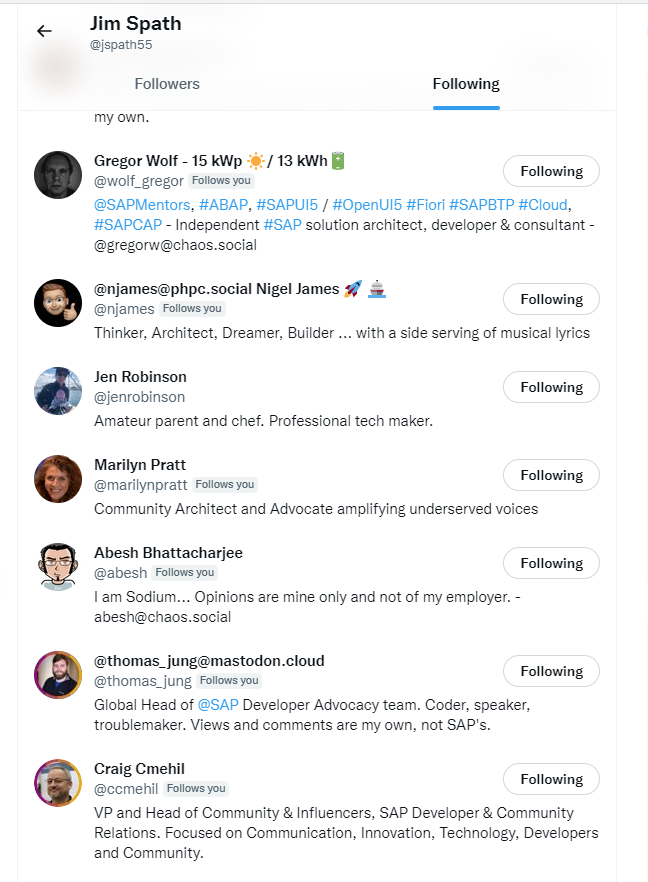 Turned out just browsing was enough to find my first hundred or so people to get started on Mastodon. I ran online scripts that found a dozen or 2 but thought I’d go another way. Online help suggested to make an official export data request through the Twitter web site. Basic steps: 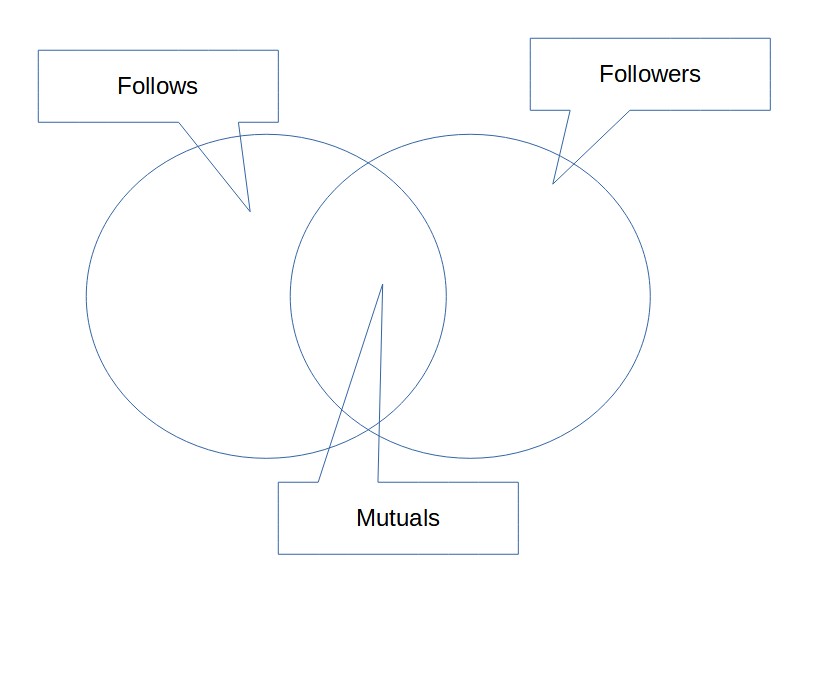 The image above of Craig Cmehil et al shows their current “screen names” which, being variable, aren’t a key identifier; the “user id” is. Converting the latter to the former works on a recent browser, though availability of any API in the future might be a problem. I found a short script that appeared to work without needing an access key, but the libraries seem to already be outdated.

Of the 7 people, 4 mention Mastodon in their visible Twitter bios when I captured the image.

My first seems to have been a mundane search for a cup of coffee:

waiting for the first cup of coffee to kick in

Inside the downloaded archive are follows and follower data streams:

My mutual count is around 800 from a total of 4000 follower+following.

Here is an example of an account I followed (local author of “The Widows of Malabar Hill”) with the saved identifier and the associated account:

On the Mastodon side

Just as the migration began in earnest, as evidenced by tracking various accounts and trending topics, those running the hosts were presented with a version upgrade. I initially saw a message about a release candidate, which is not what you’d want to pick as the stable platform for a predicted large growth (if allowed) of new users and traffic.

Hard times for some if not all system administrators as they tried to keep up with the changes. When V4.x began to be rolled out on the instance I am connected to, a few burps, lost or changed addresses, and somewhat of a user interface evolution (more on media in another post). I’m getting responses from more and more people.

I see new Mastodon instances being set up and already growing, which is testimony to the open source community roots and networks. The resiliency and stability are good indicators in my view.

Seems I’m ready for the technical challenge of an environment swap to clear the decks, though losing multiple friend voices at one time can be a daunting human experience. I can grieve the loss as we’ve done in real world health challenges along with online mental health coping.

For the near term, I’ll search on hash tags which Mastodon supplies on a web column view.

This is helpful! I’m over in Mastodon and Tribel (who knows which will be successful as twitter seems to be imploding, so I’m hedging my bets), and am glad you found me there, Jim.

It does seem like the early days of twitter (I started there in March 2007) as we were just figuring out that new tool. I hope one of them (or both, or something else) can be as engaging, informative, useful,and impactful as twitter once was.

I hope to reconnect with many of my old friends from the SAP community (SDN, SCN…) on the new platforms.

First, reviewing which of your followers "over there" have set up camp "over here" is iterative. I found 11 on a run in early November 2022, yet close to 250 today at the end of November. I expect this trend to continue. Just need a way to indicate who I've already followed to avoid wasted effort.

Next, two distinct discoveries about (1) mastodon instance switching and (2) mastodon instance scaling by Jamie Zawinski (see: jwz.org/blog/2022/11/mastodon-is-going-great/ and jwz.org/blog/2022/11/mastodon-stampede/ respectively). You can't switch instances by exporting your profile if your account is banned. Which happens; the great moderation debate rolls on. Next, the scalability of the current Mastodon software architecture is and will be tested over the next weeks as people switch their accounts and ramp up content sharing.

I've noticed occasional lags, out of synch counts, and similar cache-synching symptoms. For a technologist, seeing flames about improvement suggestions are one price of open-sourcing, Tough skins, and "that first thread is spectacular" indeed.