Today, customers expect that cloud solutions should offer continuous availability, sparing them the need to wait for planned maintenance events. They prefer that software deployments do not disrupt their businesses anymore. And this is exactly what Blue-Green deployment methodology helps SAP S/4HANA Cloud achieve.

With the current Blue-Green deployment supported updates (hotfix) and upgrades (release) for ABAP based cloud systems, SAP S/4HANA Cloud aims at 5 min or less downtime. This number is planned to be reduced further down to zero.

This blog post aims to introduce you to this blue-green deployment methodology used in SAP S/4HANA Cloud updates/upgrades and discuss what all features and functionalities are made available to users even when the update/upgrade is running. So, let’s begin!

Blue and Green simply refer to two runtimes on different versions. As shown in the below diagram, Blue is the currently active production runtime and Green is the updated/upgraded version which would eventually replace the Blue one.

As simple as that!

What it means is all the changes in an update/upgrade are deployed without interrupting the user for much duration. After carrying out most of the update/upgrade related tasks in the background, the system simply switches to the updated runtime and the updated system become available. Thus, the downtime experienced by the user, during which logging into system is not allowed, is reduced via Blue-Green deployment.

What is Downtime and Uptime?

Uptime is restrictive but unlike downtime, is not disruptive. This means that a business user is allowed to log into and perform certain functionalities even when the update/upgrade is going on in background; although with some restrictions in place (more on that in further sections).

For 2SL Production and all 3SL systems upgrades, uptime starts about 32 hours before maintenance period mentioned in 3SL Maintenance Schedule.

What does Uptime allow or restrict?

Logically, the next question to follow is – which functionalities are allowed during blue green deployment uptime, and which are blocked.

Below is the detailed information regarding availability of important functionalities during blue-green deployment uptime of a new update/upgrade based on the customer landscape: 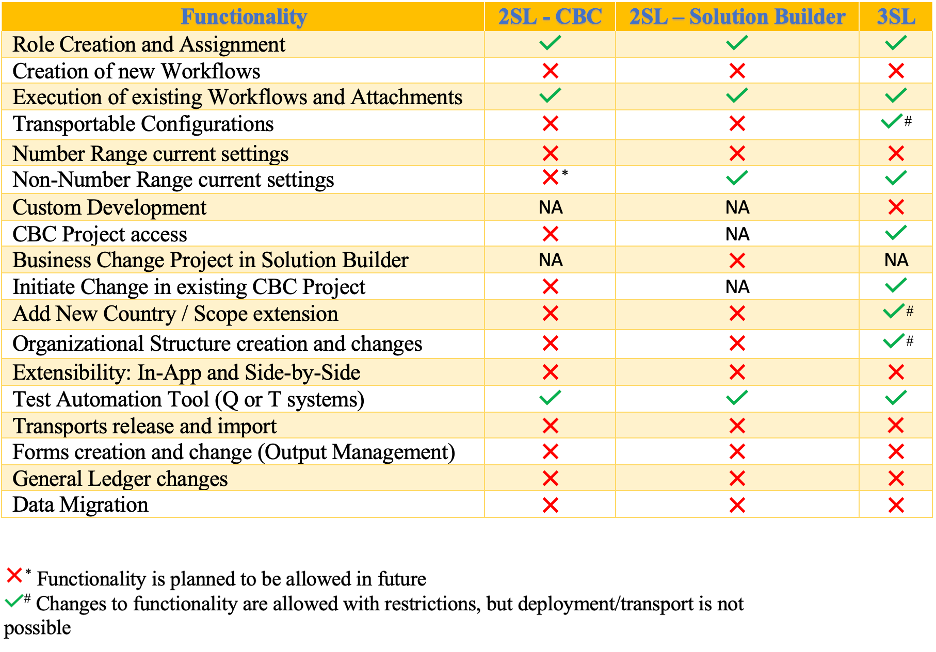 This includes creation of new workflows, and execution of existing workflows/attachment functionalities.

This refers to those configurations done via CBC Activities (or Implementation Activities app in 3SL) that can be captured in a Transport Request and pushed to further systems. This includes all configurations which are not ‘Current Settings’.

These are the number range related current settings done in the SAP S/4HANA system.

These are the current settings that are not number-ranges and cannot be captured in a transport request and need to be redone in Production System.

This refers to Custom Development that can be done in 3SL systems via ABAP Development Tool.

Creation of a new change project by initiating a change in the project.

This functionality refers to initiating a change in project to add a new country to the scope or additional scope items.

This functionality refers to initiating a change in project to create or edit the organizational structure.

This refers to any changes made to General Ledger.

Blue-Green deployment helps to safeguard SAP S/4HANA Cloud customers from business disruptions during updates/upgrades. Awareness regarding restrictions in place during Blue-Green uptime will empower customer with clarity about what activities can be continued with even during the updates/upgrades. This would further lead to an overall better experience for SAP S/4HANA Cloud customers.

Hopefully, this blog post would help you in understanding and overview of Blue-Green Deployment in context of SAP S/4HANA Cloud and how this would impact you as a user during updates and upgrades..

Below are some important links for further information regarding Blue-Green Deployment and maintenance schedules in SAP S/4HANA Cloud:

You can follow the tag SAP S/4HANA Cloud for the latest news and updates in the community.

Nice Blog. Thanks for the insights Akshay.