This blog is a follow-up to my popular blog titled What is SAP HCM for S/4HANA On-Premise (H4S4) which was published last year to give a high-level overview of the options available to customers for their HXM digital transformation.

In that blog, I introduced SAP HCM for SAP S/4HANA On-Premise (H4S4) as another variation available in Q4 2022, similar to the SAP S/4HANA Private Cloud Edition (PCE) offering, for customers who wished to extend their current investment in SAP ERP HCM.

It has been made available as scheduled, however, customers are trying to understand where the model fits in. This quick blog is an effort to explain it.

SAP has continued to emphasize that all of the exciting innovation is happening in the SAP SuccessFactors Human Experience Management (HXM) suite. SAP SuccessFactors Employee Central has crossed over 5,000 customers including more on-premise customers making the move each quarter. However, there are still customers on the journey to get there and SAP understands based upon feedback that there will be many customers who continue to operate in a hybrid environment (Cloud and on-premise deployments). These customers want their current SAP HCM investments to be protected and to have additional time for a full cloud migration which is the reason for the various options.

For customers who do not want to change their existing business processes while moving to a private cloud infrastructure, SAP S/4HANA Private Cloud Edition (PCE) is the recommended and least disruptive pathway to keep your HR, Payroll, Time and/or Benefits functionality especially as most customers are looking at moving away from on-premise deployments.

This allows a cost-effective pathway to the cloud, while retaining the functional richness of your existing systems. This option involves migrating to an SAP S/4HANA Private Cloud Edition (S/4 PCE) subscription, moving your environment to SAP’s own data center or in a hyperscalar (Azure, GCP, AWS). A conversion from on-premise SAP ERP HCM licenses to PCE cloud subscriptions is required, more info is available at Migrate your HCM on-premise to S/4HANA Private Cloud Edition (PCE).

H4S4 is not a completely new on-premise HCM solution. It’s a continuation of the existing HCM code line (In a new on-premise deployment that is part of SAP S/4HANA 2022) that has existed within ECC, and R/3 three before it, as detailed years ago in this blog: SAP Business Suite 7 Extension: What This Means for SAP ERP Human Capital Management Customers. Even though it has a new name and is commercially available, H4S4 does not represent a change in SAP SuccessFactors overall HR strategy or roadmap.

There are some delivered enhancements, primarily as a result of HANA adoption (Which are also available in SAP S/4HANA Private Cloud Edition). Here is what you need to know about H4S4. 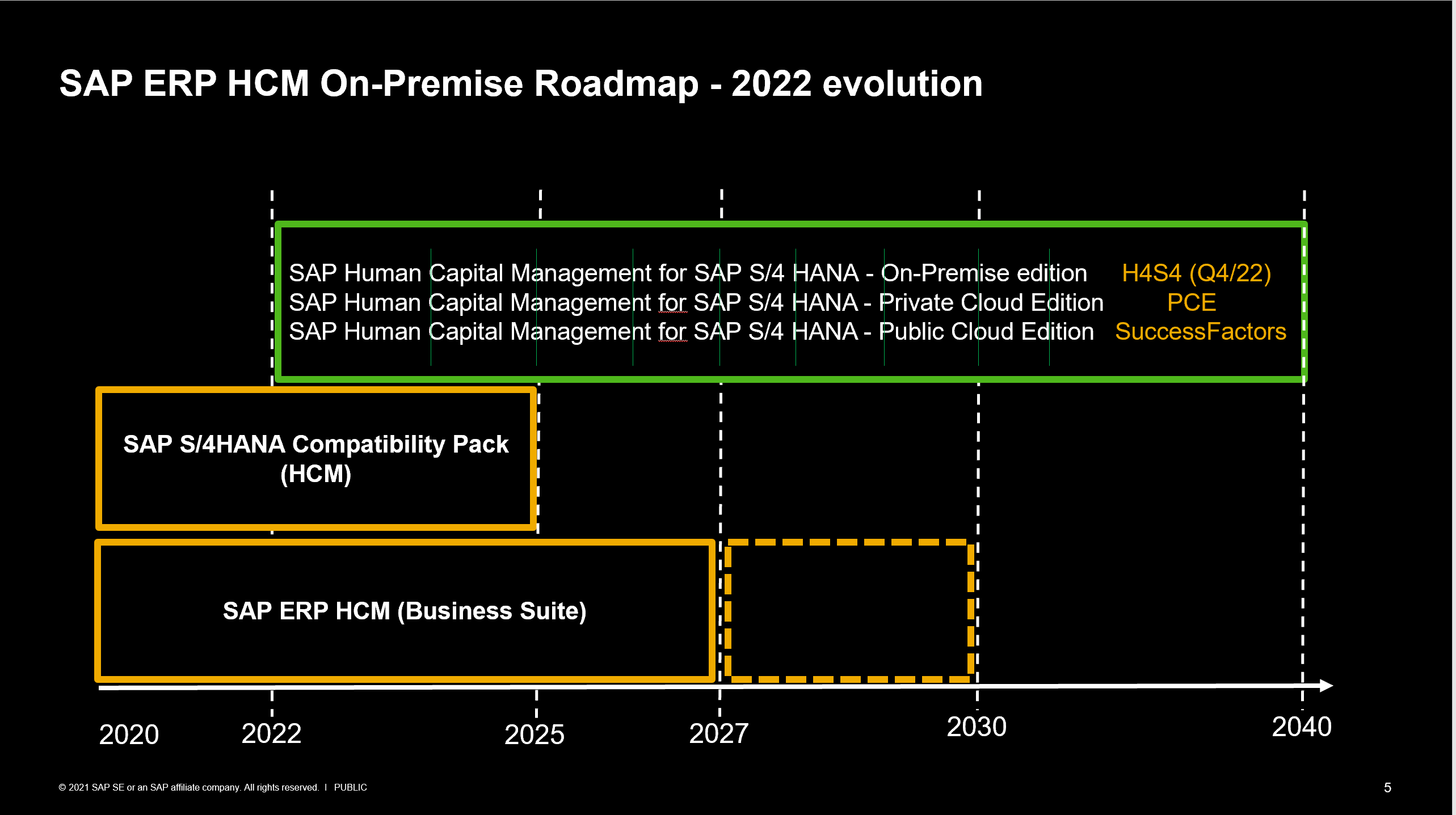 From a transition perspective, there are a couple of dates that everybody needs to keep in mind when considering what to do with their current implementations.

Net:  For PCE customers, H4S4 is basically just part of the S/4 release adoption; on-premise customers have to purchase it separately.

Note that if a customer is already running S/4 Comp Pack, the move to H4S4 will be non-disruptive; if they are moving from ECC, they will still need to adopt HANA as the DB which is a larger project.

With most CTO’s looking to move off on-premise infrastructure most customers would likely consider a move to PCE before continuing with an on-premise offering such as H4S4 especially considering they can keep their existing business processes as-is.

If customers do consider H4S4 they can run it either embedded, as a single instance or on a separate SAP S/4HANA instance which are the same setups customers have today. Customers will need to license H4S4 which will require a commercial conversion from their existing system. There are a series of new material codes that were released such as core HR, time management, and Payroll. There is also a new one for BSI if the customer wants to run U.S. payroll. There’s also ones for Learning Solution (LSO) and E-recruiting that enable on-premises customers the continuity to leverage those, as they are today.

To use the H4S4 option customers will need to update to an SAP S/4HANA environment, it is an upgrade-like conversion and there are migration tools available and for those customers running Compatibility Packs today, as it is essentially a continuation of the Compatibility Pack.

The delivery of H4S4 was shipped with the SAP S/4HANA 2022 release. Customers implementing S/4HANA 2022 who have licensed it will have access to the H4S4 solution. It gives these customers standard maintenance, until 2040.

Key important difference is in the old world, SAP sold named users. In the new world, they sell engines. The reason for that is it greatly simplifies things because they no longer have to deal with named users and a combination of the payroll engine – the real benefit of this is it sets the customer up for a much easier commercial migration and transition into SAP SuccessFactors.

This works via a one-to-one correspondence, Core HR, Time, Payroll, Learning and Recruiting over to SuccessFactors when the customers are ready. Conversion credits according to all of the standard SAP S/4HANA transition options are available as well. So the customer can take some of the licenses they’ve already been using, the maintenance they’re paying, and then they can convert those over to the H4S4 license.  Because it has to be licensed, a commercial transaction does need to be executed. There are prices associated with that, however, there are some conversion credits allowed.  Please note, in some cases, customers will likely have to pay more, especially those who are not fully licensed for self-services.  Essentially all employees who will be managed in the system will be licensed in this model.  Only the on-premise customers will have to execute a commercial transaction to get this.

There is also a Private Tailored Option (PTO) which is to accommodate for the old HEC option, those customers will not have to pay again. PTO is the successor to HEC and both PCE and PTO customers will get the H4 solution available to them as part of the subscription.

Start with an Assessment

If you are not sure which option is best for you you can start with an assessment that will provide you the intel you need to make the best decision for your unique business requirements, learn more at Get a free tool for your HCM Digital Transformation to SAP S/4HANA and/or cloud.