This blog is Vol.4 of the “Low-Code No-Code Hackathon” interview. The “Low-code No-code Hackathon for SAP Japan Partners” is a hackathon event for SAP partners (teams or individuals) to compete in the ability to solve problems and drive innovation by leveraging the features of SAP AppGyver (hereafter AppGyver) and SAP Business Technology Platform (hereafter BTP), which is an essential and hot technology area that will drive business innovation in companies in the future. Between June 13 and June 17, 2022, nearly 200 people participated in either the ‘SAP Solution Extension Division’ or the ‘Freestyle Division’ of the hackathon. Six finalists were selected to advance from among the 67 teams fielded by 40 companies.

In this paper, we spoke with JSOL Corporation, which created an application to manage food in the refrigerator and won the grand prize in the freestyle category. 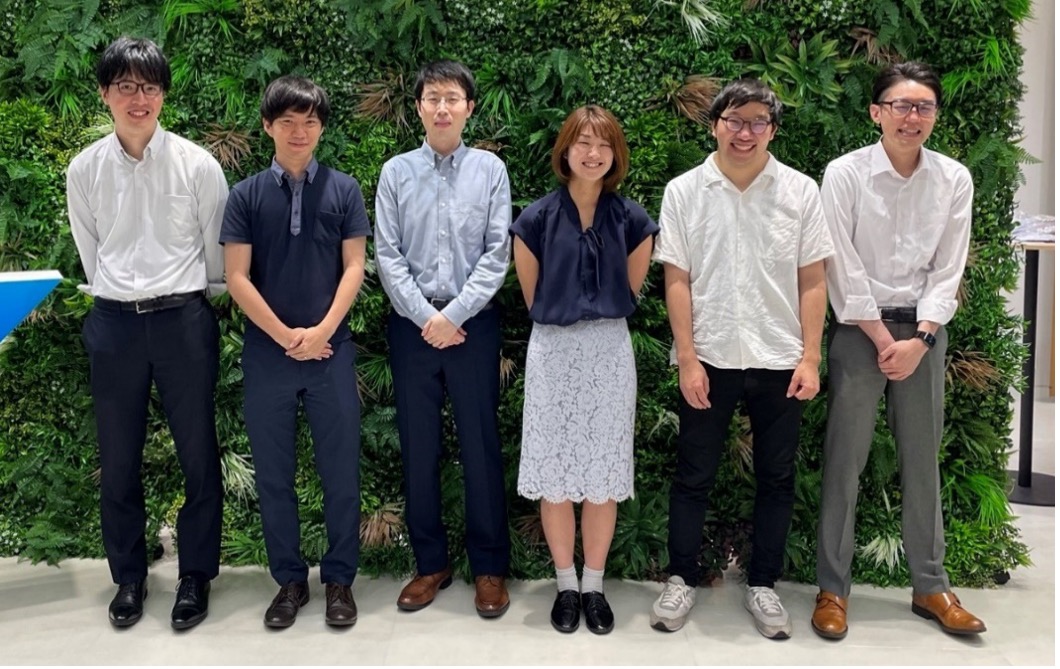 (from left to right)

Mr. Mizumoto: 9 years with JSOL. He is engaged in development utilizing SaaS products and packages. In this hackathon, he was in charge of idea generation and front-end development.

Mr. Kogure: 6th year with JSOL. He handles workflow solutions of other companies’ packages and supports their implementation. In this hackathon, he was in charge of idea generation and back-end work.

Mr. Handa: has been with JSOL for 10 years. He handles RPA solutions and workflow solutions.

Mr. Kojima: Joined JSOL six years ago and is engaged in development using SaaS products. He was in charge of front-end implementation at the hackathon.

Mr. Funado: Joined JSOL three years ago and is engaged in development using SaaS products. He was in charge of front-end implementation at the hackathon.

A total of 8 members participated in the hackathon, including Ms. Nohara (in photo), Mr. Nakamine and Mr. Egawa.

FoodNow is managed food in the refrigerator. 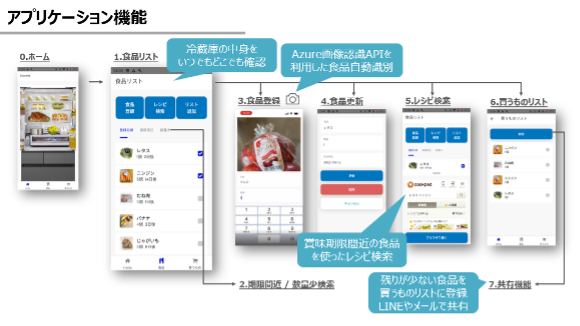 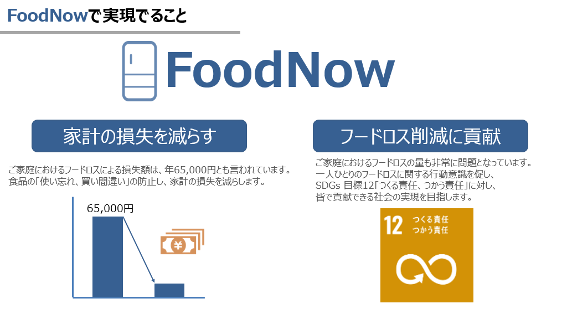 First of all, please tell us how you felt when you received the Grand Prize.

Mr. Kogure: First of all, we were simply happy. There were high expectations for us to win, but I thought it would be tough since there were 67 teams participating! But we were very happy to win in the freestyle category, and it gave us confidence to build upon. Mr. Mizumoto and I had participated in DemoJAM’s IdeaThon* three years ago, and we won that competition as well, so we are  very proud to win two awards.

What was the reaction when you told the company that you had won the Grand Prize?

Mr. Kogure: When we received the award, we did not speak to my boss immediately, but he did congratulate us  via e-mail . Later we had an opportunity to have a conversation with him , at which time he was again very complimentary and congratulatory. 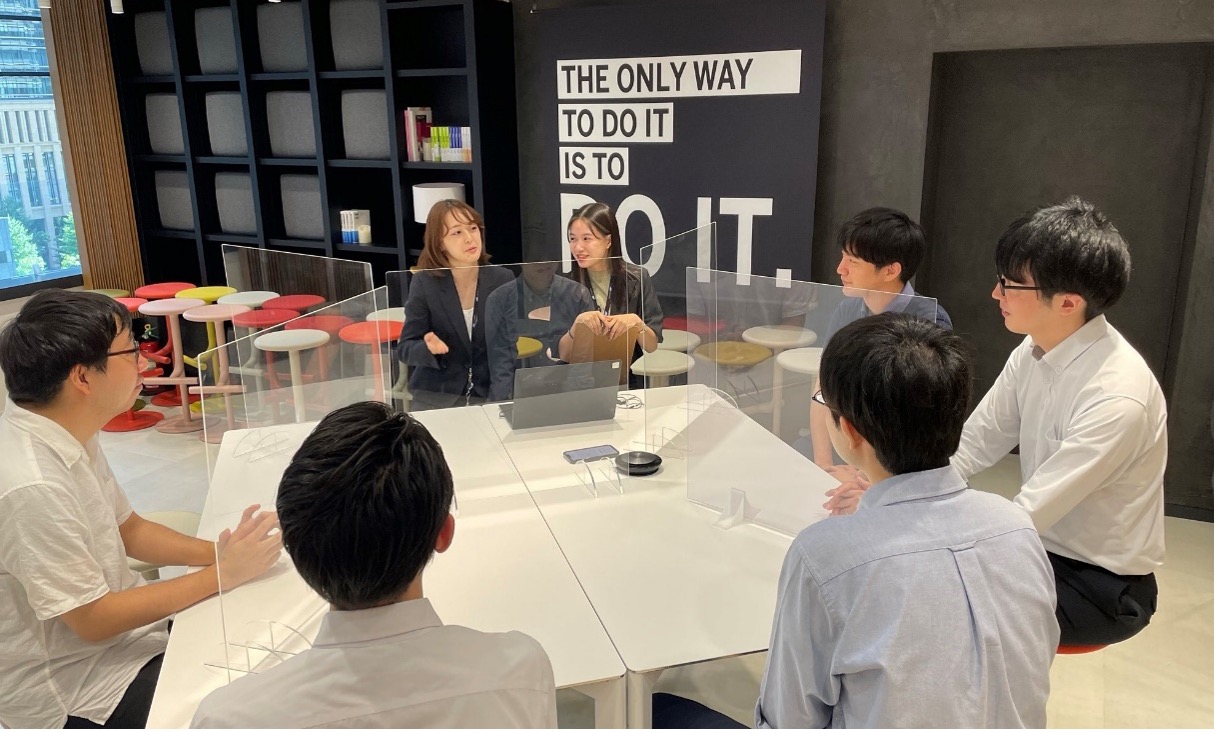 What do you think the deciding factor was for for the solution you developed winning Grand Prize?

Mr. Handa: I think that we were able to visualize the actual users. The theme was based on issues that individuals, rather than companies, are having trouble with in their personal lives, and the members were very active in coming up with ideas. AppGyver is a platform that makes it easy to realize ideas, so we were able to create a solution to the problem in a very short period of time.

As for the functionality of the tool, since all the members were new to it, we first divided up the functions of AppGyver and went through it methodically. I think it was also good that we were able to use the standard AppGyver functions that were suitable for realizing our idea.

We would like to know if there were any difficulties or stumbling blocks in the process of creating the work.

Mr. Mizumoto: But even when he actually ran into a problem, an hour later I got a call saying, “It’s solved!” Even if the problem could not be understood immediately from the reference material, we were able to recover quickly through trial and error because we had an environment where we could try things immediately.

Mr. Kogure: Next, one thing from the backend side: I felt the integration between AppGyver and BTP was a bit weak*. For example, in this case, we needed to upload the captured images to the backend, but the integration did not work, so we had to create an application on BTP to get around it.

(*This is in the enhancement roadmap, so please look forward to future improvements). 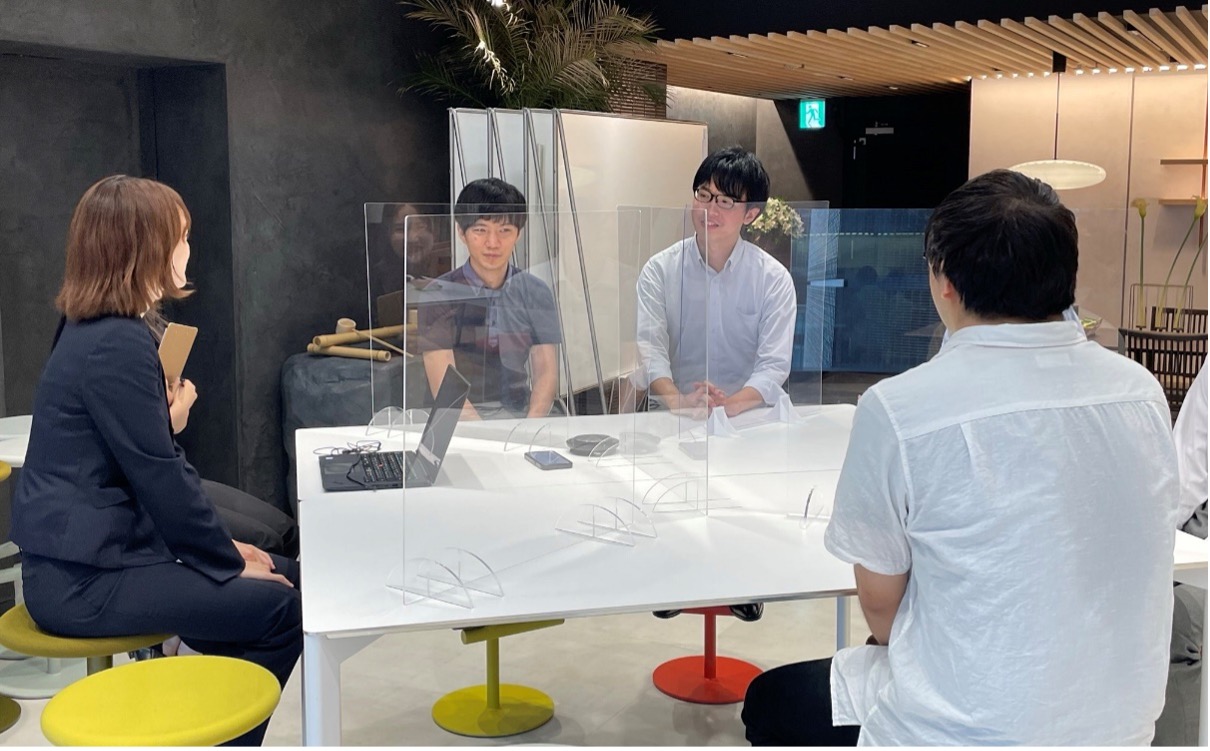 Do you have any plans to use the applications developed this time for something in the future?

Mr. Mizumoto: To be honest, we haven’t thought that far yet. I think the good thing for me personally is that despite having no experience with SAP, we could see the possibility of collaborating with our internal SAP team in the future, rather than with the application itself.

I would like to know about your process and timeline in developing your work.

Mr. Mizumoto: Since we originally had an idea for the theme, we went from consideration to development in two to three days. After the development was complete, we focused on how to make a presentation that would be understood by the audience. We spent a lot of time preparing a persuasive presentation, using concrete figures to explain why this application was necessary.

Mr. Kogure: We had done team building prior to the hackathon, and we had already decided the division of roles in advance — such as back-end, front-end, and API research — so we were able to smoothly begin discussions and development once the hackathon actually started.

What are your thoughts on using AppGyver in your development?

Mr. Funato: We had a hard time figuring out what each standard function could and could not do. I spent nearly half a day on the hardest one.

Mr. Kojima: I had a similar impression, and it was difficult to get used to the unique way of holding variables in AppGyver. However, I thought it was good that the screen designs could be realized immediately by simply placing a component on it, and that the style could be easily changed. 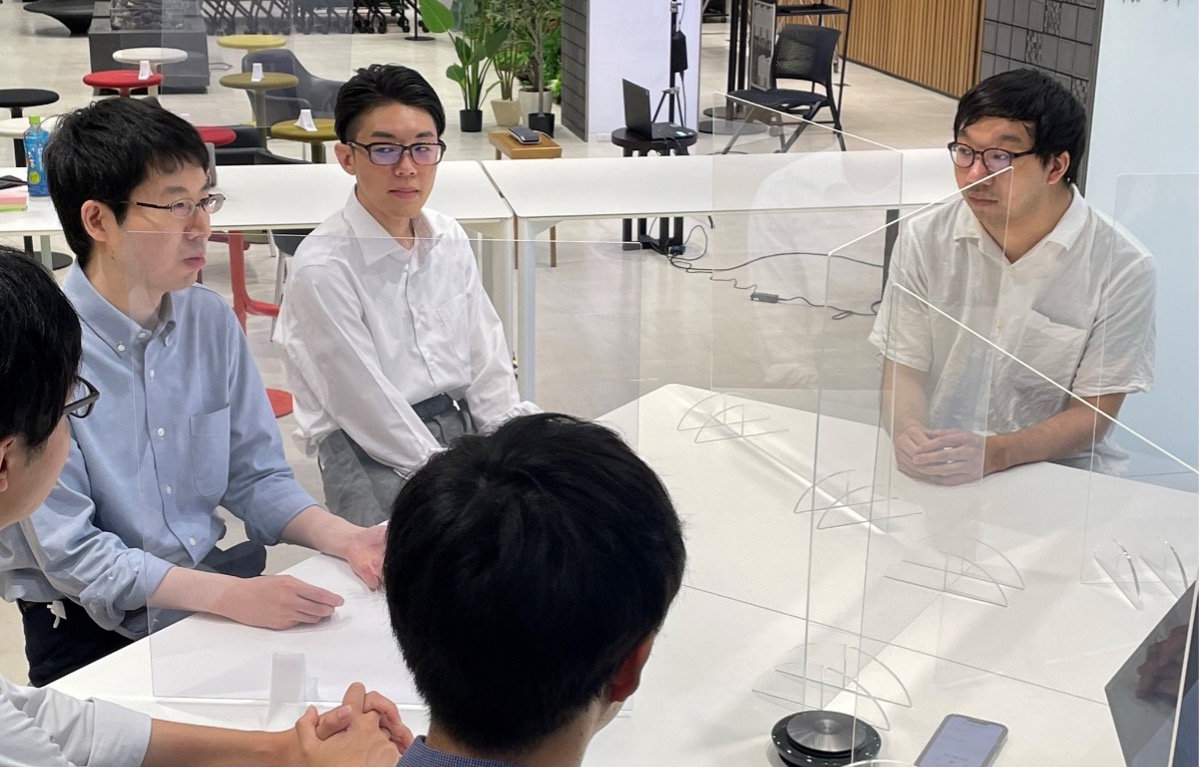 Mr. Kogure: Winning first prize was a positive because we were able to show that our company’s strength is not only ERP implementation, but also the capability to use new SAP technologies such as BTP and AppGyver well. It was also stimulating to see the various ideas of the participants throughout the event.

Mr. Funato: I had only experienced one other no-code platform, so I am very glad that I was able to experience AppGyver this time. Also, the fact that we were able to develop an app in such a short period of time, just a couple of days, gave me a lot of self-confidence.

Mr. Mizumoto: I am personally happy to have won two awards at SAP events, and it was also good for the company to be able to show that we can utilize  BTP and AppGyver as well. 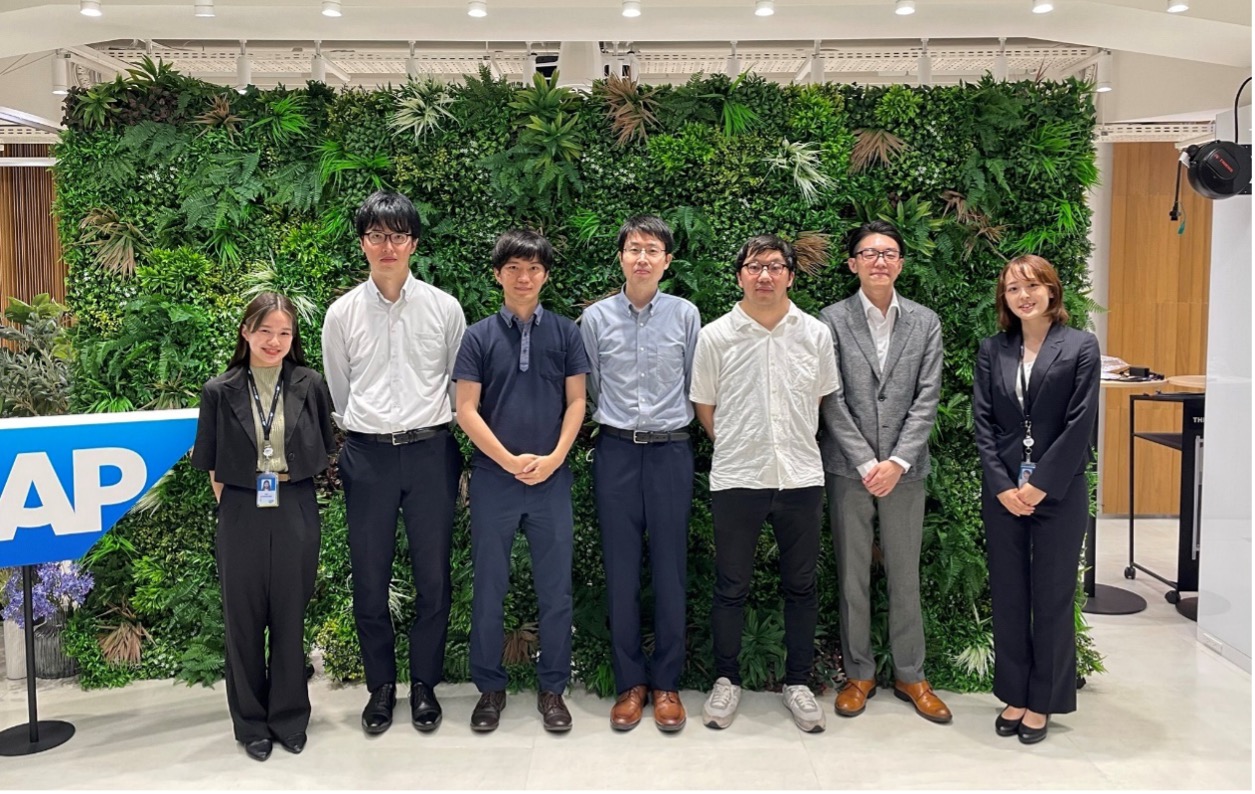 We were impressed by the great teamwork of the members, whose ideas and team management skills have won SAP events in the past, combined with the technical skills and support of other colleagues, led to the development of a well-realized, compelling  solution, and a win in the hackathon freestyle division.
We could feel the power of AppGyver that enables the creation of impressive applications  in just three days. This interview gave us a glimpse into the future of AppGyver, which will become even easier to use and enable the development of more complex applications soon.