Earlier this week, I posted on the spinning up of Mastodon as the Twitter platform spirals down. People shared several interesting perspectives so far; one that caught my eye concerned accessibility (by SAP’s Lee Barnard ).

… features like alt texts for images, subtitles for videos – assuming that Mastodon would support these important accessibility features.

For clarity, “second thoughts” in the title means more thoughts, not the idea of stopping the migration. Both Twitter and Mastodon allow for “alt text” in images yet neither enforces them. 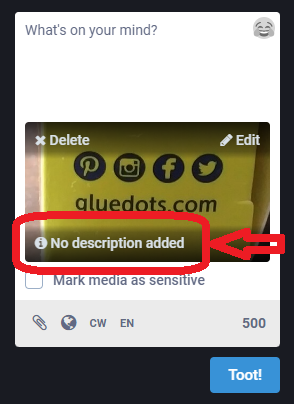 Screenshot of ~No description added~ on image upload.

The Mastodon platform I’ve joined has an option for “detect text from picture,” which the other does not. 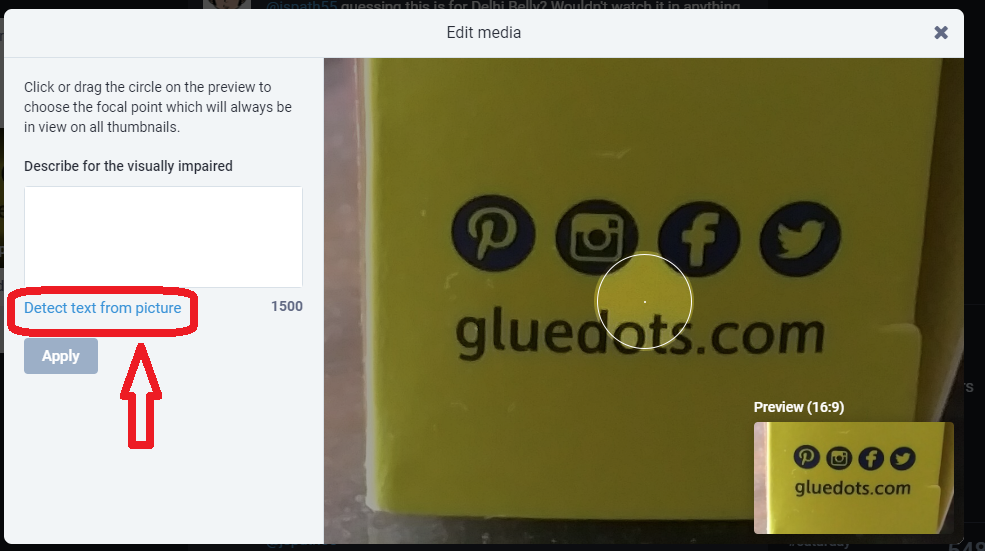 On my first test, though, no results came back in a short time. So I decided to test a bit more, and waited. 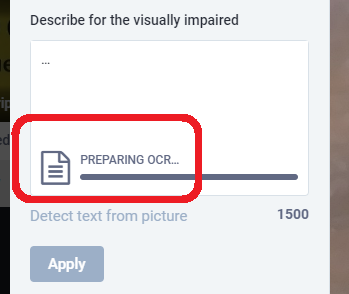 Ten minutes went by, then 20, then after around 30 minutes I closed the pop-up window. Having installed and run open source OCR (optical character recognition) code, I understood the CPU cycles might be significant. I guess I expected a timeout warning or other error message that would show some user feedback.

Then, I started searching for bug reports and found several with the same pattern:

This leaves us with the good news/bad news “it depends” scenario where the code is open source, and anyone (within reason) can contribute to the fix. But during a great migration time, when many users are joining, servers become overloaded, administrators struggle to keep up with maintenance, and I doubt those running sites want to play with new features or fix old obscure bugs.

The administrators of the site I’m on said, “To resolve the many question when we will upgrade to chaos.social to mastodon v4: Not before there is a stable release for v4.” [link]

From one of the “find your followers” scripts produced to ease the migration I see a few sites on a 4.x “release candidate”. Good for them; hope it stays well.

Slight post-release edit, as I saw this reply to a well-known person, who didn’t put alt-text in an image:

any chance you can post a description of the text in the image?

Back to the general accessibility topic; what does Mastodon offer now, and what is coming; is it better than other sites?

Thanks for pointing out a very important USP.

Accessibility first, because everyone has different challenges. And accessibility creates an inclusive environment where everyone can have a seat at the (discussion) table.

I appreciate your comment, and perspective. Small question, does "USP" stand for "unique selling proposition," or something else perhaps? I am unfamiliar with the acronym. Thanks!

USP = "unique selling position" maybe? In the context of needing to convince someone to invest in the solution.

Jim Spath Thanks for highlighting this topic. Do you have any insights into my other example, the captioning of videos? Does Mastodon have any checks or prompts regarding the accessibility of such content? I really need to try it out.