Streamline the creation of Production Versions

In the 2208 release of SAP S/4HANA Cloud 2208, a new Application has been introduced with the Production Engineers in mind, which will surely provide them with productivity gains and enhance their workflow with system proposals in the area of production version maintenance (co-incidentally, this app is now also available in SAP S/4HANA 2022).

Indeed, as we all know, once you have created a material that you wish to manufacture, you then, of course, have to create the corresponding routing and Bill Of Materials (BOM). But, to then be able to use this data in a production/process order, you need to create a production version.

Up until now, to create this production version you would have used the app ‘Manage Production Version (C223)’ or directly maintained it in the Material Master app.

To illustrate a use case for this new application, we have already created a new material (code PR126-PV), as well as a routing and bill of material for it. 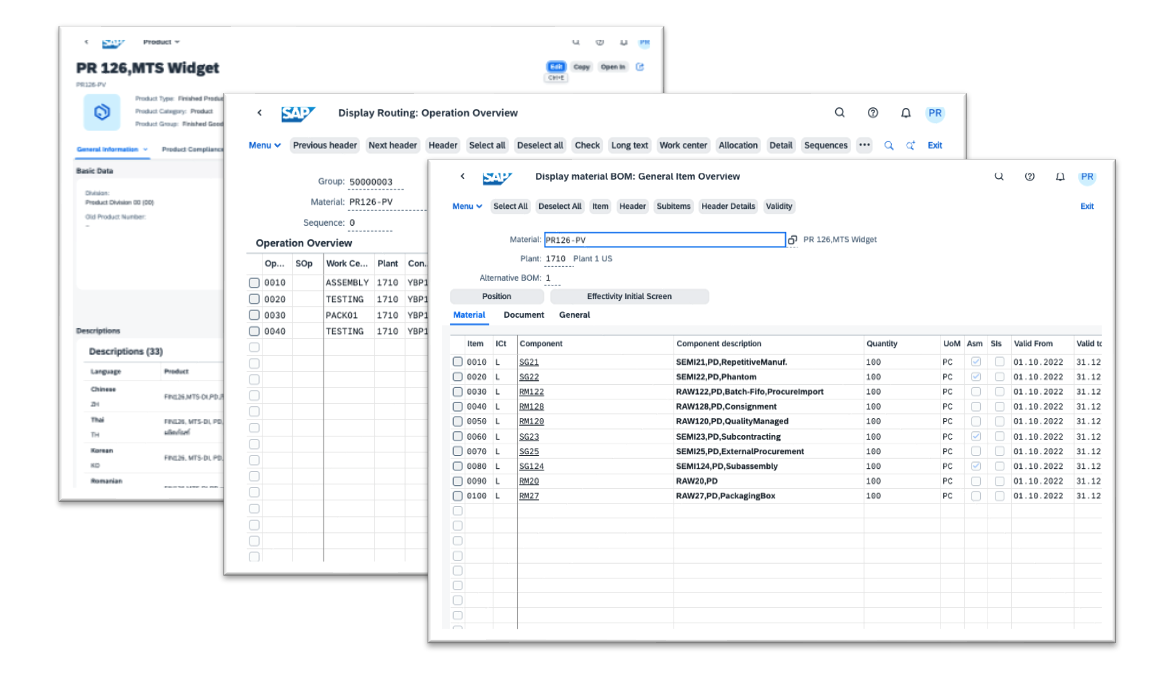 A product, routing, and BOM have been created.

We now go to the new app ‘Process Production Version’. You can restrict the data that will be proposed, using the provided filters, maybe based on your area of responsibility. In my case, I will only enter plant ‘1710’ – the plant where I have created my master data.

Upon entering, I see that the creation of a production version is proposed for creation, for my product.

You can directly choose to accept or reject the proposals. This action can be done one by one or ‘en masse’ if you had multiple proposals to process. You can also change the order and the fields presented to help you make this decision.

In our case, it might be sufficient to see the Task List Group and Alternative BOM number indicated to make this decision.

You can also actually, click on the line in order to navigate to the details of this entry, to either verify further data or maybe even, modify it. We’ll click on it and modify some data. 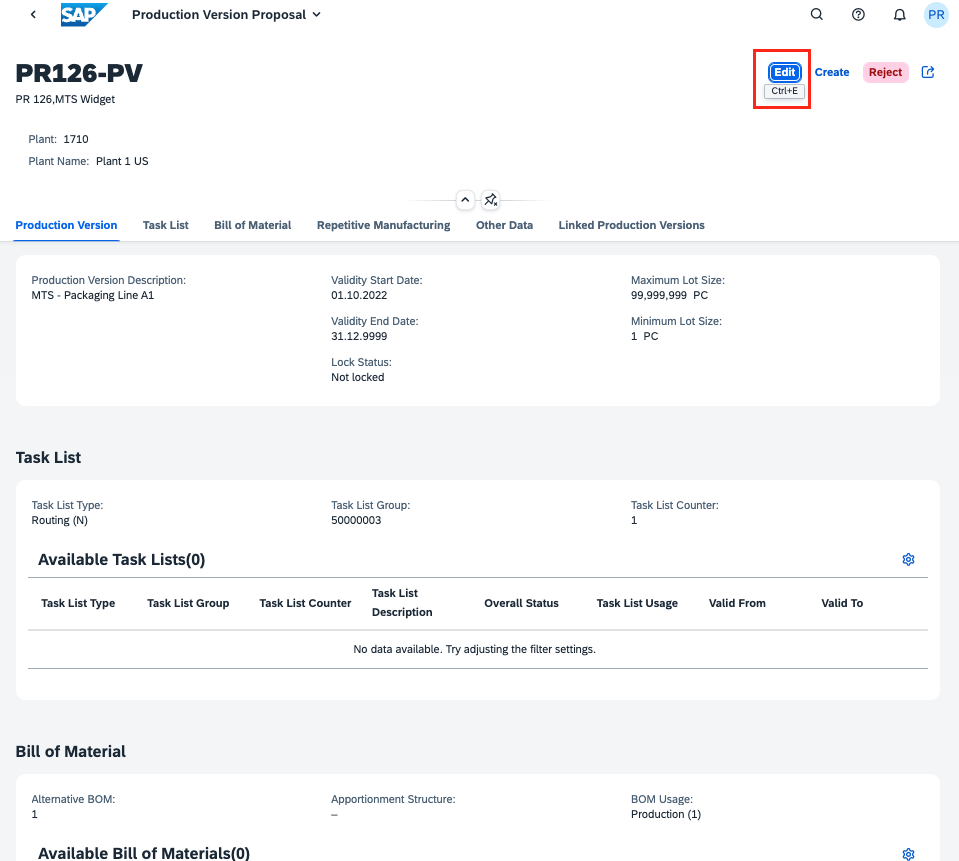 You can Edit data to suit your creation requirements

Once again, we find here the familiar ‘Create’ or ‘Reject’ buttons, but we also see, as indicated an ‘Edit’ Button, that is going to allow us to change some data. We will change the Validity Start Date, from 01.10.2022, to say the 17.10.2022, and once we are happy with this change, we will click on the ‘Create’ button, so as to create the production version.

Some data can be changed – in Edit mode

Also note that other information can also be edited, before creating the production version (as highlighted below). 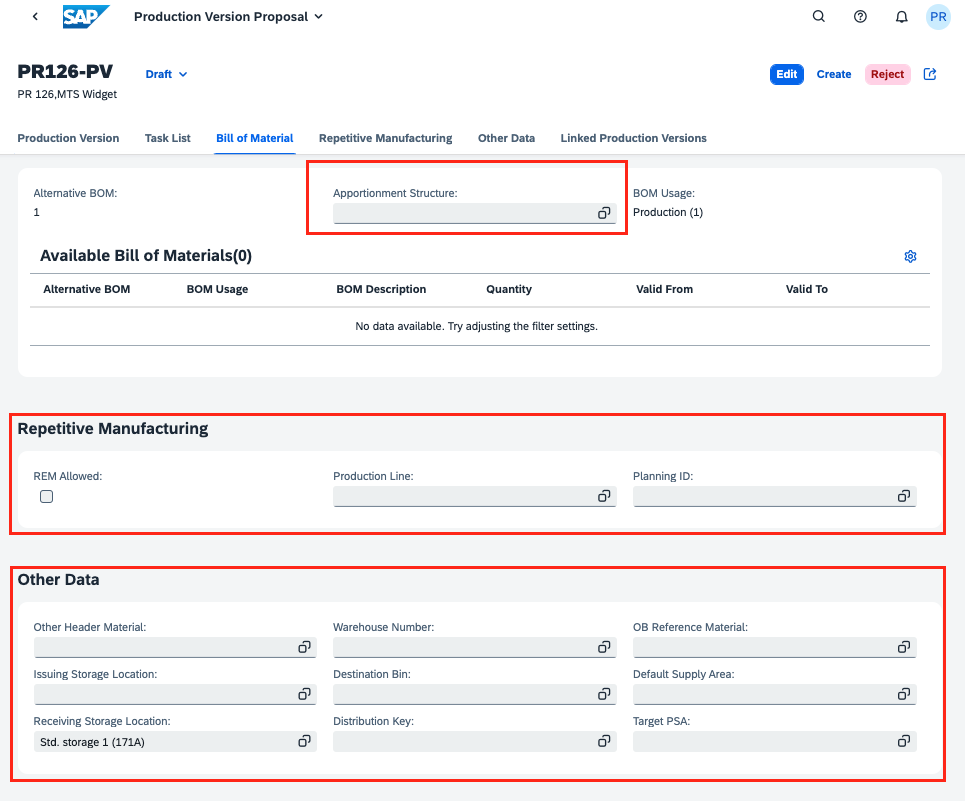 Amend data before proceeding with the production version creation

Once we click ‘Create’ a pop is presented to confirm the requested action.

Once you have made a decision, regarding the Approval (creation) or Rejected the proposal, it will disappear from the proposal worklist, and move to the existing production version worklist (if you approved it !)

Your decision will influence the content of the worklists

You can also use the ‘Existing Production Versions’ worklist to edit a single entry at a time or,  ‘en masse’ Lock, Unlock, Check or Delete production versions.

Changes to existing production versions are also possible with this app

Influence of the app behavior

I would be remiss if I did not also bring your attention to the self-service configuration entry named ‘ Define Rules for Production Version Proposals’ which will offer you some settings that can influence the behavior of the app. Namely, settings pertaining to the naming, validity (date and lot size), and storage locations…. Or disabling the production version proposals altogether!

I hope this blog has helped you understand how this new application works and brings productivity gains to your workflow.