How to use Embedded Steampunk in SAP S/4HANA Cloud, private edition and in on-premise – The new ABAP extensibility guide

Since October 12, the new SAP S/4HANA 2022 release is available for SAP S/4HANA Cloud, private edition and for on-premise customers. With this release SAP provides the first version of the ABAP cloud development model (Embedded Steampunk*) in these SAP S/4HANA editions.

This is a big step forward because now we have the modern, upgrade-stable, and cloud-ready ABAP cloud development model available in all major ABAP environments:

* Steampunk and Embedded Steampunk are the SAP internal project names to deliver the ABAP environment on SAP BTP and in SAP S/4HANA Cloud. These project names are often used in development-related blogs and articles.

This means we have now ONE common ABAP cloud development model available in all these environments. In the public cloud, SAP runs automated software updates and ABAP cloud development is the only supported ABAP variant. In the private cloud and in on-premise, ABAP cloud is a new option to reduce upgrade efforts and to make it easier to reach a clean core for extensions which must run on the SAP S/4HANA stack.

Additionally, we created a SAP community landing page which you can use to get more information and to discuss all ABAP cloud or Embedded Steampunk topics: https://community.sap.com/topics/s4hana-cloud-abap-environment

In this blog I  focus on the ABAP cloud development model (Embedded Steampunk) in the new SAP S/4HANA 2022 release.

I try to answer some typical questions we received from private cloud and on-premise customers.

With the SAP S/4HANA 2022 release and the first version of Embedded Steampunk the same cloud extensibility model can now be reused in the SAP S/4HANA Cloud, private edition and on-premise.

But it cannot be expected that private cloud or on-premise customers switch completely to this pure cloud extensibility model overnight.

The main reasons are:

Therefore, a feasible compromise is needed which can be executed in a given private cloud or on-premise environment. The fundamental principle is that ABAP cloud and ABAP classic code can coexist since the ABAP language version is defined on ABAP object level. This offers a gradual transition from the classic to the cloud extensibility model.
SAP recommends the following 3-tier extensibility model to transform step by step to a clean core in SAP S/4HANA Cloud, private edition and in on-premise. 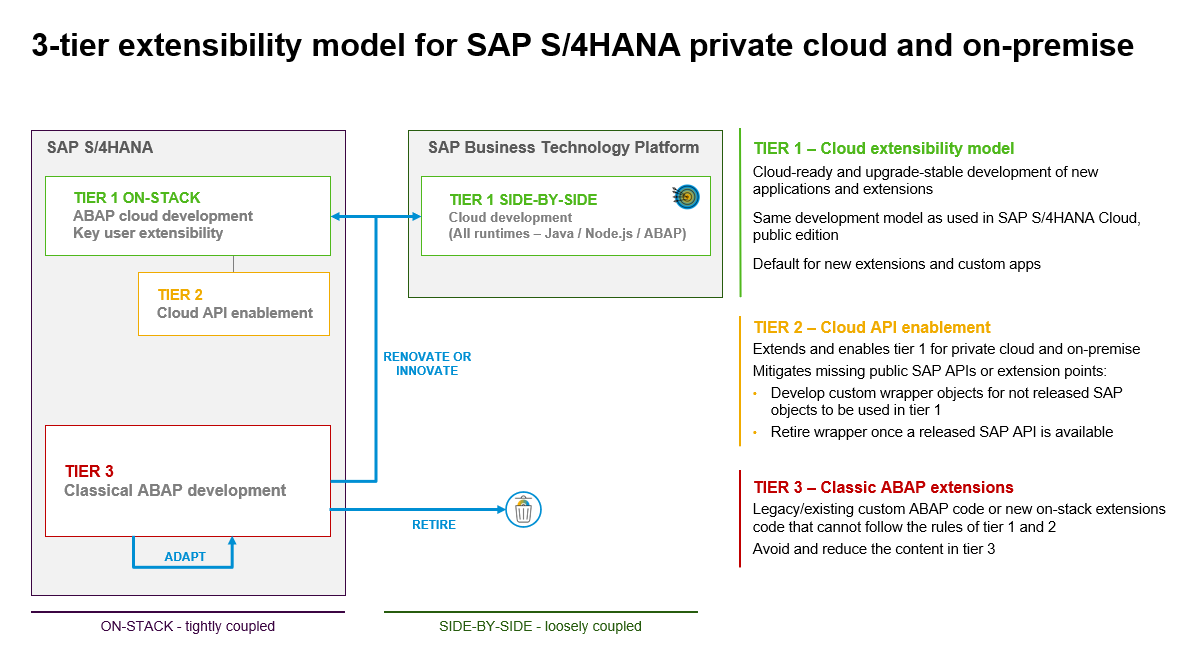 I am sure now I have your attention if you want to reach a clean core.

Therefore, I stop here and recommend you to directly switch to our brand new ABAP extensibility guide which explains in detail how this 3-tier extensibility model works.

This guide has been compiled by SAP internally with many SAP experts and includes partner and customer feedback. But the ABAP cloud topic and especially the 3-tier extensibility model are very new topics. We plan to continuously update the guide to add new best practices which we collect in the upcoming customer projects. Please use our community to share your thoughts or questions about the guide.

Great blog, thanks for sharing!

Thanks for the great BLOG.

As far as I understand the Embedded steampunk is now given to the S/4HANA on-premise and private cloud customers, so they can use is, but the scope is limited comparing to the S/4HANA public cloud?

Thanks Boris for providing the bigger picture

Thanks Boris for the Guide and explaining the extensibility in a Holistic way.

Thanks for this great blog.

after reading and thinking what that means for all the activity I have on my bucket list the idea came up, what if there was an repository, which includes the mentioned wrapper classes for the missing API's.

That could be a project, where all can participate and submit the done wrappers, so there is no need to do it twice...

also I think a delivered wrapper class could help a lot customers and partners to really prepare the systems the way it is mentioned.

As there is already an SAP-GIt with a lots of examples and adaptable stuff available, maybe this could be a great addition.

Also a searchable list which API's are available and a linkin to the wrapper class (for the older releases) could be a huge help to get this done.

Thanks a lot for investing time to evaluate how we can ease the transition to the described 3-tier extensibility model!

Your idea to provide a “reuse-wrapper-repository” is appealing – especially for more complex wrappers which e.g., combine several services.

For easy wrappers (e.g., a 1:1 wrapper for a function module) we think about ADT tool support to directly generate the wrapper code – comparable to the proxy generation for RFC modules or OData services Generating Proxies for Remote Function Call (RFC) | SAP Help Portal.

thanks for this great blog. 1 question which just popped-up at a customer:

You're writing that Embedded Steampunk is available in SAP S/4HANA Cloud, private edition since Oct 12. What's about S/4HANA Cloud with a different cloud contract as STE or Cloud Extended? Is there a technical restriction for which Embedded Steampunk cannot be used under such a cloud contract or is this caused by circumstance that the 2022 release for STE/EX happens in March 2023 with FPS01 (means would be available as well even with SP00).

The ABAP cloud development model (Embedded Steampunk) can be used in these SAP S/4HANA variants as well. (Starting with the SAP S/4HANA 2022 release).