I will outline the motivation for the delivery, the use cases addressed by Universal Parallel Accounting and discuss how you can judge the impact on your SAP S/4HANA implementation.

Parallel Accounting has been supported by SAP for some time, initially using parallel accounts and later using parallel ledgers. It allowed customers to fulfill their reporting requirements according to different GAAPs. In addition, SAP provided the option to add parallel “management” valuations represented by additional currency types to distinguish a legal valuation from a group valuation. However, these solutions had some shortcomings since currencies and ledgers were not consistently supported across the different subledgers (specifically Material Ledger, Controlling and Asset Accounting). This led to additional period-end closing activities to adjust the local GAAP values, complex configuration, and cumbersome filtering of values in reporting, since the additional currency types were part of the leading ledger.

Universal Parallel Accounting provides a harmonized architecture for ledgers and currencies. This provides a foundation for not only calculating and posting values per ledger and currency along end-to-end processes, but also the baseline for future innovations in the area of Finance such as Value Chain Analysis and Transactional Carbon Accounting.

Let’s take a closer look at the use cases currently covered by Universal Parallel Accounting.

Support of parallel legal valuations means consistent calculation and posting of values for legal ledgers, e.g. Group GAAP and Local GAAP. This worked already before Universal Parallel Accounting in some processes, e.g. depreciation or Universal Allocation, but not in many of the Management Accounting processes. During distribution, assessment and settlement, the values in the leading ledger values were posted in all ledgers, meaning that the sender values were not cleared properly in the second GAAP. This “shortcut” led to issues in processes like asset capitalization according to different GAAPs or when companies require to perform actual costing according to parallel GAAPs. This is solved now with Universal Parallel Accounting where we support settlement per ledger and – optionally – ledger-specific settlement rules, as shown in Figure 1. For a more detailed description of the changes in the area of Overhead Accounting, please refer to the blog focusing on Overhead Accounting in the context of Universal Parallel Accounting by Janet Salmon. 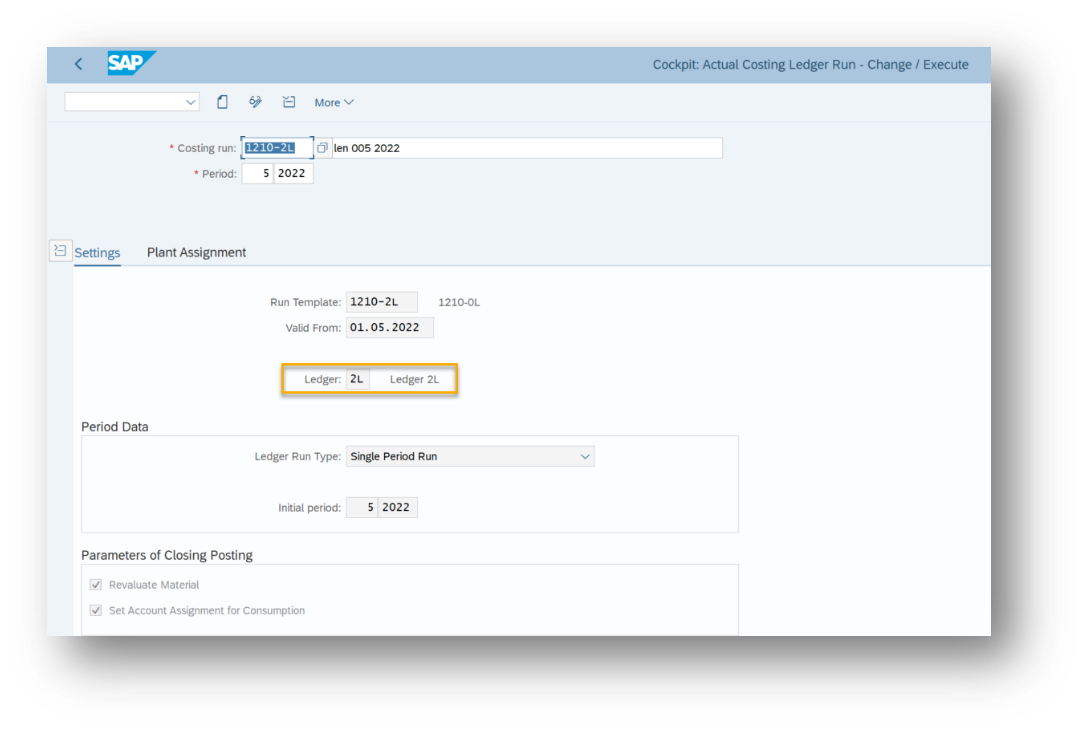 In addition to the parallel legal valuations, Group Valuation is supported with Universal Parallel Accounting. In comparison to the existing Group Valuation solution, it is now included in a separate single valuation ledger which allows for simplified reporting and separate closing of this ledger, if required. In addition, it is based on the Advanced Intercompany Sales & Stock Transfer processes and provides an enhanced posting logic. In the new Group Valuation ledger intercompany profits are eliminated in real-time.

The topic of ledgers is tightly connected to currencies – which are another dimension which is crucial for financial reporting. Before Universal Parallel Accounting, ten currencies were supported in the Universal Journal, however, Controlling processes where “only” able to calculate in object and Controlling Area currency, Material Ledger could deal with a maximum of three material ledger currencies and Asset Accounting was tied to the three FI integrated (“BSEG”) currencies. If additional currencies were active in the ledger these were calculated at current exchange rate at the time of the posting which led to often undesired currency effects in secondary processes such as depreciation or settlement – see notes 2894297 and 2344012.

To sum it up, Universal Parallel Accounting is solving many pain points companies had in the past providing an optimized support of ledgers and currencies along end-to-end processes.

What does this mean for you?

With Universal Parallel Accounting legal as well as management valuation ledgers and up to ten currencies are supported along end-to-end processes resolving many restrictions of the past, improving steering effectiveness and providing simplified configuration and processes. It will be the foundation for additional innovations in the future.

For more information on Universal Parallel Accounting, check out the following links: