Today customers steer their value chain with high effort, inconsistencies and often inaccurately and after the fact has been Going forward, we want our customers to be able to steer their entire material and activity value flows in a real time, automated and consistently instantly at various levels for the legal entities, business units and Group. 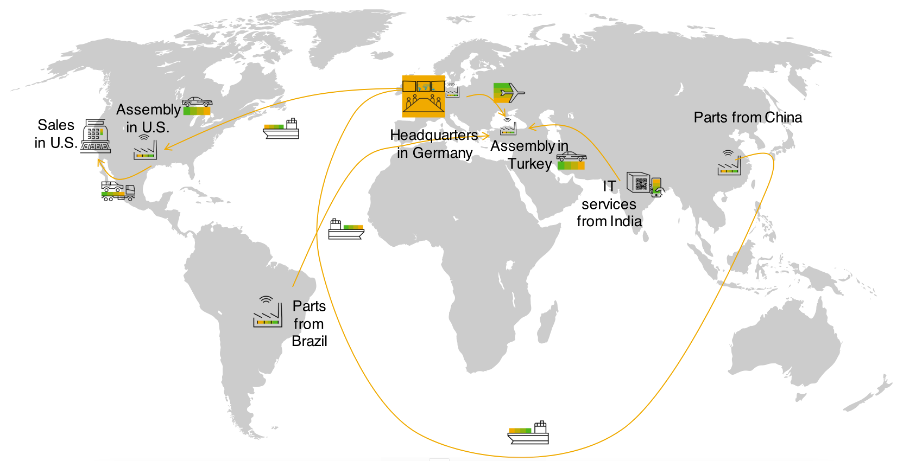 A global value chain , it could be an intercompany stock transfer between Brazil and Germany, Intercompany Sales between Germany and US, Services Cost for IT Services from India and so on.

What Corporate Controllers struggle today is to have a consistent and uniform view of Group Margin and Cost of Goods Sold. It is not just about financials which needs to be right, but in the logistics processes today to get a full visibility into value chains by recording all material and activity flows. We have to fill the process breaks in existing processes such as Intercompany Sales Processes, Intercompany Stock Transfer, Drop Shipment Process, Customer and Supplier Consignment Process, Customer and Supplier Consignment Process, Returns Handling and what not.

How do we build this information, well we use an extended version of material ledger by collecting costs (“value added”) at each step of the operational logistics processes including the cost component split. What you see below is the intended value flows from a group perspective: 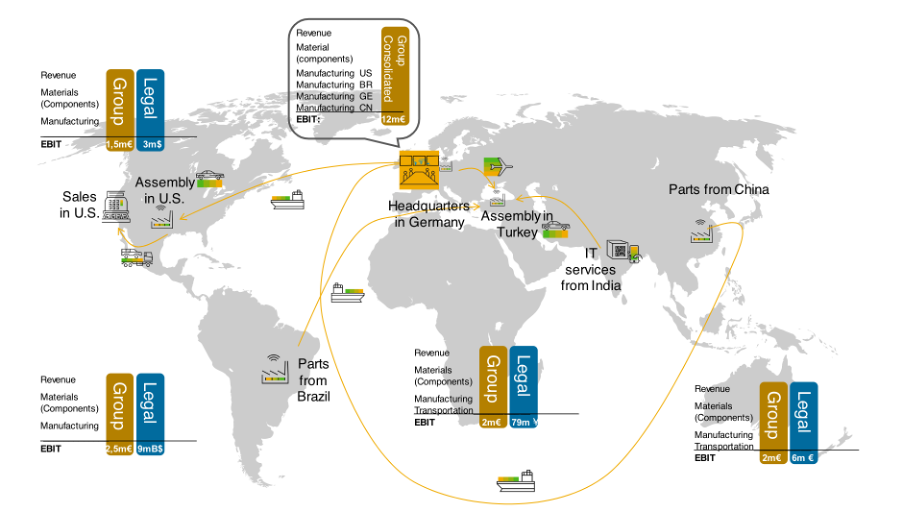 In addition to filling in process breaks existing today, we need to have additional spend vectors, especially from a parallel valuation perspective like a Group View or a legal view. Since we are able to record the material flows at each step of the chain, we would also be able to provide the background for recording additional KPIs like CO2 emissions at step of the chain. 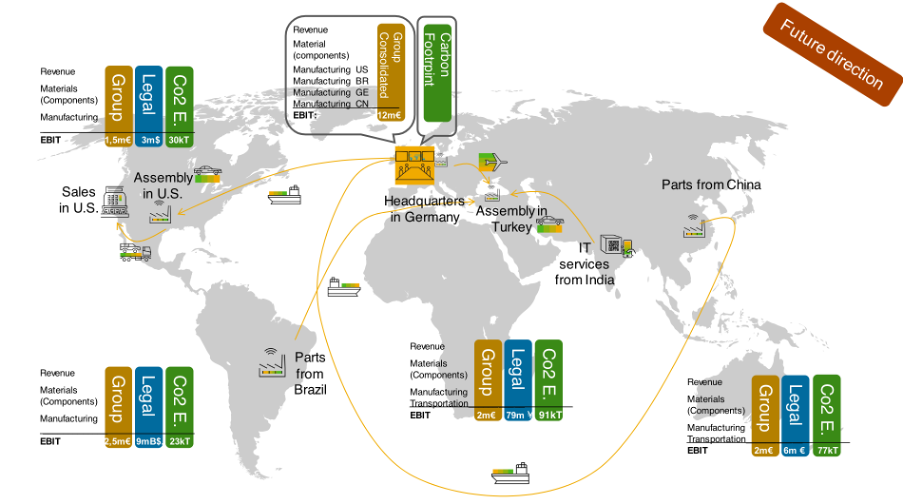 Now let us look at one of the use cases, where we are removing the process breaks in Operational Logistics Processes of Intercompany Sales Process, which is being introduced as Advanced Intercompany Sales Process. I would try to highlight what changes with the new process and how we use Group Valuation built on Universal Parallel Accounting to capture Group Margins and COGS at each step of the process.

In this case, there is a Belgian Company selling to a customer in US, but the delivery of the goods is from a delivering company in UK. Our existing process for Classical Intercompany Sale in this case was very slim, very adaptive, but has lot of downsides:

The scenario remains pretty much the same. However, what changes now is: 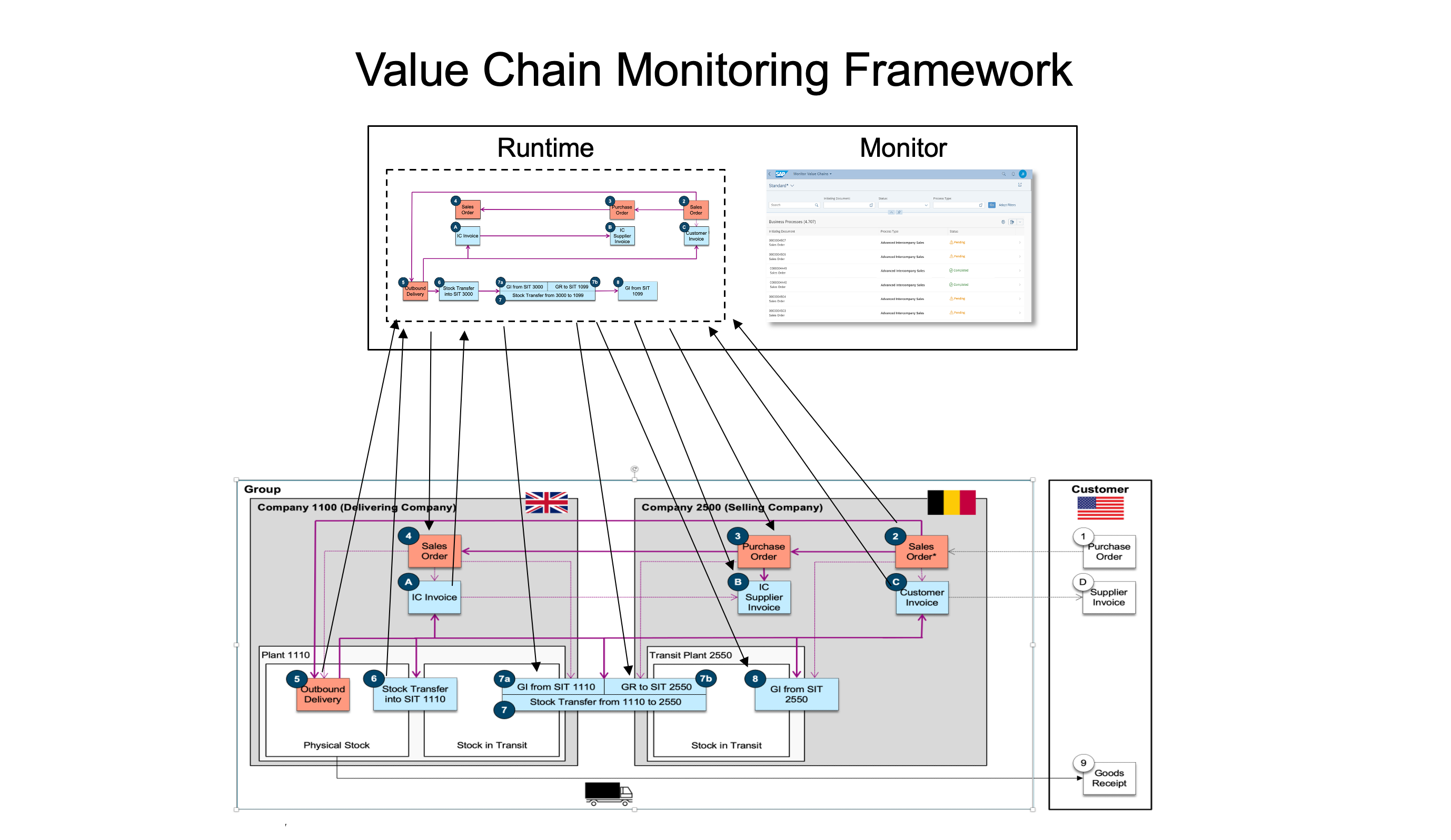 The Sales Order in selling company for external customer determines if the goods will be delivered from an Intercompany location and it would trigger the subsequent processes. A simple view of an Advanced Intercompany Process in Value Chain Monitor would look as below: 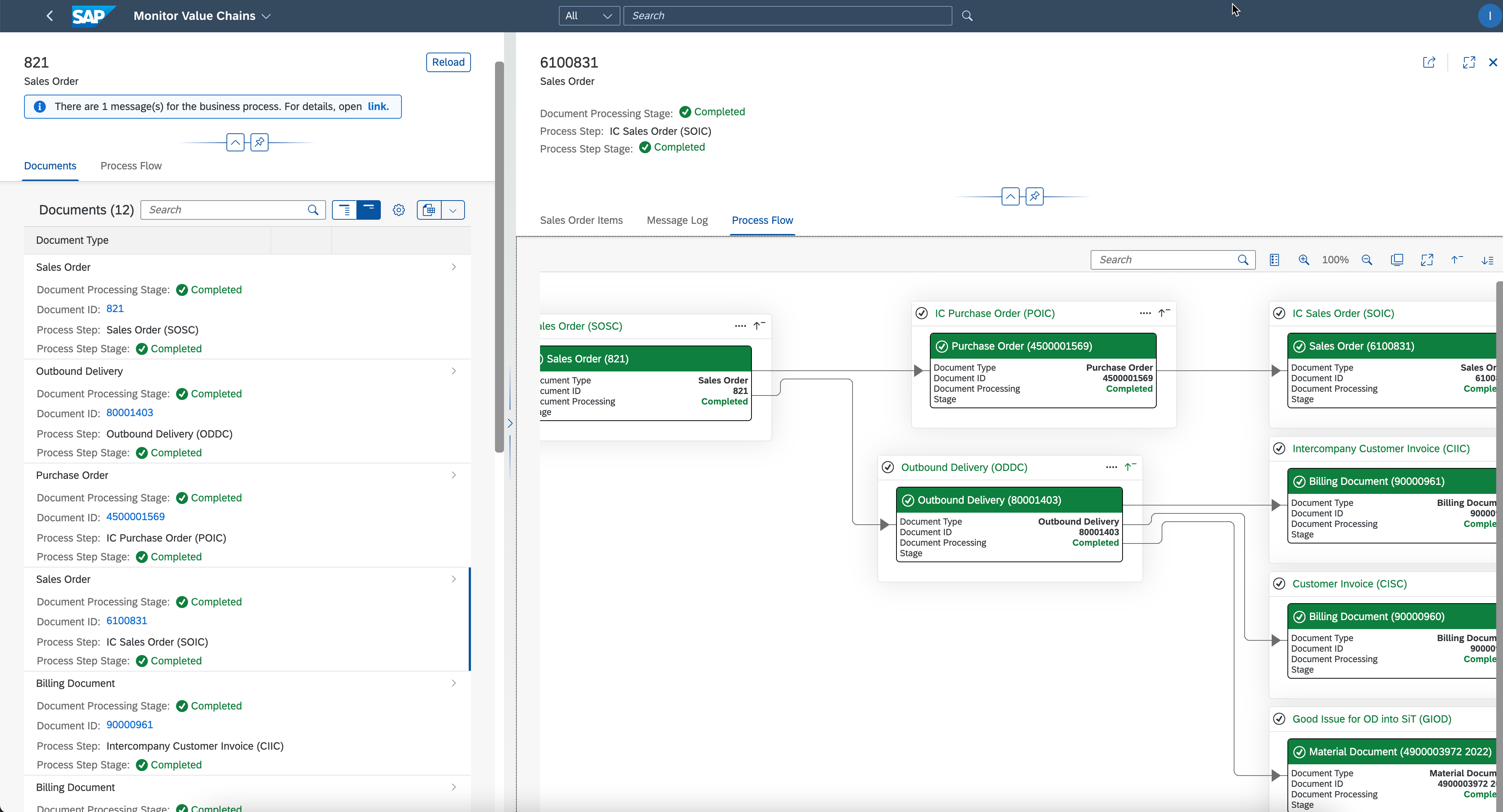 Since we have filled in the process breaks for operational logistics document, we could in future also draw up a value chain for a material across the entire Value chain including at aggregated levels for both actuals and plans.

The Universal Parallel Accounting provides a coherent and unified way of looking at various applications including asset accounting, inventory management and controlling. 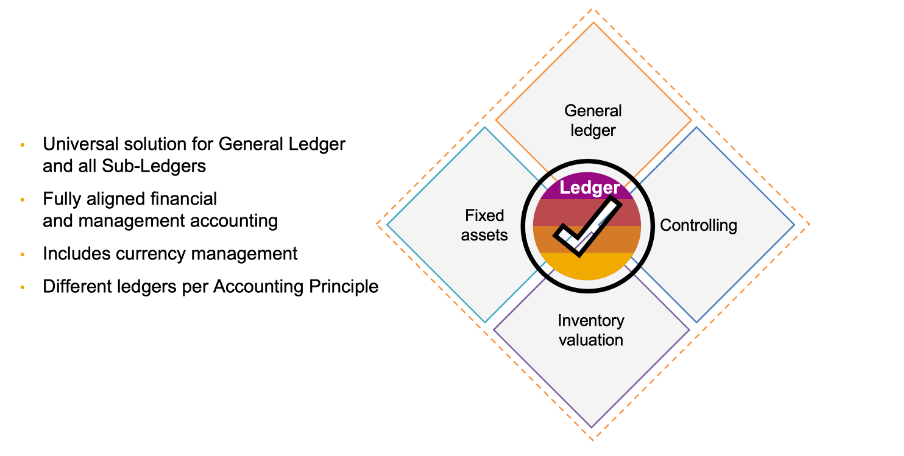 With S/4HANA 2022, we would introduce real time eliminations of Intercompany Revenue and Intercompany COGS, in a new ledger called as Group Valuation Ledger (or Transactional Consolidation View) 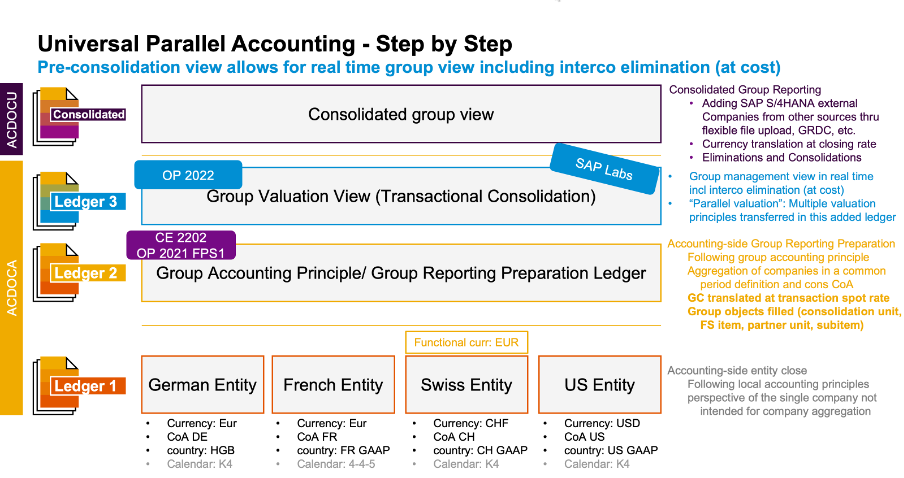 The Group Valuation View (Transactional Consolidation) is an additional ledger to record intercompany eliminations for operational transactions. From the Advanced Intercompany Sales flow in Figure 5 above, let us look how the account postings would look like: 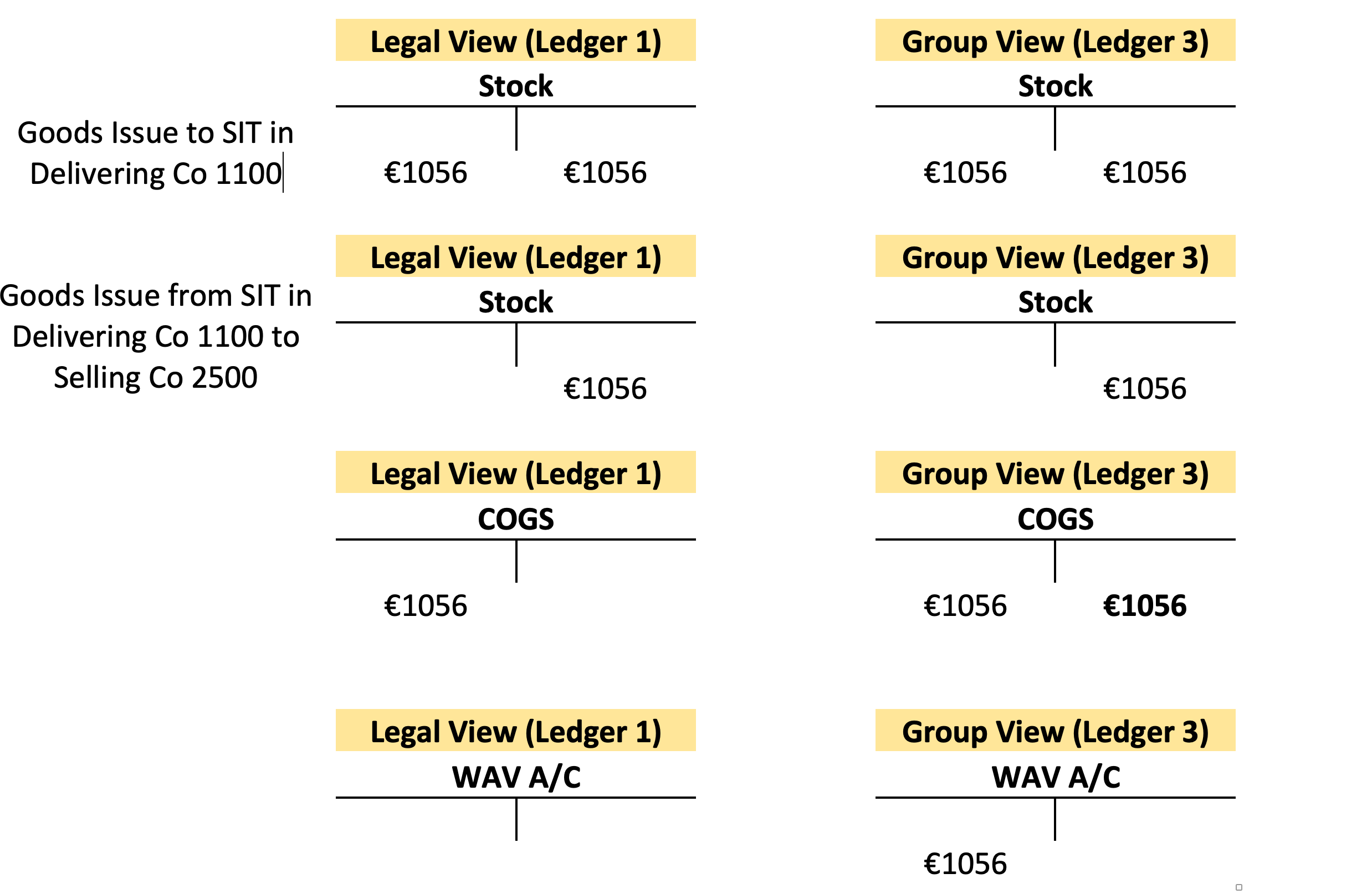 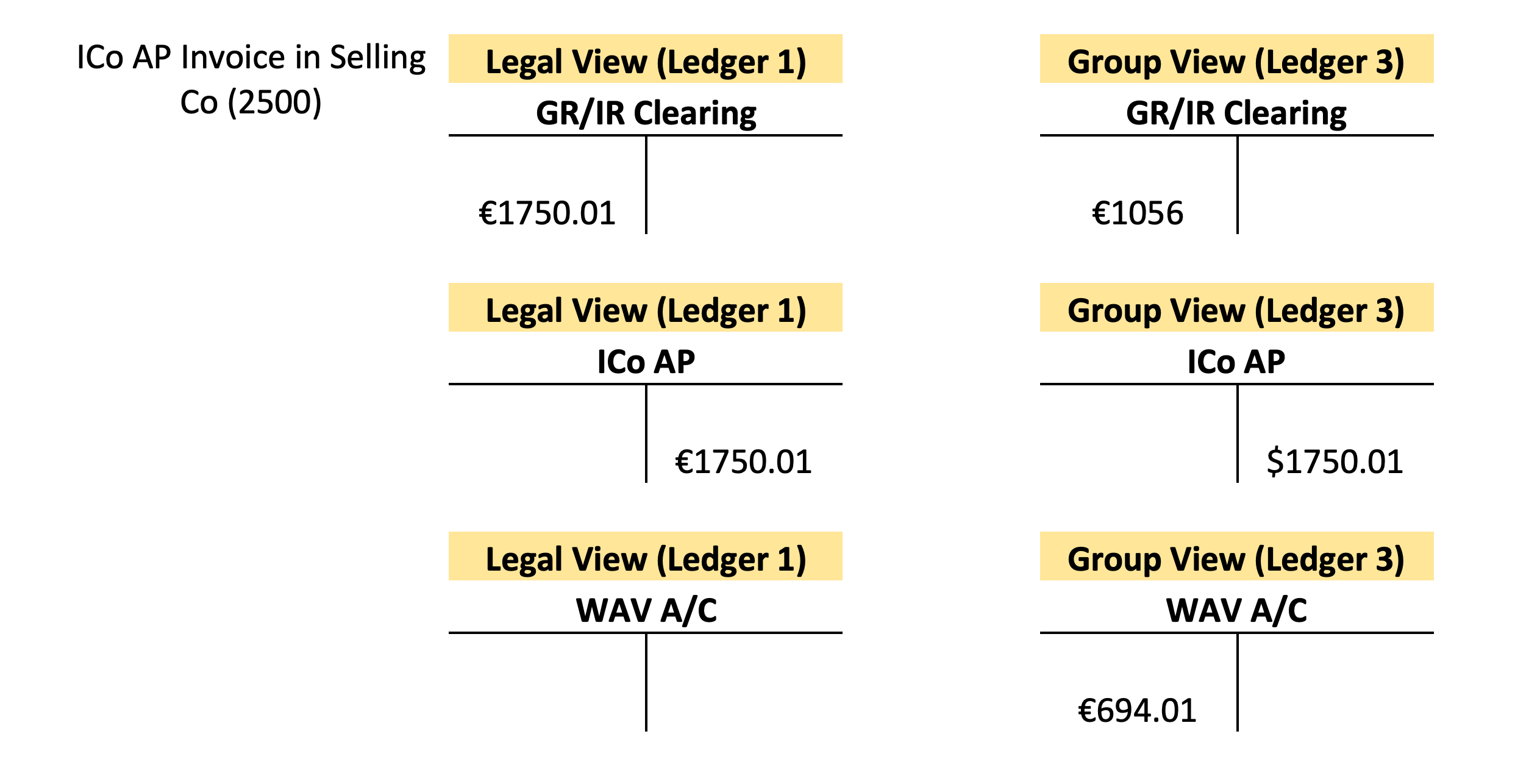 The WAV A/c holds the ICo Markup of €694.01 and at a group level the markup has been eliminated. If you also view the Goods Receipt, the inventory values are different. The legal view holds inventory value with mark up added. However, in the Group Valuation ledger, that is not the case and rightly so, since the inventory should be valuated at cost from a Group Perspective.

The T Journal of system entries can be displayed as below: 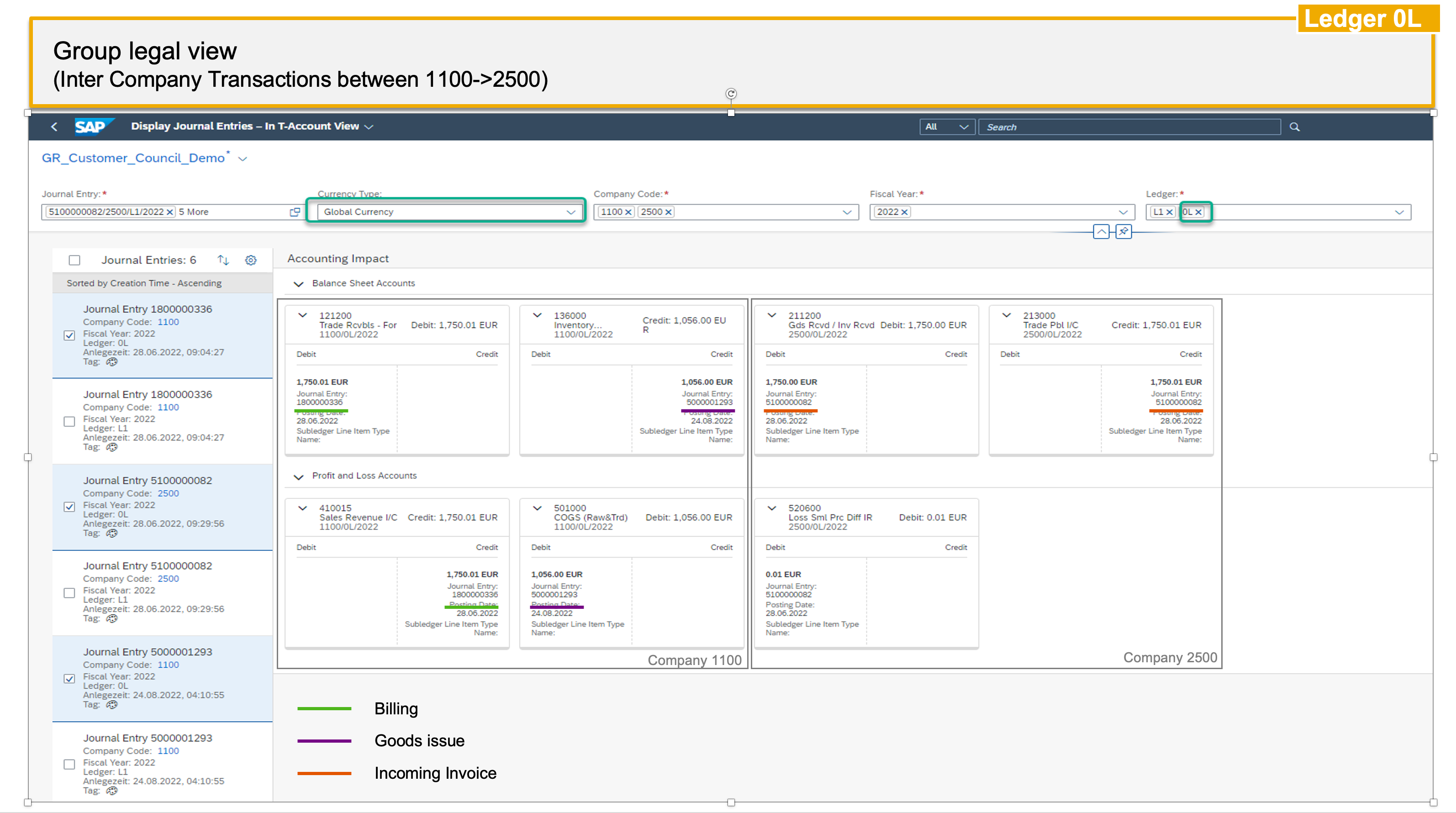 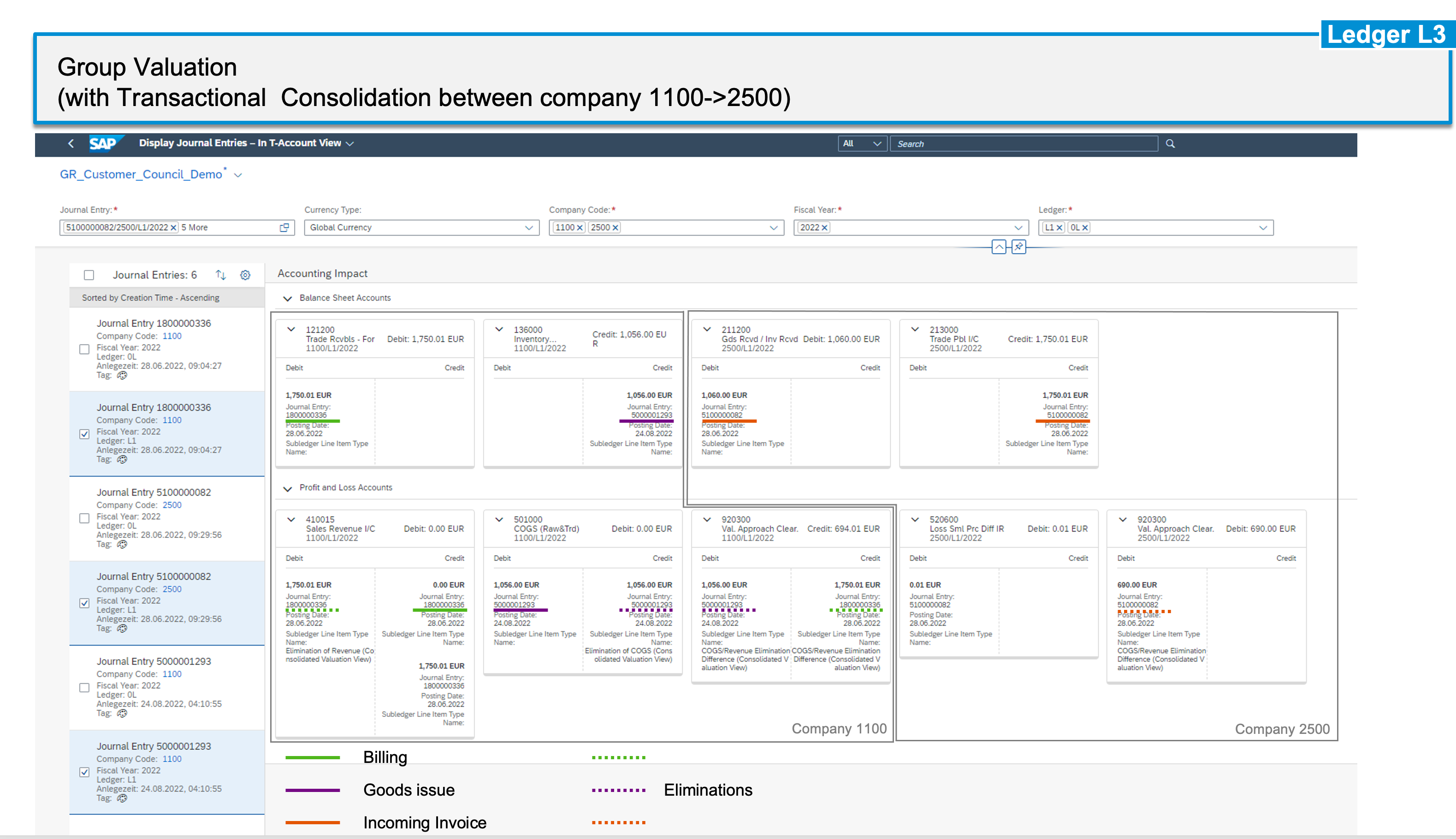 We now look at how the entries in Group Valuation ledger would be integrated with Group Reporting for preparation of Consolidated Financials.

With S/4HANA 2021 On Premise Release we had enabled the first steps for a closer integration of Accounting with Group Reporting. As shown earlier in Figure 9, a new functionality called as Group Preparation Ledger had been introduced with which certain fields like Consolidation Units, FS Items etc have been introduced in Universal Journal. With this functionality, there is no requirement to create a separate preparation ledger in Group Reporting.

With this the leading ledger (Local Ledger in the example) or Group Valuation ledger can be used as a source for preparation of Group Preparation Ledger. Since some of the GR relevant fields are available in Universal Journal, we could potentially enrich data through substitution rules in Finance to make it relevant for Group Reporting, resulting in faster close at period end. A new realignment function has been delivered so that historical data can be updated with GR relevant dimensions as well. In the future we want to further simplify the accounting integration of Universal Journal with Group Reporting to make Group Close as real time as possible. 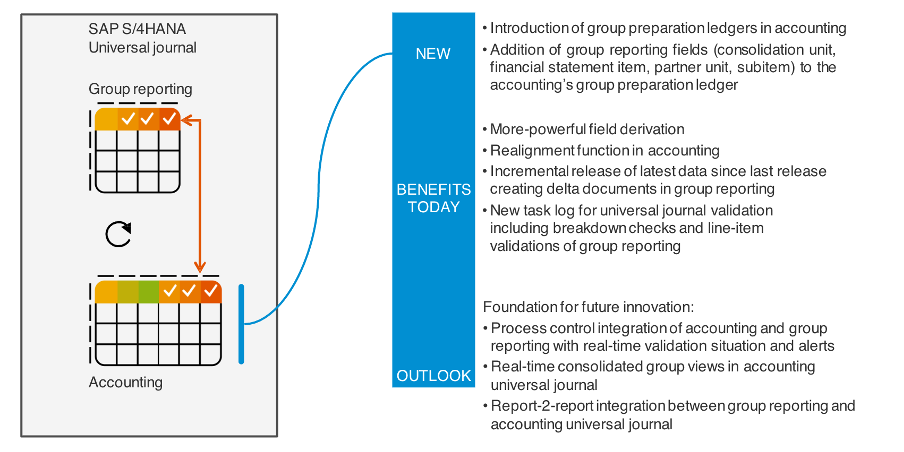 Now let us look at how the integration of Group Reporting and Universal Journal would look like today with S/4HANA 2022 PCE/OP using the Group Valuation View (Transactional Consolidation).

Current assets, typically inventory items, are sold within consolidation groups (for example, corporate groups). These transactions lead to interunit profits or losses. You can use the below two options to automatically eliminate interunit (IU) profits and losses. This elimination can be a statutory accounting requirement or a policy of management accounting for the group, either or both of which require that the consolidated statements portray the group as if it were a single entity. There could be two approaches to integrate Group Reporting today with S/4HANA 2022 OP/PCE:

The leading ledger in Universal Ledger would send full information to Group Consolidation Ledger (Balance Sheet, P&L Information). For example, the inventory information from leading ledger would be sent with Intercompany Markup without eliminations as it exists today. We can also bring in the margin free inventory data from Group Valuation Ledger (Ledger 3) via Group Reporting Data Collection (GRDC). Below is the architecture view of the integration. 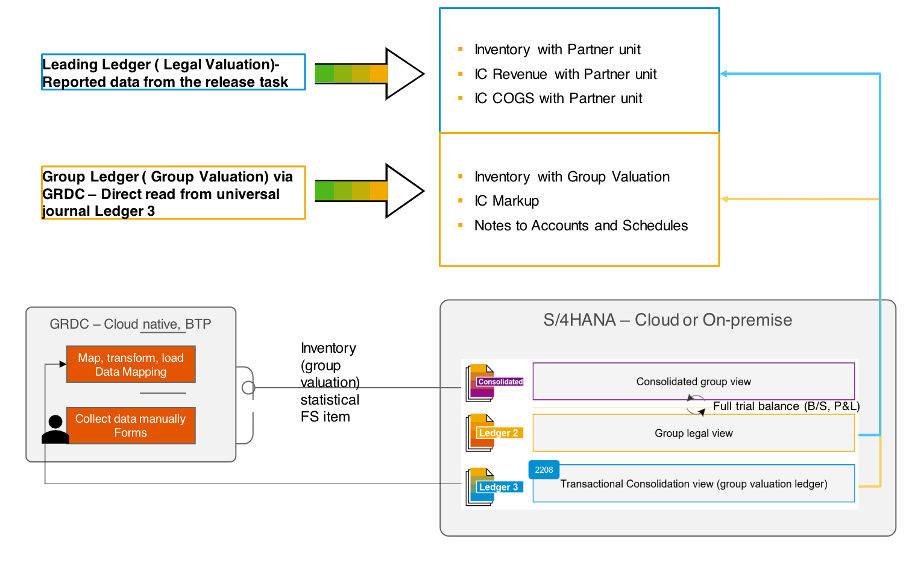 With this approach, Group Reporting has data with Mark up as well as margin free financial .

The data from Group Valuation ledger (ledger 3) would currently be shown as statistical FS Items, so that a Corporate Controller knows ahead of period close, the ICo Margins and COGS. The leading ledger would still be the source for legal consolidation.

In the future we would build on foundation provided by Universal Parallel Accounting & filling gaps in existing logistics processes to provide additional reporting KPI like CO2 equivalent, group profitability etc. We would also further simplify the data models between Group Valuation and Group Reporting to provide more simplified integration between the two & deeper insight into Group Financial across the Value Chain.