On autumn mornings, I like to bake pumpkin spice cinnamon rolls. I pick up flour, butter, milk, and more at the market, and then organize the ingredients and tools into stations at home. The dough mixture gets prepped, lathered with pumpkin puree, and shaped into individual swirls. The rolls then bask in a hot oven until golden brown while filling my home with a warm, cozy aroma. For me, it’s one of the best things about the season, on par with fall foliage!

But this post isn’t about making cinnamon rolls. It’s about designing web forms, specifically SAP Fieldglass’s Statement of Work, which is a contract between buyers and suppliers to agree on scope, deliverables, fees, workers, and a timeline for a project. As a user experience designer who enjoys the kitchen, I see how prioritizing efficiency and organization creates smooth and easy processes—whether it’s filling out a form or baking fresh bread from scratch.

Who is the user?

One essential part of good design is understanding the user. Research showed that people very often entered multiple items into the Statement of Work; however, the old page required them to make repetitive, tedious actions. Supporting their goals and behavior, users are now able to add multiple items all at once instead of one by one. For example, they can add more than one Event at a time as well as add multiple sites simultaneously when defining a worker’s role. Similar to making cinnamon rolls, it would be frustrating and wasteful to travel back and forth between the kitchen and the market to shop one ingredient at a time, rather than gathering all the ingredients in a single visit. 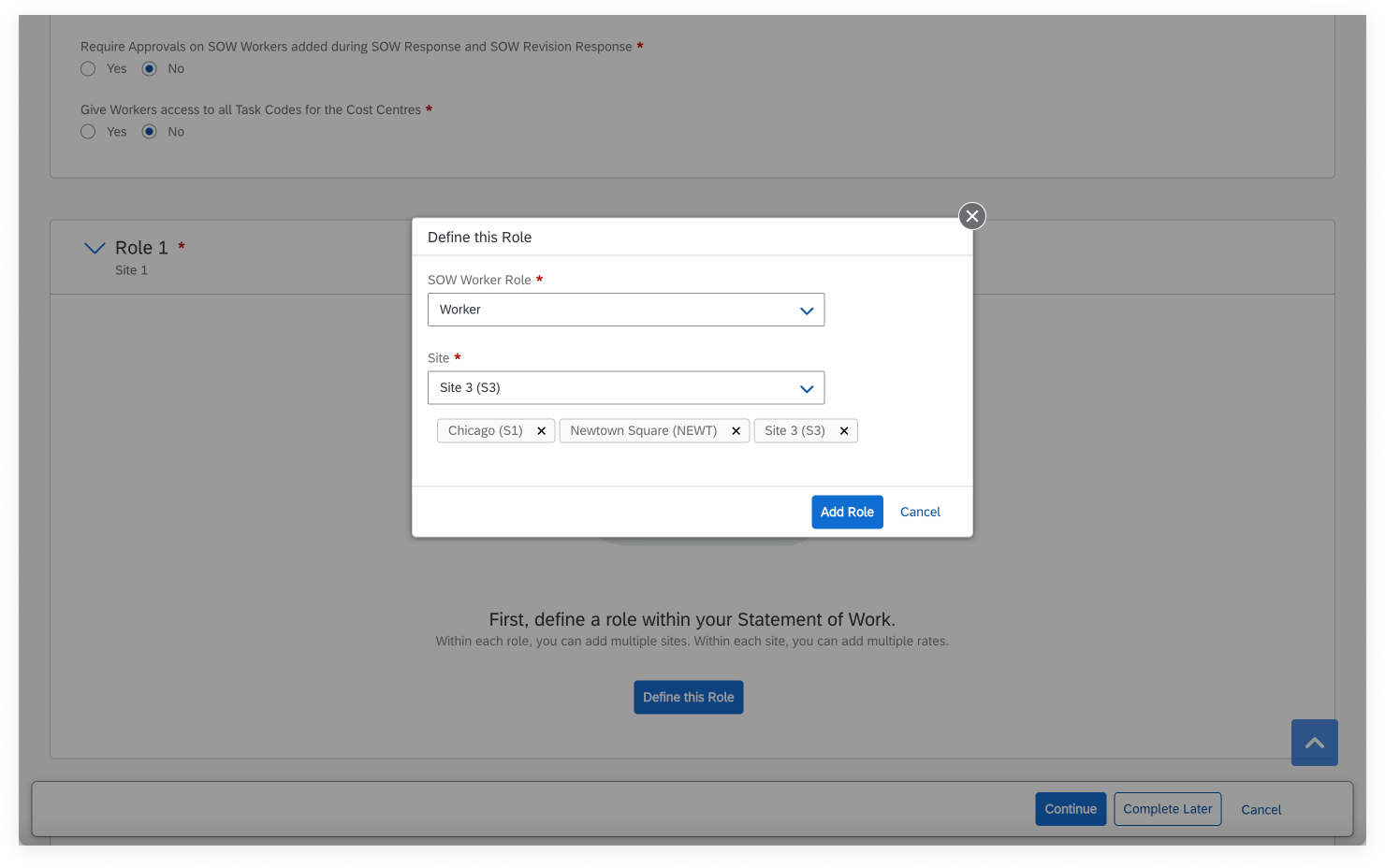 Users can assign more than one Site when defining roles for workers.

What needs to be improved?

The other part of good design is identifying goals for the design. In the case of Statements of Work, one goal was to empower users to stay focused on their task. A flyout modal was designed to bring together all the relevant pieces needed to add Events to the form. Instead of scrolling to different areas or getting lost in multiple forms and multiple modals in the old page, users now have a single, fixed panel where they can concentrate their attention. When baking cinnamon rolls, it would be a messy (or messier!) process if different ingredients and tools were scattered around the kitchen regardless of their purpose. But placing cream cheese, sugar, vanilla, and a mixing bowl in the same area—because they yield frosting—makes the experience cleaner, easier, and sweeter. 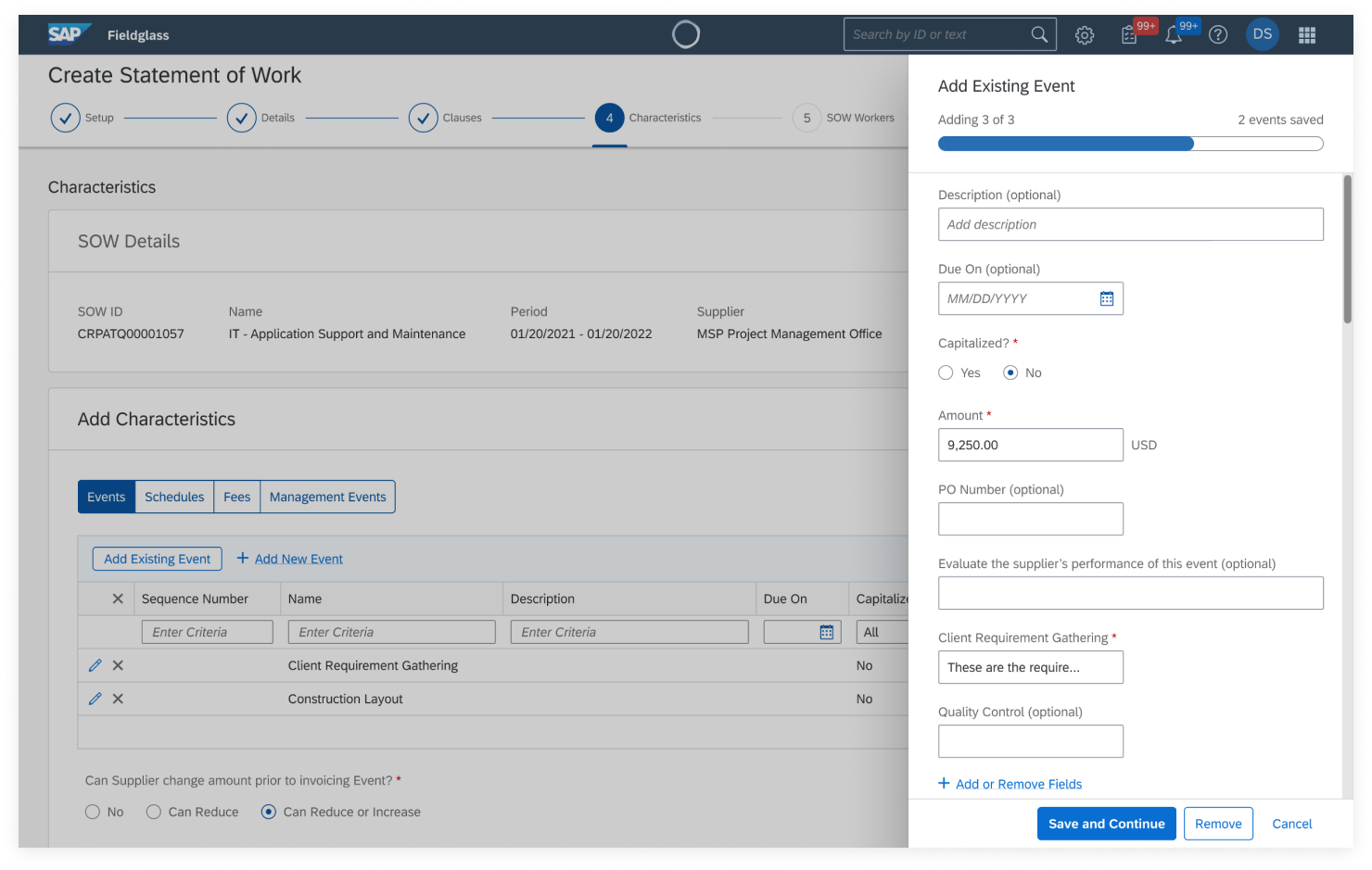 A flyout modal, the panel fixed to the right side of the page, is a space where users can focus when adding Events.

A recipe for success

Quality design work requires understanding who the user is and what needs to be improved. Without these details baked into the process, products and features are built with no clear definition of what’s good to the people who will use them (I credit Scott Berkun’s How Design Makes the World for this insight). If I’m baking cinnamon rolls for the enjoyment of others, then I need to know who will eat them and what “good” means to them. Does “good” mean that the rolls should be bite-sized? Gluten-free? Or drenched in warm frosting? With SAP’s vision to make the world run better and improve people’s lives, good design is fundamental to creating products, features, and even forms, that users could enjoy.