With the latest version of the SAP Analytics Cloud, add-in for Microsoft Office which was released on October 6th, 2022 Microsoft Excel users are now able to use a new function SAP.GETDATA. This function returns the data value for a specified set of dimension and member combinations. This enables users to build asymmetric reports or blend data from several data sources e.g. SAP Analytics Cloud, SAP Data Warehouse Cloud or SAP S/4HANA Cloud into one Excel sheet. Additionally all Microsoft Excel formulas and formatting options can be used.

The syntax of SAP.GETDATA is the following:

The following steps show how function SAP.GETDATA can be used to create a report which shows actual and forecasted values for month September 2022 on the left side of the G/L Accounts dimension and the Year-to-Date aggregation on the right side. It is based on one SAP Analytics Cloud model with dimensions G/L Account, Time and Version among others.

First the SAP Analytics Cloud model needs to be added as a table. It helps to take the target dimensions G/L Account, Time and Version into the drill and copy their IDs for the later usage within SAP.GETDATA. 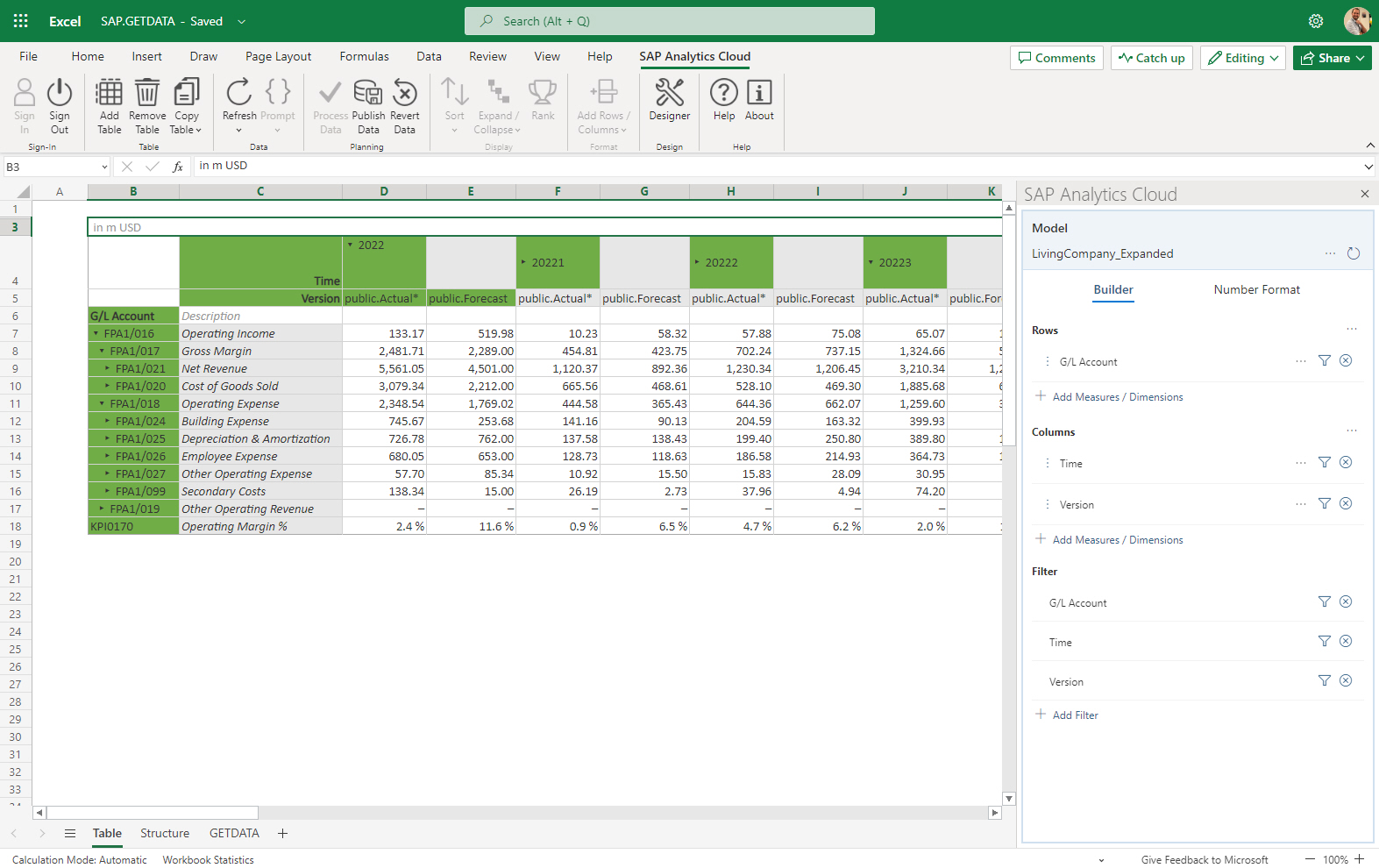 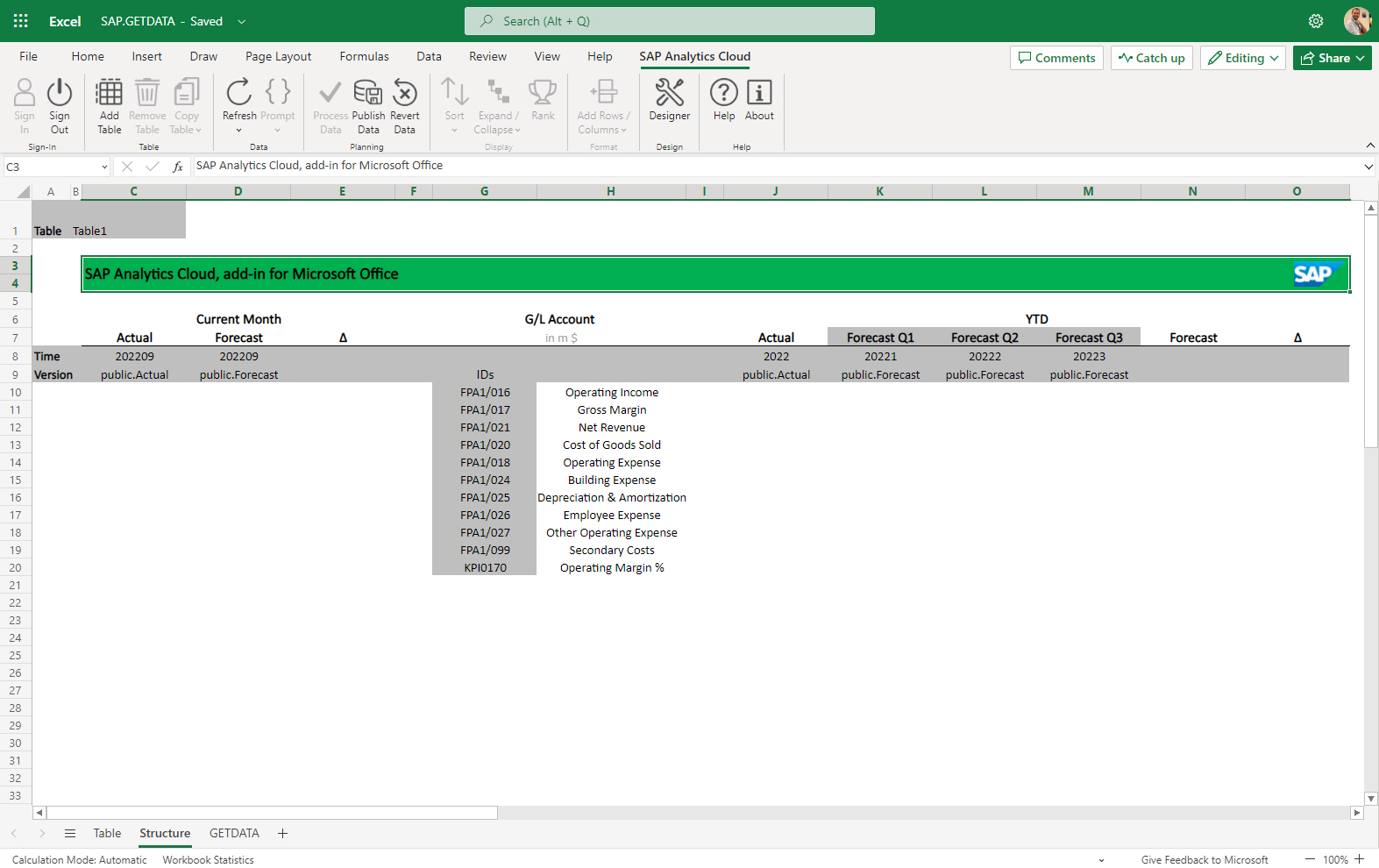 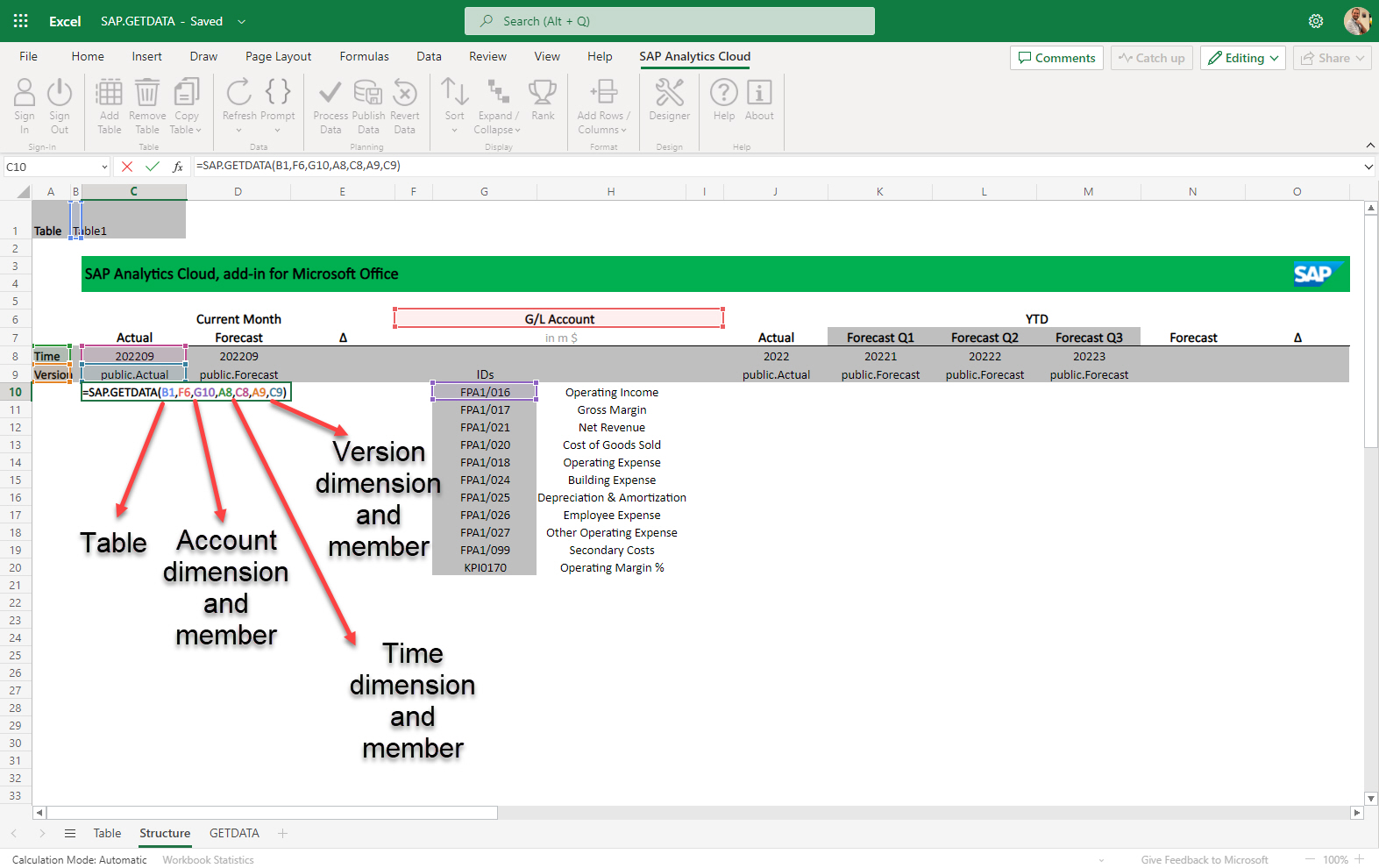 Drag the formulas across the cells: 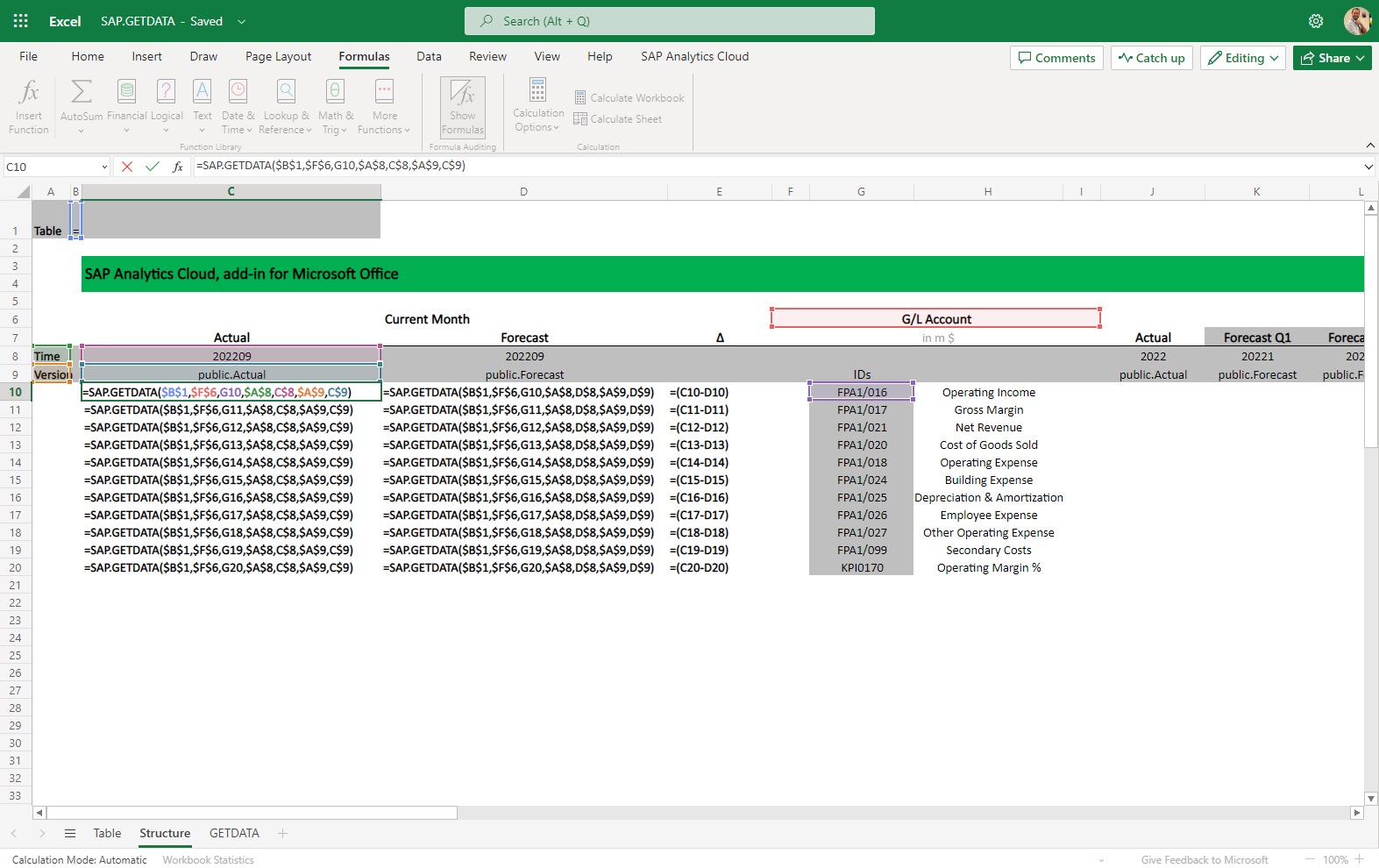 4) Use Excel formulas and formatting options:

To finish the report hide the grey colored columns/rows with the member IDs. Calculate the differences between actuals and forecast and format the cells. 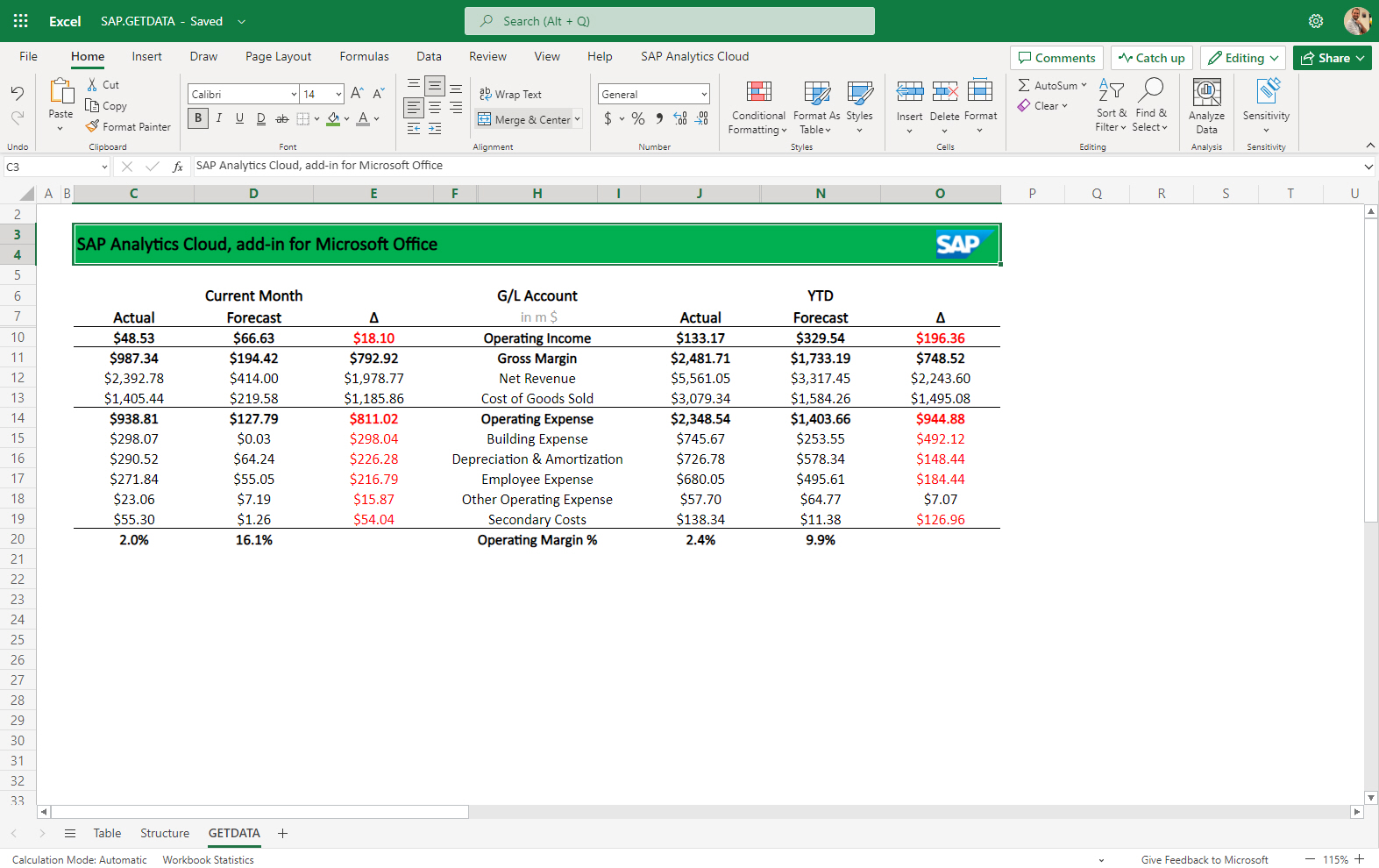 Is this also working for BW/4 ? I would expect yes ... Strange that this isn't mentioned . Seems to be a SAP directive Do Not Mention BW/4 ....

For BW/4 the recommended add-in remains SAP Analysis for Office which offers this formula as well.

What is the recommended Excel add-in for Hana Cloud?
Because SAC add-in doesn't seem to support Hana Cloud and AFO only with local IP connections is not OK.

currently only via AFO and the Analytics Adapter, but strategically the SAC add-in. We haven't received much asks about SAP HANA Cloud for the SAC add-in and therefore didn't prioritize it yet. I created an influence item, so please vote for it: https://influence.sap.com/sap/ino/#/idea/290532

Thanks for the informative blog Steffen!

I had a few questions on the Report. Have you used formulas in Rows 8,9 (the grey colored cells)?

What is the formula you have applied to get the YTD Numbers? Assuming I have data till December in the model and I want to show YTD for October in the report, will the formula have to be hardcoded based on Quarter ?