Solution Architectures On The Journey to Data Warehouse Cloud

There are many ways to get from a legacy data warehouse to a data warehouse in the cloud. Even more there might be a lot of details which have to be considered when moving from an on-premises environment to a cloud environment.

One methodology which was introduced by SAP is the so-called BW Bridge accelerator workshop. The main part of this workshop is called the discovery day. On the discovery day we get into an understanding of the customer’s as-is architecture, envision possible target architectures and discuss various transition architectures together with the customer. In this blog post we focus on the solution architecture. In a further blog we will discuss the business value of SAP Data Warehouse Cloud we evaluate in the BW Bridge Accelerator Workshop. Meanwhile we executed this workshop several times and these findings shall be summarized here. In the sequel we discuss these points in detail and show what has to be considered and what are the right questions to pose.

If a customer has already moved to BW/4HANA a DWC nonetheless will provide advantages and several quick wins if we think about the new possibility to connect to cloud data sources, see ad 6.

ad 2. Key criterium here is that with regards to frontends SAP Data Warehouse Cloud (DWC) allows access for SAC (web-based), SAP Analysis for Office (Excel-based) and SAC, add-in for Microsoft office beside ODBC-based non-SAP frontend tools like e.g. Power BI. In general it can be said that the migration of SAP frontend tool whose data source are BW queries is a two-step approach:

This could mean a considerable effort. If a customer is just in the planning of an SAC migration then we would favor the deployment of a DWC in order to develop the new SAC reports already now on the right data sources and omit a further frontend migration project in the near future. Depending on the number of reports this migration will take some time and a hybrid architecture consisting of the legacy BW system and in parallel a DWC would be the recommendation here. Reports could be rebuilt one-by-one into DWC. This provides also some time buffer if features of BW queries cannot be migrated in a fully automated manner.

ad 4. ABAP developments beside those occurring in user exits like e.g. expert routines in transformations are possible to be taken over into the ABAP stack of the BW bridge. It is also here that we saw that customers are willing to clean up legacy developments and replace native ABAP developments with something completely new.

ad 5. The Java stack is mainly used for a kind of BI portal but also for scheduling purposes as e.g. information broadcasting. Scheduling of reports cannot be taken over 1:1 into SAC. We come across a similiar requirement with customers using Business Objects as well: BO has also scheduling features which have no exact counterpart when trying to move away from BO.

ad 6. Data sources based on the ODP framework can be taken over to BW Bridge without any further efforts. Other SAP data sources and non-SAP data sources like e.g. relational databases have to be rebuilt in a way to be ingested directly into DWC. This means that data models which reside in the legacy BW have to be remodelled in DWC as SQL data warehouse which also means probably some effort.

But it is also at this point that something quite new enters the game and will provide a real quick win with DWC, namely cloud data sources. As we know SAP BW is a quite mature product developed during the last 20 years but mainly for SAP applications on-premises like ECC systems. There were also non-SAP sources like relational databases via dbconnect or flat files but SAP BW is definitely not really capable of connecting to cloud sources like e.g. SAP cloud LOB solutions as Success Factors, Ariba, Concur, …., but also non-SAP cloud products as e.g. all kind of cloud data lakes (Azure, AWS S3, GCP,…). And these cloud sources are definitely something which is a must to consider already now for every customer. SAP DWC offers many out-of-the-box connectors to such cloud sources.

Another quick win might be to replace flat file interfaces by their actual data producer: This means that instead of downloading the data from some tool and then upload them again into BW, try to ingest these data directly into DWC from the tool which produces the data.

Also when considering these cases we mostly end up with a hybrid transition architecture.

ad 7. There are several reasons why customers might use external HANA views which can be generated from BW infoproviders:

Whereas the first case (3rd party tools) needs a migration into the ODBC-based SQL spaces, the latter two have to be considered in detail case by case. Especially the last one which can include quite tightly interlocked data models which use both external and BW objects might become challenging to get translated into DWC. It shall also be mentioned at this point that DWC allows an integration of the HANA Development Infrastructure (HDI) such that HDI containers can be integrated into DWC modelling.

ad 8. Add-Ons have to be investigated case by case. The answer for SEM-BCS is usually that consolidation moves into group reporting in S/4HANA.

The first step when implementing a DWC should always be a quick win like e.g. connecting to a cloud data lake of a  hyperscaler but also to cloud applications like Success Factors or Ariba. A third quick win might be to have a quick integration possibility with other machine learning solutions. 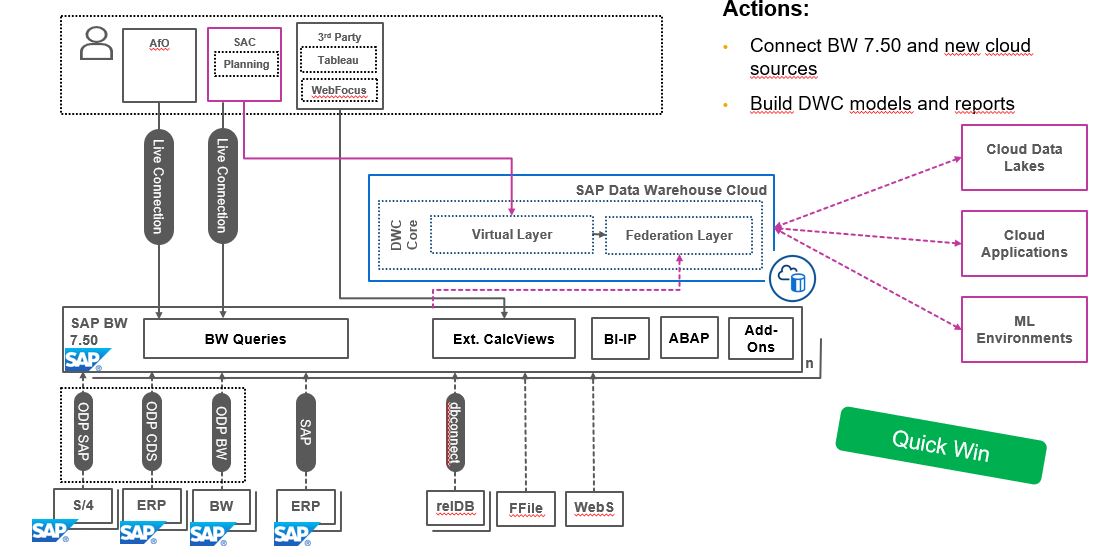 Find Replacements for Planning and Other Applications 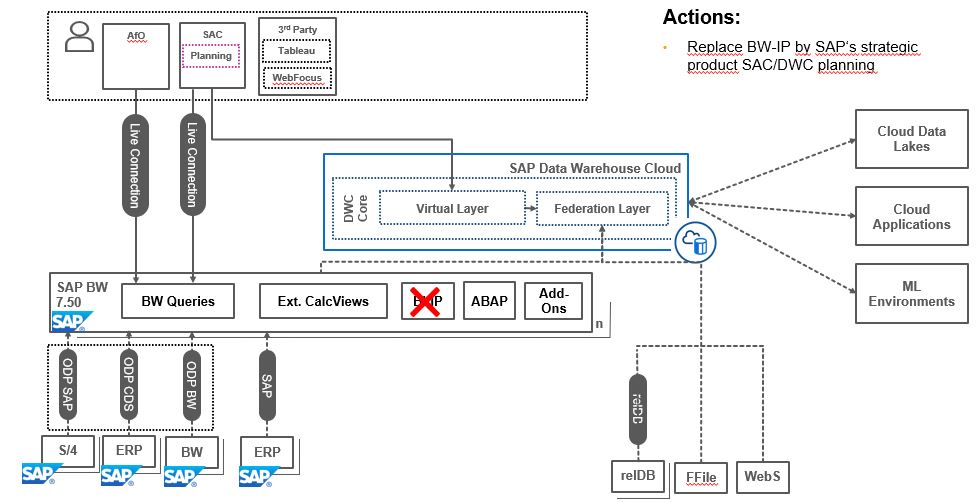 Get Rid of the Legacy Business Warehouse 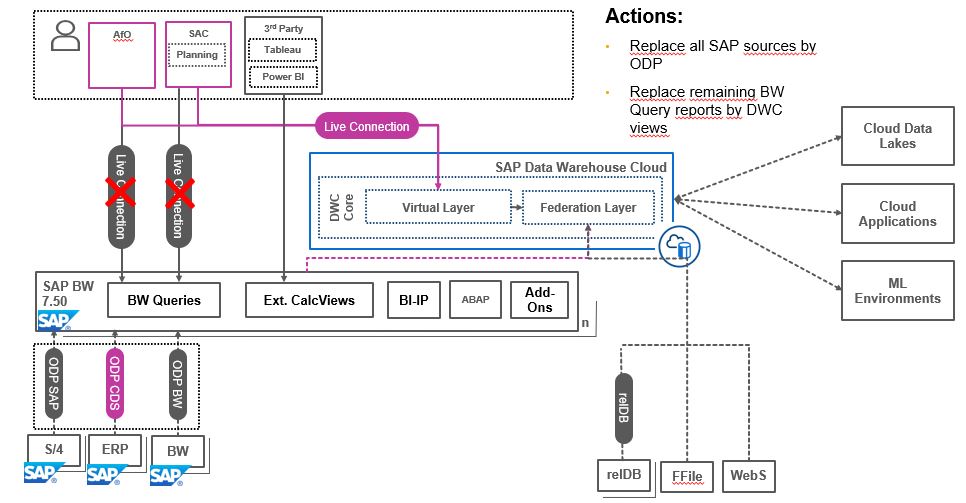 After the final step the target architecture could look like this: 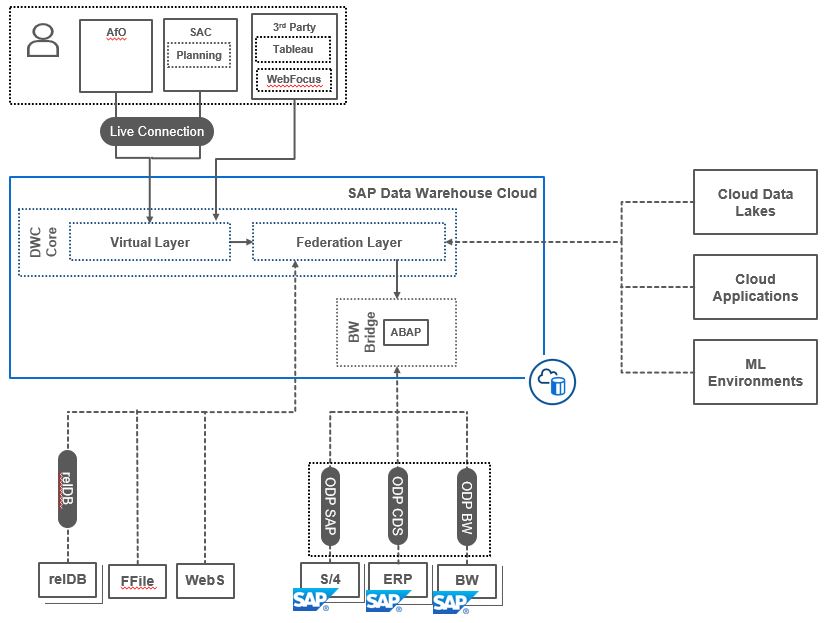 Resumee and Suggestion for Project Timeline

The following shows a proposal for a possible project timeline with the hybrid architecture ansatz and target DWC BW Bridge. Take into account that the actual length of the project will heavily depend on the used components of the legacy BW 7.5 system. 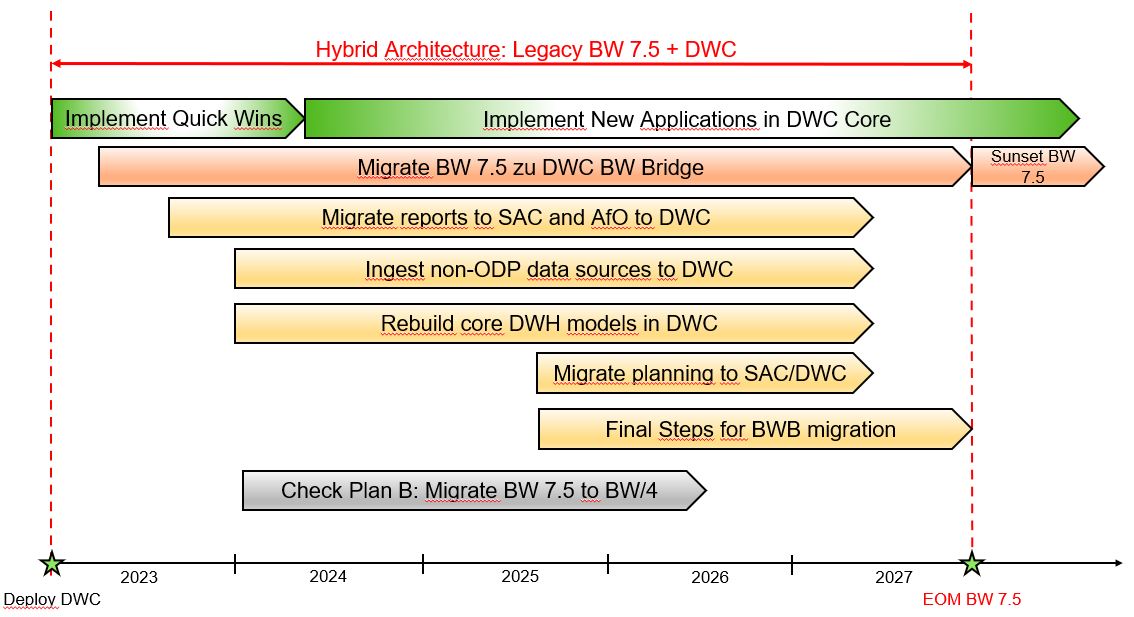 A lot of official information can be found in SAP notes

In the final architecture option I see 3rd party tools such as Tableau and WebFocus connecting to the DWC Virtual Layer.  Where would the recently released DWC OData API fit in this architecture?