In this blog post we will describe testing phase of SAP S/4HANA Cloud 3SL Implementation or Upgrade projects. To start described activities following pre-requisites are necessary:

Before we start our journey, let´s highlight small piece of theory. During the testing activities we need to separate 3 types of tests:

Preparation to the testing activities

First of all it is necessary to identify test scenarios – pick basic processes & minimum requirements for the project to succeed. To document this, it is recommended to use Requirements application of Cloud ALM:

Test scripts, which are available for many Scope Items in SAP Best Practice Explorer can help to define such requirements:

After the synchronization we can proceed with import of relevant automated test cases´ content in Cloud ALM in the same application:

Now we need to create manual test-cases. It is possible to create every test case from the scratch and describe it in Cloud ALM:

Another option is to import Test Scripts from the SAP Best Practice content for SAP S/4HANA Cloud into SAP Cloud ALM, how described in this SAP blog post.

When all tests are created, they have to be assigned to requirements and user-stories. Please, refer to this SAP blog post for the detailed information about the procedure.

The last and quite obvious step of this phase is to set all created tests to “Prepared” status in SAP Cloud ALM: 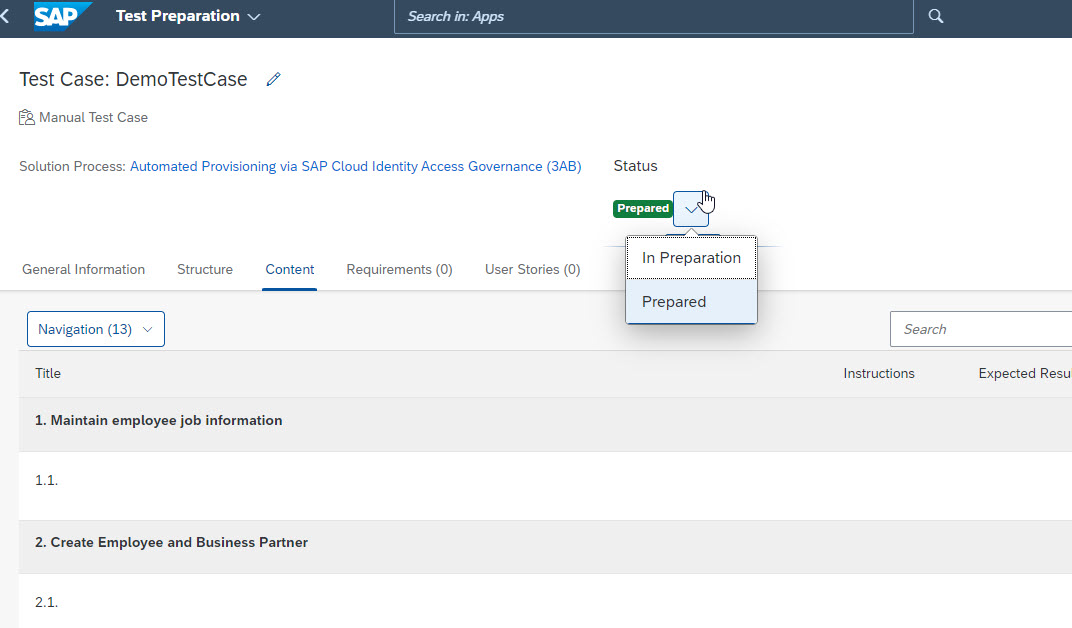 So now we have 2 types of tests ready to be used: automated and manual.

For automated test-cases we trigger their execution from Cloud ALM Test Execution application:

Once the run in SAP S/4HANA Cloud of such test-case is finished, results will be available in the same application of SAP Cloud ALM.

Manual test cases have to be executed accordingly their descriptions (available in SAP Cloud ALM) in SAP S/4HANA Cloud, and the results to be documented in SAP Cloud ALM.

In case error identified during test execution, defect to be created (in Cloud ALM Test Execution application) and followed-up:

If defect requires SAP Support, it is necessary to open incident in Service Now system.

Once issues are resolved, defects get closed and retest is needed.

Additional information about defect management can be found in this SAP blog post.

This should be done via SAP S/4HANA Cloud ATO tools:

In the next SAP blog post we will extend the process with 3rd-parties tool, which can also be integrated in the testing flow.

Will there also be a similar scenario for the private cloud environment in the future?

it is possible to do automated testing for S/4HANA Private Cloud via Cloud ALM as well, if I am not mistaken.