Many of you have read Harald Kuck’s blog post https://blogs.sap.com/2021/09/30/steampunk-is-going-all-in/ which explains nicely the benefits and concepts behind Embedded Steampunk.
But we still get a lot of questions from ABAP experts asking what exactly Embedded Steampunk is about.
This blog provides some more details about Embedded Steampunk for ABAP developers. But stay tuned – we are in the final phase of releasing a new SAP community landing page for Embedded Steampunk. Additionally, a comprehensive SAP S/4HANA ABAP extensibility guide will be published soon. All these resources will answer most of your Embedded Steampunk questions.

You all know the Classic ABAP extensibility model which has been used during the last decades to extend SAP ERP systems. It allows ABAP developers to use and even to modify all SAP objects. This is powerful and flexible. But the missing clear interface between SAP code and the extension adds a lot of test and adaptation effort during SAP upgrades – this is a no-go for the automated SAP software updates in the public Cloud. 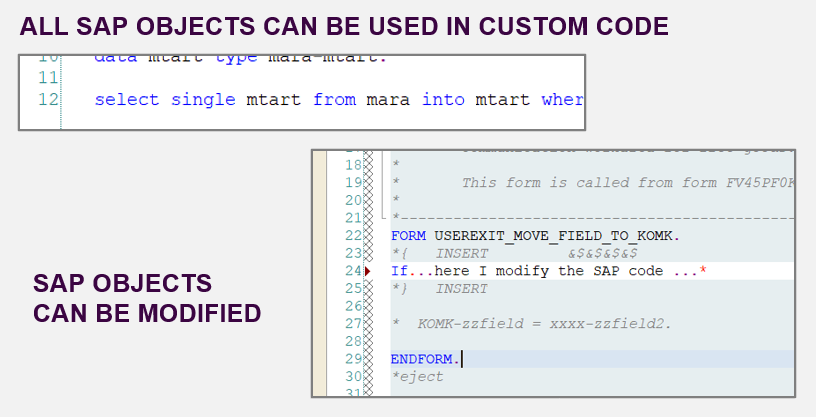 The ABAP Cloud development rules are enforced via:

The ABAP Cloud development model is mandatory for:

ABAP Cloud will provide ONE common and future-proof ABAP development model for side-by-side extension on SAP BTP and for extensions running directly on the SAP S/4HANA stack:

Examples and a glimpse into the system 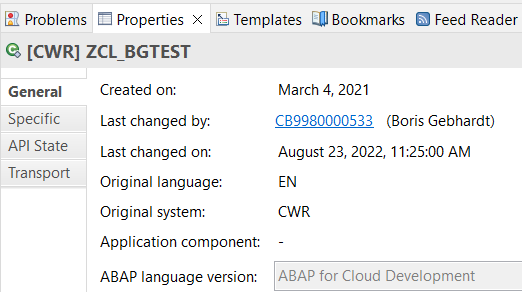 In the public cloud ABAP Cloud development is mandatory

In SAP S/4HANA private Cloud and on-premise, ABAP Cloud development will be a recommended option – especially for new ABAP development projects. The ABAP language version of custom ABAP objects  (e.g., an ABAP class) can be changed one by one from Classic ABAP  (= Standard ABAP) to ABAP Cloud (= ABAP for Cloud Development)

The ABAP class ZCL_BGTEST in the screenshot underneath uses the ABAP Cloud development model (ABAP language version “ABAP for Cloud development”). The class cannot be compiled because of two ABAP statements containing syntax-errors: 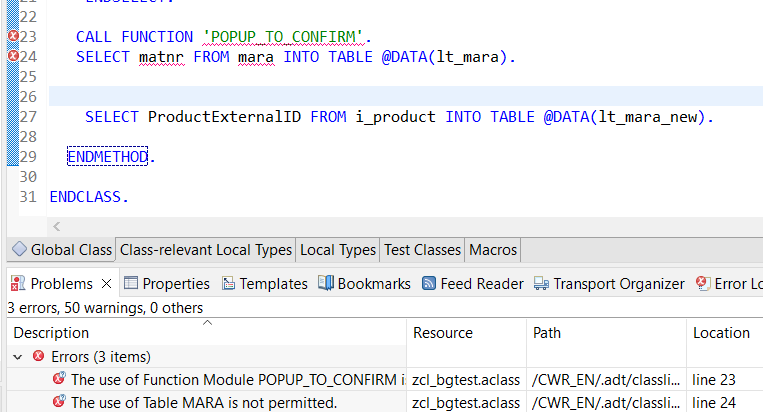 As a developer without access to a system with Embedded Steampunk, how is it possible to identify the objects that are released?

I would like to use released objects on lower releases, if they exist, so the code I'm writing today is compatible with Embedded Steampunk.

For "SAP BTP ABAP Environment" (aka "Steampunk") there's the option to use a trial system. 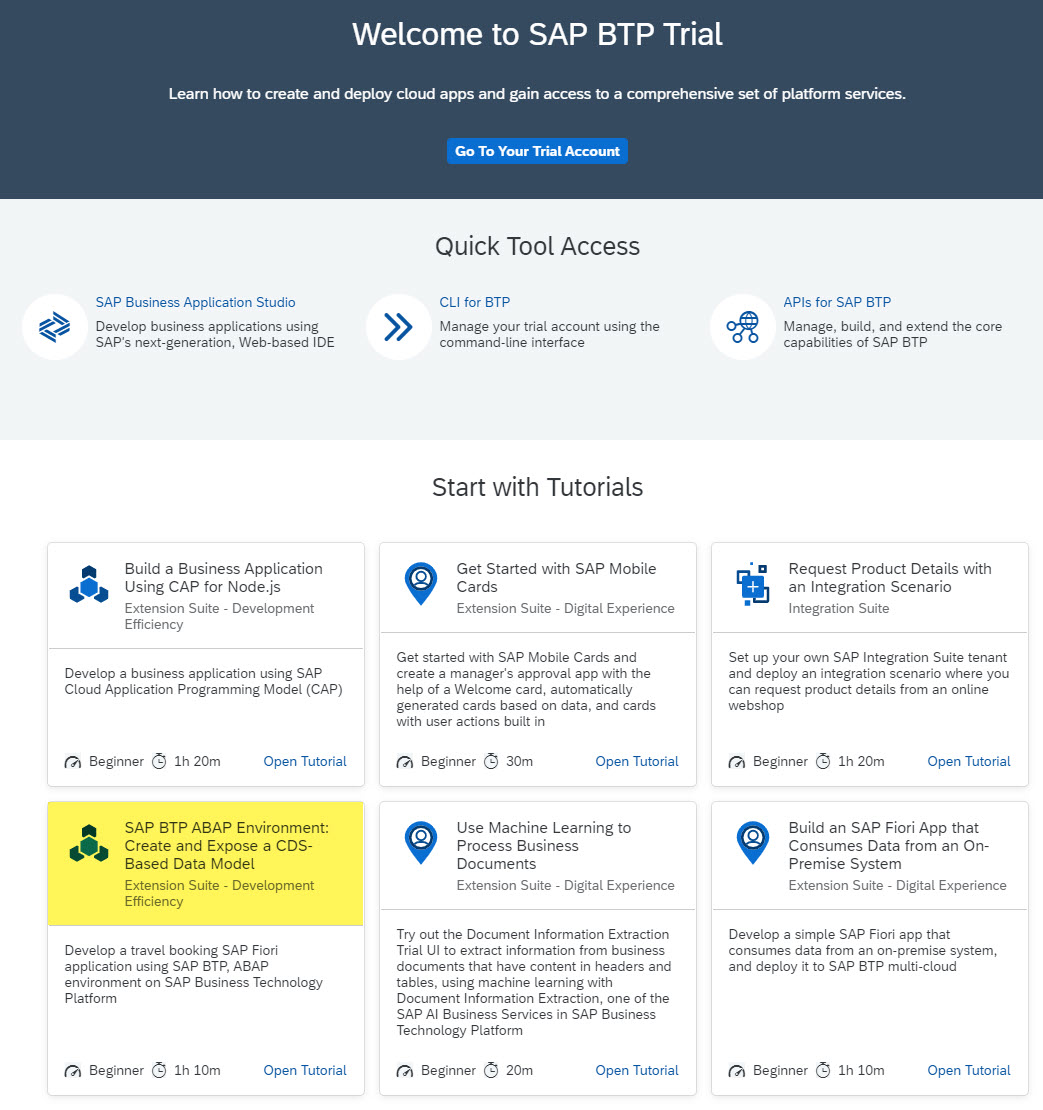 There's even a tutorial provided.

For Steampunk, most released objects are listed at https://abapedia.org/steampunk-2208-api/

But I don't know of a way to list released objects in Embedded Steampunk(SAP S/4HANA Cloud) without access to a system. I find it important that already today, all developers in lower releases starts aligning towards the released objects.

Will there be a free public trial for Embedded Steampunk in the last SAP S/4HANA Cloud ?

These sections will be extended continuously with newly released objects.

Please also have a look at the product documentation on SAP Help to get more information about CDS Views and Developer Extensibility in SAP S/4HANA Cloud.

very good point, of course the objects that are released on Steampunk are also available in Embedded Steampunk in SAP S/4HANA Cloud. You can find more information in the corresponding section of the SAP Help documentation.

The focus of the released objects listed on the SAP API Business Hub is on business object-related object types.

As an interim solution you can check the content of note: https://launchpad.support.sap.com/#/notes/3088062

Our goal is to provide this information in a human and machine readable format in near future.

Thanks, I've noted that 150+ BAPIs are mentioned in the "old API" column, does SAP consider BAPIs to be deprecated/obsolete?

Once a BAPI has been developed and released by SAP, its interface definition and parameters remain stable in the long term. This ensures that an application program is not affected by changes in the underlying SAP software and data.

If BAPIs need to be enhanced, for example by adding optional parameters, SAP can do this without affecting the stability of existing applications. At the same time new applications can benefit from the enhanced functions.

BAPIs will most likely not be released for ABAP for Cloud development. Read access to business data will be available via CDS views. Updates via RAP facades.

"Updates via RAP facades" - is this mentioned somewhere in documentations or any of the learning courses?

I understand that USING BAPis won't be possible to do it in the cloud version, but in the on premise we may still need to be required to use a BAPI as I don't think all available BAPIs have been replaced by RAP facades.

When working with RAP I noticed it is not the best tool to work with BAPIs, especially where you have a Parent->child relationship and have to pass them to the BAPI at the same time e.g. BAPI_PO_CREAT1. There is still no example how to do it. BOPF FIORI apps would be using a draft table and then converting it to an active instance on 'SAVE'  (although this is not released to customers - so it is a hack!).

Still not sure how this would be done in RAP. An example would be much appreciated.

And maybe a quick blog post comparing the on premise to cloud world e.g.

Before: SELECT FROM DB TABLE

Cloud: BADIs implemented in Eclipse ADT or via a "Custom Logic" FIORI app

weil, this note is better than nothing, but for anything non-obvious it is not helpful.

eg kbed is also used in maintenance orders and not only in production orders which is completly ignored in the table from the note.

eg currently I am searching for a method to parse an ISO timestamp string into a timestamp (like cl_xlf_date_time->parse offers) - does anybody here has a suggestion for this (besides manual implementation) in steampunk?

Otherwise we are looking forward to S/4HANA Cloud ABAP Environment!

I typically search via https://github.com/abapedia/steampunk-2208-api/search?q=iso&type=code

Thanks, great idea, I wasn't really aware that I could search abapedia.

if the note 2923223 is back, you'll find there a list of public released and also deprecated APIs like classes, Views and BDEFs and so on...

I created a new ABAP repository Tree in Eclipse ADT for released objects. 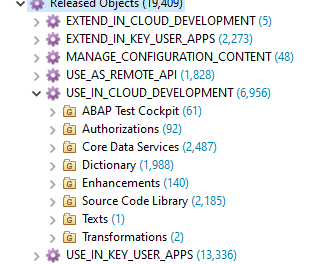 Can we use BADIs,User Exits BTEs in embedded steam punk ?
Which classical SAP features SAP is trying to bring in Embedded Steam punk ?
Thanks,
Vijay

BADIs are fully supported in Embedded Steampunk. BADIs belong to the public extensions points and therefore are upgrade-stable.

User exits and BTEs belong to classical extension techniques and are not supported for ABAP Cloud development following the Embedded Steampunk rules. They still occur in private Cloud deployments, though, and can be implemented using the classic extension approach.

There is a list of all released BADIs available as attachment to OSS note: OSS Note mit Successor Excel

Thomas Fiedler  : Really help SAP Note 🙂 I am able get most of the new BADIs and hopefully these will be available in the on-premise version of 2208 as well ?

Yes, this is our goal to provide the same list of released BAdis also for on-premise with the 2022 release.

Are there replacements for BTEs? Perhaps in the same way that VOFM has a replacement in ES_SD_SLS_EXTEND? (see this blog post by Vijay Sharma)

BTE sucessor should be the newly released RAP Events AFAIK, but the question remains, how fast this will be adopted in the individual areas...

Thanks for this very informative blog.

What is the difference between 'ABAP for Cloud Development' and 'ABAP for Key Users'?

'ABAP for Cloud Development' and 'ABAP for Key Users' are explained in detail in the following blog posts:

So if I want to use it in a S/4HANA private Cloud system can I do this once the 2022 OP release is available? And in a greenfield scenario (where the realize phase has not yet started) it is SAP's recommendation to do so?!

I would assume that 'ABAP for Cloud Development' and 'ABAP for BTP' will have some differences. Embedded steampunk should have less restrictions, i believe, as it will be closer to S/4HANA. ABAP for BTP won't have any BAdI implementations or direct access to back-end released CDS views. As per my understanding, Embedded steampunk ABAP should be closer to ABAP for Key users. No?

I hope this clarifies your question.

For some detailed questions on ABAP language versions, the following FAQ might be useful:

Use this community to ask questions or to find more information about Embedded Steampunk.