Editing the mta.yaml File in the Low-Code Environment of SAP Business Application Studio

About me: I am a developer and one of the product owners of SAP Business Application Studio. I mainly focus on the contribution for low code development.

If you are working on the business application in the low-code environment in SAP Business Application Studio, I would like to show you a new cool feature introduced since Q2.

As we know, quite a few development tasks can be handled by the relevant low-code extensions behind the scenes, such as the mta.yaml file generation. There’s no need for the developers to maintain this deployment configuration by themselves, which is one of the major benefits of low-code development.

However, there are still scenarios where developers would like to manually do the tuning on some deployment configuration. Is it possible? How can you keep the manually changed configuration while the automatic content generation happens in the meantime?

The good news is the above case has been supported out of the box since Q2 in the low-code environment in SAP Business Application Studio. Let me show you how you can achieve it in this blog.

When you create a new low-code business application from the lobby, and do the deployment for the first time, the initial mta.yaml file will be generated in your application root folder.

If you would like to increase the memory parameter value for your deployed OData service, you could just manually change it to a new value, e.g. 512MB. Then this new configuration will override the existing value and could get deployed in the next deployment process.

It’s the typical scenario for most use cases. In addition, you can also delete or add a configuration directly to customize your own mta.yaml content.

The final deployment configuration is the merged result of both the manual edit values and the autogenerated content. Therefore, you may still encounter a scenario with conflict, although it’s not common.

Let me show you how the conflict could happen, and how you can resolve it. For example, you change the version value to a patch version 1.0.1 in the mta.yaml file.

You also change the application version to 1.1.0 in the package.json file for the next release.

In this case, a conflict will be detected when you perform the deploy action, and the error messages will be displayed in the Task: Deploy panel. 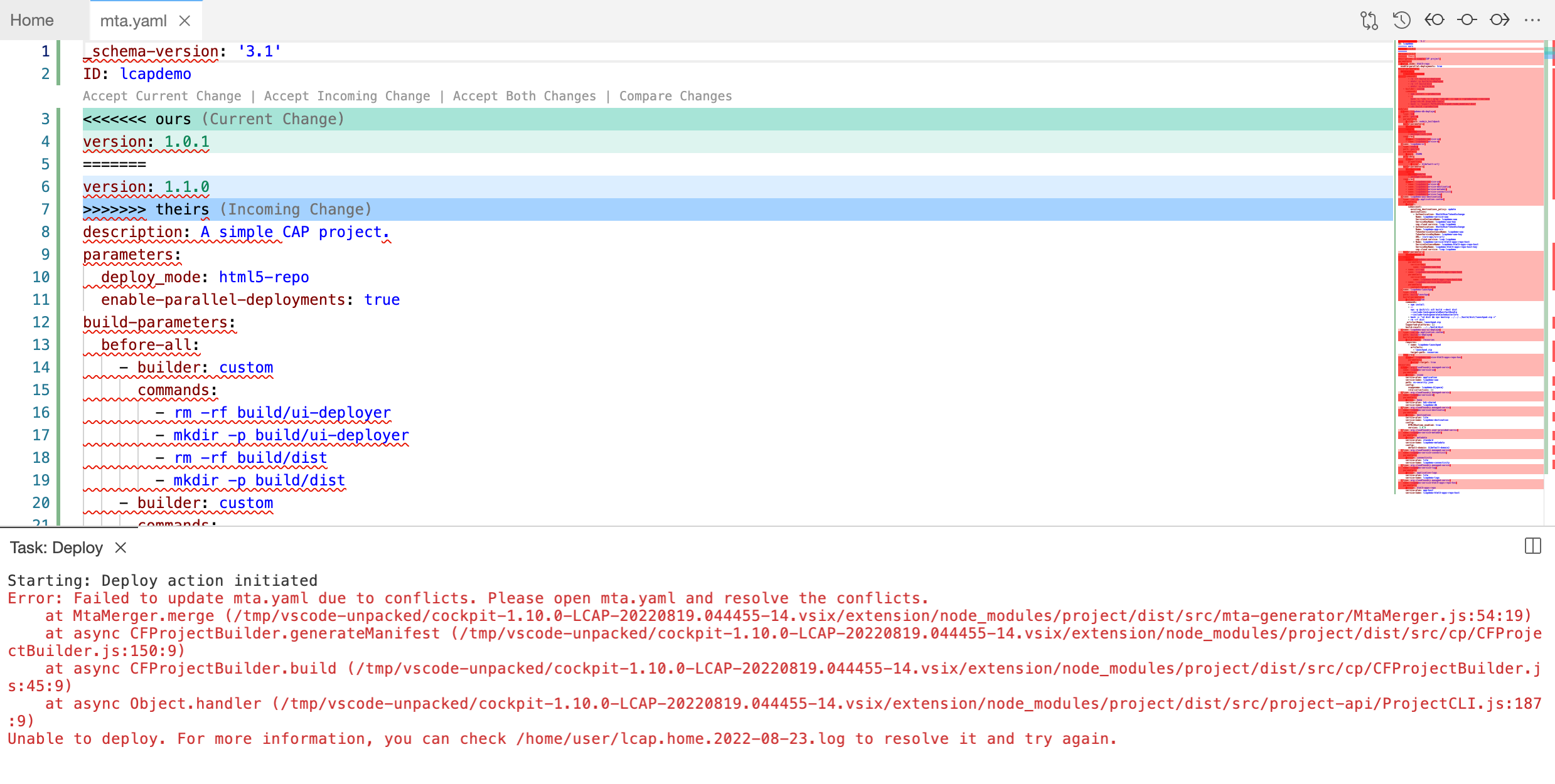 You can open the mta.yaml file again to resolve the conflict manually by choosing one of the four available options, such as Accept Incoming Change.

The conflict will then disappear. You can go ahead to stage the resolved content to be ready for the next Git command as usual in SAP Business Application Studio.

And finally, this application could be deployed successfully without any conflict error.

That’s all for this enhancement on the manual MTA editing ability in the low-code environment in SAP Business Application Studio. Hopefully it can accelerate your development and make your life easier.

For upcoming releases check out the public Roadmap. And follow our tag to receive all the SAP Business Application Studio content.