This blog series is mainly targeted for developers and administrators. If you are someone who has gone through the plethora of tutorials, documentation, and presentations on security topics in SAP BTP and still lacks the confidence to implement security for your application, you have come to the right place.

In this blog series, you will learn:

For ease of reading, I have split this in multiple blogs, which are:

What are we going to learn in this blog?

In the previous blogs, we learnt how to implement authentication and authorization to a Node.js app and deploy/run it to SAP BTP Cloud Foundry.

For we developer, the first question that comes to our mind probably is –

How to run your BTP application locally before deploying to cloud?

We developers love to debug and run things locally before deploying to server. 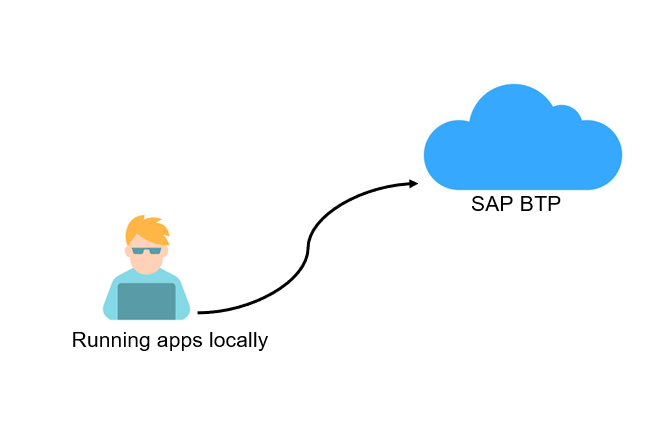 In this blog, we will learn how to run the Node.js application locally in SAP Business Application Studio. Even for a CAP application, the steps would be similar.

In the previous blog, we implemented authentication and authorization in a Node.js App. We will use the same application for this hands-on.

A high level Overview of the scenario 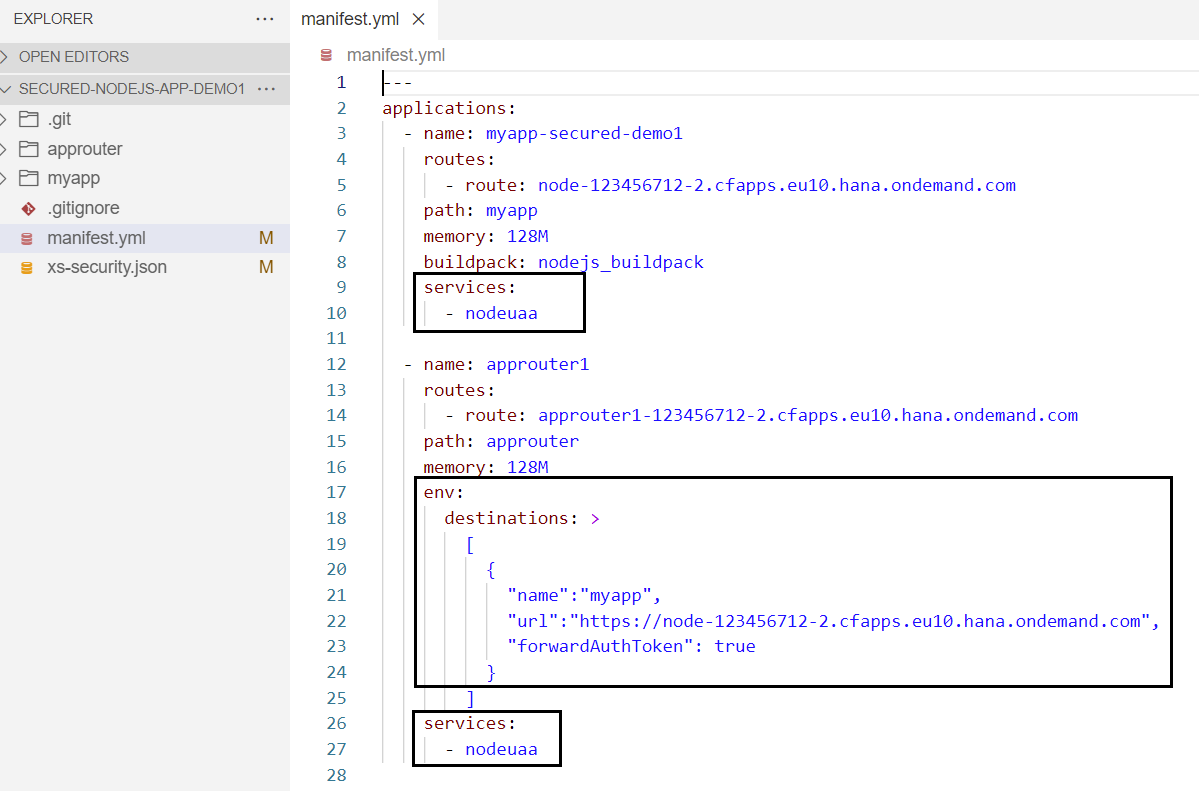 What’s the issue when we run the app locally?

manifest.yml is used during deployment and a destination is created in the Cloud Foundry. When we run app router locally, there is no destination created using manifest.yml file.

Similarly, there is no XSUAA instance locally.

So how do we fix it and run the app locally?

The app router has a built-in support to run locally. App router can

We need to create following files:

Note that both app router and application is bound to XSUAA, hence we need default-services.json  file at both places.

These file may contain confidential information. Hence include these files in the .gitignore. This will make sure that we don’t push this file to Git repository.

The files and folder structure is shown below. 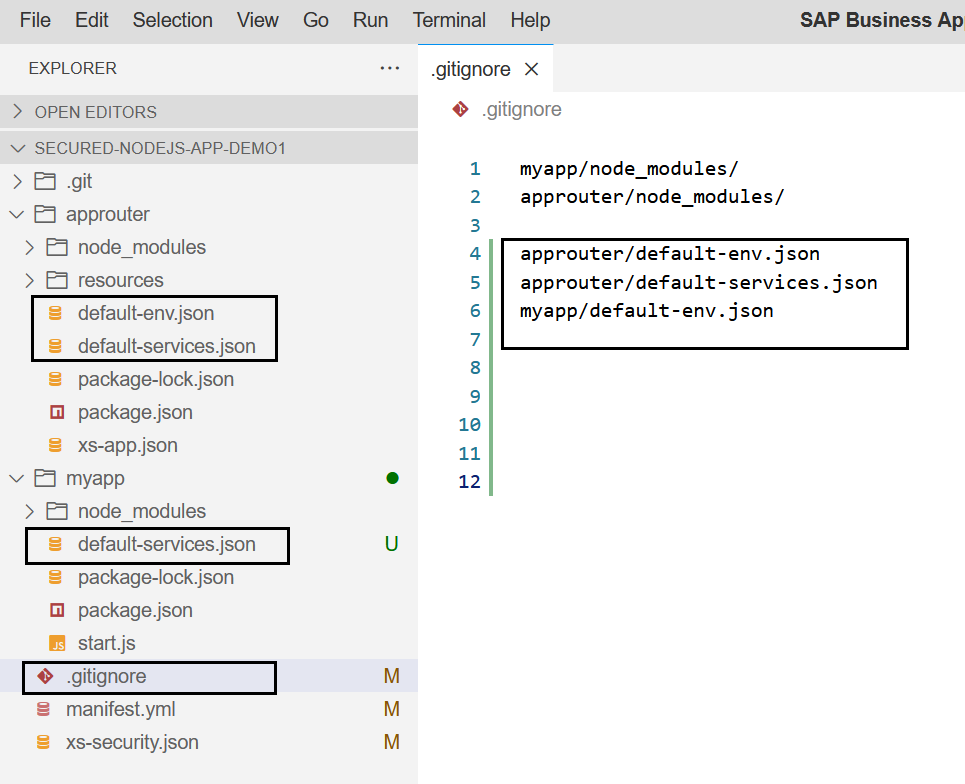 Open Terminal and run below command to install the dependencies.

Next, run below command from myapp folder to run the application.

Obviously, this will fail. You will get an error message similar to below. It’s because the app is looking for XSUAA service instance and it’s not available locally.

To fix this, we need the XSUAA environment variable details and add that in default-services.json file.

Run the below command to get the environment variables and their values. Note that the last parameter in the command is app router name defined in manifest.yml file. 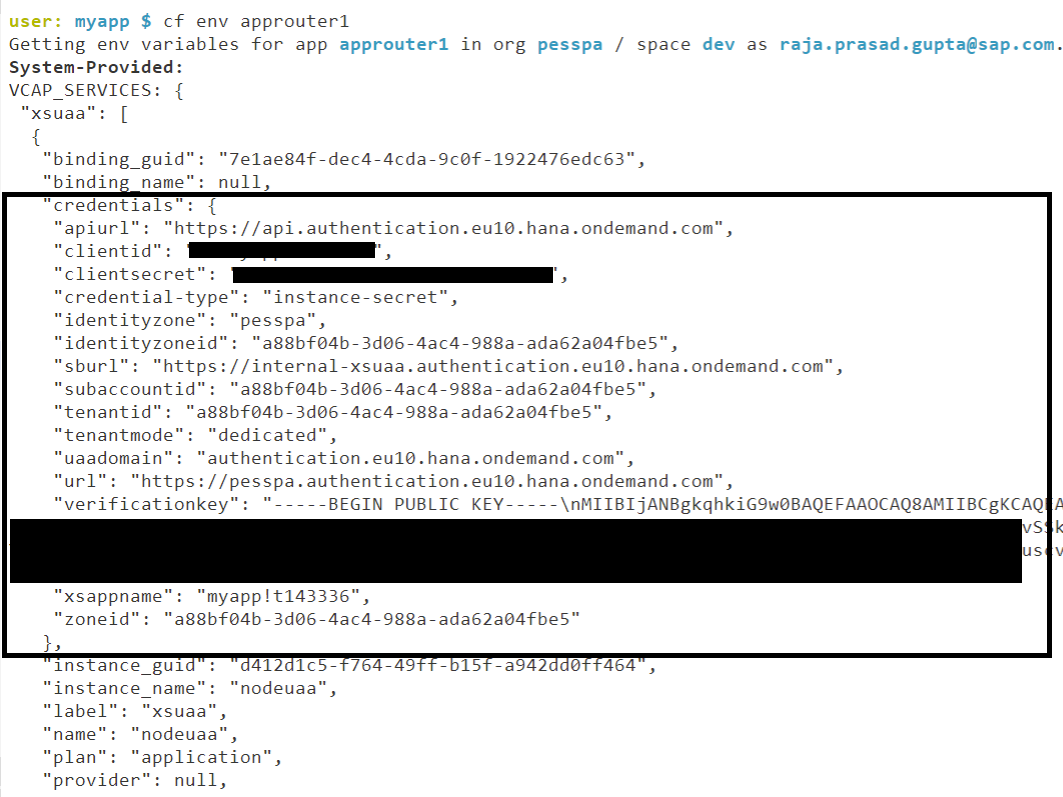 Open myapp/default-services.json file and create a JSON entry as below:

Paste the value of credentials JSON object you copied in the <> placeholder.

Here is a snapshot of default-services.json file 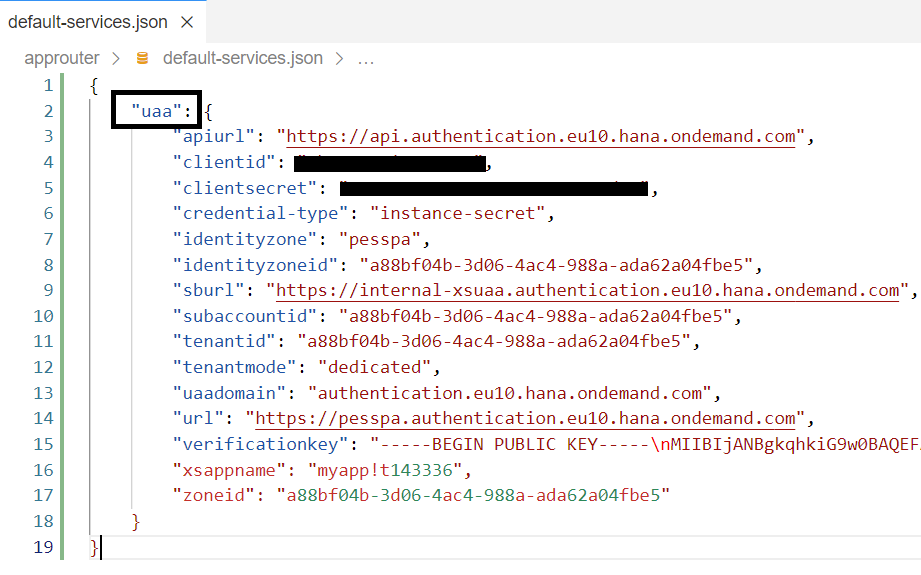 Copy the same content to approuter/default-services.json file as well.

Instead of running cf env command, you may copy the values from BTP cockpit, as shown below. 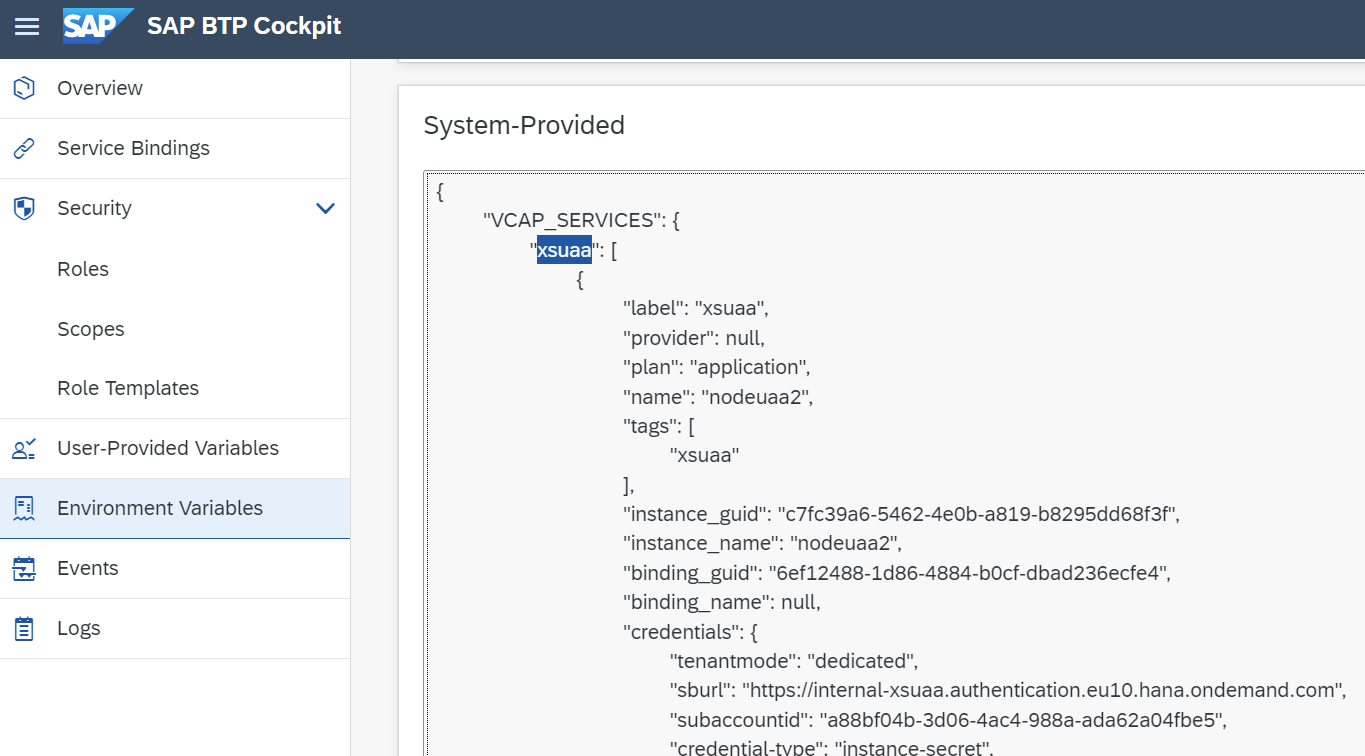 TADAA…it works. You will get the app running message as below.

You can check the myapp application running locally.

Of course it will give “Unauthorized” error message because that’s how we have designed.

Remember, the application can only be accessed via App Router. In case of any doubt why this “Unauthorized” error message is coming, check the previous blog Implement Authentication and Authorization in a Node.js App

Keep this application running. For next steps, open a new terminal.

Open Terminal and run below command from approuter folder to install the dependencies.

Next, run below command from approuter folder to start the app router.

Obviously, this will fail. You will get similar error message as shown below. It’s because the approuter is not able to find the destination called myapp. 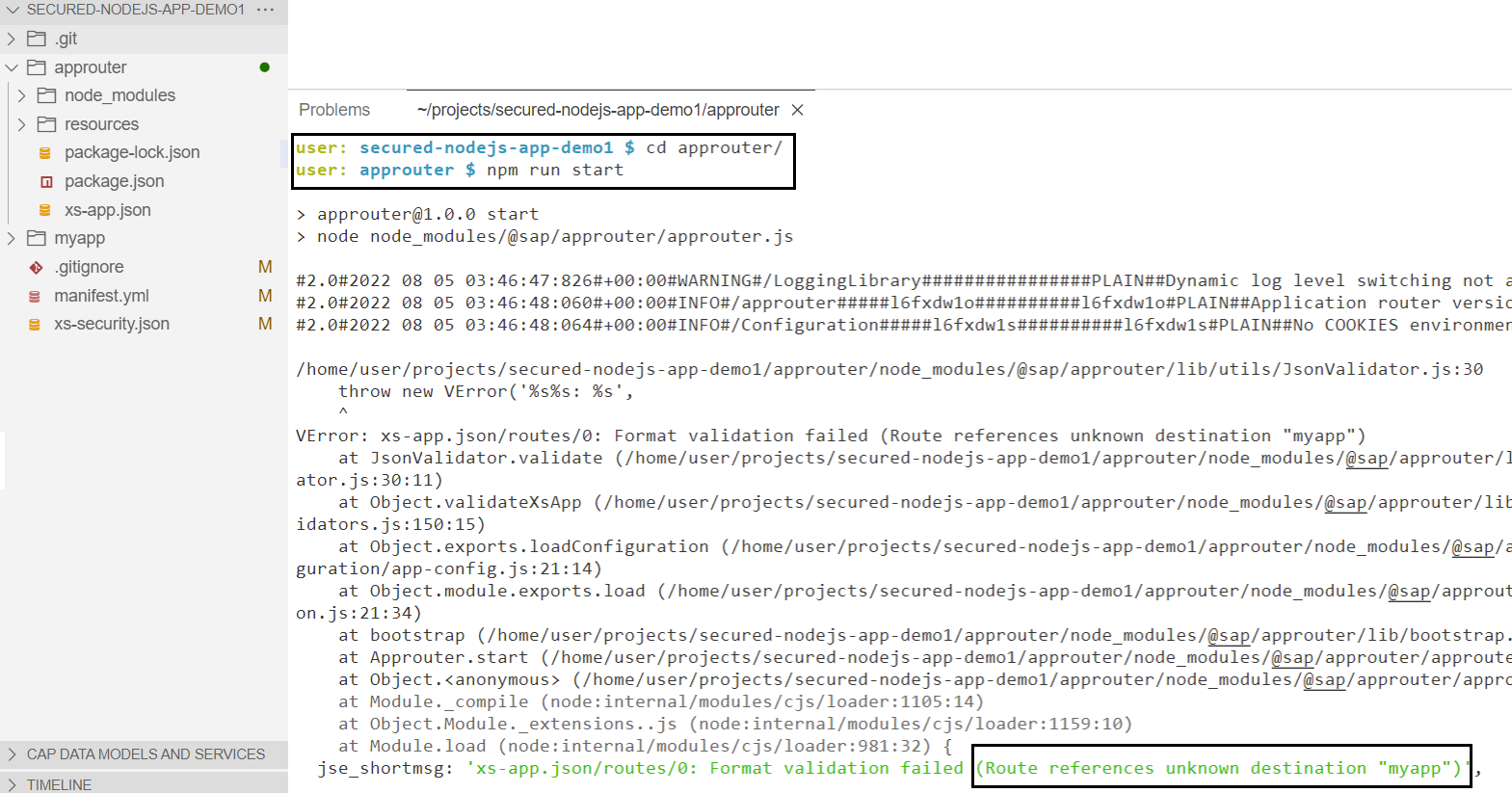 Open file approuter/default-env.json file in the approuter folder and copy paste below content.

This will create the destination for local testing. Not that the destination is pointing to http://localhost:4004, the same port where our application is running locally.

Run below command from app router folder to start the approuter again.

This time, app router will start. But when you try to access the app, it will give another error message as below.

In the browser where app is running, you may get error message similar to  – “The redirect_uri has an invalid domain.”

Let’s fix the error – “The redirect_uri has an invalid domain.”

Open xs-security.json file and add an entry called oauth2-configuration as below.

You may have to adjust the region specific part (eu10) of the URL – https://*.eu10.applicationstudio.cloud.sap/**

We need to update the XSUAA instance to get this change incorporated. Run below command from root folder to do the same.

Voila! It works now. You can see the application running locally.

Running an app locally is extremely helpful when we do development. It helps us save lot of time. If you observed closely, we achieved a hybrid approach. While the app router is running locally, XSUAA service instance is running in cloud. The target endpoint (the micro service) may run in local server or cloud.

If you have any question, let me know in the comment.