Lookup tables and the Wildcard Character

Lookup tables are used very frequently in both the Compensation and Variable Pay modules to pull non-employee data into worksheets – budget percentages is the most common use, but certainly not the only one. Often times, the Wildcard Character ‘*’ is used in an input coluimn. However, it might not work quite how you think.

While this is technically true, it is important that the Wildcard Character doesn’t override exact matches – so a wildcard in the first row might be overridden by an exact match in a lower row. 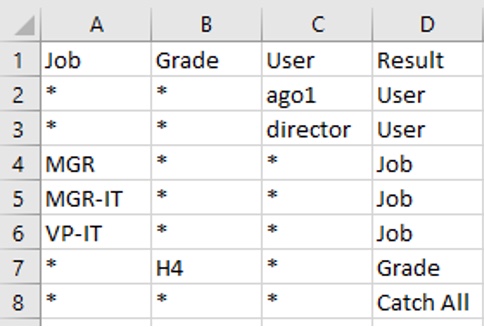 if there is a column with the following formula:

I would imagine that most consultants, given the data in Sandy Ago’s record, would assume that the lookup statement would return “User”, as the first row of the lookup table ( *, *, ago1) would appear to match. However, since there is an exact match of Job (MGR-IT) in row 5 (and the rest of the row matches with its wildcards), then that row is pulled from the table. Basically, “MGR-IT, *, *” trumps “*, *, ago1”, even though they both technically match.

If you change the table to this: 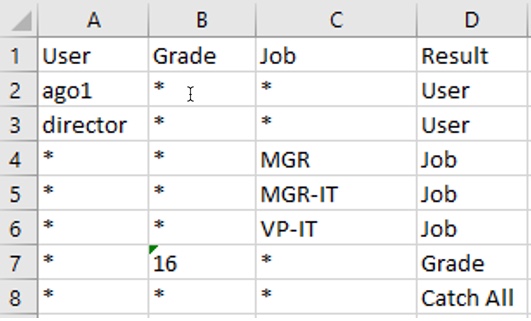 then you get the following results:

When using wildcards, the order of columns matters. If the first column is to contain wildcards, be careful to put the most “exact” matches at the top of the lookup table.

Many thanks to Skip Jones for doing the research upon which this blog is based.