Sven Denecken, COO of SAP S/4HANA and head of product success did the course introduction video.

For SAP Fiori apps that are shipped with SAP S/4HANA Cloud, you can adapt those screens with SAPUI5 flexibility. In the final week of the course, you’ll learn how to extend a standard SAP Fiori app to meet your specific needs using SAPUI5 flexibility.  In this way, you’ll gain a full understanding of how to adapt any screen you encounter in your SAP S/4HANA Cloud system. Here is some of what we will cover: 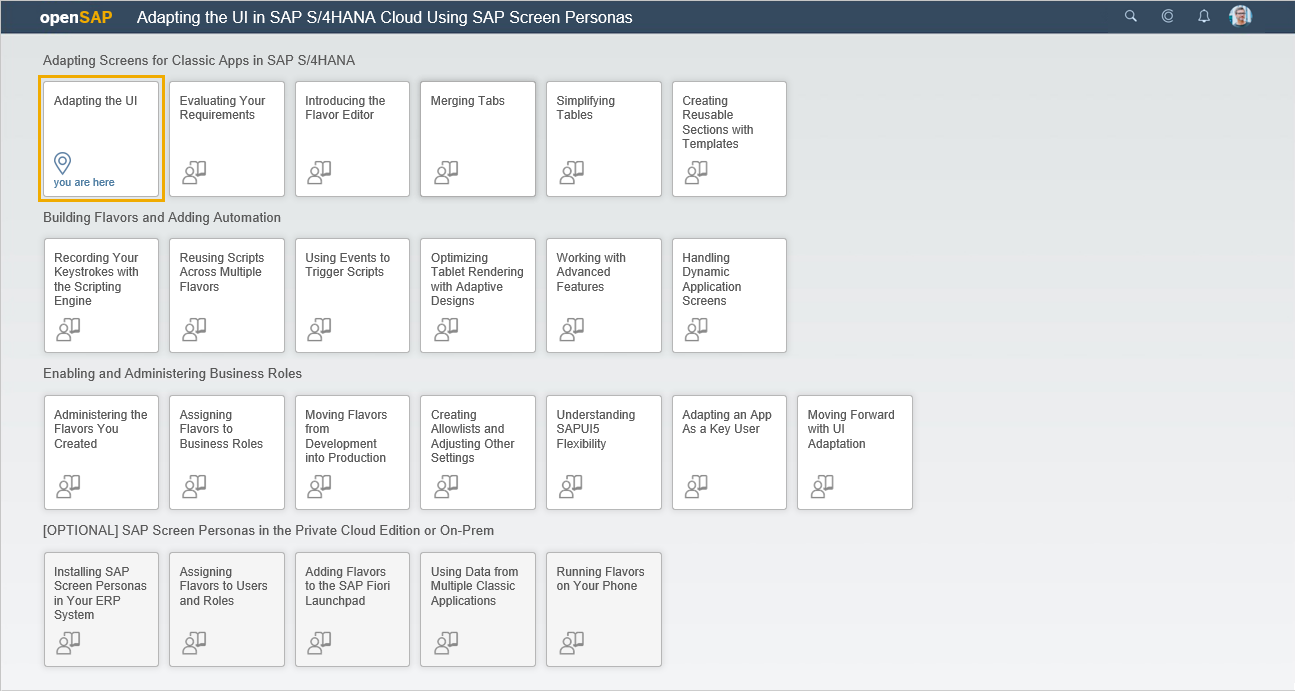 The course runs three weeks with an optional week for customers that run SAP Screen Personas in on-prem environments.

The final exam covers only weeks 1-3.

Behind the scenes in the course development

We followed the lessons we learned from creating previous openSAP courses, which helped us minimize the amount of rework during the course development process. This time, we finalized the unit names in the planning document before creating the slides. It was much easier to make several updates in one Excel worksheet than in 24 separate PowerPoint files.

The recording setup was a bit more complex than in previous courses. Pre-2020, we recorded all the units in a studio using specialized equipment with experts capturing the video and audio. As a presenter, I could focus on my content and leave the production to the professionals. During most of 2020-2021, we did all remote recording. The openSAP team provided detailed specifications for everyone to use at home. Some of my recordings from that period had a bed sheet as the backdrop in my garage. This course used a hybrid approach. Units were recorded in various settings, including using iPhones in the office. Making all this consistent added another burden to the production team.

In spite of our careful planning, we still encountered some issues (which the exceptional team smoothed out).

One thing that make the course development fun and very rewarding was working with such a talented group of colleagues.

In addition to the faces you see in the course videos, there were several colleagues that were instrumental in creating the course and bringing it to you.

We hope you enjoy taking the course as much as we enjoyed creating it. Please register now: https://open.sap.com/courses/sps5

We’ll see you online in the forums starting in September.