My name is Man-Ted Chan and I’m from the SAP HANA Development team. I’m writing this piece due to an increase of requests where SAP HANA Cloud users are finding their DBADMIN user needing to be unlocked.

The DBADMIN user becomes locked after several consecutive failed logon attempts. This situation regularly occurs after a password change and there are old apps or scheduled jobs attempting to run multiple times using the old password and locking the user.

First, it should be discussed what exactly is the DBADMIN user. The DBADMIN user is a super user that has all the privileges to make major changes to a database. It is suggested that the DBADMIN user only be used to do your initial administrative tasks. Having the DBADMIN user do everything renders auditing and most security tracking useless.

Rather than using the DBADMIN user to do daily tasks, create new users/groups to do specific tasks. Though this adds some extra steps before you can start using SAP HANA Cloud, it’ll save you from production down time when the DBADMIN user gets locked ☹

In the SAP BTP Cockpit, go to your SAP HANA Database Instances 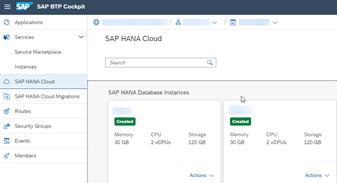 Enter in the login information

From the SAP HANA Cockpit, under the ‘User & Role Management’, we can create and edit users, groups, roles, and privileges. 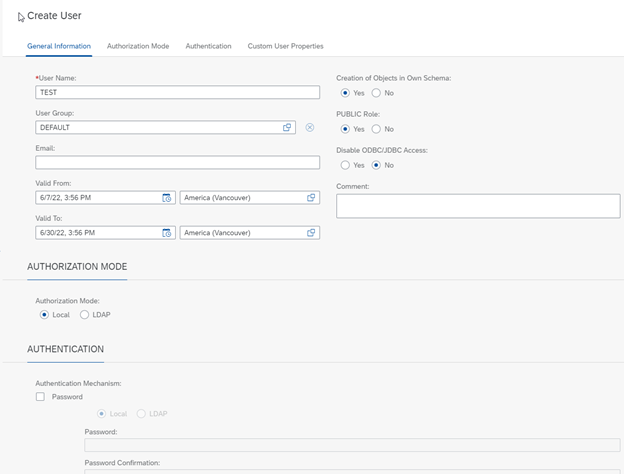 In BTP cockpit we could assign users to a group allowing admins to maintain user permissions as one group rather than individually (designer group, debugging group, admin group, etc).

Below are the steps to create a new group and add our “TEST” user to the new group, “TESTGROUP”

You can access the User Group via the BTC cockpit 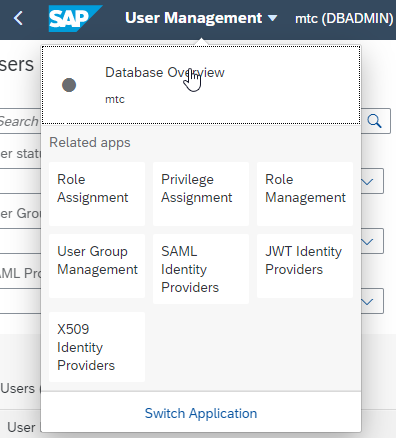 Once in the User Group Management page 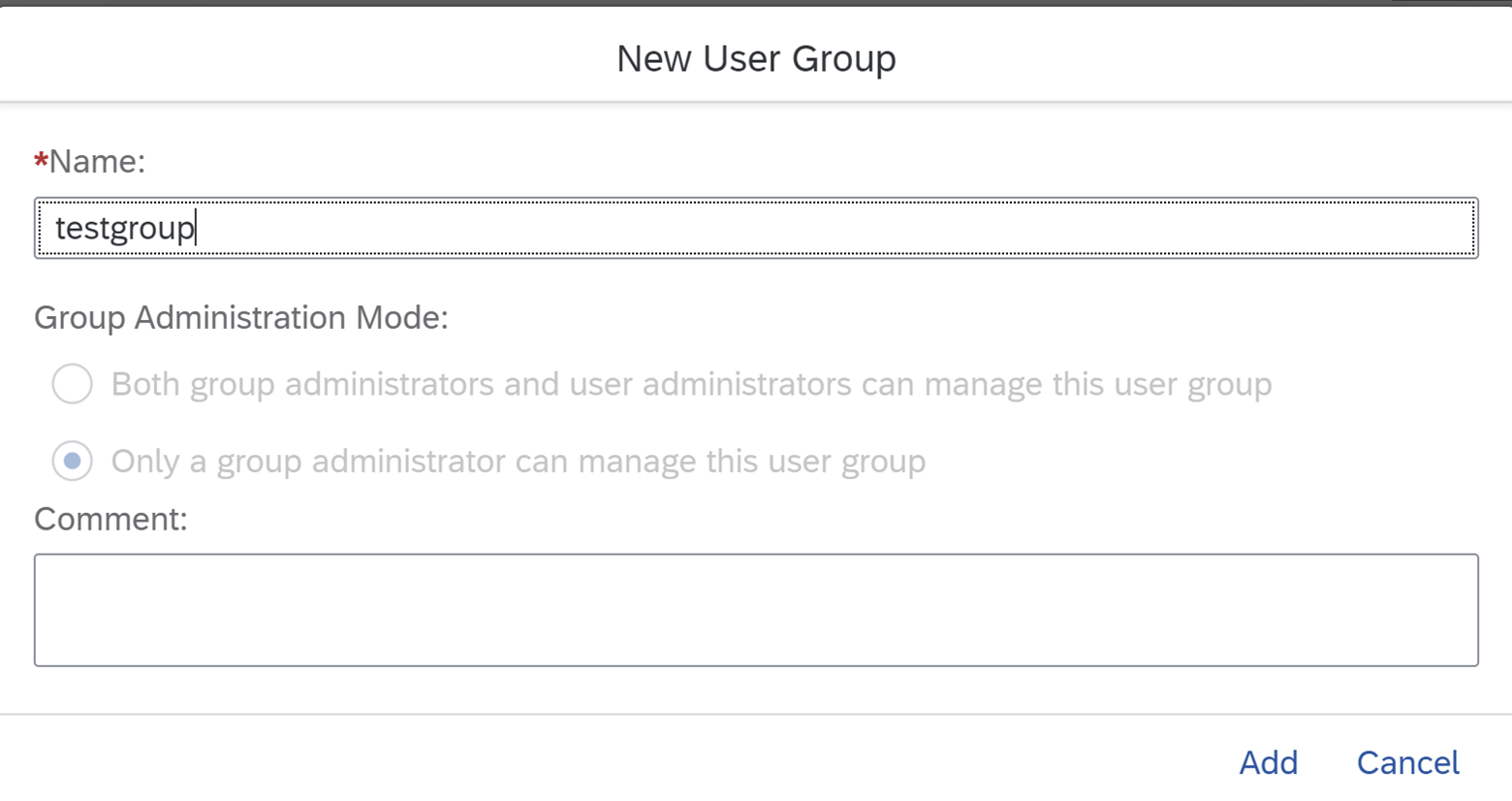 A role is a collection of privileges that can be granted to either a user, user group, or another role.

In the Role Management page press the ‘+’ button

You will be prompted to create a role 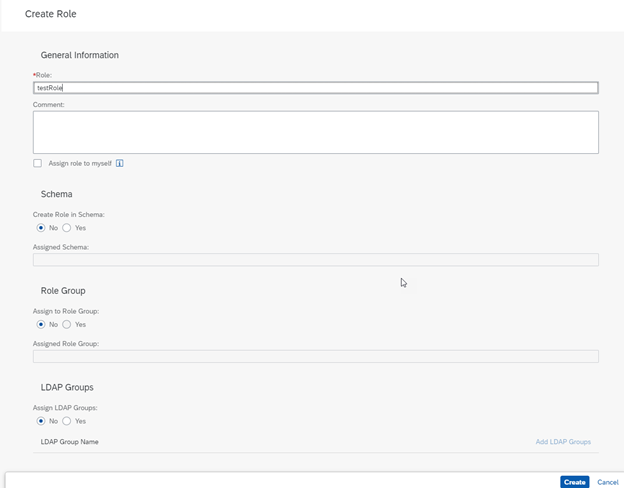 Once created, press the edit button to add your desired privileges

In ‘Role Management’ role groups can be made

When pressing the add button a popup of available roles appears 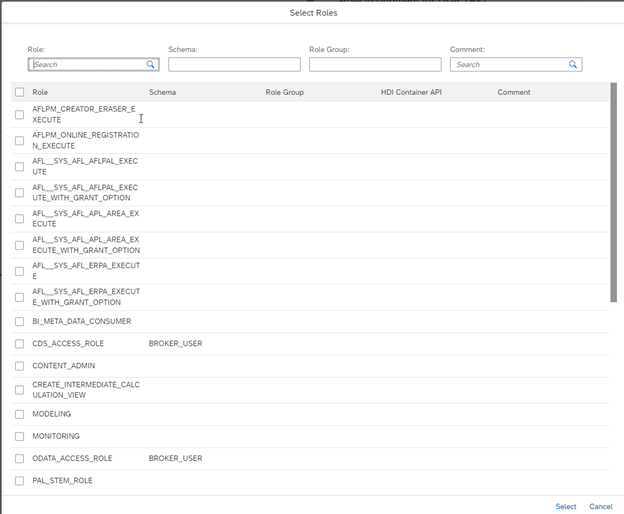 In role assignment you will assign your roles to your user

When ‘Assign roles to a user’ is selected you will enter in a username and assign that user with your desired roles. In the below example we will be using our “TEST” user 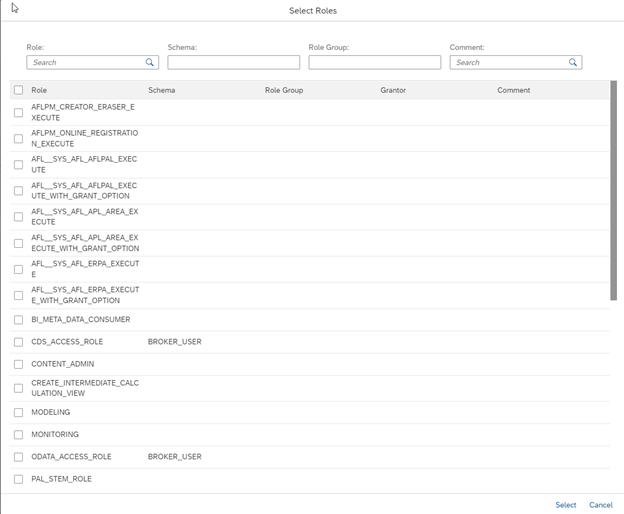 In the following example we will select ‘MODELING’ then press ‘Select’

Press the ‘Save’ button when done.

Assign A Role To Multiple Users

If you select ‘Assign a role to multiple users’ in the search you would enter in a role, such as ‘PUBLIC’ and that would display all the users who are assigned ‘PUBLIC’

Press ‘Edit’ and this allows you to added or remove users

In ‘Privilege Management’ enter in your object of choice to add privileges to, in the below example we are displaying the privileges of the DBADMIN user.

Once you have setup your required users and groups it is best-practice that the DBADMIN user is deactivated to avoid anyone logging in as a user with super user privileges. To do this, the user is needs to have object privilege OPERATOR for the DEFAULT user group.  Below are screen shots on assigning the privileges to the above user and then deactivating DBADMIN user. 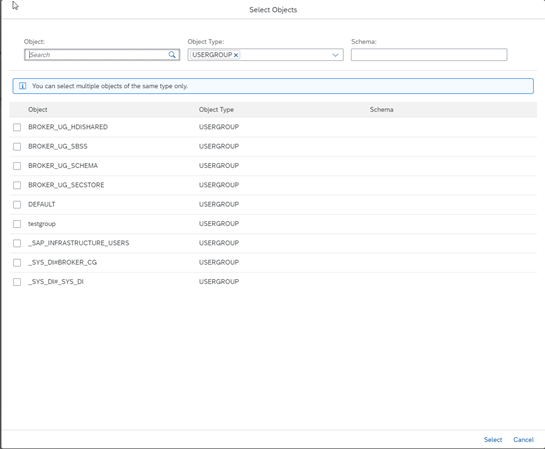 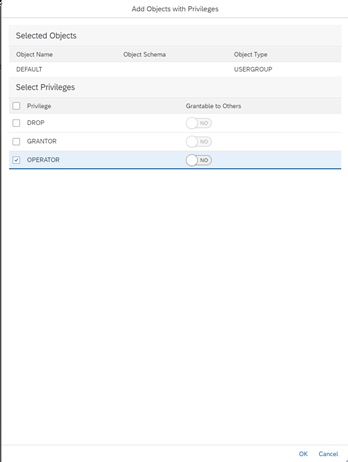 Now that the permissions are assigned to the TEST user, login as the TEST user and return to the ‘User Management’ page and select the DBADMIN user

Please note the DBADMIN user cannot be deleted and if attempted, the following message would appear