CDS projection views are the top-most layer of a CDS data model. They expose data of an underlying CDS data model for a dedicated use case. They correspond to consumption views that make up the C-layer in the Virtual Data Model (VDM) that is used within S/4HANA.

Different kinds of CDS projection views are available. Each comes with its own feature set and its own syntax checks, designed for a dedicated purpose. The type of projection view is specified using the syntax statement PROVIDER CONTRACT.

The following types of CDS projection views are currently available:

CDS transactional queries are intended for modeling the projection layer of a RAP business object in the context of the ABAP RESTful Application Programming Model (RAP).

Role of a CDS projection view of type transactional query in a RAP business service: 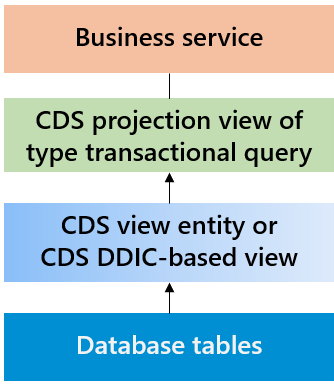 CDS transactional interfaces are intended to serve as stable public interface. They should be released for developer extensibility under a release contract (C0 or C1) and they provide the basis for a RAP BO interface in the context of the ABAP RESTful Application Programming Model (RAP). The feature set is restricted to projection elements from the underlying projected entity. No new associations, virtual elements, or fields can be defined.

Position of a CDS transactional interface in a CDS data model:

If no provider contract is specified…

Questions, comments, or further details required? Use the Comments section below. Discussions are welcome.