This blogpost has been inspired by a real use case and feedback provided by a client who uses SAP Business Technology Platform (SAP BTP). I was excited to see how our SAP BTP services bring value to our customers in a real life, in their day-to-day work so that the positive feedback we received after our customer interactions was more than valuable to me and I’ve decided to share it with all of you.

Our team was contacted by a Customer Success Partner as there was an SAP client who uses SAP BTP but who was also uncertain on how to achieve a specific automation for its repetitive SAP BTP resources management activities. If we go in further details the client was keen to find out if possible, to automate the process of provisioning new SAP BTP resources for their demo / test / PoC purposes such as:

Ideally, the team had to be able to trigger (upon a specific request) an already predefined command which is to complete all previously listed tasks.

Based on the requirements and client’s expectations we were confident we can achieve all of that using the SAP Automation Pilot as it is a powerful tool to automate your work and activities in SAP BTP .

Our approach was to focus on the already available capabilities for setting the script needed by using existing scripting capabilities but also reusing as much as possible from SAP Automation Pilot built-in commands (see the diagram below). In a nutshell, the use case can be covered by:

Doing so we were planning to implement an automation engine that is to cover the entire use case as visualised in the diagram shared underneath: 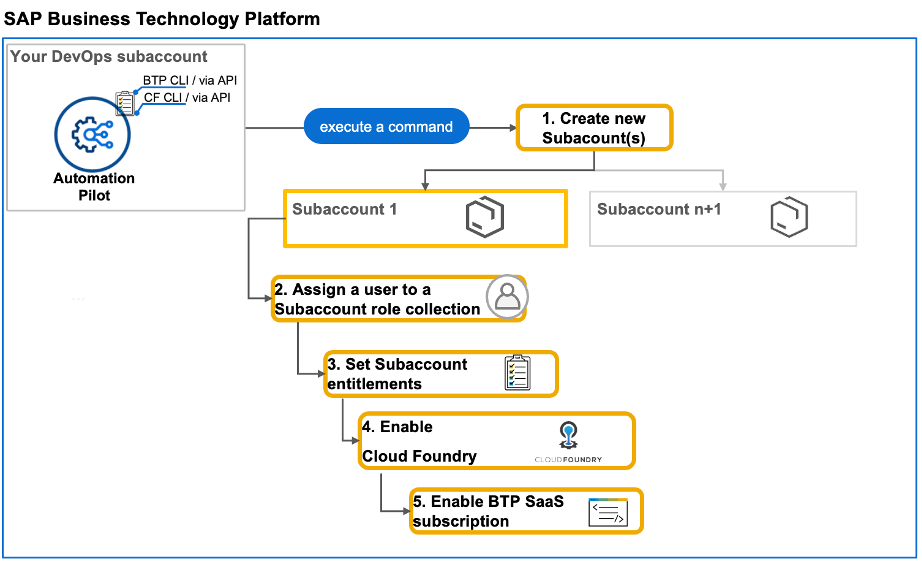 We followed the designed approach, and the output was quite good. We were capable to demonstrate to the client that the whole use case and scripts needed for its execution could be built and executed via SAP Automation Pilot with a minimum technical knowledge. On top of it, our service also brings a nice user experience as the entire command needed for the use case can be broken down, composed, and visualised in SAP Automation Pilot UI as smaller sub-sets (building blocks) – please feel free to see some examples below.

After running the demo the feedback collected was that the client was keen to use SAP Automation Pilot and get the most out of the BTP Ops Automation capabilities available through our services.

As of end of May 2022 we delivered to production two commands related to the SAP BTP resource management (“Create Subaccount” and “Set Entitlement”) as part of our SAP Automation Pilot Provided Commands so we look for further cooperation and more success stories to be shared.

Furthermore, in case you have any potential ideas for other use cases or any needs about Ops Automation – please do not hesitate to write a comment or contact me.

Thanks for bringing the SAP Automation Pilot capability to light.  To extend on the use case above, automation of the following processes would be very beneficial: