The Internet of things (IoT) describes the network of physical objects—a.k.a. &quot;things&quot;—that are
embedded with sensors, software, and other technologies for the purpose of connecting and

exchanging data with other devices and systems over the Internet.

The Internet of Things possesses potential to create vast economic impact of up to $6.2 trillion
annually by 2025, according to a 2013 study by McKinsey Global Institute.

Now the question arises how IOT could be seamlessly integrated with SAP CRM Services. Real work
Scenario will be reiterated later but before that just to give first hand knowledge of IoT.

Just like Internet has changed the way we work &amp; communicate with each other, by connecting us
through the World Wide Web (internet), IoT also aims to take this connectivity to another level by
connecting multiple devices at a time to the internet thereby facilitating man to

machine and machine to machine interactions.

People who came up with this idea, have also realized that this IoT ecosystem is not limited to a
particular field but has business applications in areas of home automation, vehicle automation, Here, 4 fundamental components of IoT system, which tells us how IoT works.

i. Sensors/Devices
First, sensors or devices help in collecting very minute data from the surrounding environment. All of
this collected data can have various degrees of complexities ranging from a simple temperature
monitoring sensor or a complex full video feed.

A device can have multiple sensors that can bundle together to do more than just sense things. For
example, our phone is a device that has multiple sensors such as GPS, accelerometer, camera but
our phone does not simply sense things.
The most rudimentary step will always remain to pick and collect data from the surrounding
environment be it a standalone sensor or multiple devices. 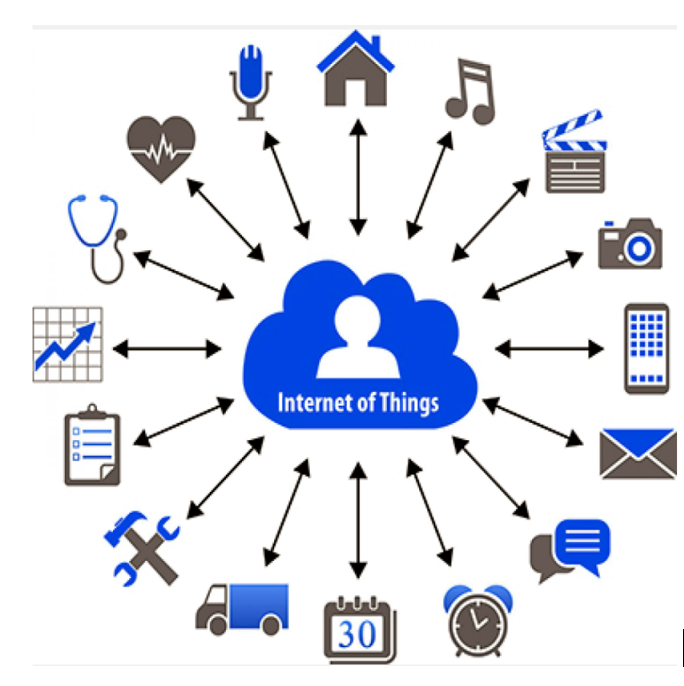 Next, that collected data is sent to a cloud infrastructure but it needs a medium for transport.

The sensors can be connected to the cloud through various mediums of communication and transports such as cellular networks, satellite networks, Wi-Fi, Bluetooth, wide-area networks (WAN), low power wide area network and many more. 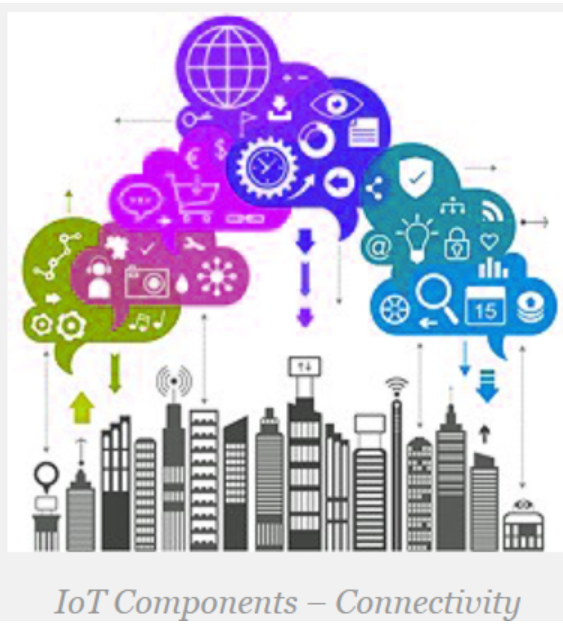 Every option we choose has some specifications and trade-offs between power consumption, range, and bandwidth. So, choosing the best connectivity option in the IOT system is important.

Once the data is collected and it gets to the cloud, the software performs processing on the acquired data.

This can range from something very simple, such as checking that the temperature reading on devices such as AC or heaters is within an acceptable range. It can sometimes also be very complex, such as identifying objects (such as intruders in your house) using computer vision on video.

But there might be a situation when a user interaction is required, example- what if when the temperature is too high or if there is an intruder in your house? That’s where the user comes into the picture.

Once the data is collected and it gets to the cloud, the software performs processing on the acquired data.

This can range from something very simple, such as checking that the temperature reading on devices such as AC or heaters is within an acceptable range. It can sometimes also be very complex, such as identifying objects (such as intruders in your house) using computer vision on video.

But there might be a situation when a user interaction is required, example- what if when the temperature is too high or if there is an intruder in your house? That’s where the user comes into the picture. 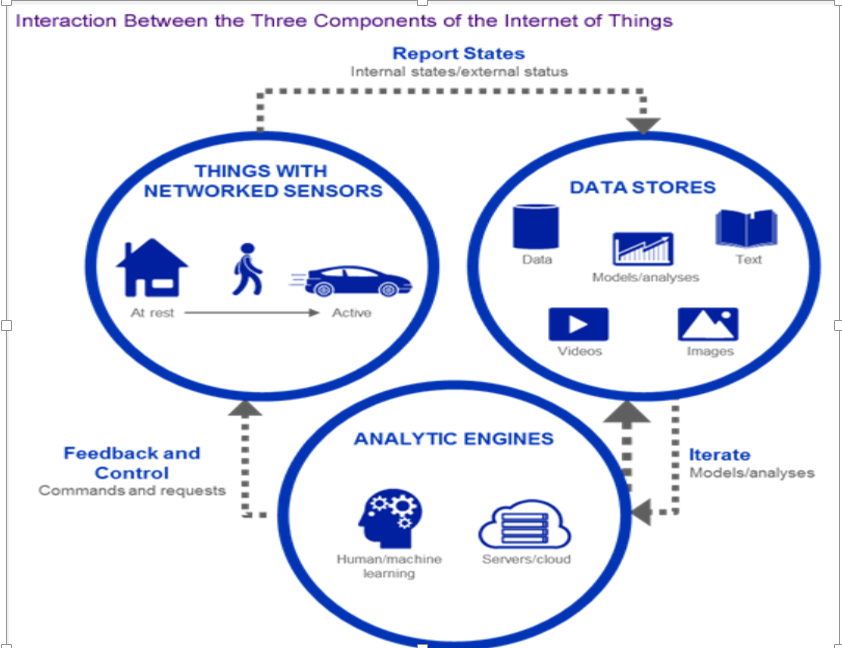 Next, the information made available to the end-user in some way. This can achieve by triggering alarms on their phones or notifying through texts or emails.

Also, a user sometimes might also have an interface through which they can actively check in on their IOT system. For example, a user has a camera installed in his house, he might want to check the video recordings and all the feeds through a web server.

However, it’s not always this easy and a one-way street. Depending on the IoT application and complexity of the system, the user may also be able to perform an action that may backfire and affect the system.

For example, if a user detects some changes in the refrigerator, the user can remotely adjust the temperature via their phone.

There are also cases where some actions perform automatically. By establishing and implementing some predefined rules, the entire IOT system can adjust the settings automatically and no human has to be physically present.

Also in case if any intruders are sensed, the system can generate an alert not only to the owner of the house but to the concerned authorities.

Now we have understood what IoT is and what are its capabilities and utilities. Lets have the real world scenario where IoT really helped the big real estate company based in Dubai UAE to innovate and improvise their complaint/request management system and enriched customer experience.

Line of business with the real estate company mainly pertains to lease and licensing (both office and residential spaces) of their massive properties base. The properties also have utility devices like Air conditioners, washing machines, microwaves, bathing heaters and so on. Most of time the customer interactions comes in forms of service requests/complaints pertaining to the functionality of these utility devices. In order to emphasize the importance of IoT we will be presenting the instance of typical customer interaction in case of Air Conditioner not working. Already company has SAP CRM service module and below is the flow chart how typical user interaction works and later we will be presenting the shortcomings and how the IoT helped in improvising the customer experience. 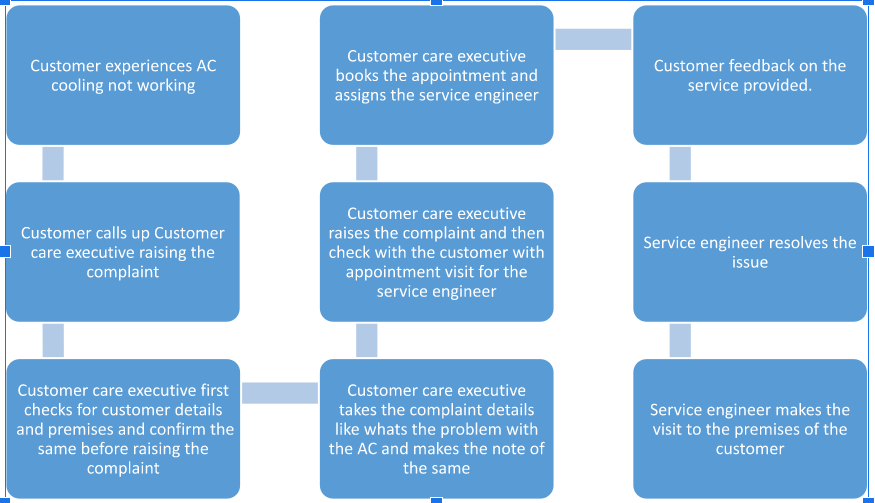 Well this looks simple and good to go. But its not always the case. The problem starts when customer interacts for the first time with the customer care executive and may get frustrated as customer care executive needs to ask barrage of questions pertaining to customer premises and problems being faced by customer. Now this could lead to customer frustration, which in turn may lead to impact on business as customer will share their feed back with future customers.

Now lets see the flow chart on how IoT improved the customer experience. 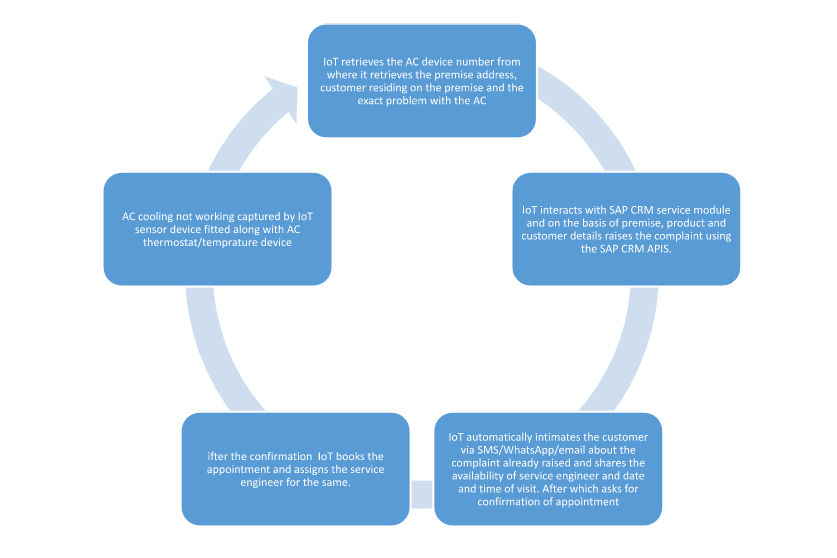 Difference in the process is imminent from the flow chart. So what did IoT achieved in a simple complaint process? Answer is simple it saved the time and effort of customer to interact with the customer executive and also provide cumbersome details pertaining to the device not working. In addition to the same it also speed up the complaint raising process and also assignment of service engineer along with the visit. Thus automation is the key area which IoT provides which in turn saves time and efforts. Now just imagine the delight of customer when he receives the automated interactive SMS/whatsapp/email asking for the confirmation of service engineer visit.

Now the question arises how IoT integrates seamlessly with SAP CRM service module. The answer is simple rest API interaction. SAP CRM existing BOL API’s can be easily integrated with IoT platform without much of development effort. Typical IoT architectural diagram is illustrated below(the one below is for integration with S/4 HANA which is easily replaceable with SAP CRM on premise system

In conclusion, Internet of Things is the concept in which the virtual world of information technology connected to the real world of things. The technologies of Internet of things such as RFID and Sensor make our life become better and more comfortable.

Well done Rajwin, so much helpful and informative post it is. In addition, best ever post that I read. and really help to enhance the knowledge about IoT.

Most of the people worldwide always looking for such blogs so that they can get the whole information about single topic on a single page.