On the 9th of June I attended the Developer Day to be inspired by the latest innovations by SAP. I joined the Business Technology Platform Track and enjoyed the following 3 amazing sessions:

Sometimes people wonder or ask, what are your takeaways of this session or event? Well, mine was a bucket list, cool stuff to try out myself!

I discovered new BTP services and received a know-how on how to start with these services.

The nice thing about these kind of sessions, is that often you go home with some interesting GIT-repositories or links to SAP Developers Tutorials or such.

I chose to start with the SAP Continuous Integration and Delivery service, since it would help me with a current project I’ve been working on.

I was quite thrilled to get started with the service, since I had the Configure and Run a Predefined SAP Continuous Integration and Delivery (CI/CD) Pipeline SAP Developers tutorial at my side.

The tutorial guided me through all the required steps and my first CI/CD flow with the SAP Continuous Integration and Delivery service was born.

I want to share with you the most basic ESLint example to get you started with this Lint Check option inside the SAP Continuous Integration and Delivery service its Job editor. We will create a Fiori Application, configure the CI/CD Job and ESLint configuration file. 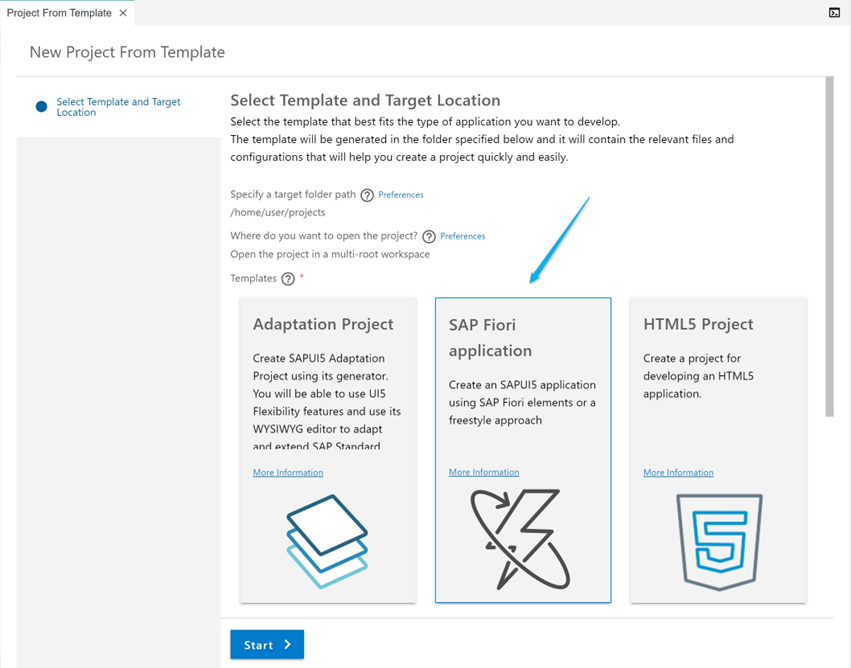 I configured my project attributes as such: 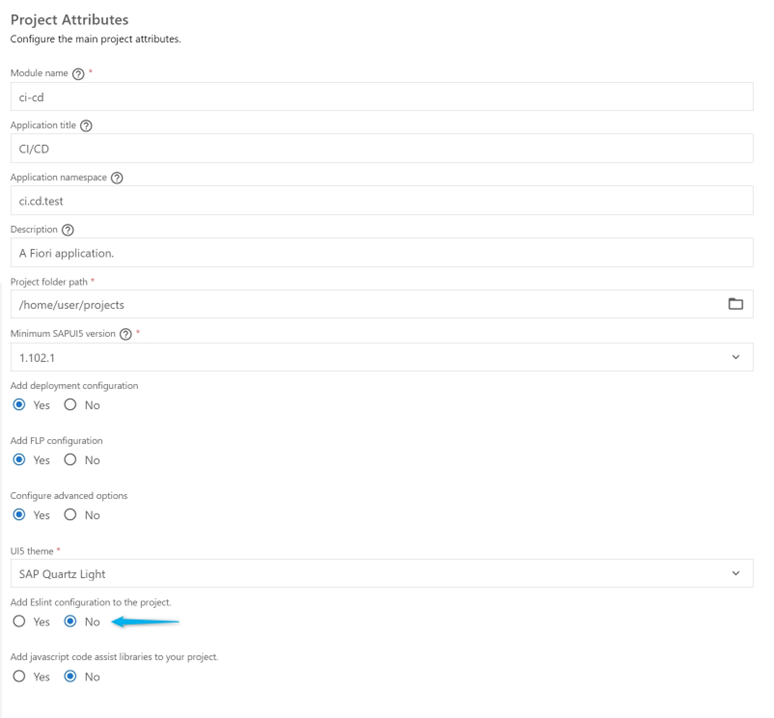 Do note that for demo purposes I did not add the ESLint configuration. We will manually add this afterwards.

I chose the Cloud Foundry environment as my target and added a Managed Application Router.

You can also generate your application with the Easy UI5 Generator, this will already contain a lot of tests and scripts such as Karma and ESLint. This eases the steps to be taken, but I would like to show the minimal setup for a Lint scenario in the SAP BTP CI/CD service.

In the SAP BTP CI/CD service I used the following configuration (.pipeline/config.yml) inside my Job together with the pipeline ‘SAP Fiori in the Cloud Foundry environment’:

The properties in this configuration file obviously map to the UI of the CI/CD Job configuration screen. The configuration above can be retrieved by pressing the “YML” button in the “Stages” section of your CI/CD job.

To install the ESLint npm package as a dev-dependency, execute the following command:

To create your .eslintrc file, which contains your ESLint configuration, execute the following command:

When running the command above, chose the following configuration options:

You will see that your .eslintrc.json file has been created with the following content:

The Lint Check will not find any errors, since no rules are configured.

Now let’s add the “no-debugger” rule and throw a warning when a “debugger” statement is found in the JavaScript files. Add the “es6” and “jQuery” properties to the “env” property as well, and “sap” and “jQuery” to “globals”.

The configuration file will look as such:

Now to test the job, add a debugger-statement inside your controller file like this for example: 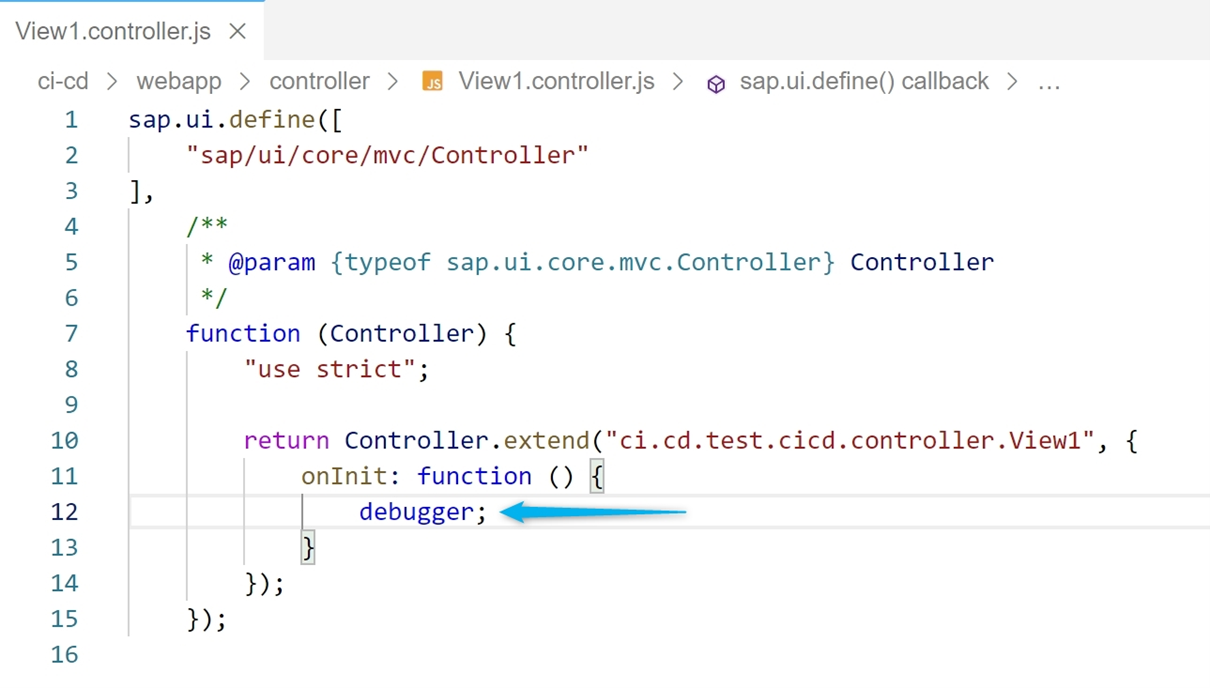 Delete the “Utils” and “test” directories inside your “webapp” directory and remove the “@param” line in your controller file. We only do this for demo purposes of course. The files inside those directories contain some special configuration, which requires some extra ESLint configuration, and we want to keep it basic. 😊

Double check in your CI/CD job that you have the “Lint Check” activated, as well as the “Fail on error” option.

Execute the following git command to add, commit and push the change to your git-repository:

As you can see the build passed successfully, as well did the deployment/release: 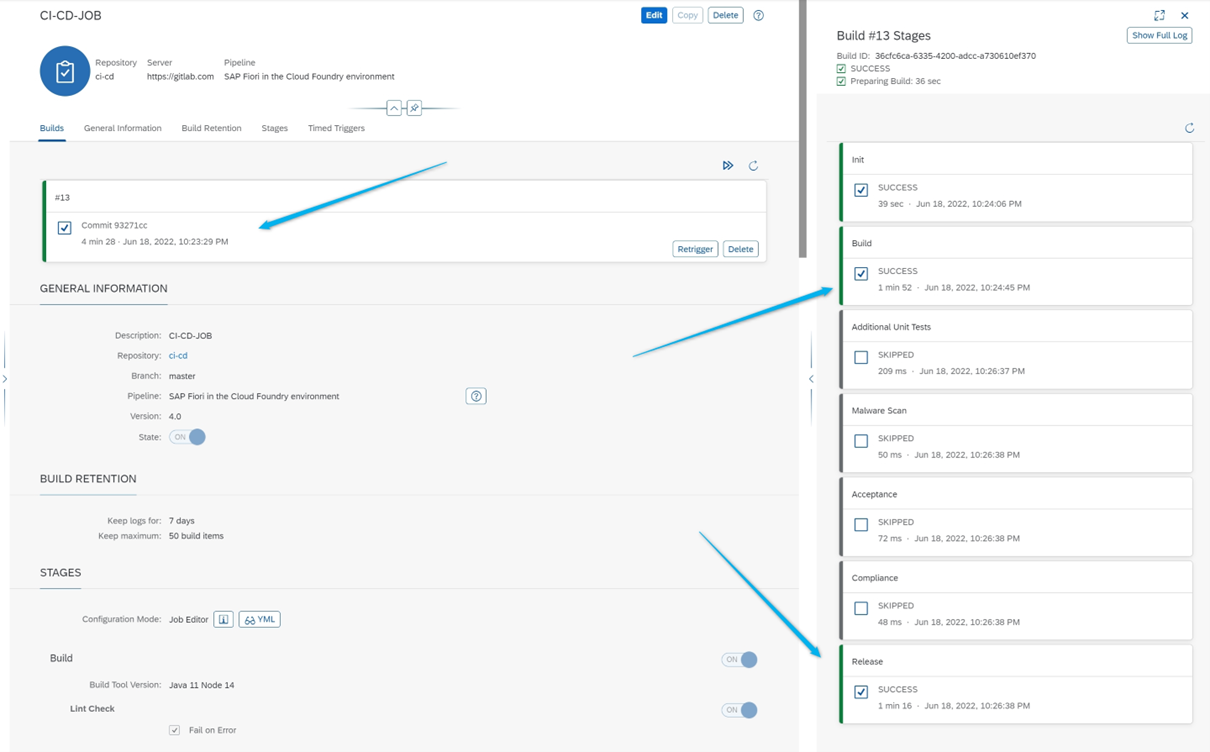 When you press the second block (Build) you can open the logs of the build process. Here you can see that the lint command was executed successfully:

Now change your “no-debugger” rule its value from 1 to 2 (error) and commit and push to your repository.

To see in which files warnings occurred you can scroll down and see that the controller file is mentioned. (the logs show an error ‘file not found’ since it cannot create a fingerprint for the file while searching for it. But the affected files regarding your lint check are the files mentioned here):

As we expected, the build failed because of the debugger statement: 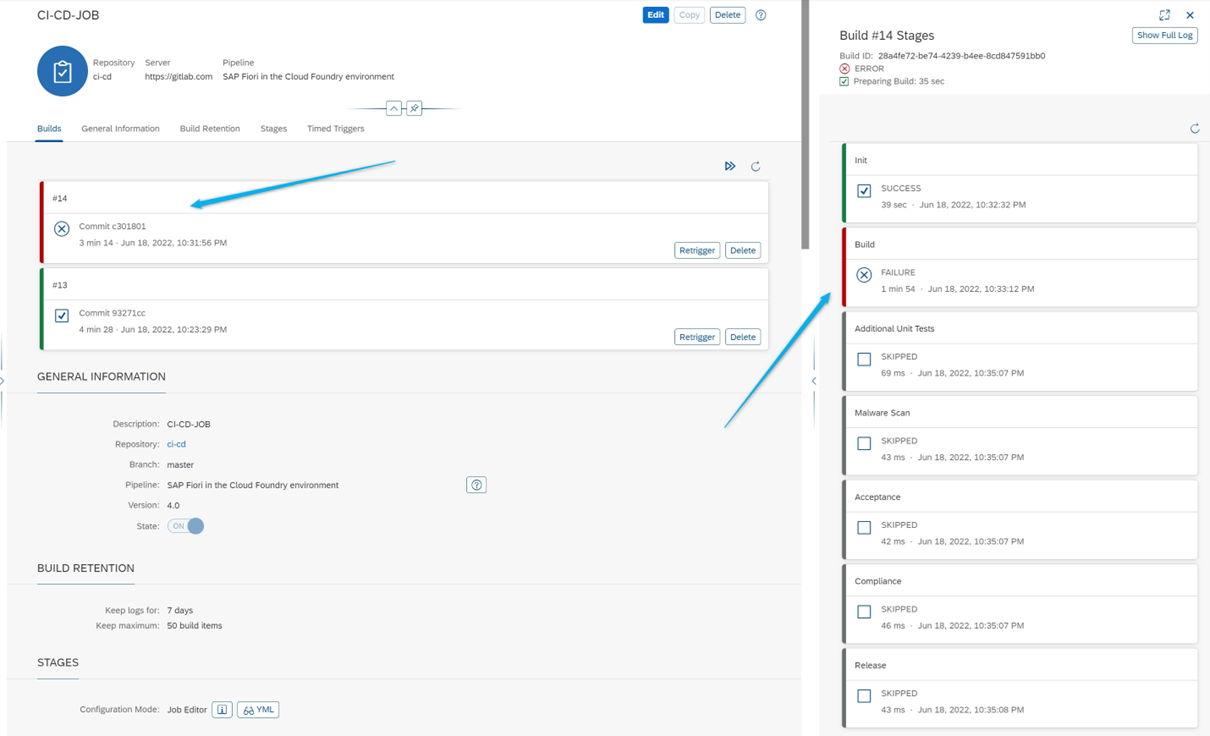 When you press the second block (Build) you can open the logs of the build process. Here you can see that the lint command was executed with errors:

To see in which files errors occurred, you can scroll down and see that the controller file is mentioned (the logs show an error ‘file not found’ since it cannot create a fingerprint for the file while searching for it. But the affected files regarding your lint check are the files mentioned here):

If you would test it with the rule “no-debugger” equal to 0 (off), you would see that the ESLint check is still performed, but the controller file is nowhere to be found in the logs, since the rule was not executed as warning or error.

Turning off the Lint Check in the CI/CD job would obviously prevent the job from executing the ESLint command.

Now give it a try with an extra rule in your .eslintrc.json file, regarding a console statement. The rule name is “no-console”, you know how to test around. 😊

ESLint checks being performed inside a CI/CD job is a very handy feature to guarantee or force clean code inside your project. When setting up a basic lint scenario it is not a steep mountain to climb indeed, but when you are struggling and not quite familiar with ESLint, this post might help you to take your first steps and gain some insights.

I hope this can help others building there first CI/CD Job using Lint Checks in the most basic way possible.

Feel free to share your experiences, tips, tricks, and corrections along. 😊