This blog describes the use of CamelFilename header while zipping the files using Zip function  in SAP Cloud Integration ,Build number 6.27.9 !

1.What if CamelFileName header is not set before the Zip function function.

Using FileName as ${header.FileName} without using .zip extension in the sftp adapter.

Let  us try to understand the first case. I have used a sample flow where a Xml  file is converted to csv and we zip the csv file and put it into the SFTP folder.

Using the Content Modifier : Setting the FileName we have created a header FileName

We set the FileName  in sftp receiver channel as ${header.FileName} [ Note we have not used the .zip extension]

When we try to hit the IFlow with XML, we have the following csv file in the sftp target folder.

We can see that the .zip type is missing in the file as well as when i tried to open the file it was corrupt. Actual Size of the Proper CSV file was about 237 Kb .. which we will see later .

Using FileName as ${header.FileName}.zip  in the sftp adapter

In this case you will have a zip file in the SFTP Folder, but  compressed file would have automatically assigned name with type as “File”.

When the target system unzips, looks up for a specific naming format , this could lead to problems as now  the actual intended filename pattern would become a folder under which the compressed file would be saved as type “File” with a automatically assigned file name.

2.What if CamelFileName header is set  before the Zip function

Now, i have changed the IFlow to set the header ‘ CamelFileName‘ before the ZIP function .

No FileName in SFTP Receiver Channel

When we try to hit the IFlow with XML, we have following zip file in the sftp target folder. Also the unzip file contains the same file name pattern as intended.

The explanation for above behavior could be due to the fact that  CamelFileName header is generated after zip compression and assigned a random value if not assigned before. I leave it upto the readers to build a basic flow and use simulation to understand the same.

One more behaviour is that CamelFileName header is lost when used in SFTP Adapter. I don’t have a concrete answer for that atleast now.

Govardanam Venkatesan , interesting blog post. I believe the explanation of the behaviour is explained in the Apache Camel documentation...

In the SFTP component documentation, it explains how setting up a value takes precedence over what is set in CamelFileName header - https://camel.apache.org/components/3.17.x/sftp-component.html#_endpoint_query_option_fileName.

Thanks  Antonio Maradiaga ! Behaviour with respect to ZIP function is understood in SAP CI . But further to enrich the CamelFileName header topic, let us take the below basic case, you can see that using content Modifier, before the zip function , CamelFileName header is set and also used  in the SFTP Adapter configuration! So no overwritten case here using Filename  header.

When I try to hit the IFlow with XML, I have following file in SFTP ..${header.CamelFileName} is not carrying any dynamic value to the SFTP folder.

Though the headers carried dynamic Value to the SFTP Folder, we have issues with ZIP function as if CamelFileName header is not set before zip function, it generated a filename with {message-id}.zip

As you've created the CamelFileName header in the content modifier, there is no need to specify a FileName in the SFTP receiver adapter, see doc. You can leave it blank. Have you tried that? That said, you've specified an expression and it should evaluate it but it seems like it is not doing that for a reason. 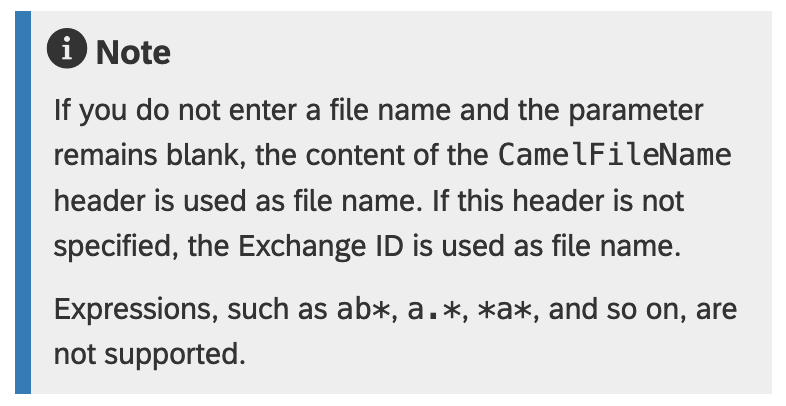