This blog post details the latest in my 100-day low-code, no-code journey, and hopefully provides some tips and tricks for you.

As Yogi Berra once said: Half of building an app is creating the UI, half is building the event handlers, and half is everything else.

Last week I discussed the UI (components), now I’ll discuss the event handling, which is done on the Logic pane. Whenever you click a UI element or the canvas (page element), you can click at the bottom of the page to open the Logic pane (if it’s not already open).

Once open there is a pane for creating a logic flow, starting with an event (e.g., user action or data change) that sets off a chain of flow functions that perform some action to the application (e.g., change data, display dialog, call API, and many others).

So for example, when a user selects a team from the dropdown field (bound to page variable selectedTeam), the event for a changed value in selectedTeam is triggered, which then calls a data source, which then puts the retrieved data in the data variable for the list of players.

For me, there were 2 things that were a bit confusing:

As far as I understand, here’s how it works:

Depending on which logic pane you’re on, you have access to different events. 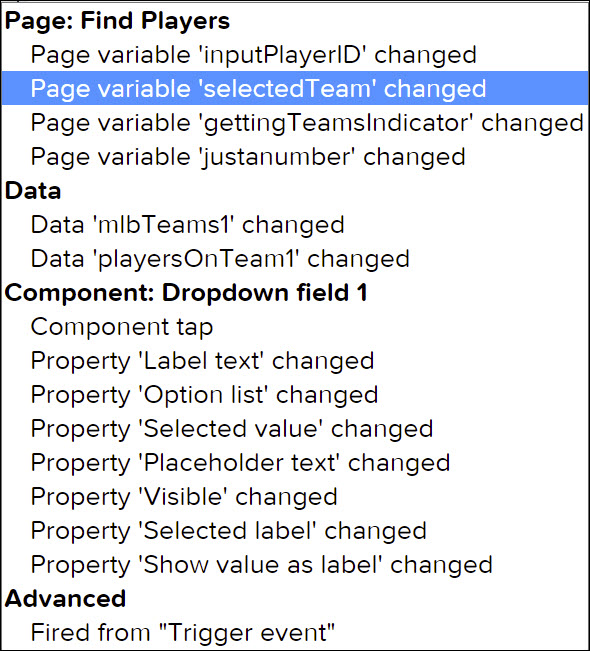 And since, for example, the page variable events are available from multiple logic panes, I could define event handling for those events in multiple places. I don’t know if I can see all my logic in one place.

On the Logic pane, by default there is a Receive Event flow function, already set to the default event for that component or page. For example, for a button, I get a tap event.

You can change the event you want to capture by going to the Event Source property in the Properties pane. Then you can drag and drop flow functions – actions you want to perform – and connect them to build a logic flow.

The flow functions panel works like the one at the top of the screen for the components. 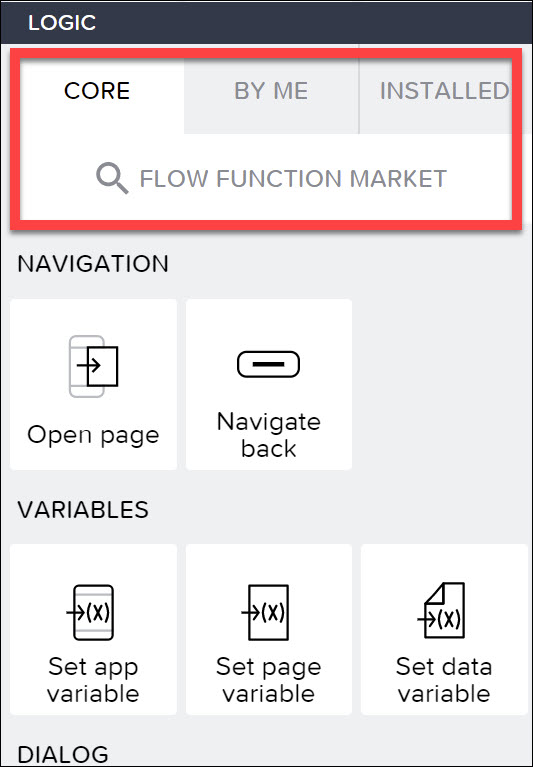 A reference of flow functions is here: https://docs.appgyver.com/reference/flow_functions

If for some reason you have removed the Receive Event flow function, you can scroll to the bottom of the Core tab and drag a new one on the canvas. 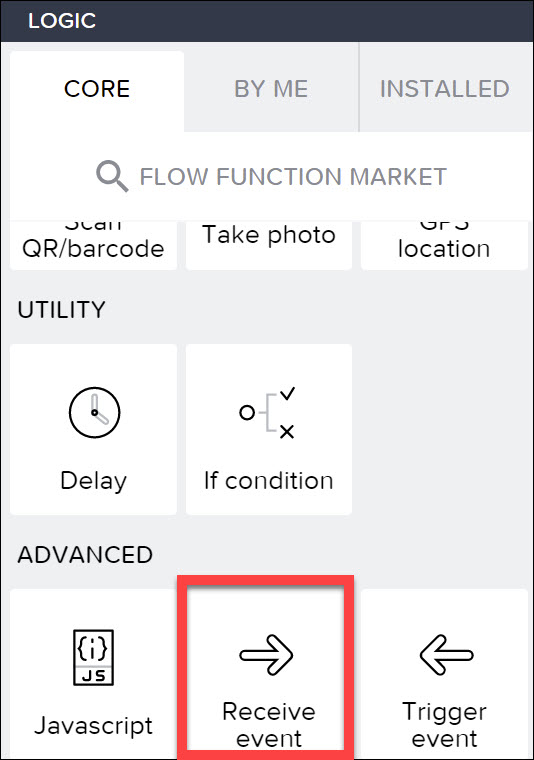 Though I’m not sure how often you will need, you should know you can create your own flow function … pretty much. You can either:

Let’s say I want to quickly be able to validate a number by:

Let’s assume I will want to do this in many apps and will need my own flow function. Here’s what I did:

Now that it was all set up, I clicked Overwrite local template.

If I click on my new flow function (or drag it into any Logic pane) and open the Properties tab, I could see my 2 new properties, one required and one not. 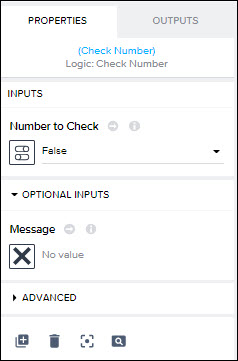 To use it, I just have to set the binding of these inputs. Cool!

In my app I had a problem: I wanted to display a player’s stats by year, but my API only had an API that returned for a single year, so I had to make a call for each year the player was in the major leagues.

In order to do this, I needed to get the start and end year for the player, and then create a list of years. Using this list, I created a logic that did the following:

For now, I want to just explain how I created my own custom JavaScript flow function to create the list of years.

I added a JavaScript flow function.

Inside a flow function, you need to define 3 things:

P.S.: Turns out, the API I was using DOES return statistics divided by year, if you don’t specify a year. But don’t blame me … blame the documentation. It said the parameter was required, so I didn’t figure out that I could omit it and the API would still work and return all the data. 🙄 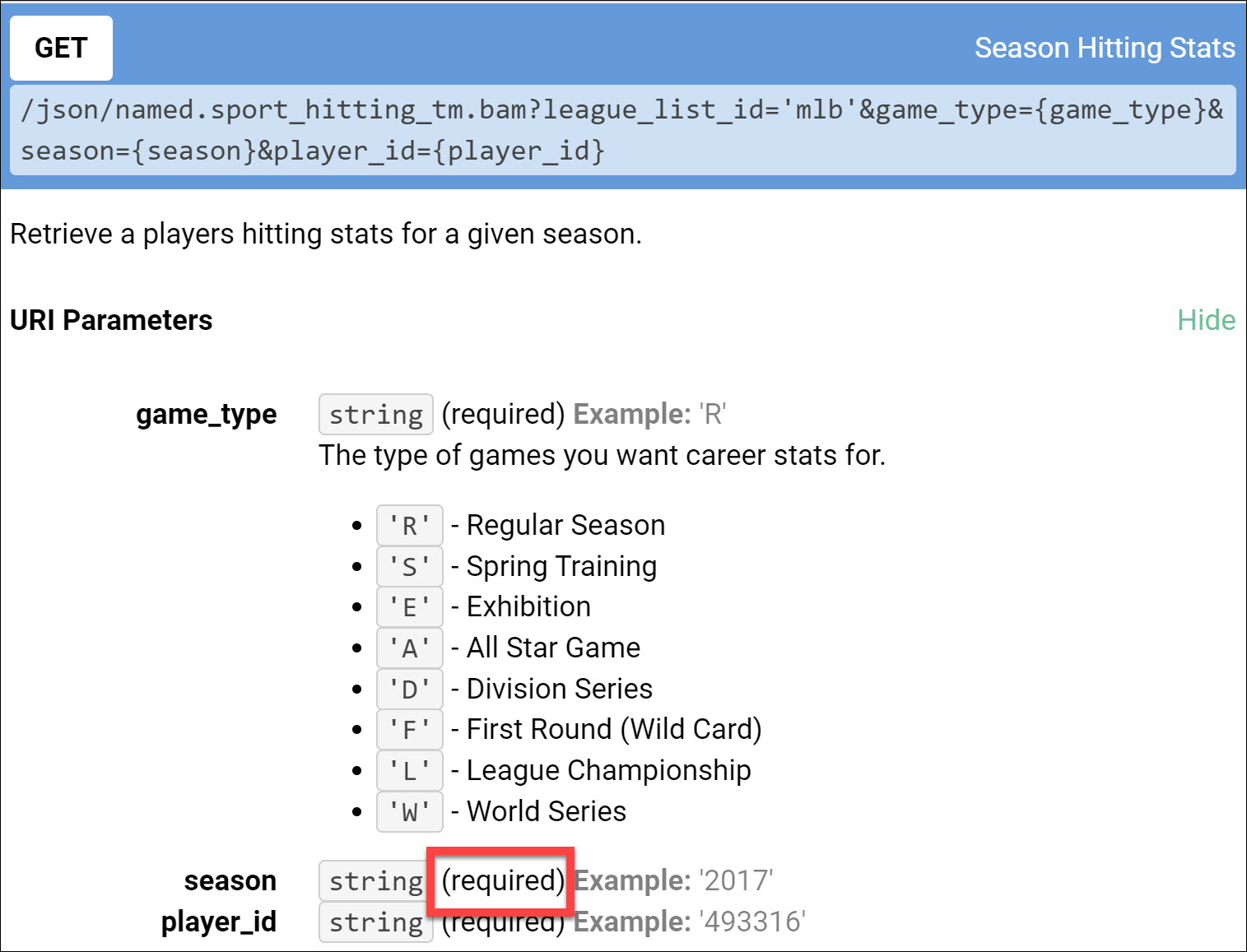 A few more words about the JavaScript function and outputs.

Each output can represent something different. A common pattern is that the first output is success and the second is failure. And in my code I can only send out values for one output, which determines the logic flow.

Though I can only send values for one output. I can define multiple properties for a single output.

So, to end the code and send data to a specific output, I added the number of the output (starting at 0 for Output 1) in the return statement.

If I defined multiple properties for an output, I can provide a JSON object with the values for each. There seems to be a bug where I must wrap my properties in a second object (below result) in order to provide multiple values.

And finally, I can access these outputs from a formula using the outputs object (“Get Years” is the name I gave to my JavaScript flow function).

You can go all-in on all the low-code, no-code tools and take the 18-hour, 8-unit low-code, no-code learning journey (SAP AppGyver, SAP Process Automation, SAP Work Zone) – and it includes a certification exam, if you are interested (fee) – which is part of the new SAP Learning. 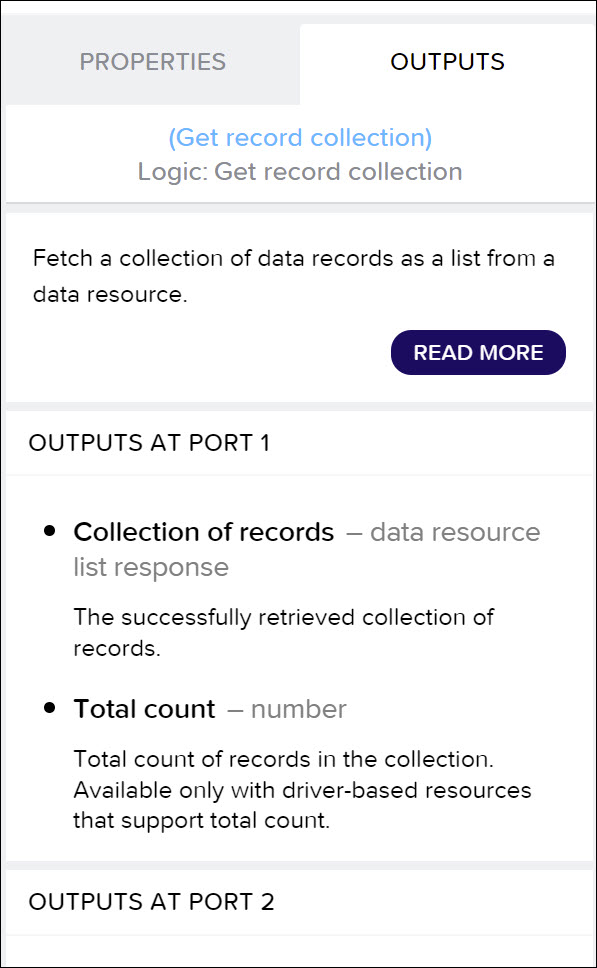 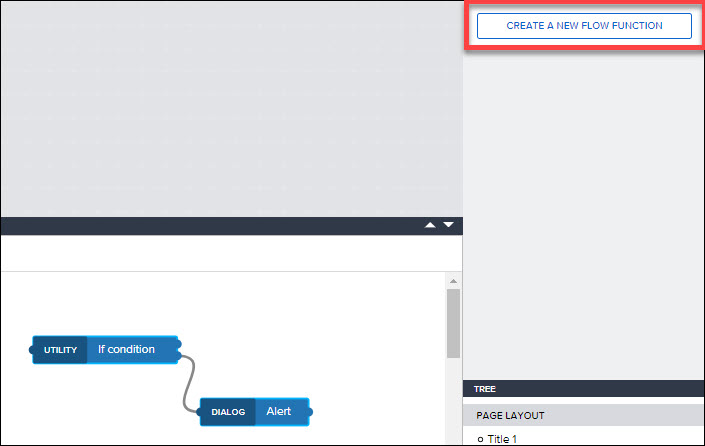 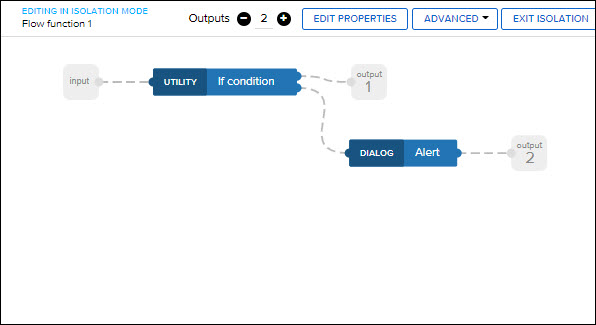