There many blog posts about OO principles. The reason for me to write also a blog post on this subject is because it can be a struggle to get out of all these blog posts a clear unambiguous understanding of the terms and the relationship between the terms. So this blog post is focused on how to remember them and the principles cohesion. And also to give some information about relative class names.

The basic OO principles are:

Instantiation is the “1” principle. The other 6 principles are split into 2 groups “3 + 3”.
These groups are “Access principles” and “Inheritance principles”.

So we have instantiation, 3 horizontally and 3 vertically principles.

Instantiation is creating an object instance based on a class.

Abstraction, Encapsulation and Data hiding are 3 principles which belong together.
The picture below shows the coherence between these terms. 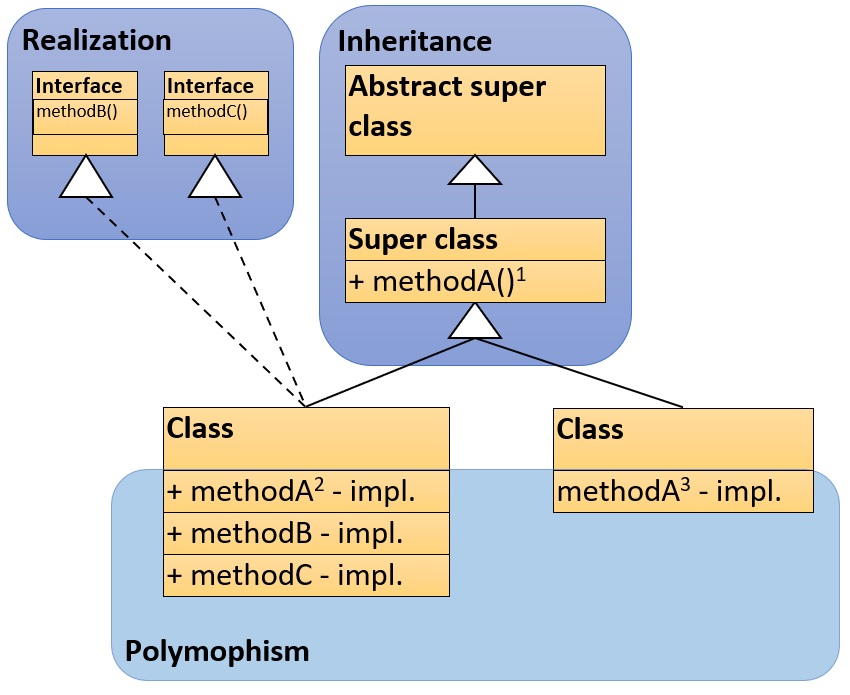 Relative class names have a purpose in relation to another class.

See also the graph below. The relative class names and the relations are mentioned.

In relation to inheritance also the terms abstract and concrete are used. An abstract class is a class which cannot be instantiated and a concrete class can be instantiated. For example you have a class Purchase Order and a class Sales Order and both inherit from super class Order. Order is too abstract to be instantiated, that’s why it is abstract.

In object hierarchy structures the terms parent and child are also used, which are than association relations. In this case I think parent en child class are very useful. 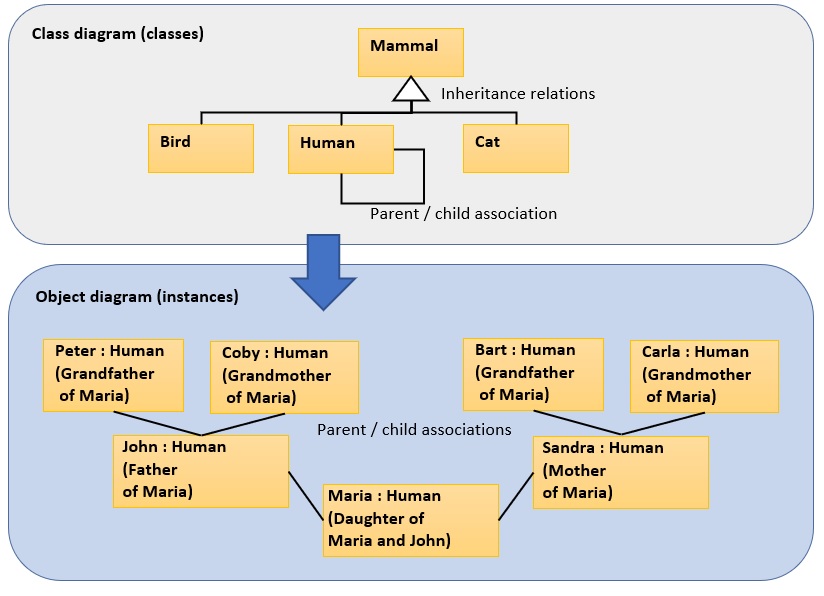 In real life we speak about inheritance when a child inherits characteristics from it’s parents.

In OO you could say that the mother instance created the daughter instance and set some properties based on her and John’s properties. But there are also properties which are random set. And that makes sense, because you might look like your father or mother, but you are not exactly the same. In many ways you differ from both.

Hopefully this helps that the terms parent class / child class might be confusing when using them for OO inheritance. It is purer to stick to the terms super class / sub class and compare it to “human class / mammal class”. 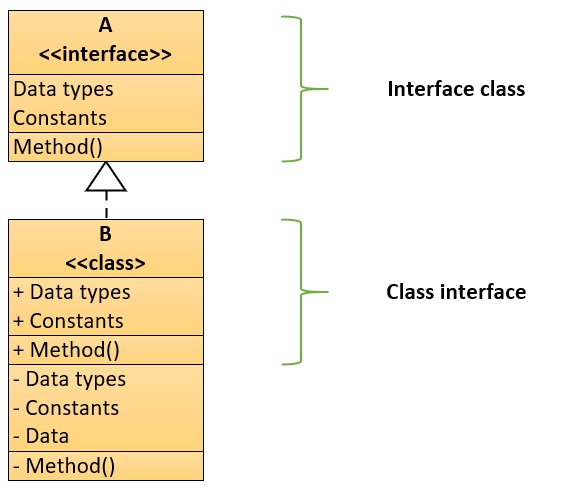 The complete class interface or parts of it can be pulled out of the public section into a Interface. The interface contains not the implementations of the methods. The implementing class will implement the Interface and that is called realization.

This series of blogs is very much like a university course on OO principles. I am not saying that is good or bad, just an observation.

In any event I would like to focus on this bit:

Now, how do I know my father was actually my father rather than the Milkman? Because I act like him (inherited methods) and look like him and went bald at exactly the same age as him whereas my mates whose fathers always had full heads of hair their entire life never went bald (inherited public attributes).

So in OO terms the usual example is that a CAT IS IN ANIMAL. In the same way, since my surname is hardy I can say that PAUL HARDY IS A HARDY since I am just like both my father and my mother (what some languages call multiple inheritance).

The point I am making is that is what the term "inheritance" was intended to mean in OO terms. Like many things (e.g. general ledger) we are speaking of a "digital twin" of a concept that exists in the real world.

To stretch the analogy a bit further I am a white Englishman, and when I moved to Australia I married an Aboriginal woman and "inherited" two children.

So when I walked into the pub I am a six foot tall chalk white weedy UK guy, and my son was seven foot tall jet black aboriginal guy rippling with muscles and I would say to say to the barmaid "This is my son - doesn't look much like me does he!"

This is very rambling and I am sorry. I am signing off now.

It is probably best not to explain concepts in university level/mathematical terms but rather by analogy. As an example....

The world - this is where the PUBLIC components (data / behaviour) of a class (or the interface, which is where all public methods attributes should be declared)

Your family - this is where PROTECTED components should be declared, that can be used by children of the main class

Just yourself - this is where PRIVATE components should be declared. What you think and do in private can change as much as you want, and to the public you are just the same as ever.

Your opinion triggered me to add paragraph “Parent / child example” to go deeper into this topic with an example. To me it is important that a "digital twin" is as close to a comparison as it can be and is as less confusing as possible. So to me the ”digital twin” of OO inheritance is Super class Mammal and Sub class Human and not Parent / Child.

Thank you for your opinion.